Indian farmers have always struggled with reducing wastage of their produce due to a variety of reasons, including rickety market linkages and lack of facilities to store fast perishable items for any length of time. Food wastage in South and Southeast Asia is nearly 40%, according to estimates by the Food and Agriculture Organisation.

This has severe implications in India, where more than 80% of the farmers are smallholders who barely manage to eke out a living, earning less than USD 1,000 a year.

One way to reduce wastage is to have air-conditioned warehouses where perishable produce can be kept. But there are  many issues with that too. Power supply in rural areas is unreliable, with frequent outages. Also, it has been found that as much as 30% of the total expense of cold storage is energy costs.

As a result, India has abysmally low numbers of warehouses where food can be stored at a low temperature. In recent times, however, solar-powered cold storage has started making inroads in the countryside. 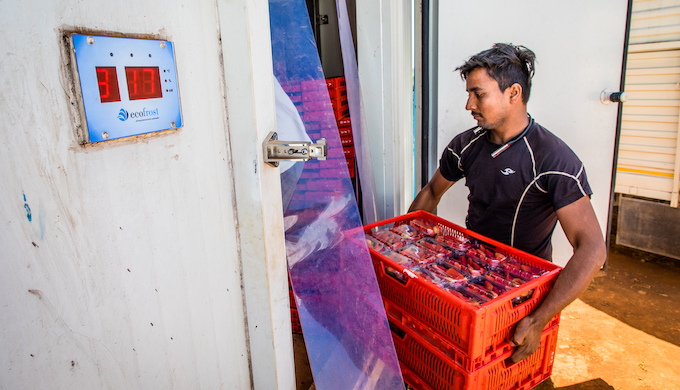 Storing produce cheaply in solar-powered cold storages at the farm gate is a boon for smallholder farmers. (Photo by Ecozen Solutions)

Even as the government’s solar irrigation programme moves ahead, entrepreneurs and investors are increasingly turning their attention to unlocking greater value for farmers with innovative solutions powered by solar energy. Apart from drying food, markets include refrigeration, keeping livestock feed fresh, milling and other parts of the farm value chain.

The solar power market in India is expected grow at a compounded annual growth rate of more than 40% between 2020 and 2025 on the back of government policies and the declining cost of solar modules, according to Mordor Intelligence, a market research firm.

Innovations by research institutes and companies have been of immense help as well in furthering the cause of solar cooling.

Another company, Ecozen Solutions, recognised for developing solar cold rooms, won an Ashden award in 2018. Recently it was in the news again for developing a modular  version (SKD) of its cold room, which can be reassembled, andis energy efficient.

“The idea of an SKD version of Ecofrost was to increase accessibility and affordability. We call it the Ecofrost Link,” said Devendra Gupta, CEO and co-founder, Ecozen. “It is a standalone cooling system designed to convert pretty much any insulated room into a solar-powered cold room. Being modular in nature, it can be customised for variable room sizes too.”

A SKD kit has the advantage of being easier to move to remote locations. This makes Ecofrost economically viable, which in turn is passed as a benefit to customers, Gupta said.

“We were also receiving queries from customers about converting their existing storage rooms into solar cold rooms, which now is a possibility with Ecofrost Link,” he said. 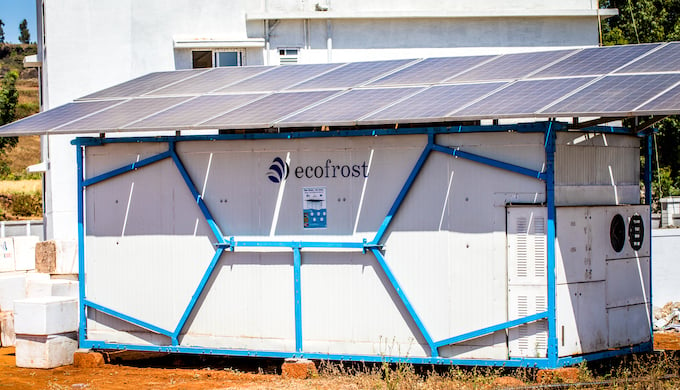 The decentralised cold room, powered by solar energy, will help Indian farmers reduce wastage and get better prices for their harvest. (Photo by Ecozen Solutions)

The Ecofrost Link is also advanced in terms of energy efficiency, refrigerant technology, cooling, data monitoring and system intelligence. The essential upgrade is  the thermal energy storage which has been given a complete makeover.

It has moved on from the earlier “plates-on-walls” model to becoming an integral part of the evaporator, delivering more operational control while retaining higher efficiency.

For marginal and low-income farmers, this makes having a cooling solution on farms affordable and the profitability achieved from selling high quality produce covers the interest on the loan they take to install the storage facility.

Initially, the response was not encouraging as customers were still learning about the idea, Gupta said.

“But now, it has started to pick up and is witnessing a good adoption rate among farmers and perishable distribution companies. Our lease model contributes to about 15% of total units on field today,” he said. “We are currently working with more finance partners and non-banking finance companies to scale it up.”

The model enables farmers to access pre-cooling at their farms for around INR 1.5 (USD 0.02) per kg, compared with market grade pre-coolers that charge in the range of INR 3 to INR 3.7 per kg, he said.

Currently, Ecozen products are functioning in 35,000 farms, potentially saving 35,000 tonnes of perishables from going waste. At the same time, these modules have generated 100 million kWh of clean energy.

Ecozen is in the process of building a smaller version of their product to make it easier for smallholder farmers to afford one.

“We are prototyping a smaller version, backed by thermal energy storage (which is better than Li-ion energy storage for cooling application),” Gupta said.

While the current version has the capacity to store 5,000kg of farm produce, the smaller model will hold 2,000kg. This will enable the company to reach more farmers.

Ecozen has also introduced the concept of Eco-connect, which connects farmers to markets.

“We help them pre-cool the commodity, connect them with buyers and enable them with logistics as well to reach buyers in more markets,” Gupta said. “By using the cold chain, they can compete with air logistics and reduce logistics cost substantially.”

“We believe the smaller unit, combined with Eco-connect, will be a game changer for perishables handling and trade,” Gupta said. “It will also enable consumers to get these commodities in a fresher condition, and in the long term, it will enable farmers to increase production owing to an increase in their market access and demand.”

Opinion: Protecting coasts can give BIMSTEC an urgent sense of purpose

Caste tensions at depleted Kanwar lake ahead of Bihar elections