“The age of climate panic is here. It is O.K., finally, to freak out,” wrote David Wallace-Wells, author of The Uninhabitable Earth, in a recent New York Times op-ed, echoing the words of the Swedish teen and climate activist Greta Thunberg, addressing suited delegates at Davos: “I don’t want you to be hopeful. I want you to panic.”

“It’s worse, much worse, than you think,” begins Wallace-Wells’ new book, the latest statement on the climate calamity we find ourselves confronted with.

“We have burned more fossil fuels since the UN established the Intergovernmental Panel on Climate Change than in all of the centuries before. So we have done more damage knowingly than we ever managed in ignorance. That is a horrifying fact. It also means we are engineering our own devastation practically in real time,” writes the deputy editor of New York magazine.

Wallace-Wells admits he is no environmentalist, he’s does not like camping and spent his life up till now “fatally complacent” or “willfully ignorant’ about climate change. But he started collecting climate change stories and reading a lot of alarming scientific papers and was shocked by how the media coverage was so divergent from reality.

In 2017 he wrote a landmark article on climate change looking at worse case scenarios for global warming. He has now elaborated on this in a lengthy book expounding the living nightmare that lies ahead of us if we do not dramatically change our course.

While his conclusions reflect IPCC warnings – that we have 12 years left to cut emissions by half if we are to have any hope of avoiding catastrophic climate change – his prose is, thankfully, far more compelling.

In the opening of the book, he sets out to dispel popular myths about climate change. The first is that climate change is slow, unfolding over centuries and we have time to time to find solutions. We do not. “We’re now speeding blindly on a course to more than 4 degrees of warming by the year 2100, having brought the planet to the brink of catastrophe within the lifetime of a single generation,” he writes.

The second is the scope of the problem. Climate change isn’t an issue of arctic ice and sea level rise, of imperiled polar bears and floods displacing people in far off places (or at least far off to the developed country audience he is writing for). It means starvation, displacement, war, cities under water and major droughts and disease in our lifetime. We are just beginning to learn how much bigger the problem is.

Already at 1.1 degrees of warming now, we are already seeing a rash of extreme weather and natural disasters and loosing wildlife at such a rate we are experiencing what many scientists call a “sixth extinction”. 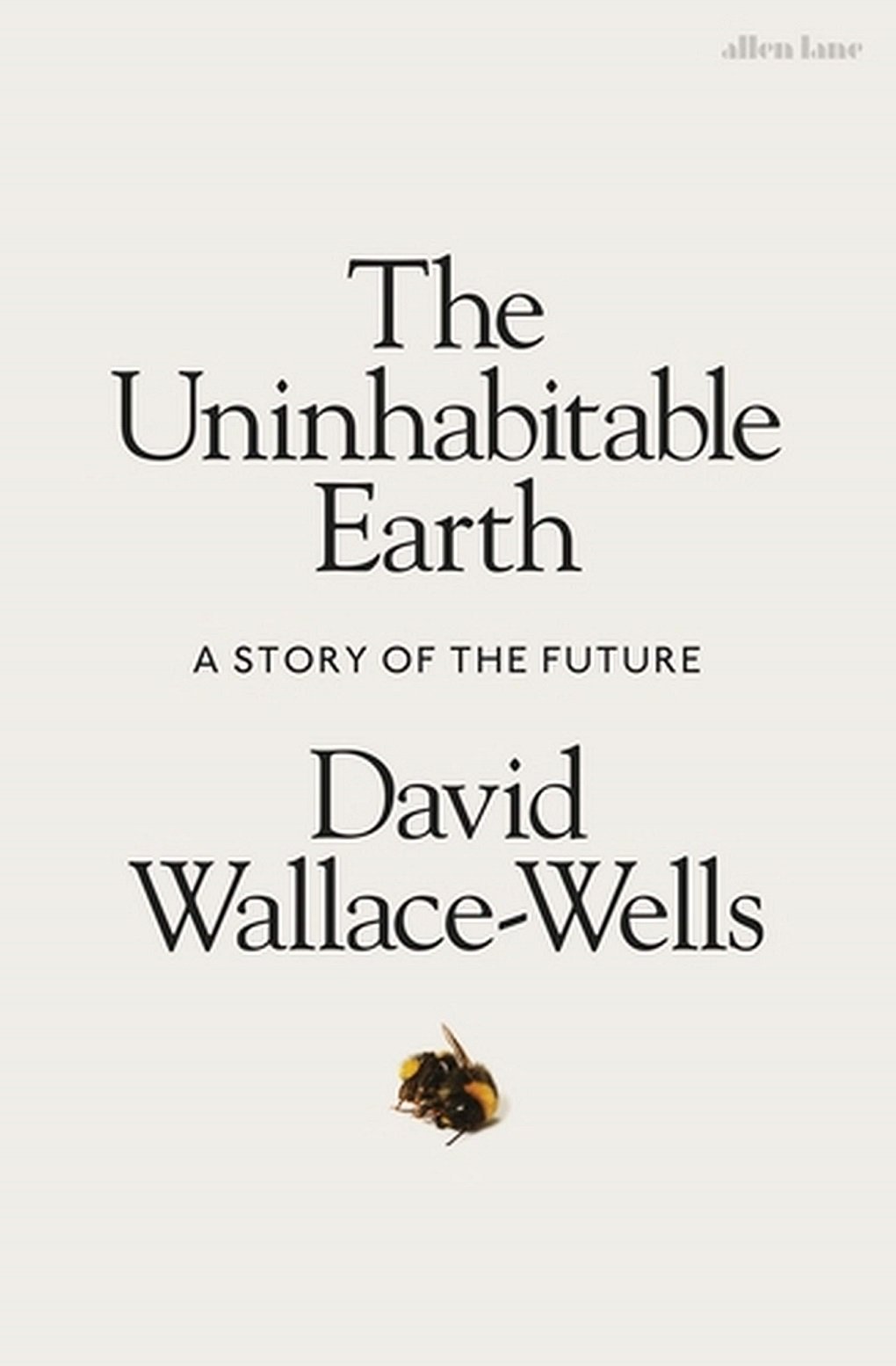 But there’s much further to go. Such calamities mark the end of normal, as climate change tips Earth beyond the conditions that allowed us to evolve in the first place.

At 2 degrees the ice sheets will collapse, major cities in the equatorial band will become uninhabitable and heat waves will kill thousands every summer even in the northern latitudes. At 3 degrees, southern Europe would be in permanent drought while hundreds of coastal cities including Miami, Dhaka, Shanghai and Hong Kong would be under water. At 4 degrees the planet’s topical forests are transformed into a fire-dominated savanna, global damages reach over USD 600 trillion, conflict and warfare double and so on.

As the author emphasizes, this is not a story of the future (although, strangely enough, that is the subtitle of the book). Much of the horror is already with us – drought and water scarcity in South Asia, Day Zero in Cape Town, increasingly violent storms and hurricanes, deadly toxic air across much of Asia, microplastics in the ocean, our food chains and our own bodies. If we do nothing about carbon emissions whole regions will become unlivable by any standards we have today by the end of the century.

While the prose is elegant, the dizzying barrage of statistics and probabilities threatens to numb even the most engaged reader.

“If you have made it this far, you are a brave readers. Any of these twelve chapters contains, by rights, enough horror to induce a panic attack in even the most optimistic of those considering it,” admits Wallace-Wells.

Wallace-Wells, however, remains surprisingly upbeat. If humans are responsible for the problem they must be capable of undoing it, he surmises.

The second part of the book is more whimsical, exploring how climate change will transform every aspect of our lives, society, pop culture, technology, mental health, our political systems, the way we imagine our future and make sense of the world.

Wells calls himself “an end of history kid” – an American who grew up with the firm belief that history marks progress – and that history was marching towards a liberal democracy with every generation deserving a better quality of life than the last.  But now with climate change, the 21st century is likely to be a major step backward for the wellbeing of humanity.

What emerges from the ashes?

Is it moral to have children in these conditions? asks Wallace Wells, who had a daughter during the period he wrote the book. How will “widespread alarm shape our ethnical impulses towards each other” and what “new politics will emerge from those impulses” are among the more profound questions being posed by climate change, he muses.

But this is not a book of solutions.  Wallace-Wells dismisses the power of individual choices. Choosing to eat vegan burgers, or sip out of reusable straws will not make much difference. Vote for leaders who understand the scale of the crisis and make climate change their main priority, he urges. If you are worried about inequality, war, job creation, mobilise to put pressure on leaders to make changes of the scale we need.

But what new kind of politics will evolve after the promise of growth recedes? Again, Wallace-Wells is evasive. As the need for cooperation becomes more urgent, we are unbuilding alliances, retreating into tribalism and nationalism and away from collective responsibility.

For Wells, China holds all the cards on climate change.  How fast China transforms its industry, agriculture and consumer preferences – as well as the shape of its Belt and Road Initiative through which it has positioned itself as a major provider of the infrastructure industry, energy of the development world – will determine the climate shape of the 21st century. As will the course taken by other major economies such as India, Nigeria and South Africa.

He hopes China’s “quasi authoritarian” model will be more effective than liberal democracies. He finds solace in the green rhetoric of Xi Jinping and the positive progress China is making on renewables and imagines that the country will take on something more than narrowly national powers over climate policy, which other countries can fall into line behind.

This may seem naïve, given the painful stuttering of China’s transition away from fossil fuels, and the rise of regressive climate policies among the “strongmen” leaders of today – from Bolsanaro in Brazil to Trump in the United States.

Other sources of hope are emerging, as young activists show no reticence in calling out potential doom. We have seen growing momentum behind the school climate strikes worldwide and the rise of the Extinction Rebellion movement, calling for the UK government to declare a state of emergency. The rhetoric around the young US Representative Alexandria Ocasio-Cortez’s Green New Deal is also catching on. These movements bring home the intergenerational injustice of our crisis, with young people left to pick up the pieces after decades of stalled action.

As we stare down the possibility of complete social collapse, I hope there is a sea change taking place, and that can we make it move fast enough.

Roundtable: How will the world stem global biodiversity loss?

Interview: Being a wildlife biologist in the Eastern Himalayas

Between tradition and trafficking: opium in Arunachal Pradesh