Countries in South and South East Asia will need to urgently consider how to reverse their current trend of expanding coal-fired generation capacity and how to implement policies to enable a fast decarbonisation of the electricity mix, phasing out coal for power generation by 2040, says global think tank Climate Analytics.

Both regions have vast renewable energy potential that is still largely untapped. Full decarbonisation of energy systems in countries across these regions would yield multiple benefits for sustainable development, in particular through increased energy security and access to affordable, clean and modern energy for all. In addition, the avoided air pollution damages and environmental degradation (including water use and land contamination), through switching from fossil fuel systems to renewable are substantial.

A new report by Climate Analytics, the first to apply the insights from the 2018 Intergovernmental Panel on Climate Change Special Report on the 1.5˚C global warming limit to these regions, shows how Asia’s energy systems can transition to zero carbon.

In order to meet their pledges made for the 2015 Paris Agreement, governments in South and South East Asia will need to decarbonise their energy systems by 2050. This, says the think tank,  is possible with a rapid increase of renewable energy use, in particular in the power sector, and decarbonisation of end use sectors such as industry or transport, through electrification or direct use of renewable energy, as well as large demand reductions through increased efficiency and improved infrastructure across all end use sectors. 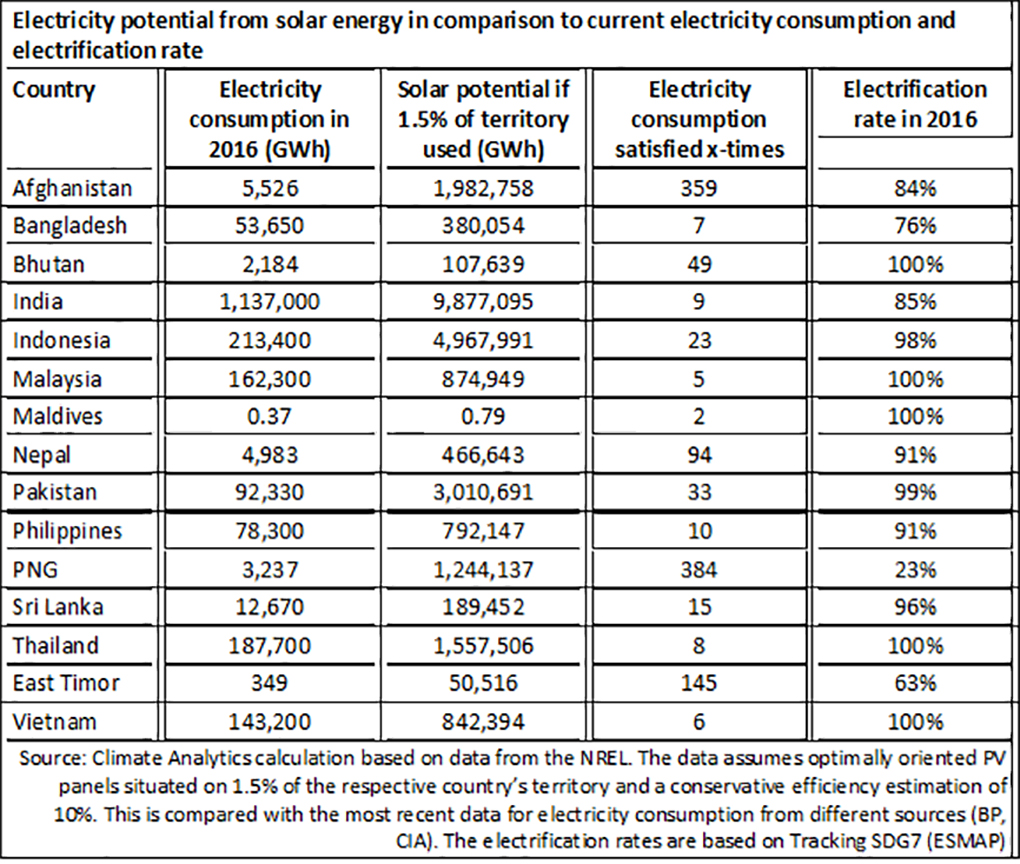 For the world to limit warming to 1.5°C, South and South East Asian countries need to decarbonise their energy systems by 2050 and the power sector has a critical role to play. According to the study, the share of zero carbon electricity generation needs to reach at least 50% in 2030 and 100% by 2050. Coal would need to be phased out of electricity generation by 2040.

But several South and South East Asian economies are planning to expand their coal plant capacity rapidly, despite the need to phase out coal-fired power by 2050 globally. Together countries in these regions account for half of the world’s planned coal power expansion, with India, Vietnam, and Indonesia alone accounting for over 30%. An important share of these plans comes from emerging economies whose energy systems have not heavily depended on coal in the past. These include Bangladesh, Pakistan, Philippines, Thailand, Myanmar, Cambodia, which together account for over 13% of the planned expansion of the global fleet.

The present plans for major new coal deployment in the region would endanger the achievement of the Paris Agreement as well as many of the Sustainable Development Goals in this region. As a consequence of coal power capacity additions, greenhouse gas (GHG) emissions have been increasing steadily in the region in the last 30 years.

The 176 GW planned coal capacity expansion for the countries in both regions will result in either a large number of stranded assets or emissions exceeding emissions budgets consistent with Paris Agreement’s goal.

India has huge untapped renewable energy potential, says Climate Analytics. Using a small fraction of its land for solar PV installations would generate seven times as much electricity as is currently produced. India takes advantage of only slightly over 10% of its wind energy potential.

The costs for solar and wind energy in India are among the lowest in the world. Despite the significant decrease in costs, installation of renewable energy projects (e.g. solar rooftop capacity) is lagging behind the government’s plans.

With a rollout of renewable energy, even under a conservative scenario for 2030, estimates show savings between USD 45 billion and USD 160 billion each year from reduced air pollution, a decrease the demand for coal and oil products by about 17% to 23%, 3.5 million jobs in the RE sector, GDP increase of 1% above the reference case, and avoided climate impacts by 2030 amounting to USD 13 to 63 billion every year. 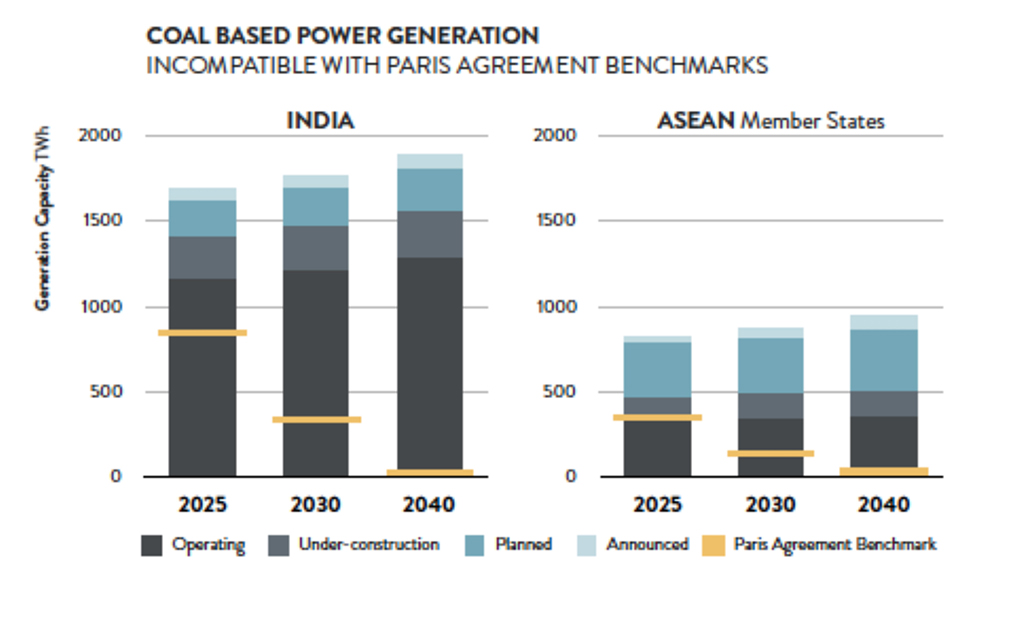 Beyond these benefits, renewable energy technologies offer opportunities to improve the access to electricity in poor and especially remote areas, contributing to the fight against energy poverty and offer alternatives to thermal power plants, thus avoiding additional emissions and water stress.

India is a significant contributor to global GHG emissions (7% in 2016), though per capita emissions levels are well below the global average. India’s carbon dioxide (CO2) emissions per capita have risen from 1 to 1.92 metric tons of CO2 between 2000 and 2016, but remain low compared with the world’s average of 4.8 tCO2. With almost a fifth of the population still lacking access to electricity, how India chooses to address its growing energy demand has important implications for the global efforts to combat climate change, say the authors of the report.

India has a strong market mechanism to control CO2 emissions, in the form of a coal cess. Introduced in 2010 at USD 0.8 per tonne, the coal tax was steadily increased to USD 3.2 per tonne in March 2016. It resulted in combined proceeds of USD 12 billion between 2010 and 2018. But at the same time, subsidies to coal amounted to USD 2.3 billion in 2016, according to a 2018 study by the International Institute for Sustainable Development.

Covering 1.5% of the India’s land surface with solar PV would result in 9.877 TWh of electricity only from this source – equivalent to seven times the total electricity generation in 2017, according to British Petroleum and the National Renewable Energy Laboratory of the US government. According to another estimate, covering 3% of the country’s wasteland with solar power plants would result in an installed capacity of 750 GW or twice the installed capacity at the beginning of 2019, according to India’s Central Electricity Authority and the International Renewable Energy Agency (IRENA).

The massive expansion of coal power plants under planning is completely inconsistent with the Paris Agreement, which Bangladesh has signed. Its Power System Master Plan provides projections of the share of coal in the electricity mix until 2041. The share of coal is projected to see a large rise from 1.81% in 2017 to 35% by 2041. 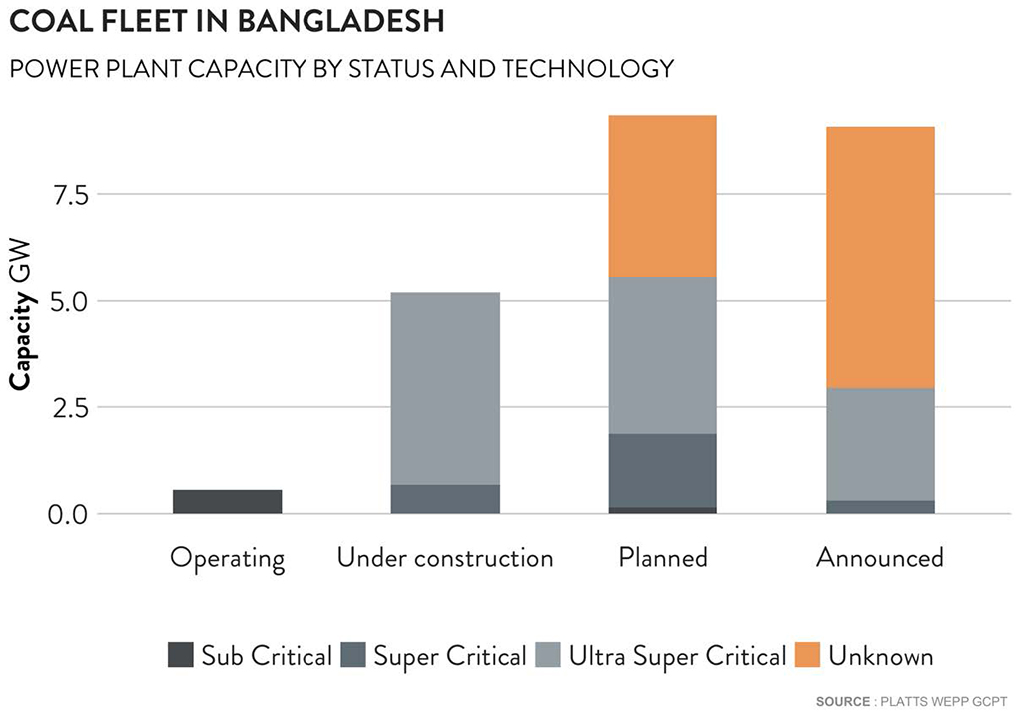 Bangladesh has modest solar potential compared to other countries in the region. However, covering 1.5% of Bangladesh’s land area with optimally oriented PV panels could potentially generate 3,080 TWh of electricity, which is equivalent to seven times the total consumption of electricity in 2016.

Pakistan: Getting wedded to coal

The share of coal in Pakistan’s electricity production has remained low, even decreasing slightly, as oil and gas are the predominant fuels. The utilisation of solar and wind energy resources is limited, with installed capacities representing a mere 1.5% and 3% of the total installed capacity respectively.

Pakistan is undertaking a major expansion of electricity generation capacity to meet growing demand, as energy access progresses. Current expansion plans include a massive growth in coal capacity, in an effort to overcome the overreliance on imported fossil fuels.

See: No end to coal in Pakistan

Construction of these coal power plants could lock in Pakistan’s energy system into a carbon intensive path for decades and would be a huge missed opportunity for building a carbon-free and climate-resilient energy system that would be compatible with the achievement of multiple Sustainable Development Goals, says Climate Analytics. 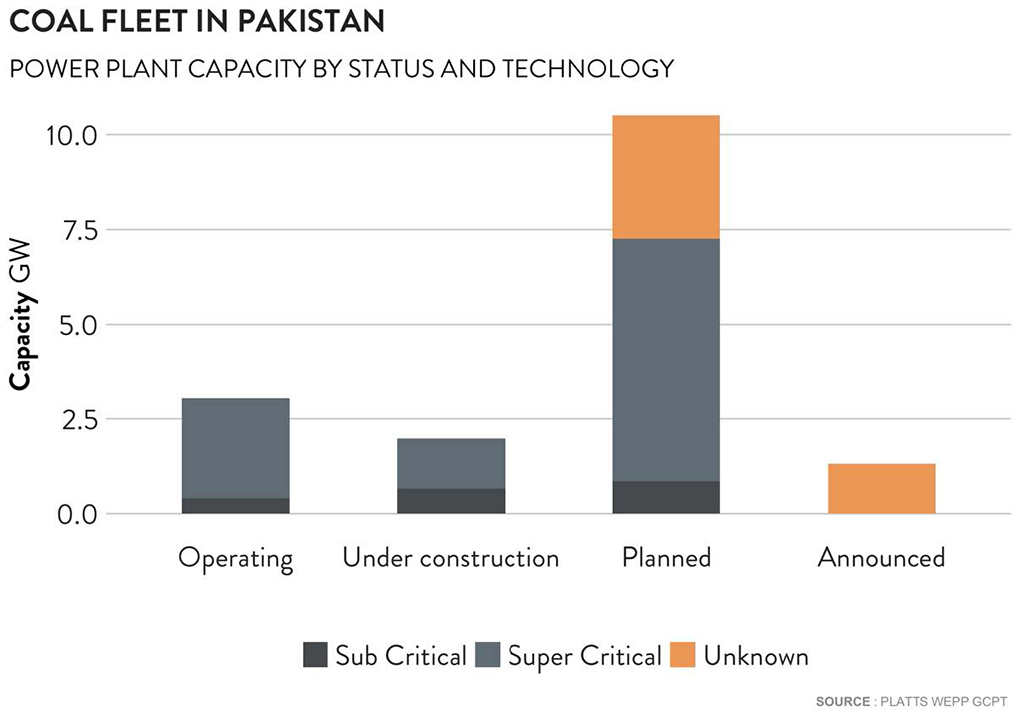 The committed emissions from coal-fired power plants are likely to peak only by 2055, with an eventual phase-out only by 2061, reflecting the large expansion status relative to the existing capacity. This far exceeds any Paris Agreement compatible pathway for the energy sector.

Pakistan has a dedicated ministry of climate change, which recently has fulfilled its commitment of planting one billion trees in one of the provinces, and the government is undertaking another ambitious plan of planting 10 billion trees across the country, taking pride in the fight against climate change. Simultaneously however, it is planning to increase the share of fossil fuels in its energy mix manifold, hence undermining all its climate friendly initiatives.

The advantages of RE

Limiting global warming to 1.5°C in line with the aspirational goal of the Paris Agreement is of crucial importance for both South and South East Asia. A greener economy would reduce impacts for these regions by:

“The 1.5°C limit means greatly reduced risk of drought and water stress in South and South East Asian, which would contribute to achieving zero hunger, good health and wellbeing, and clean water and sanitation,” says Fahad Saeed, a Pakistani-origin scientist at Climate Analytics.

Shafqat Kakakhel, Chairperson of the Board of the Islamabad-based Sustainable Development Policy Institute (SDPI), said, “Pakistan must make determined and sustained efforts to achieve the decarbonisation of its energy sector. This would require abandoning the plans for coal-fired power plants.”