Zarine Khan, a resident of Khyber Pakhtunkhwa’s (KP) Haripur district, has been involved in beri honey farming for the last two decades. But what he has witnessed in recent years has left him devastated. “Last year was especially destructive,” he said. “My income is at a dead end and the loss is irreparable.”

Erratic rainfall and mass deforestation have severely affected the bloom of the Ziziphus mauritiana or beri tree — the main food source for the honey bee population — resulting in a decline in honey production. While the price of beri honey in the market is soaring, the exporters made deals months ago, based on lower prices.

According to the Trading Development Authority of Pakistan (TDAP), 90% of the beri honey produced in Pakistan is exported. Now the sellers cannot meet orders, while farmers are only paid at earlier rates, far lower than the current market rate.

In a country which is considered one of the major honey producers in the world, the decline in production and exports of the highly coveted beri honey has dealt a significant blow to the industry. 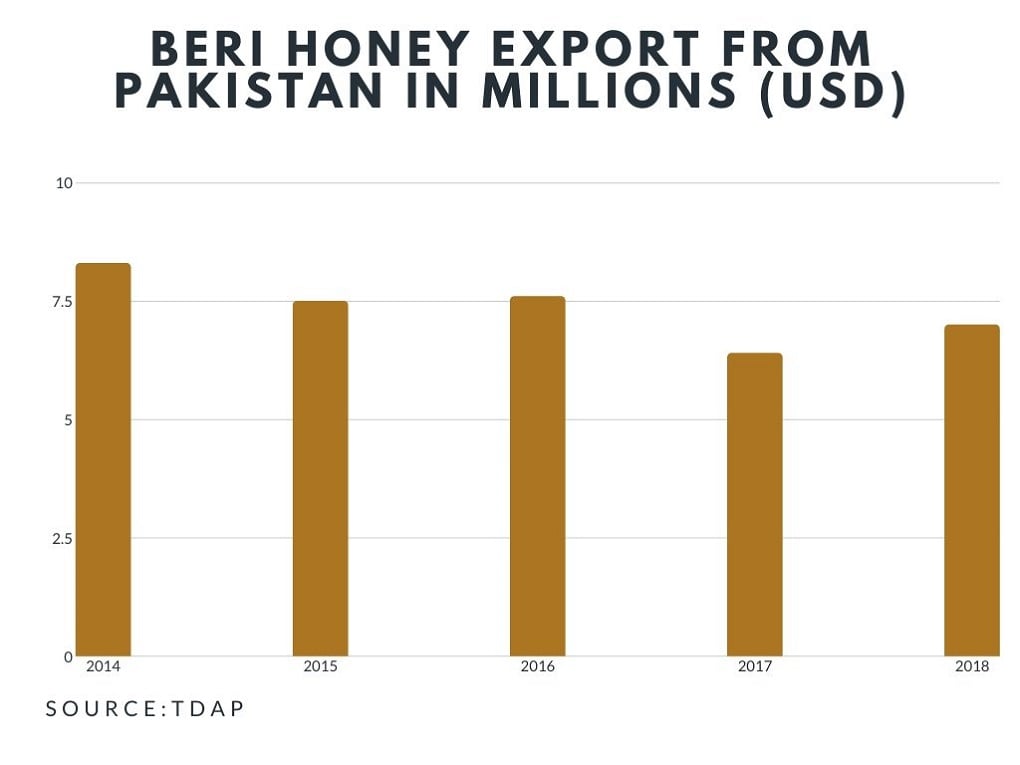 Prices of beri honey have reached unprecedented heights in the wholesale market at nearly PKR 100,000 (USD 600) for 50 kilograms. This year, due to deforestation, climate change and mismanagement, it is an even bigger disaster.

Although different flowers such as acacia, orange, lychee, mustard and sunflower are used as food sources by honeybees to produce nectar, the most sought after variety is the beri honey which comes from the nectar in the Sidr trees from Pakistan’s mountain regions.

The reddish-brown honey with a thick texture and fruity flavour is popular due to its unique taste.

In some countries, beri honey is believed to have health benefits and is promoted as natural medicine. In the United Arab Emirates (UAE), it is commonly used in breakfast and with milk.

According to the Pakistan Agricultural Research Council, beekeeping is a profitable business in the country, with around 7,000 registered beekeepers rearing the Apis mellifera or western honeybee in modern beehives. Nearly 300,000 colonies produce 7,500 metric tons of honey each year. Previously, honeybee flora present in Pakistan’s north could support one million honeybee colonies.

However, the impact of climate change and loss of forest have resulted in a reduction in these colonies. Zarine, who owns 200 honeybee boxes, said previous honey yields of 5 kg per box have now dropped to a mere 1 kg. Simultaneously, profits of USD 19 to USD 32 per box have fallen by 40%.

“For beri honey, honeybees access the blooms from the Ziziphus Mauritiana, which is locally called beri, from mid-September to mid-October.” In the last season, unexpected rainfall destroyed the blooms of the beri tree, which are the main food source of the honeybee. Bees collect the nectar from these blooms and break it down into simple sugar inside the honeycombs, where the thick, sweet substance is collected over time.

In the 1990s, the beri honey season would last a full two months from mid-August to mid-October. With higher temperatures, this season has been reduced to just one month, between mid-September and mid-October. If the season is interrupted by rain, the bees have nowhere to go.

This correlates closely to the work of experts who say that the changes in habitat and biodiversity, coupled with increasing use of chemicals and pesticides, have led to a sharp decline in bee populations in the Hindu Kush Himalayan region. Pakistan is not alone in this regard, with bee populations suffering decline across the world since 2006. As 90% of plants depend on insects to pollinate and reproduce, the drop in the number of bees has impacts beyond the production of honey. In China some farmers have been forced to hand-pollinate plants.

Deforestation, too, is a major factor in lowered production.

Sher Zaman, general secretary of the All Pakistan Beekeeper Exporters and Honey Traders Association, said habitat loss has resulted in lower density of trees. “Ten to 15 years ago, when we went to KP’s Karak district for farming, we found healthy, old trees which produced great results. Today, 75% of them are gone because of deforestation.”

For a good yield, the ideal farm must have 20 trees, Zaman said. “Unfortunately, there are fewer trees in the area now and each farm has half the number of trees, so production suffers.”

Zaman said the quality of the honey is deeply connected to the health of a tree, as an older and healthier tree will bear good quality blooms and so the honey produced by the bee will also be of a superior quality. “But now, despite travelling to different areas, we don’t find old, healthy trees.”

Along with farmers, exporters of honey are suffering. Of the honey produced in Pakistan, only 20% is sold in local markets.

Khalid Khan, a food exporter, said his main export to the United Arab Emirates (UAE) is beri honey. Pakistani beri honey is one of the most sought after items in the UAE, he said.

“Every year, I earn a reasonable profit [from beri honey export] but in the last season, due to reduced production, the price reached a record high. This brought heavy losses to me. I delivered my consignment at a 20% loss only to retain my UAE clients for future transactions,” said Khalid.

According to figures shared by the All Pakistan Beekeeper Exporters and Honey Traders Association, regular honey production results in the export of 200 shipping containers from Pakistan annually. Each container carries 18,000 kg of the prized honey.

This year, however, beri honey exports plunged to 130 containers. This also affects the fate of the honeybee farmers. “There are 7,000 farmers registered with the association but [in reality] up to 40,000 work at the farms,” said Zaman.

He said that while the wholesale beri honey had an average price between USD 189 and USD 315 for 50 kg, in the last season this skyrocketed to between USD 441 and USD 659 owing to the record drop in production.

Exporters suffered huge losses as they had made deals with buyers six months earlier when the price was lower.

Zaman said honey farming, and beri honey farming in particular, is still a profitable business, as international demand is high. But a loss in local production and soaring prices will have a huge impact on the industry.

Noman Rasheed, the former assistant director of the Environment Protection Agency (EPA) in KP, said the issue is compounded by the government’s neglect.

“It is unfortunate that Pakistan is rapidly losing its natural sources without even realising their utility,” he said.

According to the KP forest department, during the government’s much-touted ‘billion tree’ plantation campaign, less than 1% of the 240 million trees were of the Ziziphus variety.

Surprisingly, eucalyptus —which was banned in Pakistan — made up 12% of the plantation.

“Planting the eucalyptus and neglecting the native and beneficial Zizyphus clearly shows that the ‘billion tree campaign’ was done without any proper planning,” Rasheed said.

It is the combination of this poor management with the ongoing threat of climate change that is resulting in huge losses for farmers.

“Climate change is a reality for Pakistan, and it badly needs more research in the field of agriculture,” Muhammad Younas said. “We are training farmers but in the fields of research and adaptation we have a lot more work to do.”

Money to revive Nepal's Tinau river, but no laws