Saquib Ali is an apprentice at Hi-Tech Electronics, one of a string of shops in Karachi’s Defence commercial area that specialise in repairing household appliances like air conditioners and refrigerators. “Most of my work comprises filling [appliances with] gas,” said Ali.

The “gas” he referred to is usually some type of hydrofluorocarbon (HFC), used as a refrigerant in fridges, deep freezers and ACs. As Pakistan’s summer months approach, his days have already become busy. 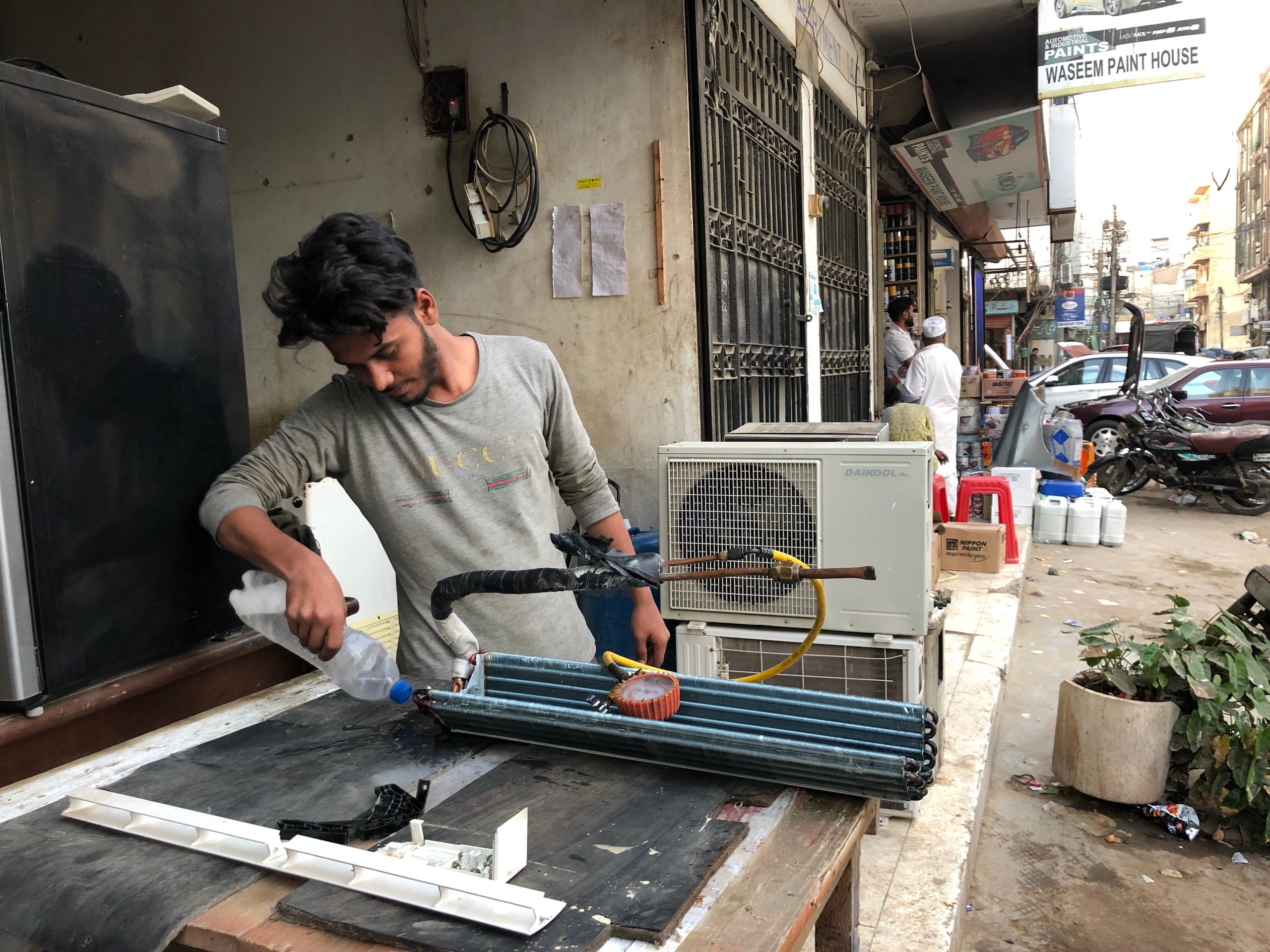 Unlike their problematic predecessors chlorofluorocarbons, HFCs do not deplete the Earth’s protective ozone layer. But they are powerful greenhouse gases that warm the Earth between 140 and 11,700 times more than carbon dioxide. Refrigeration and air conditioning account for around 10% of greenhouse gas emissions – three times more than aviation and shipping combined.

In response, developed countries have pledged to begin phasing out HFCs in 2019. Developing countries will follow suit between 2024 and 2028. Recently, Pakistan revealed it is taking the first step towards this. In October 2021, in its updated Nationally Determined Contribution, it announced it will adopt a Pakistan Cooling Action Plan (PCAP) by 2026. This will “identify the key cooling needs and prioritize actions for addressing current and future cooling demands with the minimum possible impact on the environment”.

In 1987, the Montreal Protocol on Substances that Deplete the Ozone Layer (the Montreal Protocol) treaty was signed. Considered one of the world’s biggest environmental success stories, it brought together governments and industry to phase out the use of chemicals that deplete the ozone layer.

In 2016, the Kigali Amendment was adopted. The new treaty came into force in January 2019, with the aim of fighting climate change by getting rid of HFCs (19 gases used extensively in the air-conditioning and refrigerant industry), considered thousands of times more potent than carbon dioxide. By 2050 this will eliminate the equivalent of 90 billion tonnes of carbon dioxide and avoid up to 0.5C of global temperature rise.

There is scant official information on the plan. But the news comes at a crucial moment in Pakistan’s climate policy. Extreme heat is becoming more frequent and more deadly. In June last year, a heatwave and increased demand for electricity for cooling coincided with supply interruptions.

As the country develops and its population grows, cooling will become more critical. In addition to being important for human health and well-being, cooling technologies are important for economic development, with refrigeration necessary for industrial production and the preservation of food and medicine.

“The more the world warms, the more we use air conditioning to keep ourselves cooler,” said Amna Shahab project manager on the cooling plan at the Collaborative Labeling and Appliance Standards Program (CLASP). CLASP is an international NGO focused on climate change mitigation, and one of the organisations helping draft Pakistan’s cooling action plan. Shahab added most people do not realise “the greenhouse gases emitted by these cooling appliances are warming our world”.

One of Pakistan’s problems is old technology. Before 2010, a refrigerant called R22, or R22 Freon, was used in cooling technologies worldwide, but was found to be highly damaging to the ozone layer. In response, countries like the United States launched plans to replace it.

As a result, “China used Pakistan as its dumping ground by selling us soon-to-be discarded and obsolete ACs at dirt-cheap rates. Many amongst us, who would otherwise not have afforded them, were able to buy them,” said Khurram Malik, former president of the Pakistan HVACR Society, which promotes heating, ventilation, AC and refrigeration (HVACR) engineering sciences and technologies.

Pakistan has a very weak regulatory mechanism for managing old technology, he added. “Now the country is stuck with these contraptions.”

PCAP is the first step in that direction and will be ready by 2023. Zia ul Islam, the national programme manager of Pakistan’s climate change ministry’s National Ozone Unit, told The Third Pole that, among others, the “electrical appliances used in future will have to adhere to Minimum Energy Performance Standards (MEPs) and there will be focus on insulation of buildings”. He added that cold chains (which maintain the freshness of perishable foods while in transit) and temperature-controlled facilities (for cold storage and refrigerated transportation) will be part of the plan.

Although the Pakistan Cooling Action Plan will not be a binding document, it is in Pakistan’s own interest to have a cooling plan, Islam said. He added that PCAP will be introduced as policy strategy. The binding parts will be the rules drafted afterward, following consultations. This would lead to, for example, compliance issues being incorporated into import policies through the Ministry of Commerce.

What refrigerants will be used instead?

But, Malik said, since this is a phase-out, “Pakistan can continue using HCFCs till 2040”.

Since most cooling equipment has a maximum lifespan of about 15 years, by then most of the country’s old appliances will have been replaced. “But those that continue to work can be retrofitted to be able to use the new gases,” Malik said.

The timing of the plan is also important. China’s own cooling plan comes into force this year. With Pakistan the largest buyer of Chinese refrigeration and air conditioners, it makes “perfect sense to develop our cooling plan too”, said Islam.

This year’s Beijing Winter Olympics avoided 26 million kilogrammes of greenhouse gas emissions, just by changing the chemicals used to keep its ice rinks frozen. The skaters, hockey players and curlers glided on ice made from natural carbon dioxide (R-744), rather than synthetic chemicals (HFCs). The use of natural refrigerants reportedly saved the equivalent amount of CO2 as that absorbed by planting over 1,200,000 trees.

There are other international factors. The strengthening of the regulatory framework is a key part of Pakistan’s ambition to reduce 50% of its GHG emissions by 2030 in its updated Nationally Determined Contribution. It is also in keeping with the Kigali Amendment to the Montreal Protocol to phase down HFCs by 80% by 2047, which Pakistan will soon be ratifying, said Islam.

For now, a baseline for GHGs is being developed for emissions caused by existing cooling appliances, said Amna Shahab of CLASP.

In South Asia, India launched its cooling action plan in 2019, while Bangladesh and Sri Lanka are in the process of developing theirs. So far, there is little indication in India’s plan and Pakistan’s proposal of any preparations for the vast sections of these countries’ populations who currently cannot afford to access these technologies.

The future of cooling in Pakistan

Currently, Pakistan imports all the refrigerants it uses. Because of economies of scale, it is unviable to produce them domestically, said Islam. In any case, “there are just a handful of companies [Chemours, Zhonghou 3F, Honeywell, Navin Fluorine] in the world that are producing them.”

The switch to new refrigerants, Malik said, offers, “a window of opportunity to explore the possibility to produce these gases domestically”. He hoped the PCAP would include a strong research and development element, to encourage the domestic science and technology sector, and policies that encourage builders and developers to use locally manufacturing.

“Even the private sector may find this a lucrative business possibility,” Islam said, since there is a “potential for both domestic consumption as well as for export”.

But in all this, the government would do well to keep the huge brigade of mechanics like Saquib Ali apprised of the future direction the country is headed.

“It will need to arm us all with newer skills to repair the new appliances,” said Mohammad Waqar, owner of the repair shop next to Ali’s.

Ahmar Islam, who works with Atee & Co, a company that imports refrigerants, said: “Our biggest challenge when getting new gases will be that these young boys are not aware of the dangers they are putting themselves and others in while handling them.” The gases are highly flammable, he said, and “not easy to handle”, adding that mechanics need to be educated about them.

More people will die of extreme heat than of infectious diseases

A portrait of a Karachi slum during a heatwave