At the beginning of the monsoon season this year, floods caused havoc in Nepal and India along the Mahakali and Koshi rivers. In the western catchment of the Koshi basin, northeast of Kathmandu, intense rainfall and related hazards triggered unprecedented damage in the Melamchi-Indrawati watershed.

The Hindu Kush Himalayan region is prone to numerous types of disasters because of its steep terrain, fragile geology, and intense and variable precipitation. Floods and landslides are common during the monsoon season. Every year, hundreds of people are killed and widespread damage is caused to critical infrastructure, settlements and farmlands. Now, it seems that we are seeing more ‘cascading disasters’ – where one disaster sets off another – that need to be planned for urgently.

From 13 to 15 June, the Melamchi-Indrawati watershed area experienced incessant rain. Even though the rainfall was not extreme, locals and experts were surprised by the nature of the flood and the extensive damage it caused in the riparian areas. 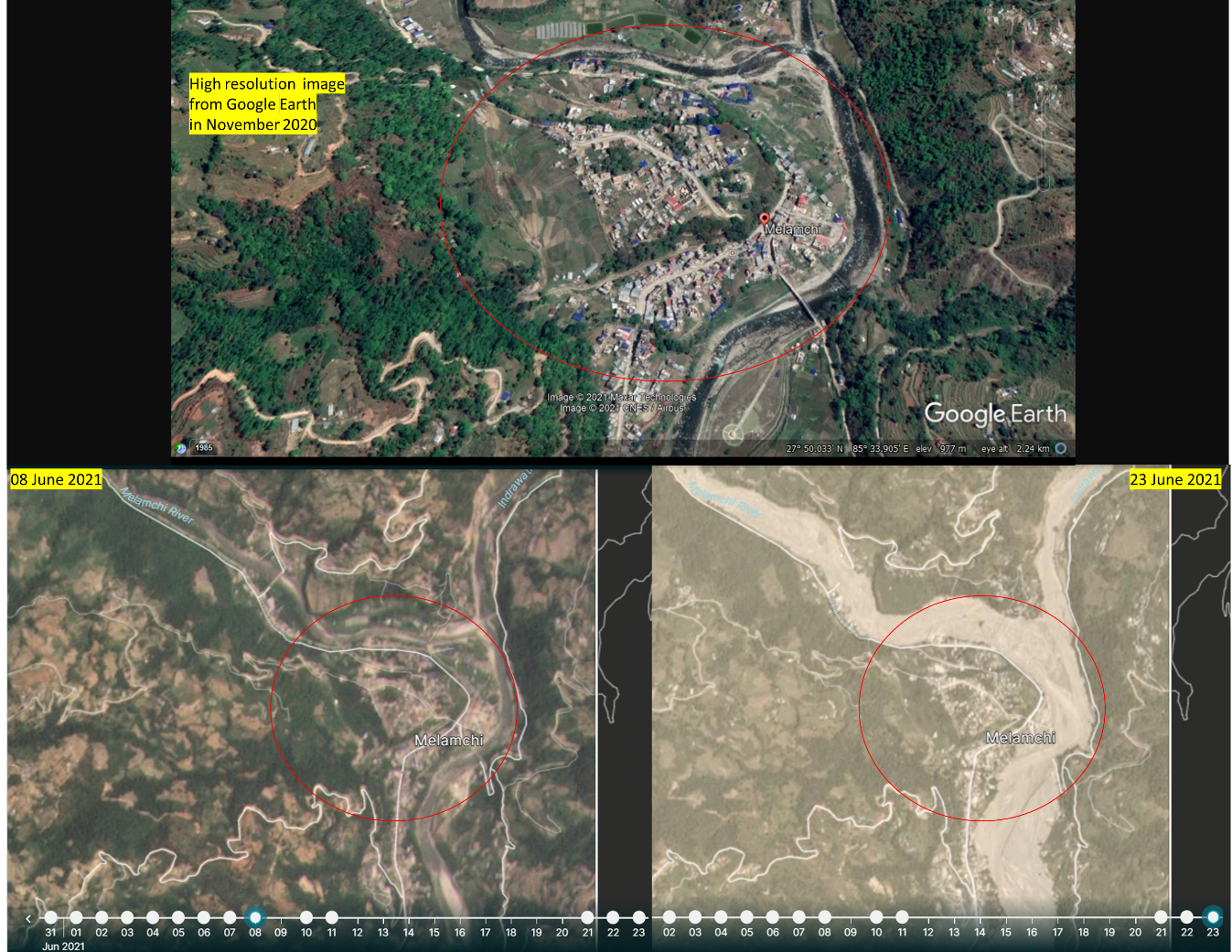 The Melamchi area, before and after the 15 June 2021 flood (Image: Google Earth and Planet)

Among other destruction, the flood damaged the headworks of the Melamchi Water Supply Project. This inter-basin water transfer project, described by officials as a “project of national pride”, aims to provide regular drinking water to the residents of Kathmandu. The flood also destroyed 176 households and 178 hectares of rice paddies downstream in Melamchi Bazaar.

In between, over a stretch of about 30 km, the flood destroyed 13 suspension bridges, seven motorable bridges, and stretches of road, disconnecting many villages. The massive deposition of sediment and debris can be seen up to 70 km downstream from the Helambu area, where the disaster began.

Preliminary investigations indicate that the floods – including mudflow that inundated parts of Melamchi Bazaar – were caused not only by rain in upstream areas, but also by temporary dams created by landslides in the upper stretches of the river. Terrestrial and satellite images show large landslides in two locations, Ghyang and Bremthang. According to the Department of Hydrology and Meteorology’s records, a landslide blocked the Melamchi River for about 45 minutes. A sudden increase in water level was observed at around 7pm on 15 June, indicating the outburst and release of the impounded water. A technical report published by ICIMOD also suggests that the Melamchi flood disaster cannot be attributed to a single cause. Rather, it was the result of multiple anthropogenic and climatic factors and processes that occurred at various locations along the river.

On 31 July, nearly one-and-a-half months after the first incident, another flood caused further infrastructure damage and debris deposition in the Melamchi watershed area. The huge area of a very old landslide, and accumulated sediment behind it, have been destabilised. Due to the continuing erosion of the landslide and sediment by the river, this area will likely remain a site of hazards for some time to come. The local municipality has appealed to those living in high-risk zones to move to safer locations.

Changes in the nature of flood disasters

Over the past decade, the nature of floods in the Hindu Kush Himalaya seems to have changed. In February 2021, falling rock and ice below Ronti peak created a massive flood surge and killed more than 200 people in the Chamoli district of Uttarakhand, India. It also caused severe damage to physical infrastructure, including hydropower plants.

The Tapovan Vishnugad Hydropower Plant site before and after the Chamoli flood of February 2021. The dam is fully covered by debris after the event. (Image: Shrestha et al. 2021)

This was similar to the 2012 floods in the Seti River in Pokhara, Nepal. The Seti flood was also caused by a massive rockfall from the southern flank of the Annapurna IV mountain, which triggered flash floods downstream. Similarly, in the Uttarakhand flood of 2013, torrential rains caused a chain of events including landslides and floods. The Chorabari Lake outburst and debris flow killed over 6,000 people and damaged roads, buildings and infrastructure.

Cascading disasters in the Himalayas

These incidents are all cascading disasters, and their incidence seems to be increasing. In such cases, one hazard can trigger others, and the cumulative impact can be much greater than that of a single hazard. These cascading disasters show that even a small hazard event that starts in the high mountains can cause damage to a large area, both upstream and downstream.

In mountainous countries like Bhutan, India, Nepal and Pakistan, the possibility of such cascading disasters occurring in a multi-hazard fashion is relatively high. Landslides, floods, glacial lake outburst floods and avalanches that occur upstream can cause damage to property and impact local lives and livelihoods much further downstream. Compared with annual floods, such disasters occur at intervals of several years, so the nature of the damage is often greater and unexpected. Likewise, infrastructure in mountainous regions is not designed for such complex challenges. 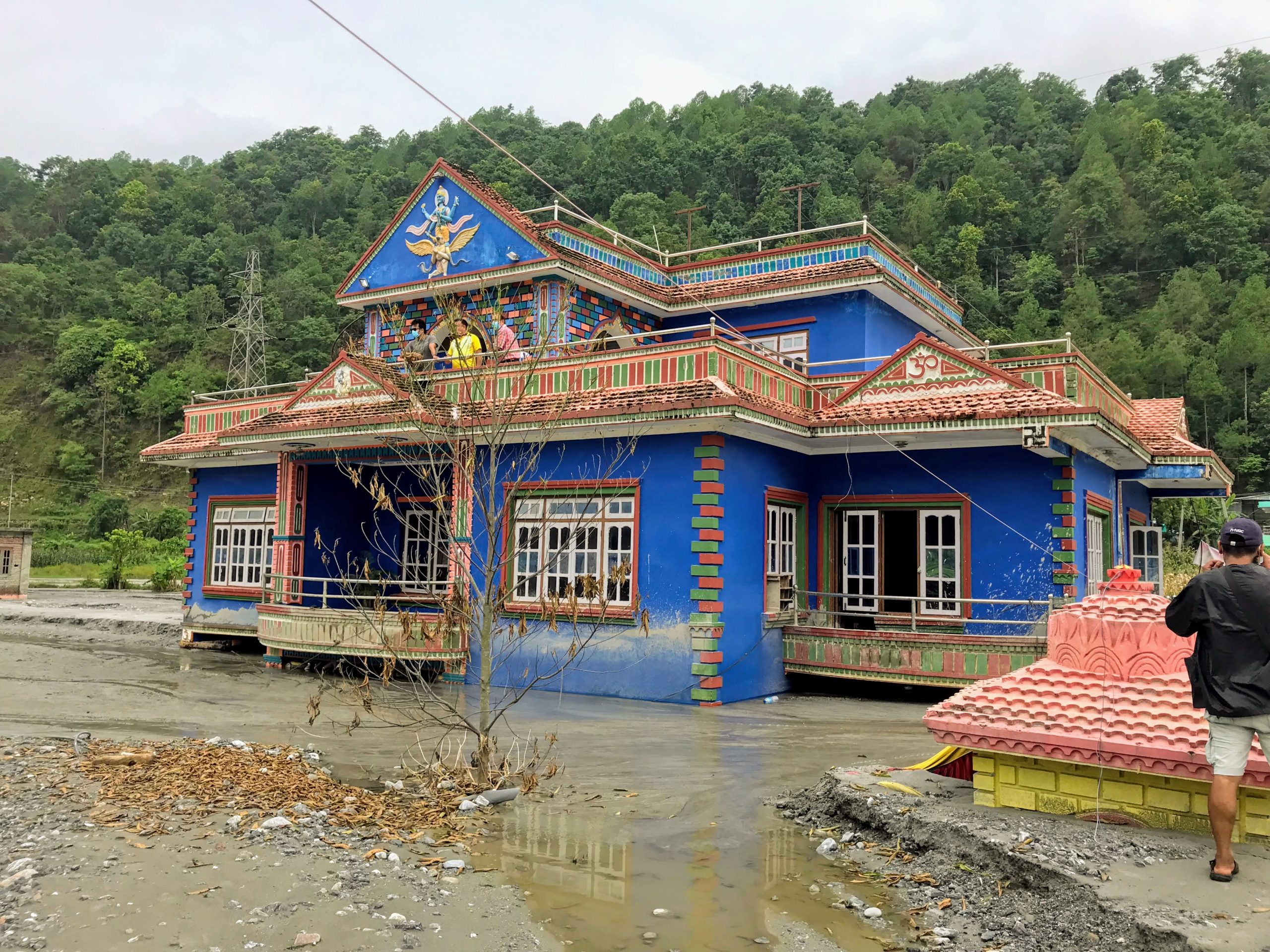 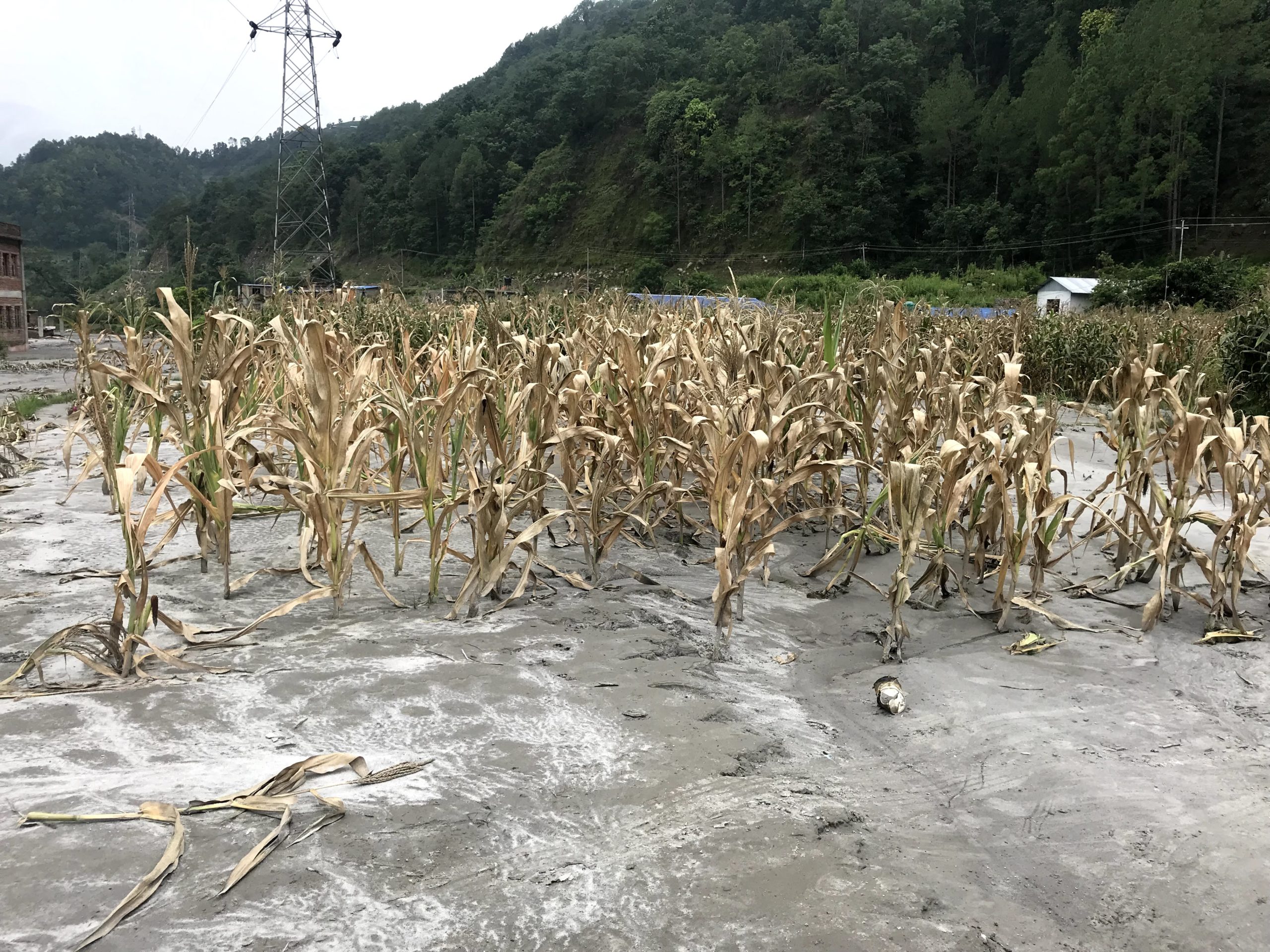 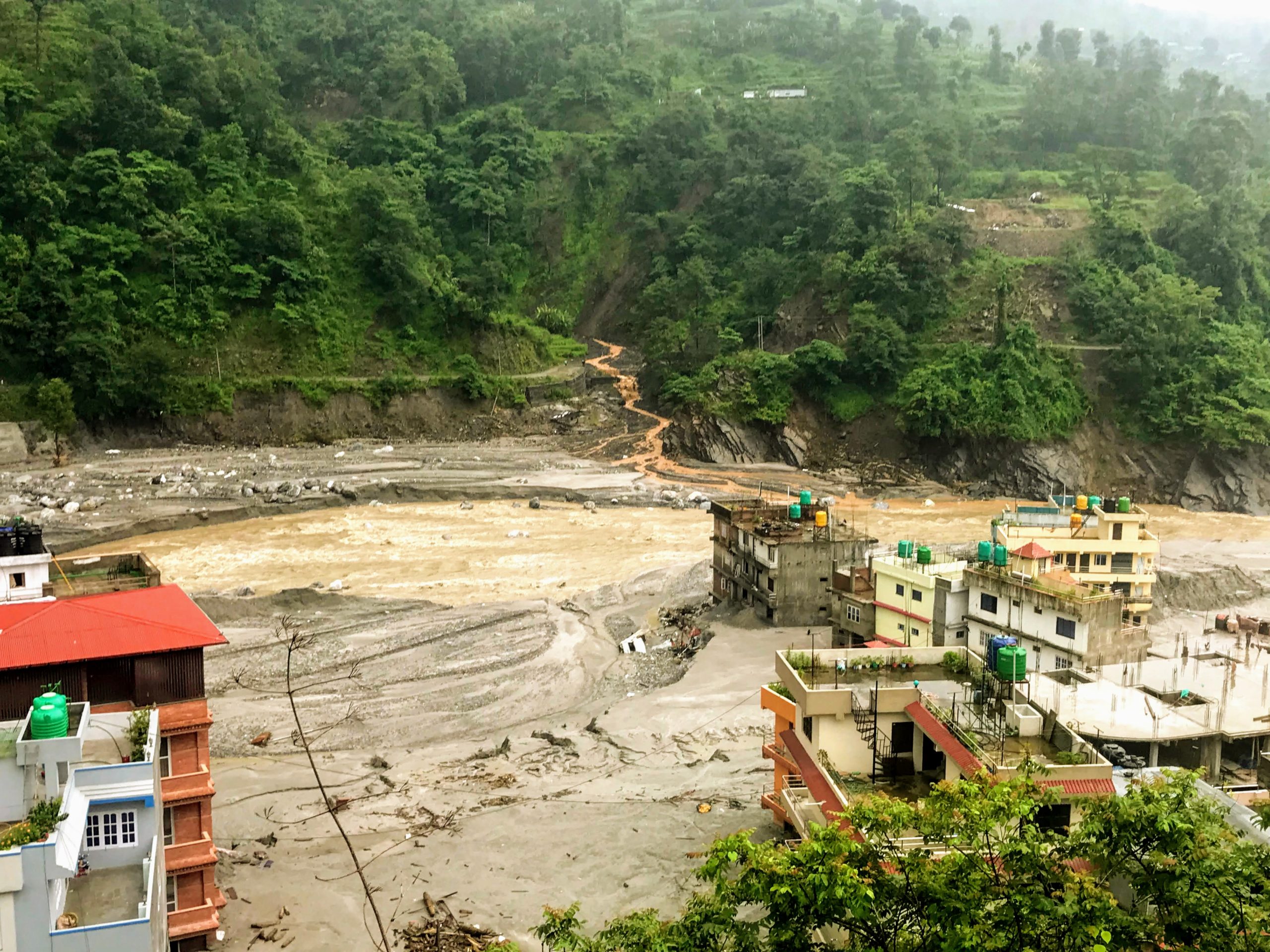 The devastation caused by the floods in the Melamchi Bazaar area (Images: Santosh Nepal / ICIMOD) 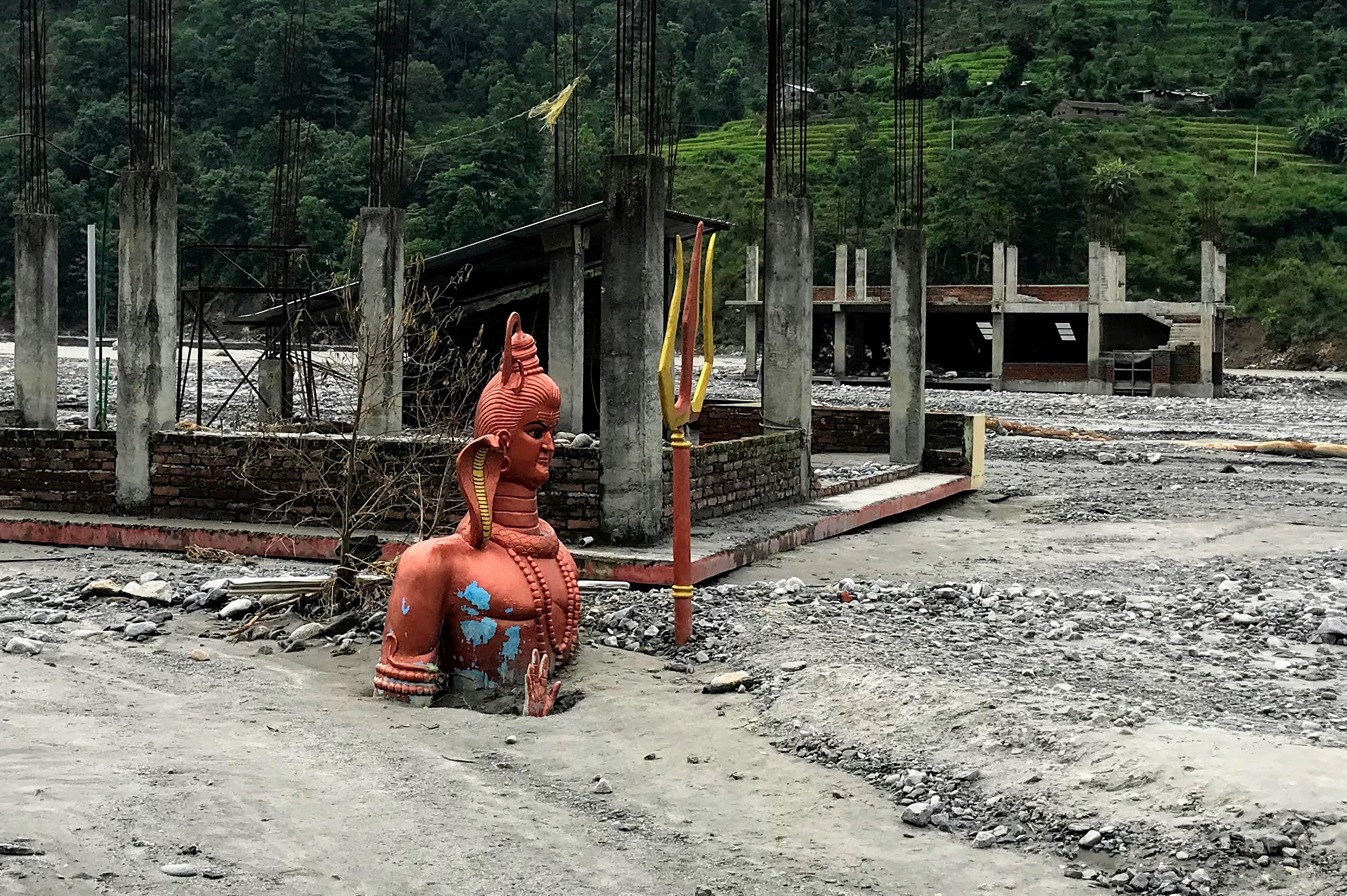 What can we do to minimise complex risk?

Although it is possible to forecast floods a few days in advance through weather forecasts and hydrodynamic modelling, there is no mechanism to predict cascading hazards in mountainous areas. Therefore, awareness and preparedness, before disasters occur, is the most practical approach to reduce risk.

People from the Melamchi area shared that, despite the massive damage to infrastructure and settlements, many lives were saved because upstream residents informed those downstream about the landslide and debris dam in the upper reaches of the Melamchi River, and warned of the potential risk of dam burst. This shows the importance of early warning, and how both formal and informal communication between upper and lower riparian communities can play an instrumental role in reducing disaster risk.

The community-based flood early warning system along the Ratu River in eastern Nepal uses an informal mechanism by which upstream communities in Nepal relay information on rising water levels to downstream communities in Bihar, India. It is necessary to further develop early warning systems that can indicate the risk of cascading hazards and potential impacts. These systems can be developed with local communities in mind so that their capacity can be built for risk assessment and response, including for transboundary rivers.

Recent cascading disasters also highlight the importance and urgency of climate-resilient development planning. The risk of disasters in the mountains increases when land-use guidelines are ignored or flouted during the development of mountain infrastructure. Utmost care should be taken to ensure climate resilience when planning physical structures in flood-prone areas with potential risks.

In the case of Melamchi, we can see that the damaged structures were close to flood-prone areas around Melamchi Bazaar, and that many buildings had been constructed on the floodplain. Similarly, the construction of rural roads has increased the risk of landslides and sedimentation. At the community level, insurance and diversified livelihood options are other approaches to minimise and spread the risk. Overall, we need integrated and thorough risk assessment while planning any development in the hills and mountains.

Studies have shown that the frequency of cascading disasters in the Hindu Kush Himalayas is likely to increase in the future due to climate change. Changes in precipitation patterns (such as extreme rainfall) seem to exacerbate cascading hazards. As the cascading nature of disasters is relatively new but being observed regionwide, and given their potential for large-scale damage across borders, there is also a need for regional cooperation to better understand this phenomenon and prepare accordingly.

Cooperate on cascading disasters across borders

On 18 June 2021, the Tama Koshi River (a catchment east of the Indrawati) on the Tibetan side was blocked by a landslide, creating potential flood risk for downstream areas in Nepal. However, the Chinese authorities notified their Nepali counterparts about the blockage and the local authority relayed this information to communities downstream. At the same time, the water level of the Upper Tamakoshi Hydropower Project reservoir was lowered by a few metres to reduce possible damage. The Chinese authorities later cleared the landslide, allowing the river to resume its course and averting a major incident.

In contrast, a small glacial lake outburst flood in Tibet in 2016 created major damage in the Nepalese section of the watershed, including to the Upper Bhote Koshi Hydroelectric Project. The successful risk mitigation on the Tama Koshi and the communication between agencies in China and Nepal clearly shows the need for and importance of transboundary collaboration and cooperation in disaster risk reduction, including for cascading hazards.

Finally, every monsoon teaches us lessons in disaster management, but we do not apply those lessons when the monsoon rains stop after a few months. As a result, we experience similar disasters in the next monsoon. It is high time that we learn from these experiences, build up the resilience of communities, and prioritise disaster risk reduction as an integral part of our development planning.

Another tragedy raises ire at hydro projects in Himachal Pradesh