Mohan Negi is worried that respiratory conditions are becoming more common across Chamoli district in Uttarakhand, north India. “At least 50% of the elderly population suffers from respiratory issues in our village of Irani,” says the president of Irani’s district village committee. “There are now even cases of asthma in young children.”

He adds that this has worsened in the past two years, with the occurrence of winter forest fires “for the first time in history”.

In just four years, the damage done by wildfires in Uttarakhand more than tripled. In 2017, 1,244 hectares of forest were burnt in the north Indian state. Last year this reached 3,927 hectares; this year 3,152 hectares have already been gutted. As of 18 May, 6,153 trees have been lost, six people injured and one person has died. Even if the monsoon arrives early this year, the devastation is likely to be worse than any of the previous years.

Data on the health impact caused by forest fires in Uttarakhand is unavailable, as the state department does not classify the information separately. But health experts in the region say there has been a multifold increase in respiratory conditions.

Anurag Aggarwal, professor and head of the Department of Respiratory Medicine at the Government Doon Medical College in state capital Dehradun, confirms to The Third Pole that the number of patients is increasing.

“There has been a sharp rise in chest pain, dry cough and even tuberculosis. Earlier we received more patients in winters, but in the last few years, it is the same all year round. The increased pollution in the state caused by both fires and industrialisation is a big factor I believe,” he says.

Uttarakhand has become a tinderbox

From late March in the Himalayas, there is a 12-week dry period, also known as pre-monsoon summer. During this period, soaring temperatures dry out leaves and wood, turning forests into tinderboxes that only need a tiny spark to become a blaze.

This year, a severe and prolonged heatwave hit India and Pakistan earlier than usual. This means forests have had longer to become drier, increasing the risk of wildfire.

The frequency and severity of forest fires in Himalayan states has reached record highs in recent years.

Uttarakhand is particularly vulnerable to the problem. Around 45% of the state is forested and it is located on the southern slope of the Himalayas, where it receives a large amount of sunlight, leading to more heating. But it has also suffered from overexploitation of its natural resources, tourism and changes in the make-up of its forests.

Negi, the president of Irani village, is concerned about the sharp increase in a short period of time. “People cannot go to their fields or take animals for grazing for fear of injury or death,” he says.

The economic losses to the villagers are immense, Negi adds. Many have had to abandon their wheat fields, the main harvest in April. Households only own enough land to feed themselves – between one and three nali (one nali is about 200 square metres). If the harvest is lost to fire, compensation from the government amounts to less than a dollar per nali, which is woefully inadequate to buy food in replacement.

“We have written numerous letters to the district administration but they only take action once something happens,” Negi says.

How have forest fires changed in Uttarakhand in the last two decades?

STS Lepcha, former senior forest officer for Uttarakhand, says that degradation of the state’s forests has increased wildfires. “Degraded or abandoned land is invaded by pine trees, a species highly tolerant to fire and drought,” explains Lepcha. “The trunk of the tree can withstand fire and the pines, which contain resin, burn like diesel as soon as it comes in contact with ignition. Thus, a little spark can lead to the burning of the entire forest”.

He adds that there is a social dimension, as the increase in uninhabited villages means fires are not being reported early on.

Nishant Verma, chief conservator of forests and disaster management for Uttarakhand, tells The Third Pole that every possible step is taken to keep the fires under control. He says that before the start of the fire season his department carried out controlled burning, as well as training. This, he says, led to cooperation with villagers and quick response times.

“We have social media groups, crew stations and villagers deployed as bywatchers for these three to four months all leading to sharing real-time information… As soon as we hear of an incident, the team does all it can to douse it,” he says.

In a climate-challenged world and an ecologically fragile state like Uttarakhand, the only silver lining is that nothing is unexpected

However, experts told The Third Pole that the increase in fire incidents is not just a climate change issue, but a management issue.

“There is no point in spending time trying to douse the fire in mature pine forests. Instead, all the focus should be concentrated on saving the regenerative areas,” Lepcha stresses.

“In a climate-challenged world and an ecologically fragile state like Uttarakhand, the only silver lining is that nothing is unexpected. We have a lot of history when it comes to forest fires and other natural disasters, and these should be used to our advantage to mitigate the impact,” says Anoop Nautiyal, a social activist and environmentalist based in Dehradun.

Another factor is the year-round movement of people in remote areas, says SP Sati, a geologist and environmental scientist in the Garhwal region of Uttarakhand. In 2000, when the state was formed, it only had 8,000 kilometres of road, but in the last 21 years, it has increased to more than 45,000 km. As more people are able to reach remote areas, Sati says the likelihood of human-started fires rises. 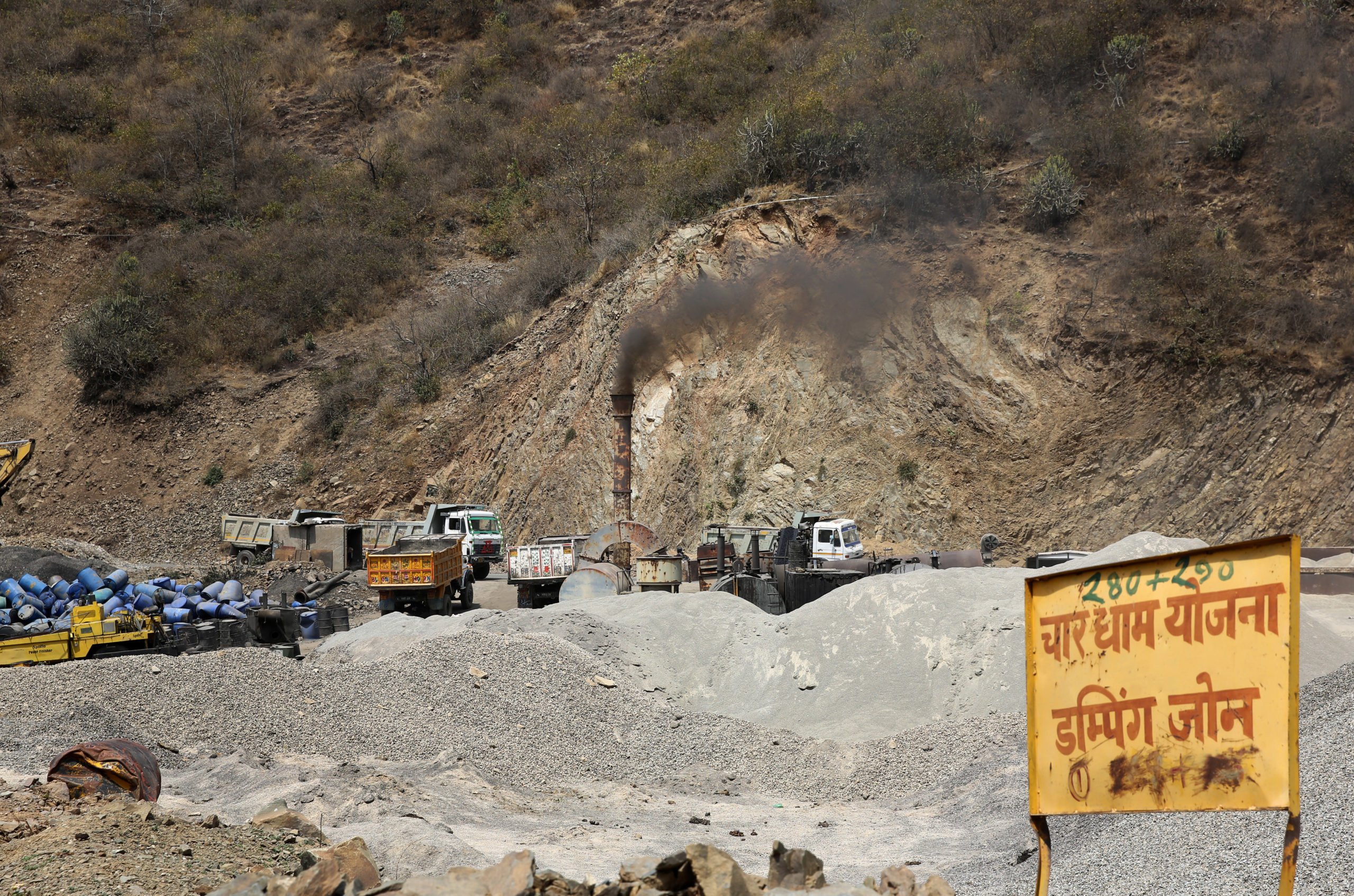 Road building on the way to Devprayag in Uttarakhand in April 2021 (Image: Cheena Kapoor)

Sati says that the state forest department should focus more on implementing a plan to minimise the annual forest fires. Dealing with the issue requires manpower, resources and citizen engagement, since many places in the Himalayas are inaccessible by fire engines.

He gives the example of two villages, Sitlakhet and Syahi Devi, where local people have acted to stop fires being started in the forest.

The environmental impact of forest fires extends beyond their contribution to global heating. When forests burn, they release particulate matter.

SP Sati, the geologist and environment scientist, explains that the increase in particulate matter or aerosols in the air causes an increase in the size of raindrops – which leads to cloudbursts. “The more the particulate matter, the higher chances of rainfall disturbances which lead to cloudbursts, thus making the state even more vulnerable to natural disasters,” he adds. The presence of the particles in clouds also prolongs dry spells – thus creating a vicious cycle of heatwaves and forest fires.

Particulate matter is one of the key reasons for glacier melting, studies have confirmed. “The unburnt carbon fragments from the fires, also called black carbon, blows towards the glaciers, causing a black cover. As we know that black absorbs more heat, this is one of the reasons that the glaciers are melting at a higher rate,” Sati points out.

Winter fires pose a particular challenge. Uttarakhand’s hilly terrain makes it difficult to control the fires during the summer but during winters the fires become inaccessible due to snow and sub-zero temperatures.

As forest fires become a year-round phenomenon, the state has its task cut out, both in terms of prevention and mitigation.

Why India’s heatwave has turned out the lights