On 29 August 2022, the Government of Nepal signed a USD 100 million “concessional financing agreement” with the World Bank to support “green, resilient, and inclusive development (GRID)”. The accompanying press release on the agreement, equivalent to around NPR 13 billion, stated that it would be the first of three such concessional loans to Nepal.

But activists in Kathmandu have perceived this as a ‘climate loan’, and have launched a series of protests against it, arguing that Nepal should receive climate finance in the form of grants, not loans, given its minimal contribution to global climate change.

As the climate summit COP27 gets underway in Sharm El-Sheikh, Egypt, stakeholders in Nepal are divided over the issue. With more such agreements expected in coming years, the funding meant to address the problems caused by climate change risks becoming a problem itself if these concerns are not resolved.

The huge costs of adapting to climate change

Nepal’s National Adaptation Plan estimates the costs of adapting to the impacts of climate change will total USD 21 billion up to 2030, rising to USD 46.4 billion by 2050. The plan says that Nepal itself will cover USD 1.5 billion of these costs, meaning that USD 45.9 billion of financing from external sources will be needed for climate adaptation up to 2050.

Meanwhile, the country’s Nationally Determined Contribution ­submitted to the UN Framework Convention on Climate Change (UNFCCC) says that achieving Nepal’s climate mitigation targets will cost the country USD 25 billion to 2030. How much of this can be covered by Nepal itself is not yet clear, according to Buddhi Sagar Poudel, chief of the Climate Change Management Division at Nepal’s Ministry of Forests and Environment. But Raju Pandit Chhetri, executive director of the Prakriti Resources Centre, a Nepali environmental justice NGO, thinks the proportion will be as small as Nepal’s estimated domestic share of the adaptation costs.

Back in 2009, developed countries pledged to deliver USD 100 billion per year by 2020 to help poorer countries deal with the impacts of climate change. This target has not been met.

The concerned government agencies in Nepal do not have an integrated dataset to inform citizens how much money Nepal has received in climate finance so far, let alone a breakdown into grants and loans, concedes Poudel, adding that his division has just begun organising such data.

Poudel at the Ministry of Forests and Environment says that in the past two years alone, Nepal government received at least USD 328.81 million for projects and programmes that have direct climate benefits or co-benefits, from sources including the World Bank, Green Climate Fund, World Wildlife Fund and Global Environmental Facility. Of this, around 35% (USD 117.9 million) was received as loans, and the rest as grants, says Poudel.

Pushback on loans for climate adaptation

Many climate activists in Nepal are opposed to any loans associated with climate change mitigation and adaptation.

“Nepal is one of the least developed countries with negligible carbon emissions,” says Shreya K.C., a young activist and youth climate champion for UNICEF South Asia. “But we lie at the forefront of facing the horrendous impacts of the climate crisis which we are not primarily responsible for. Hence, we need to take a strong stand that we don’t need climate loans to solve the problems we didn’t cause.”

“Instead, those polluting countries whose reckless emissions have caused us to suffer should provide us reparations to cope with climate change,” she says.

Pandit Chhetri argues that loans for climate adaptation are unacceptable because adaptation activities do not generate a return on investment. “It’s a basic financial rule that you take loans to gain profits so that you can pay them back,” he says. “But, if you aren’t earning anything, if it means saving people from the climate crisis, how can you serve the loans?”

Nepal government also agrees in principle that the country should only accept grants for climate programmes, says Poudel. “But apparently, we have failed to implement this strongly. We need to improve our negotiation capacity now.”

Debate over definition and double-counting

There is some confusion as to whether the recent loan agreement with the World Bank falls under the definition of climate finance.

Abhishek Shrestha, an activist who led protests against the agreement, notes that the title of the agreement refers to green, resilient and inclusive development, with no specific mention of climate. But, in the accompanying press release, ‘resilient’ is replaced by ‘climate-resilient’. “It means it will be counted as a climate loan,” says Shrestha, who is a co-founder of the Digo Bikas Institute, a climate change research organisation. 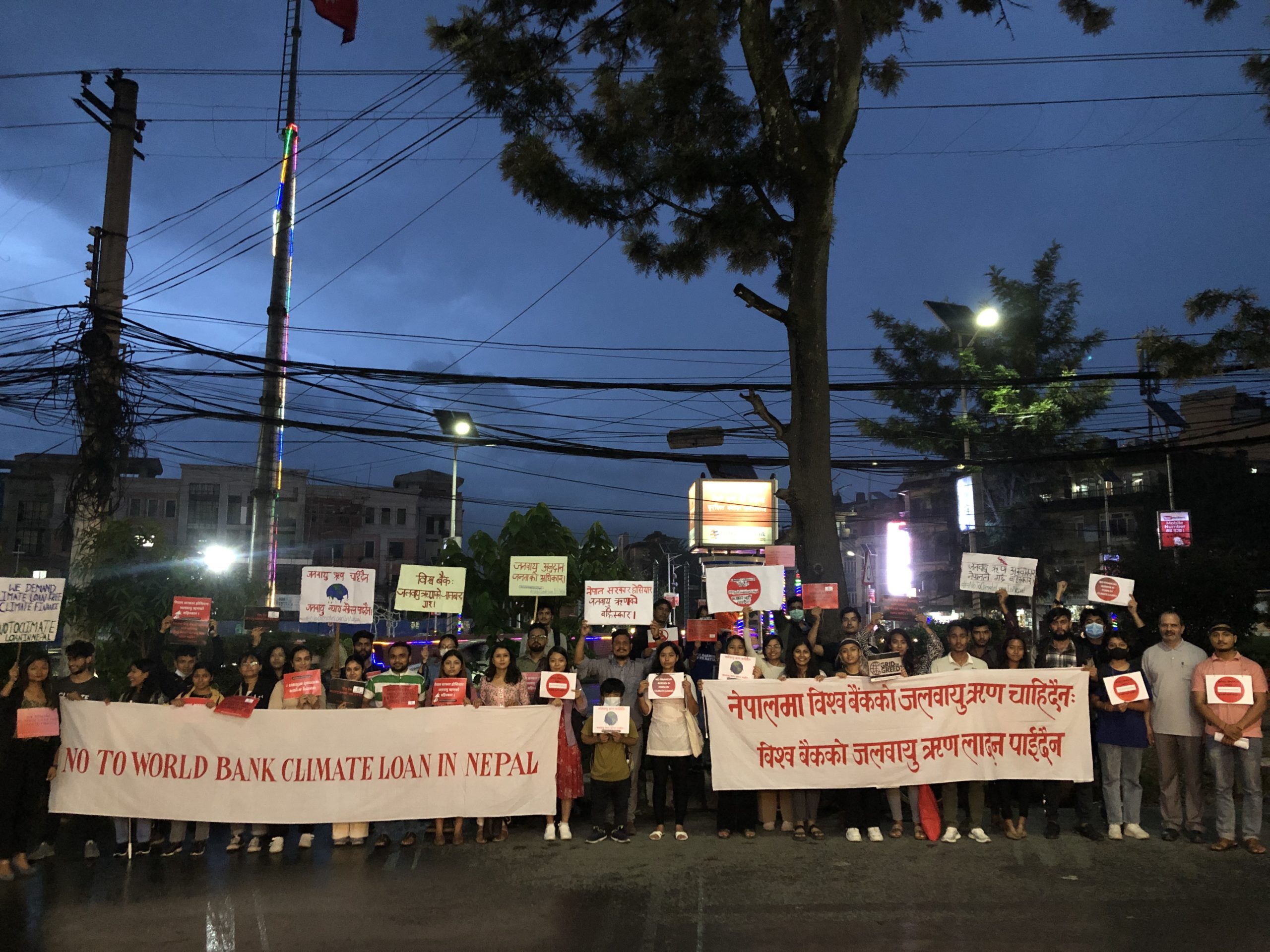 Activists protest against a ‘climate loan’ from the World Bank in Kathmandu, Nepal, in September 2022 (Image: Abhishek Shrestha)

Activists are worried that the World Bank could count this aid twice, as both general development aid and climate assistance, in its internal reports and in reports presented to international forums including those related to the UNFCCC.

In an email interview with The Third Pole, Faris Hadad-Zervos, the World Bank’s country director for Nepal, says that a part of the loan will be counted as climate finance. “The GRID [financing agreement] is essentially development financing with climate co-benefits; it supports the government’s policy actions in areas such as addressing air pollution and drinking water quality… The climate co-benefit of the project is what we report as our climate finance.”

However, Yug Raj Pandey, an undersecretary at the Nepal Ministry of Finance’s International Economic Cooperation Coordination Division, has a different interpretation. “No way will it be counted as climate finance,” he says. “They [the World Bank] have mentioned climate just because it’s their global focus, but this loan is not meant for climate programmes.”

Pandey further claims the government can decide what the money will be spent on. “We will spend it on development projects such as roads, but making sure that everything is climate-resilient as demanded by them.”

Shrestha describes giving loans to a poor country in the name of climate finance as “an injustice”. “The World Bank will count this as a climate loan internationally, which does not go with the idea of climate justice as established in the Paris Agreement,” he says.

Poudel thinks the World Bank “played a trick” on Nepal, suggesting the multilateral agency inserted the word ‘climate’ into the loan agreement with an intention to count a part of it as climate finance.

But Hadad-Zervos from the World Bank sees the loan as an opportunity to unlock more financing for Nepal. “Concessional financing is an important part of a comprehensive toolbox of public sector development financing that Nepal can access,” he says. “Such financing can help attract grants and domestic and foreign private sector investment.”

Climate finance for Nepal at COP27

Poudel says Nepal will be prioritising climate finance at COP27 in Egypt. But many observers are not hopeful about the likely outcomes for Nepal.

“Nepal has not been able to progress on climate finance because the political leadership here does not care,” says Pandit Chhetri. “Unless the politicians own the agenda and commit to implementing it, nothing will happen.”

The political situation at home in Nepal looks set to distract from COP27. Whereas prime minister Sher Bahadur Deuba attended COP26 in Glasgow last year, he is sending Uma Regmi, Nepal’s minister for women, children and senior citizens, to participate in this year’s summit. Since Nepal is holding elections on 20 November, senior ministers will be busy soliciting votes. The prime minister fired the environment minister of the coalition government in October over disputes between their parties regarding the electoral alliance. The prime minister himself is now in charge of the environment ministry, albeit nominally.

“A minister not concerned with climate and environment attending the meeting – it will be a holiday trip for her,” says a high-level official at the Ministry of Environment, speaking on condition of anonymity.

Analysis: How decentralisation in Nepal is undermining climate action

Frustration and fury over climate finance at COP26

Opinion: Biggest US aid project in Nepal has created turmoil