The people who live on the banks of the Jinjiram, a small transboundary river that flows from Assam in India to Bangladesh, have an innovative way of taming its waters every monsoon. They anchor large bamboo fences on the banks.

Based on indigenous knowledge, this low-cost solution protects the banks from erosion. The fences reduce the speed of the monsoon water flow. Silt gathers next to them, creating a natural flood barrier and channelling the water midstream.

There are bundles of fences at vulnerable points along the banks, so the locals have developed a word for this process derived from the English word “bundle” – they call it bandalling.

Flowing almost parallel to the Brahmaputra near the left bank of the mighty river, little Jinjiram enters Bangladesh in the northern district of Kurigram. It flows another 60 kilometres before joining the Brahmaputra.

It is smaller than the other transboundary rivers that flow into the Brahmaputra in this area such as the Teesta, Dudhkumar or Dharla. But Jinjiram does have its own little tributaries – the rivers Kalo and Donni.

For eight months of the year, the Jinjiram quietly sustains the thousands of people who live near its banks. This changes during the monsoon from June to September. It swells with the rainwater that flows down the slopes of the Meghalaya plateau, devastating livelihoods such as fishing and agriculture by eroding its banks and sometimes by flooding.

In larger rivers the government builds concrete embankments. Smaller ones like Jinjiram, with a basin area of 240 square kilometres in Bangladesh, are often neglected.

So, the locals get together and do the bandalling.

Bamboos that are 25-30 feet (8-10 metres) long are lashed together and then the whole fence is anchored at least 15 feet (5 metres) deep into the riverbed. The vertical posts are supported by horizontal ones to strengthen the fence. The size of the fence depends on the water flow, its volume near that point and what needs to be protected. Some fences are set up at an angle to the bank to reduce the water speed further. 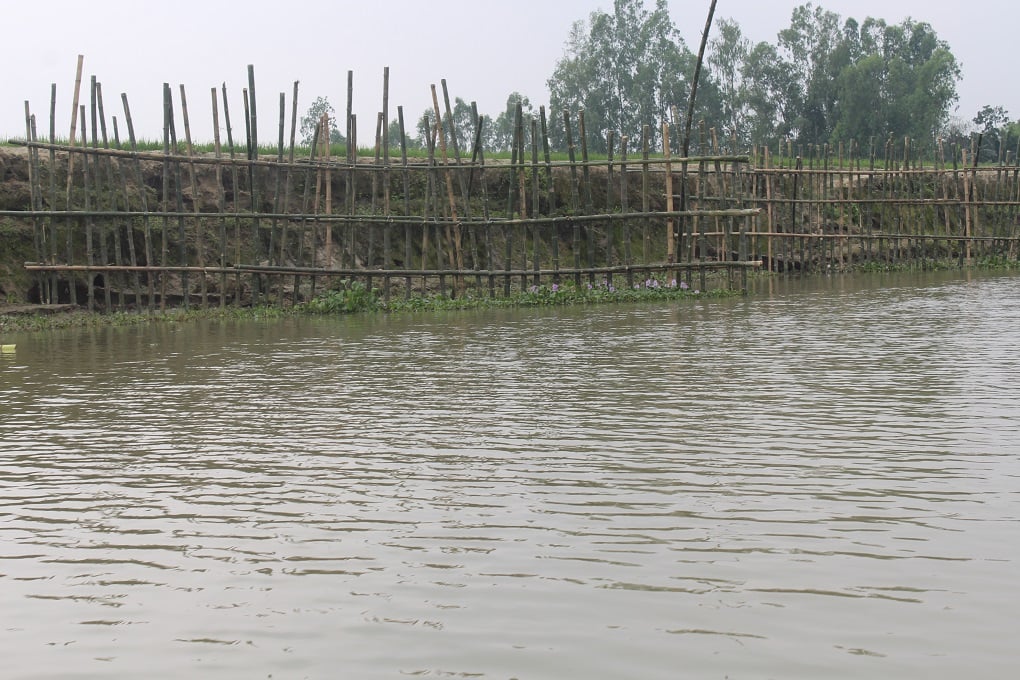 A “bandal” of bamboo keeps the locals safe from the wrath of the river [image by: Munir Hossain] 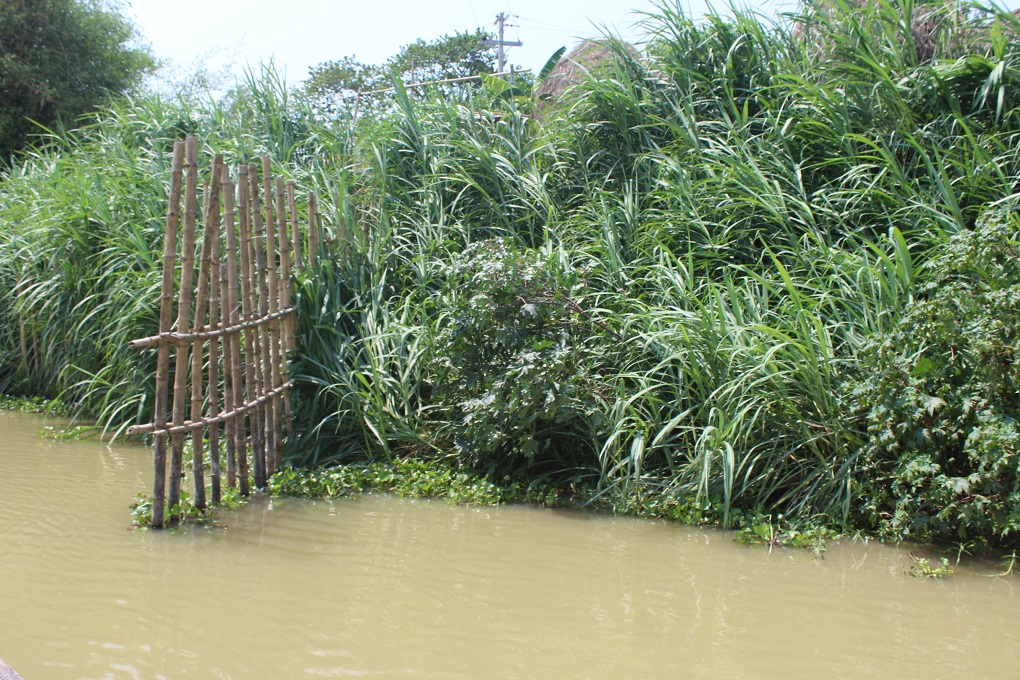 The Jinjiram is dotted with various types of bandalling [image by: Munir Hossain]

In the Jinjiram, such fences are set up every few hundred metres in the river, to progressively decelerate the water flow before a vulnerable point is reached.

The silt that builds up next to the fences channels the water midstream, a process that also scours out the riverbed and makes the Jinjiram more navigable in the dry months.

There is more bandalling in the Jinjiram now than ever before. According to local residents, there are at least 50 sections in the 60-kilometre stretch of the river in Bangladesh, where it has a maximum width of 107 metres.

Every stage of the bandalling, from planning to installation, is based on local needs and initiatives. When residents see a stretch of the bank eroding, they get together and form a committee that leads the work, such as raising funds and carrying out construction.

In 2018, residents of Namapara village put up bandalling across 22 sections of the river, each ranging in width between 10 and 30 feet. In all, they installed 400 feet  of bandalling to control the water flow during the monsoon and save their village.

It cost around BDT 300,000 (USD 3,500) and was funded entirely by the community. Those unable to contribute financially worked on the project. The same system is used when repair work is needed every few years.

Mortuza Ali, secretary of the village bandalling committee, told The Third Pole, “We were setting this up to save our land, crops, homestead, vegetation and other belongings from river erosion.”

Ali added that this type of bandalling can be found every few kilometres along the river. The fact that residents are prepared to spend money on such a project showed that the effectiveness of the technique, he stressed. 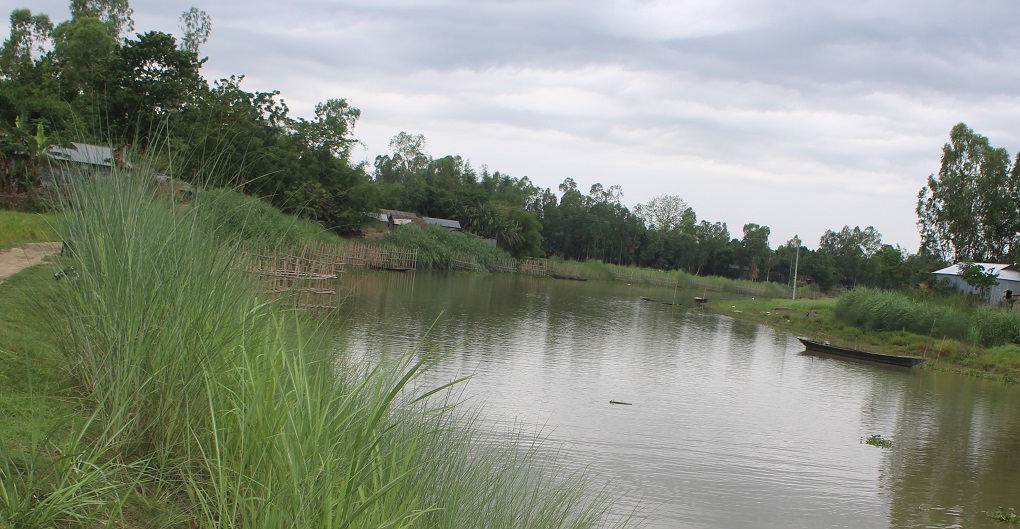 The cost and labour of the bandalling is borne by local communities [image by: Munir Hossain]

Saiful Alam, senior water resource specialist at the Institute of Water Modelling, a government think-tank, said, “Bandalling is the trusted method to protect [against] river erosion. It works very well in the small rivers. At the same time, it is a low-cost and local solution. Adding some technical inputs, the method might easily be used in large rivers.”

Alam, who earlier served as the director-general of Bangladesh’s Water Resources Planning Organisation, added that the riverbank protection authority does not seem interested in bandalling, probably because of its low cost.

The government has been constructing concrete structures called ‘hard points’ in rivers near the banks vulnerable to erosion to divert the water flow to the main part of the channel. Many concrete embankment projects all over South Asia have been plagued by delays and mired in corruption controversies.

The use of embankments in the silt-heavy rivers of South Asia has been debated since the British colonial period, but the use of embankments has continued due to public pressure as well as political and monetary interests. There is, though, now a worldwide move to consider nature-based solutions, looking to live with nature rather than control it.

See: A dammed history of the Koshi

Ataur Rahman, a water resources expert and professor at Bangladesh University of Engineering and Technology (BUET), said, “[Bandalling] was practised everywhere when there was no advanced technology and financial resources to create concrete hard points. It may not be suitable for all rivers like the Brahmaputra, where the flow in the monsoon is huge.”

However, he said, the method may be suitable as a temporary solution for small rivers.

Sheikh Rokon, secretary general of Riverine People, a Dhaka-based NGO, was brought up in this region of northern Bangladesh. He said, “Bandalling is not new in the Brahmaputra basin. It has long been practised by local people. But the current practices of establishing concrete structures have been reducing the use of bandalling. It is one of the nature-based solutions to save the river and its resources.”

Abu Siddique is a journalist based in Dhaka