The Kashmir valley suffered a devastating flood in September 2014. After an unusually high level of rainfall, the fact that buildings had been built on flood overflow channels and floodplains led to a catastrophe, resulting in more than 190 deaths in the valley and damage estimated at INR 1 trillion (USD 16 billion).

Kashmir has, historically, received low levels of rainfall during the South Asian monsoon season (typically June to September). But new research suggests this may be changing, creating the conditions for more catastrophic floods unless authorities can better plan and prepare.

The monsoon is sweeping into Kashmir

A recent research paper analysed 30 years of rainfall data across the Kashmir valley, from 1980 to 2017.

“We saw an increased activity of Indian summer monsoons,” said Mohammad Muslim, a professor at the University of Kashmir and one of the paper’s five authors. Their research found that the contribution of overall rainfall in the Kashmir valley from the summer monsoon rose by about 10% between 1980-1990 and 2010-2017.

The research suggests that the Indian summer monsoon winds, which bring rain to the Indian subcontinent but would previously stop at the southern border of the valley, are increasingly making their way inwards into the valley.

What is the urban heat island effect?

Compared with rural areas in the same climate, cities and urban areas usually contain lots of concrete and other surfaces that soak up and hold heat, and less vegetation, which provides shade and cools down the air.

The resulting higher temperatures are known as the ‘urban heat island effect’.

“Our understanding is that it is due to something within Kashmir,” said Muslim. “There has been a strong change in the land use in the Kashmir region. In Srinagar city, we used to also have agricultural and horticultural land. Now it is all gone. It is all built up and that has a strong influence by creating a heat island effect.” Higher temperatures mean low pressure develops, which attracts the Indian summer monsoon winds into the valley, Muslim explained.

Muslim, who also researches climate change adaptation, is worried about the change in rainfall patterns, because more rainfall in the summer months means additional water in the rivers in the Himalayan valley, which are already carrying large amounts of water from glacial and snow melt during that period.

“If [rainfall in summer and autumn] is too much, it will have strong consequences, in terms of flooding and destroying crops. We already have seen the consequences of rainfall in autumn, in September 2014.”

The potential impact of more monsoon rainfall could be worsened in urban areas of the valley, because the region’s natural drainage and flood buffer systems have been heavily encroached and built upon.

Sheikh Aneaus, who is currently studying for a PhD in geoinformatics at the University of Kashmir, has been tracking the health of wetlands in the valley. A research paper she co-authored found that 37% of Narkara wetland, one of the remaining urban wetlands in Srinagar, has been built over. The paper noted a 2,663% increase in the built-up area between 1965 and 2016.

Map showing the location of Srinagar in Kashmir, and its surrounding wetlands. Map by The Third Pole

The Kashmir valley’s network of wetlands can act as a natural flood-prevention system: in their natural healthy state, the wetlands can absorb some additional water, while an increase in one water body would lead to water flowing into others interconnected with it. This would help to avoid flooding.

“The reckless urbanisation in the Narkara affects the hydrological connectivity and ecology of this important semi-urban wetland which increases the vulnerability of people to flooding in the catchment of this Himalayan wetland,” said Aneaus.

Khushal Sar, another wetland in Srinagar, has been similarly affected, with much of the area now built on. “The filling of the Mar canal [which drains into Khushal Sar] and urbanisation severely impacted the wetland health by not only reducing the water-holding capacity of this wetland but also affecting the hydrological connectivity with other neighbouring water bodies,” said Aneaus.

In the September 2014 deluge, areas around the wetlands were severely inundated, she said.

“Any wetland in Kashmir, protected or not, has some encroachment, either in terms of houses coming up in the surrounding areas, or in the drainage areas.”

In Hokersar, a wetland of international importance and a crucial stop for migratory birds, a poorly planned flood channel intended to drain water away from the city in case of floods has led to the wetland being clogged. The flood channel brings silt into the area at a higher rate than can be managed by the wetland.

According to Rashid Naqash, a regional wildlife warden, “60% of the Hokersar wetland is under heavy siltation right now”. He said that the Srinagar Irrigation and Flood Control Department is trying to clear silt from the area using dredgers, adding that this was not a planned solution, but merely the management of a problem that would recur.

Lack of planning in Kashmir’s urbanisation

Ramzan Ahmed Dar, regional town planner with the Housing and Urban Development Department who has been involved in planning most of the urban areas in the region, blamed a lack of scientific data for the haphazard urbanisation that now afflicts Kashmir and its flood defences. “We are not aware about the risks involved, so we just plan like that,” he said. 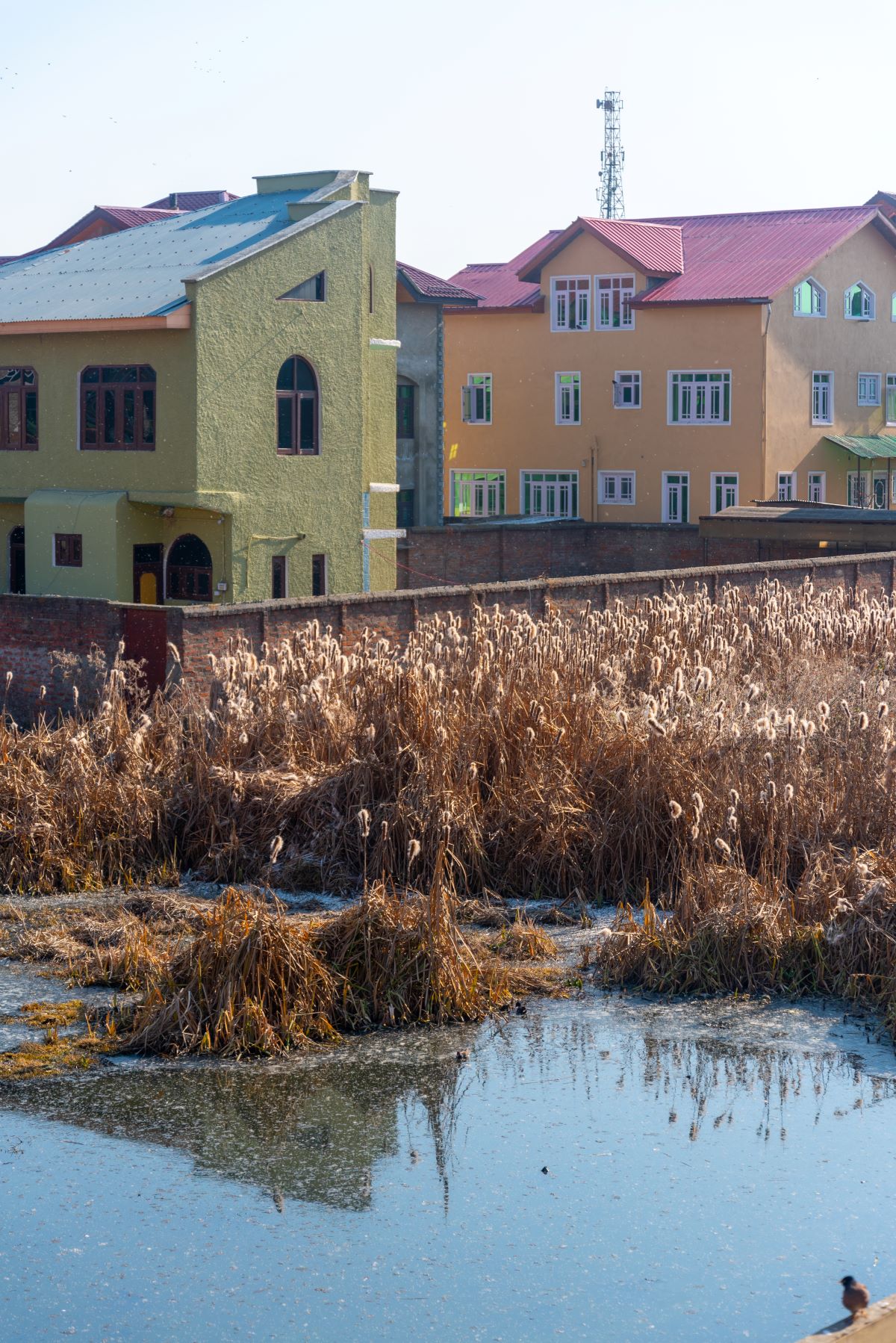 A patch of wetland left amidst a housing development in Srinagar (Image: Furkan Latif Khan)

“We need to have vulnerability and hazard maps, so that we could use those inputs in our master plans. Our land use policy should have been drafted taking into consideration risks, but that is not available with us… We hardly take into account the risk factors,” Dar told The Third Pole.

He said that urban planners face multiple challenges in Kashmir, since it is in an area of high seismic activity and prone to landslides. He described the current urban planning as “an environmental disaster in times to come”.

No coordination in urban master plans

Dar said that many departments involved in city planning show little interest in coordinated planning, leading to indiscriminate issuance of building permissions. “The [urban] master plan is a coordinated sectoral vision of the government. We try to coordinate and connect between different departments. Unfortunately, when we prepare these documents, departments do not show their interest, [and] when the document gets made, it ends up with many loopholes,” said Dar. These include inadequate data regarding how much land will be required for housing colonies, and a lack of clear demarcation of areas (such as important wetlands) that should not be built on.

This has been true for all master plans made since 1970 for Srinagar and other towns, added Dar.

Aneaus echoed the concerns about elements missing from urban plans. “The lack of Environment Impact Assessment is a discrepancy that exists in every master plan,” she said. “You can’t give endless amount of land to planners to make housing colonies. They have to abide by certain rules. But they don’t listen to scientific reason.” 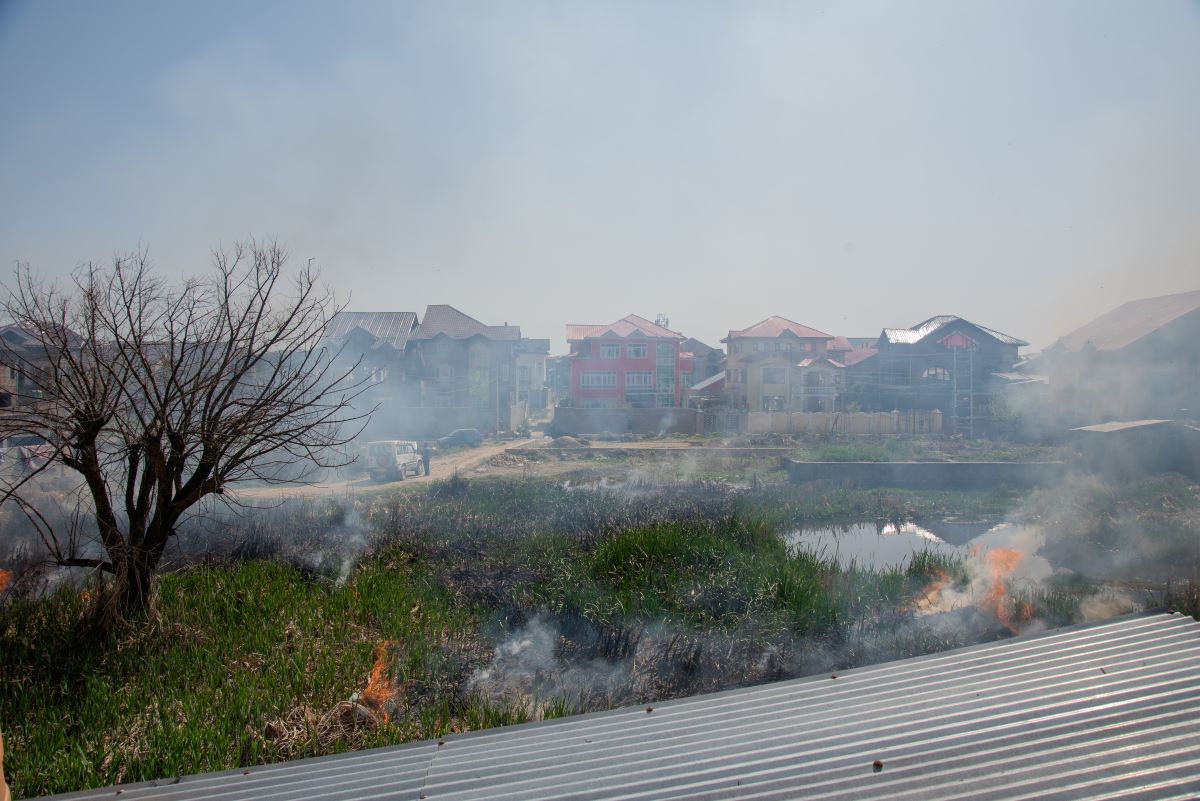 Fires lit in a patch of wetland beside a housing development in Srinagar, to get rid of waste dumped into the wetland by surrounding households (Image: Furkan Latif Khan)

Muslim’s latest research concludes by stating that changes in rainfall patterns in Kashmir could “disturb the ecological balance of the region”. But he is concerned that policymakers are not paying enough attention to these eventualities.

“We tried to bridge the gap between [our research and policy] by setting up a climate change working group. We tried to bring people [together] from academia, from bureaucracy. Unfortunately there is still a gap. It needs to be taken care of by the policymakers,” he said.

Kashmir floods may be linked to climate change

Could the Kashmir floods have been avoided?