As Nepal struggles to manage the country’s many rivers, it finds that its new federal system under the Constitution promulgated in 2015 provides more confusion than help.

Butwal, in southern Nepal, is one of the driest regions in the country. Local authorities are worried about falling water levels in the Tinau river – the town’s lifeline. As the situation worsened, the town allocated one million Nepali rupees (USD 10,000) last year for conservation upstream to increase water flow. This was meant to help maintain ecosystems upstream.  Nearby Tilottama town in Rupandehi district and Siyari rural municipality have followed suit.

Unfortunately, the provincial government has not prepared the necessary legal framework to enable local authorities to invest in conservation upstream, said Dal Bahadur Gurung, a member of Dovan Community Forest User Group. The people downstream are willing to pay, the people upstream are eager to be paid for their services, but there is no process to make it happen. 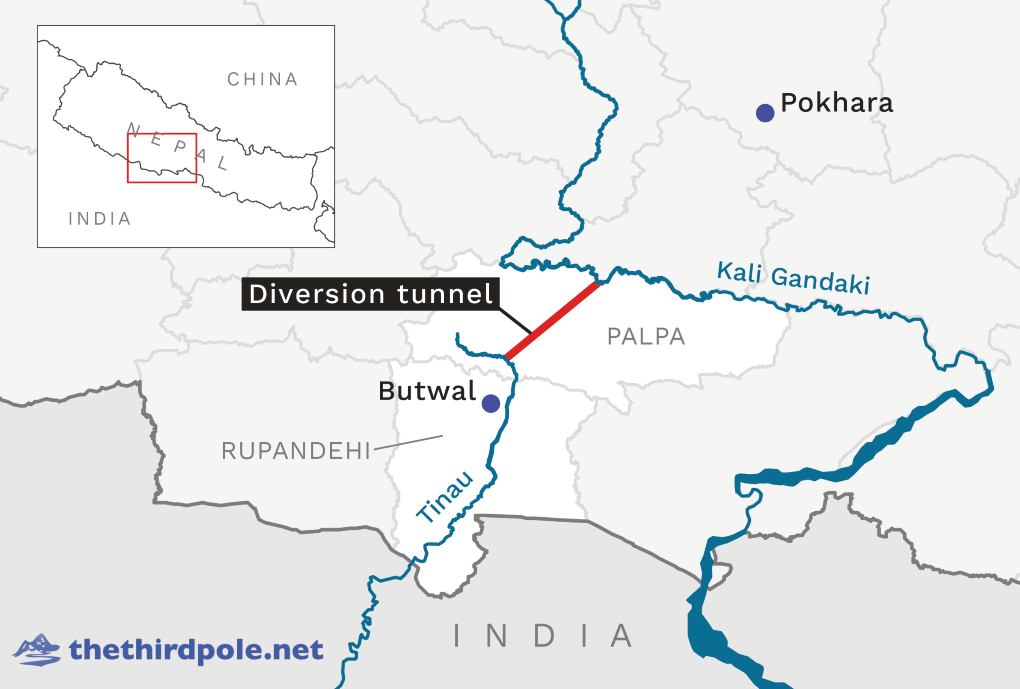 Under the new Constitution a great deal of federalism was introduced, but the details are still unclear. A few weeks ago, the Ministry of Energy, Water resources and Irrigation came up with a draft policy defining who has jurisdiction over rivers. According to the draft, the federal government has to right to make decisions on water and infrastructures over larger rivers (those that are transboundary in nature originating in the high mountains), provincial governments would have authority over medium class rivers (those originating from the Mahabharat range and joining the main river systems) and the local authorities would make decisions over small rivers (those not perennial in nature, originating from the Siwalik range), as well as springs.

This draft policy has not been presented in Parliament, and given the Coronavirus pandemic, is unlikely to be introduced soon, but it would be the first step to regulate the management of water issues in a federal framework.

According to this framework, the Tinau would be classified as a medium class river, even if it flows out of Nepal’s borders. It originates in the Mahabharat hills of Palpa district, meets the Dano river and flows past the city of Gorakhpur, in the Indian state of Uttar Pradesh. It is also desperately in need of cooperative water management.

The mayor of Butwal, Shiv Raj Subedi, said local governments are ready to pay upstream communities to protect the watershed, which provides drinking and irrigation water for downstream communities. “We are ready with money, so have asked the provincial government to prepare the necessary legal documents,” said Subedi.

Upstream representatives brought a delegation to meet the provincial minister for Industry, Tourism, Forest and Environment, Lila Giri, to facilitate the process of developing legal provisions but haven’t received any confirmation on when this will happen. “We are serious in this matter but we need to discuss and prepare an integrated watershed management plan that allows the local authorities upstream and downstream to work together,” said Giri.

Community members upstream are eager to use the money for watershed management and plan to invite representatives from upstream and downstream communities and local authorities and the provincial ministry to decide how to move forward. “There is confusion because the consumers are from Rupandehi and the watershed that they want to invest in is in Palpa district [at the source of the river]. In this case, the provincial government can play a vital role in coordinating among local bodies but we will take the lead in moving forward this proposal,” added Gurung, of the Dovan Community Forest User Group.

Declining river levels have affected the irrigation facilities downstream, worrying communities in the breadbasket of the region that produces rice, wheat, mustard, corn and other crops. During the winter season the water levels are so low it is hard to irrigate farms. Twenty years ago, 15-cusecs of water flowed in the Siddhaban area, now there are only 3 cusecs, according to Romani Pathak, former chairperson of the Sohara Chhatis irrigation system. The system used to irrigate 5,000 hectares (50 square kilometres) of land directly – now it only irrigates 2,500-3,000 hectares (25-30 square kilometres).  “As irrigation has become harder, people turn their land into housing plots and sell the land. Unplanned urbanisation has increased due to lack of water as people are less interested in agriculture,” Pathak added.

There used to be major floods along the river. According to Rabindra Lakol, there were big floods in the Tinau in 1961, 1971 and 1982. But nothing since then. “In the past there was plenty of water but now it’s hard to see wet fields, which are required for mustard plantation,” said Lakol. Half of the 700,000 people living in Rupandehi district rely directly or indirectly on water from the Tinau for irrigation and drinking.

Batauli Bazar was once a hub connecting the hills of central Nepal with the lowlands. Rapid migration from the hills began in the 1970s. Once a vibrant market city on the Tinau, Batauli is now deserted. The old habitation has lost its charm as the city has shifted to the left bank of the river and renamed Butwal.

At the same time the construction of the Siddhartha Highway to Pokhara and bridges over the Tinau led to a fresh wave of urbanisation. With the growing Maoist conflict, human settlements increased rapidly on the riverbank after 2002. There are now around 100,000 houses on the riverbanks.

Rabindra Lakol is in his eighties and has seen the dramatic changes along the river. “It used to be very difficult to cross the Tinau even in the dry season, but now you can’t see any water flowing, let alone swim in the river. Water has become a distant object, fish are not even in my recent memory.”

Bikram Rijal, who has conducted a study on fish in the Tinau, said there were 25 fish species in the river upstream of the city in 2015, down from 36 species in 2001.

People in the community forests on the banks of the river upstream are releasing fish fingerlings to try and revive the fish population. According to Dil Kumari Rokka, from the Bhutkhola Community Forest upstream in Palpa, the community released 3,000 fingerlings a month ago.  “The growing human settlement is the main problem of the Tinau. If protection programmes are not introduced downstream, there will be an existential crisis along the river,” said Rajesh Shrestha from Dovan village.

After water levels fell in the Tinau, the central government in Kathmandu began plans to divert water from the Kali Gandaki river in the north-east to the Tinau through a 30-kilometre-long tunnel.

This diversion project has sparked regional conflict. Gandaki province says it will reduce their water supply. The federal government plans to provide irrigation facilities to about 100,000 hectares (1,000 square kilometres) in Rupandehi, Kapilvastu and Nawalparasii districts by diverting the river. Former finance minister Bishnu Poudel says that the diversion project will ensure continuous flow of water in the Tinau for irrigation and electricity.

But the chief of Gandaki province Prithivi Subba Gurung is strongly opposed. “You will have to cut off our heads before you divert the river,” he said.

SAARC faces the pandemic; together?