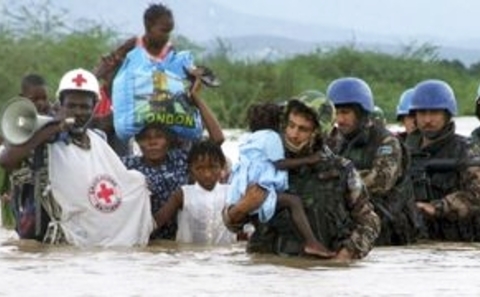 Major General Muniruzzaman is the president of the Bangladesh Institute of Peace and Security Studies in Dhaka. He has served as a senior officer of the Bangladesh Army and as an international peacekeeper with the United Nations and is a former military adviser to the president of Bangladesh. Here he talks to Isabel Hilton about the role of the military in responding to climate change, and the looming issue of climate refugees.

Isabel Hilton: In the last few years, I have noticed an increasing interest in climate change among military people. You see military establishments trying to address it, but is this the right approach? What has the military got to say about climate change?

Major General Muniruzzaman: The military is not very well informed about issues related to climate change because they are not tasked to deal with this. During the Bush administration [climate change] was a taboo subject in the Pentagon, so the US military never looked at it at all. Neither did other militaries around the world.

MGM: The securitisation of climate change is not in the hands of the military. This can only be done at a political level. I feel that policymakers are beginning to realise they will have to securitise climate change at some point. And when they do, the military will get involved. Then climate change has to be included in national security strategies in order for the military to react.

IH: Do you regard this as a positive development?

MGM: I regard this as a positive development because it is becoming inevitable and so we must be prepared for it. We can’t expect large or small militaries to get involved without preparation and without a change of mindset. The militaries that I talk to are not in the right mindset to accept this task. They are trained to fight a war, not climate change, which they don’t understand. So the first thing to do is to change the mindset of the military. They have to be trained, equipped and carry out simulations and exercises so they are prepared. If we just bring them in at the last moment they are not going to be able to help anybody. This will just create a bigger mess.

IH: How do you think the military can contribute?

MGM: In various ways. The military can handle situations that involve migratory patterns of people due to climate conditions. When there is a disease pandemic, or when emergency shelter and water is needed, there are a host of things that can best be handled by the military. They can also prevent conflict in destabilised areas. But the military cannot do this alone; they must be part of wider state response mechanisms. Mobilisation of civil society, government, [domestic] NGOs and international NGOs will have to take place, but the military should be a large part of it.

IH: Don’t you think there is a danger that in relying on the military to deal with the impacts, governments will lose the urgency on mitigation, and trying to prevent or alleviate those impacts?

MGM: Mitigation and adaptation responses must go hand in hand. Just because we are adapting, does not mean we can stop mitigation efforts. But in some areas of the world, for example in Bangladesh, we are beyond mitigation because the negative impacts of climate change are already being felt and will become more severe in the coming years. We must start building up our up capacity to respond immediately. The symptoms of climate change are very clear, so we must prepare for the worst now.

IH: Bangladesh is cited as one of the countries where there are likely to be large refugee flows. You have a large population and you are highly vulnerable. Your neighbouring country, India, has built a fence along your border and we are discussing the use of the military in just such a situation. How might this scenario play out?

MGM: I believe that climate change has already created a refugee situation in Bangladesh. We are seeing a trickle of internal migration within the country. When sea-level rise takes away about 20% of Bangladesh’s land mass, then we will see a major refugee population created by climate conditions.

The country is so small but densely populated that it will not be able to absorb these refugees. There will be a spill over migration, or an exodus of people walking towards India.  And as you know, the Indians have built a fence around Bangladesh. They are in the process of electrifying the fence now. This is about the most severe division between states anywhere in the world. Indian border guards kill innocent Bangladeshis on a regular basis if they approach the fence.

Given the current situation, wherever there is a flow of refugees trying to cross into India, tension and conflict will erupt. Any sort of destabilisation along a south Asian border is extremely dangerous because the region is both prone to conflict and nuclearised. Conflict along the border of India and Bangladesh is something the international community cannot afford to have. It will spill over and create dangerous conflicts in other parts of the world.

IH: So how can this scenario be prevented?

MGM: One way is to build up our capacity to adapt. Bangladesh is taking some small local steps. Larger adaptation can only happen when the international aid flows into Bangladesh. This help has been promised at various UN climate change conferences, but has not materialised so far. Another way is for Bangladesh, India and the international community to sit down and face the unpleasant truth and to build some kind of understanding about how this situation should be dealt with. The issue of climate-change refugees has not been properly addressed.

MGM: Nothing is happening between Bangladesh and India or internationally. Even the term “climate refugee” has not been accepted by the International Organization for Migration [IOM], the UN or anybody else. So in terms of the reality of managing this kind of migration and flow of refugees, we have not even started to scratch the surface. I think we have left this too late.

Bangladesh is fortunate in that, even if it loses 20% of its land, it will still have the mechanisms to function as a state. But countries like the Maldives will disappear altogether. We, as an international community, have not thought about the consequences of a country disappearing. What are the legal consequences? For example, the global maritime boundary regime will be completely altered when a country disappears. Would that space still belong to the people of the Maldives living somewhere else, or would it become international waters? There are many associated questions that we will have to face someday soon, but the international community is shying away at present.

IH: I am sure many people would consider your predictions alarmist. What would you say to them?

MGM: These predictions are based on current data from the 4th IPCC Assessment. We are not painting a doomsday scenario without data. I hope and pray that some of this data is wrong, but even if it is remotely correct we have to prepare. Any preparation will take a long time and will require international negotiation and internal preparation.

IH: I think it would be true to say that most countries spend more on their militaries than they do on low carbon technologies or on shifting their model of development. Isn’t there an irony there in terms of the kind of security challenges we are discussing?

MGM: There certainly is. It is quite ironic and sometimes self-defeating because what we are ultimately talking about is comprehensive security. There are other security challenges facing citizens: such as food, water, energy and a host of others. So we have to balance our security spending to ensure our people are safe. Unfortunately, global economies don’t work in this manner, and internationally, politics don’t allow us to behave in that manner. But many people realise that we have to reduce spending on hard military and build more resilience and a comprehensive security strategy.

Isabel Hilton is editor of chinadialogue