Erum Yasmeen, 44, stands on a mound of rubble overlooking a waterway choked with garbage, debris, and broken water pipes. She gestures towards the stream, the water of which is the colour of soot and hardly visible under mounds of plastic waste. This was where her home once lay, built by her father-in-law in the 1950s, back when Karachi was the capital of a new country. Now, the capital is 1,200 kilometres away and Karachi, home to 20 million people, is in the midst of a raging climate catastrophe.

In one example, nine inches of rainfall lashed Karachi in 12 hours on 27 August 2020. Containers, placed on thoroughfares as barricades for religious processions, turned into uncontrollable hazards, floating along streets that had transformed into rivers and ramming into cars and pedestrians who were wading through waist-deep rainwater.

Karachi is among the world’s least liveable cities, ranking 136th out of 140 on the Economist’s Global Liveability Index. Warning signs of the impending climate crisis ­have been compounded by local authorities’ reluctance to mitigate its harmful effects by building climate-resistant homes and buildings, and ensuring the upkeep and maintenance of the city’s storm-water drains, which are choked with plastic waste.

According to local activists, since February 2021 at least 12,000 houses have been razed along Karachi’s Gujjar Nullah – one of the many waterways crisscrossing the city on their way towards the Arabian Sea – including Yasmeen’s home in Kausar Niazi Colony.

The demolitions are part of the city authorities’ response to the climate crisis. They were carried out by the Karachi Metropolitan Corporation in response to a 2020 Supreme Court order, passed after that summer’s record-breaking rain. The order directed the National Disaster Management Authority, in tandem with the government of the province of Sindh, to remove “encroachments” along the waterway in an attempt to mitigate urban flooding. 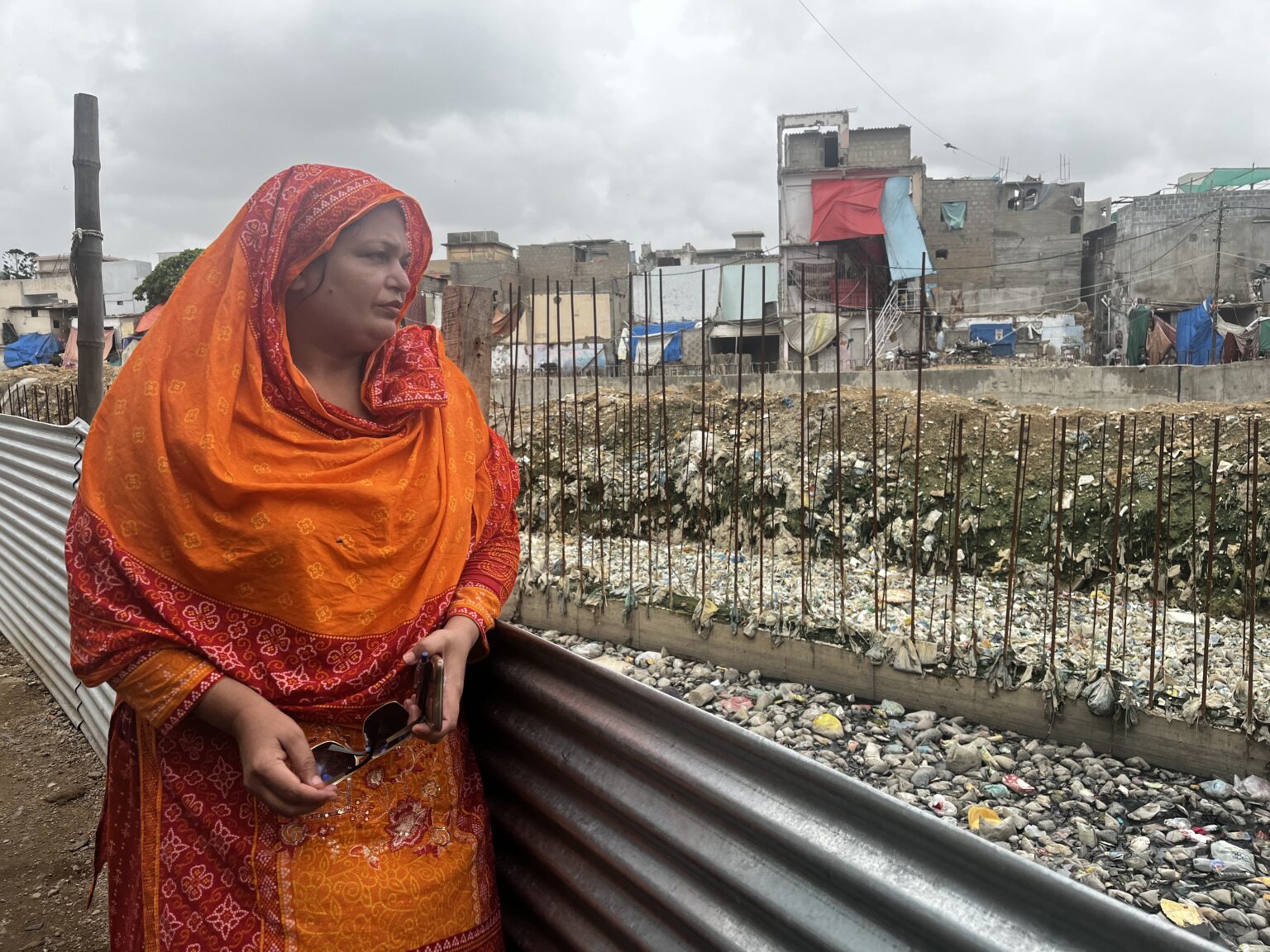 But when Karachi faced yet another spate of relentless rain earlier this year, the now-extended Gujjar Nullah waterway overflowed. Yasmeen says that when it rains in Kausar Niazi Colony – despite the widening of the nullah – water gushes into her home and her neighbour’s homes until it is waist-deep, bringing with it a plethora of diseases and mosquitoes.

There have also been fatalities. On 13 July 2022, 65-year-old Boota Masih was sitting outside his home, about a quarter of which was demolished last year, when he slipped and fell into the waterway below. Even though his community rallied and organised a rescue operation almost immediately, Masih did not survive.

A movement of demolition-affected city residents, Karachi Bachao Tehreek, is fighting back. In December 2021, the Tehreek published a survey comprising 354 responses collected from residents living along the nullah, which found that at least 45% of homes were constructed on leased and/or regularised property, challenging the notion that residents living along the nullah were encroachers.

Gujjar Nullah residents whose homes were razed say they have been denied the 90,000 Pakistani rupees (USD 400) promised by the government as compensation, and that municipal bodies responsible for issuing cheques – such the Karachi Metropolitan Corporation – have been giving them the runaround. 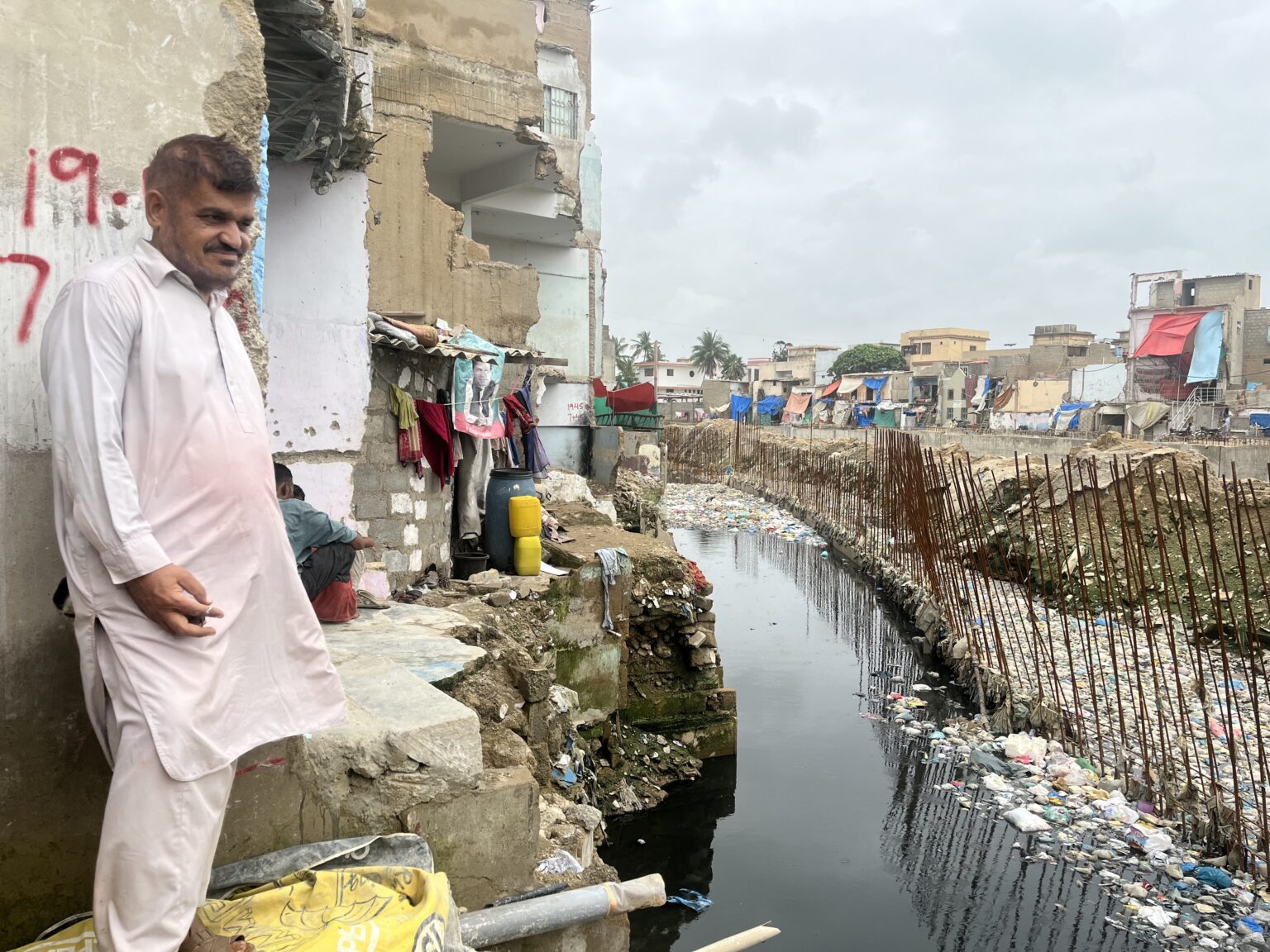 Shafiq and his wife Qamar live with their five children in a half-demolished home beside Gujjar Nullah. They say the demolitions have taken a toll on Shafiq’s health. (Image: © Zuha Siddiqui)

In late November 2021, the Sindh Environment Protection Agency (SEPA) announced that a public hearing would take place on the subject of an Environmental Impact Assessment (EIA) report for a project to revamp and restore the city’s stormwater drains. The report stated that no project shall commence until the assessment has been completed – yet this hearing was taking place 14 months after demolitions along the Gujjar Nullah began.

“What is the point now, of this assessment? An EIA preemptively measures risk,” Aadil Ayub, an activist associated with Karachi Bachao Tehreek, said to a handful of agency officials at the hearing.

SEPA’s response was that Karachi was in the throes of an emergency, given Covid-19 and floods, and that the federal government had pumped in money to “transform” the city. Consequently, the Agency thought it was prudent to forge ahead with the project and hold the hearing retrospectively.

A month later, in December 2021, the Karachi Bachao Tehreek organised a People’s Climate March to draw attention to the climate crisis brewing in the city, as well as the chopping up of coastal mangroves to build industrial zones and high-end homes, and the construction of expressways over stormwater drains. But the march was prevented from marching to Bilawal House – home of the chairman of the ruling party of Sindh, Bilawal Bhutto – by heavy contingents of police who blockaded and surrounded protestors on all sides. 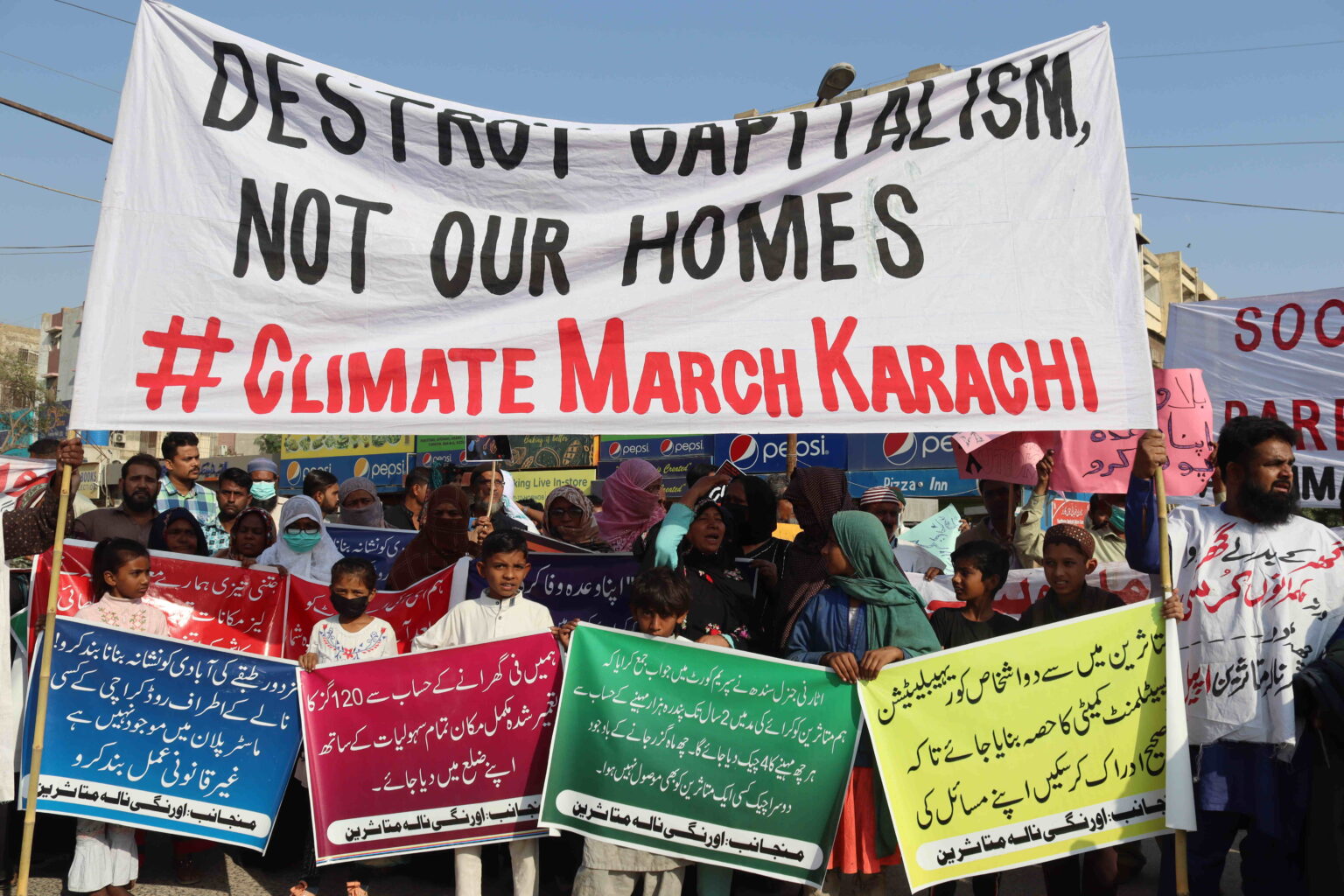 Time may be running out for Karachi. According to a study published in March this year, land in the city is sinking nearly five times faster than sea levels are rising.

In another recently published study, researcher and spatial data scientist Shamsa Kanwal found that rapid urbanisation, construction on reclaimed land along the coastline, and sewerage network breakage have all contributed to subsidence (sinking of the ground because of material moving underground) in Karachi.

“It’s as simple as a drainpipe collapsing, and over time, the ground around it will begin to subside,” she says. “It also doesn’t help that the Sindh coast is low-lying. In Karachi, you are already living at sea-level, and when sea-level rises even slightly, people living in the city are automatically at risk.”

An absence of data is hindering Kanwal’s work, she says. Her attempts to investigate city-wide correlations between subsidence and groundwater depletion have been thwarted by Karachi’s poor water supply infrastructure, exacerbated by the city’s rapid expansion and unauthorized hydrants. “Karachi has multiple sources of water supply and there are no consolidated statistics, no long-term data, and no numerical evidence,” she said.

In the areas she has managed to study, her research has revealed shocking results. Near the University of Karachi, Kanwal discovered a house that had sunk six feet below its initial foundation level. “You could see cracks in the walls, you could see that the elevation of the house was lower than all the other houses in the area,” she says.

But sections on Karachi in Pakistan’s National Disaster Management Authority’s National Monsoon Contingency Plan hinge solely on the “restoration of storm water drains”, with no mention of sea level rise, subsidence, or the swathes of million-dollar properties built along the city’s vulnerable coastline. “Execution work on Gujjar and Orangi Nullas is going on at [a] fast pace,” the plan states. “Once implemented, [it] will give well-needed respite to the populace of Karachi.”

“There’s so much happening in tandem in Karachi,” says Kanwal. “Sea level is rising, there is coastal erosion, subsidence, there’s also the broken sewage network, groundwater is depleting. It is really complicated and requires immediate attention.”

This article was first published by Unbias the News. It is part of the Sinking Cities Project, which covers six cities’ responses to sea-level rise. The investigation was developed with the support of Journalismfund.eu, European Cultural Foundation and the German Postcode Lottery. It has been edited for length and reproduced here with permission. It cannot be republished without permission.

Roundtable: After COP27, what’s the path to climate resilience for Pakistan?

Dengue surges in waterlogged Pakistan in wake of floods

Opinion: Working with local knowledge only way to save Pakistan from flood disasters