In Pakistan, more than 70% of domestic water needs are met by groundwater, a freshwater source literally under our feet. But groundwater resources are often poorly mapped and managed, and are being depleted at alarming and unsustainable rates.

This year, as Pakistan has struggled with the ongoing impacts of catastrophic flooding, its capital Islamabad saw a substantial replenishment of its groundwater resources, thanks to artificial recharge wells.

Between September 2021 and June 2022, 50 artificial groundwater recharge wells were dug in Islamabad. The first functioning well was inaugurated on 24 June in the city’s Kachnar Park, having been developed by the Pakistan Council of Research in Water Resources (PCRWR) in collaboration with the International Water Management Institute (IWMI) and WaterAid. The other wells have been developed by the Capital Development Authority (CDA), which provides municipal services including water supply for Islamabad’s residents.

According to a survey conducted by the PCRWR, 1.9 million gallons of water were recharged into the city’s aquifer when 589 mm of rain fell between May and September this year.

“Work on setting up an additional 50 new recharge wells is underway, with full force,” says Sardar Khan Zimri, deputy director-general of water supply at the CDA. By the end of 2022, Islamabad should have 100 groundwater recharge wells in different locations, he told The Third Pole.

Given that there are multiple aquifers under Islamabad, experts estimate that thousands of wells will be needed to make a real difference to the area’s groundwater supplies. But initial signs of success in replenishing groundwater in an urban area could have major implications for Pakistan.

How does an artificial groundwater recharge well work?

Recharge wells collect rainwater in a pond dug next to the well, filled with layers of gravel and sand. Water from the surrounding area collects in the pond, and filters through these layers, to be directed into the well itself, which sits above the water table.

Islamabad’s new groundwater recharge wells are equipped with instruments that measure water levels, water quality and the amount of rain that enters the aquifer, and send real-time data to IWMI and PCRWR scientists for analysis.

Purposefully storing water underground – a concept known as ‘managed aquifer recharge’ (MAR) – has been around for over a century, but it has gained renewed importance in recent years, as growing water demand and the climate crisis put increasing pressure on aquifers. 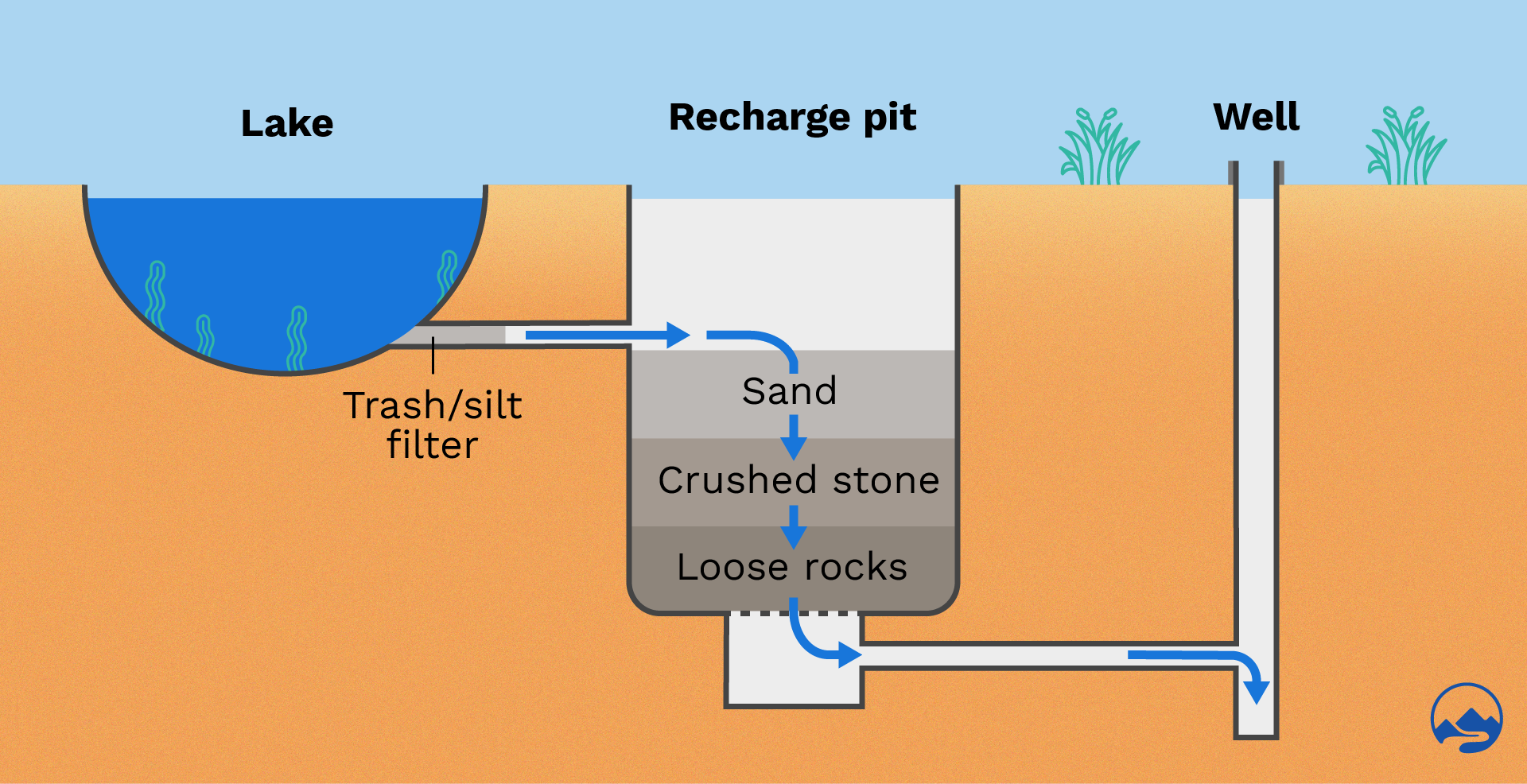 According to the 2017 census, Islamabad’s population is now over 2 million, nearly two and a half times what it was in 1998. This has put a severe strain on the area’s water resources.

The primary sources of water for the city are surface and groundwater. According to Zimri at the CDA, the authority currently supplies about “70 mgd [million gallons per day], while the ideal requirement is 110 mgd”, or around 35 gallons (132.5 litres) per person per day. The World Health Organization suggests that 20 litres per day are needed to take care of basic hygiene and food needs, excluding bathing and laundry.

Currently the CDA supplies water on rotation. A big home, office, or shop receives 4.5 hours of water every other day. If the CDA had 110 mgd of water supply, it could provide a constant water supply, says Zimri. This had been the case prior to 2000, after which Islamabad’s water demand started outstripping supply, leading to shortages.

Increased groundwater withdrawal has resulted in a drop in groundwater levels, says Arif Jabbar Khan, country director at WaterAid Pakistan. He says the average annual rainfall in Islamabad is about 1.3 metres, whereas groundwater depletion stands at around about 1 metre per year. Increased cement cover and the destruction of wetlands have reduced the ability of rainfall to seep into the ground and recharge groundwater.

“Migration into Islamabad, horizontal expansion and mushrooming of legal and illegal housing societies have taken a toll on sanitation and hygiene,” says Khan.

Water quality has also been affected. Huma Khawar, a long-time Islamabad resident, remembers drinking water straight from the kitchen tap well into the 1980s. “By the 1990s we started boiling water and by 2000, we started filtering our water,” she says. Today, she only lets her grandchildren drink bottled water.

The rapid expansion of the city has created other water-related problems. In the last few years, some parts of Islamabad have seen increased flooding. With more paved and built-up areas, run-off from heavy rain enters stormwater drains, and when they overflow, low-lying area in the Islamabad-Rawalpindi area are flooded.

As they help to capture and store rainfall, recharge wells could therefore offer a solution to multiple problems.

“Not only have these [recharge wells] proved to slow down the groundwater depletion rate … the 1.9 million gallons that went back into the earth would otherwise have gone into Nullah Lai, a rainwater-fed natural stream. [This helped] in averting its annual flooding,” says Naveed Iqbal, director of hydrology at the PCRWR.

Zimri agrees that Islamabad’s recharge wells helped to reduce flooding this year. “This area [around Kachnar Park] remained dry and water did not get into the residences around these roads, like it did in previous years,” he says.

According to the Pakistan Meteorological Department, nationwide rainfall in July 2022 was 180% above average, making for the wettest July since 1961. With predictions of even heavier rains in future due to weather aberrations driven by climate change, digging wells looks to be good preparation for an uncertain future.

But to make a real difference in offsetting groundwater extraction, Iqbal says the wells need to be scaled up to “maybe 5,000 or even more in Islamabad alone”.

An example for other cities?

Muhammad Ashraf, chairman of the PCRWR, is convinced that with “modification”, Islamabad’s experiences with recharging groundwater can be applied elsewhere. “I am absolutely certain this technology can be applied in a city like Karachi, [which is] prone to urban flooding even at the slightest rainfall,” he says.

Soil and rock composition of the aquifer are important factors influencing choice of location for recharge wells, says Basharat Saeed, a water resources specialist at the World Bank. “Parts of the aquifers with thick alluvial layers are better at naturally transmitting and storing water than those with thick strata of limestone,” he says. Since Islamabad has both, the location of recharge wells should be informed by an “understanding of the underlying hydrogeology and its variation across the city”.

“This makes the collaboration of CDA with renowned national experts on groundwater a welcome initiative,” says Saeed, lauding IWMI and PCRWR’s efforts.

Describing recharge wells as one of the easiest and most cost-effective ways to replenish Pakistan’s underground aquifers, especially when the country is in the throes of climate-induced catastrophes, Ashraf is convinced of their value. “These [wells] are needed for every city, every town, every village,” he says.

To save Pakistan, look under its rivers