The worst floods in living memory in Pakistan have already resulted in more than 1,100 deaths, including more than 350 children. The floods have affected up to 33 million people, and the Flood Response Plan now has the daunting task of providing relief to 5.2 million people. Referred to as a “monster monsoon” by Pakistan’s climate change minister Sherry Rehman, the floods have left more than one-third of the country underwater.

It will be some time before the full cost of the damage is known. But with infrastructure damaged across the country, provisional estimates suggest the losses could total around USD 10 billion. 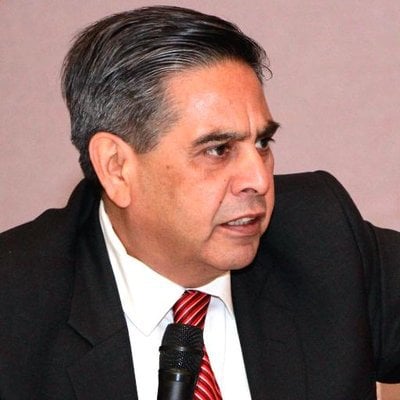 As one of the most climate-vulnerable countries in the world, extreme weather events are a challenge Pakistan will be forced to grapple with, despite contributing less than 1% of global greenhouse gas emissions. But could the sheer scale of loss and damage in the 2022 floods have been avoided? What is being done to avoid this happening again in the future?

The Third Pole spoke with Ali Tauqeer Sheikh, one of Pakistan’s leading experts on climate change, development and climate risk management, about the 2022 floods, their causes, the response so far and the way forward.

The Third Pole: Pakistan used to face flooding every few years. But since 2009 floods have happened almost every year. Is the frequency increasing? And why is the devastation rising?

Ali Tauqeer Sheikh: This is a complex question and has many grey areas. Compared with droughts, heatwaves and glacier melts, which can be clearly attributed to climate change, floods are more complex and harder to attribute to climate change.

Stronger monsoons result in higher precipitation, and the monsoons are getting more severe. So climate change is a factor. We have also had torrential rains in Sindh, run-off floods in Balochistan, urban flooding in cities like Karachi and Hyderabad, flash floods in south Punjab and lower Sindh, and glacial floods in Gilgit-Baltistan. All this shows that due to climate change, the monsoon has changed its traditional passage, and this will have long-term implications for human security in Pakistan.

But we cannot place our finger on just climate change as the main reason for an increase in devastation from floods. While the increase in floods is very strongly linked with climate change, and climate change is a threat that is multiplying for us, most of the losses incurred during flooding are often actually due to poor governance and a weak economy. We are not weaving climate change into our planning. Until we do that, our vulnerability will continue to increase.

A recent report on climate impacts, adaptation and vulnerability by the Intergovernmental Panel on Climate Change shows that climate impacts are globally hitt­i­­n­­­­g much faster than projected by earlier reports. Pakistan should have heeded the warnings.

If one makes a graph showing losses from heavy floods in Pakistan, like those in 1995, 2003, 2007, 2010 and 2022, against population numbers too, it would be evident that the losses from riverine floods increase as the population increases.

If people settle and build houses on river banks, and if the governance is so weak that instead of stopping them it encourages them to settle there, building schools and hospitals and providing electricity connections, it means the state is institutionalising this vulnerability, and the government is exacerbating it with its weak governance.

So are we seeing a vicious cycle of climate change-induced migration, with communities settling where they shouldn’t?

Yes. I wouldn’t like to go and build a house in a vulnerable area near a nullah [drain or small water body]; the underprivileged don’t like it either, but they are forced to live in vulnerable areas. These areas are more vulnerable to floods, mud slides and snow storms. The issue [of flood damage] becomes more complex due to population increase, the areas they are settled in, and the kind of housing they have.

Part of the reason [for the flood damage] is climate change, part of it is poor infrastructure and poverty, and part of it is a combination of the two. When we fail to understand something or we don’t want to work on a certain area, we pin it on climate change [alone].

The real impact of climate change is lower agricultural productivity, and decreased resilience. For example, when drought hits Tharparkar [a district in Sindh province], people go and settle somewhere else to survive. They move to big cities and try to build houses near nullahs to escape droughts. It’s like out of the frying pan into the fire. You left your home to escape poverty but now you are even more vulnerable.

In their own areas, they at least have social capital; in new areas they become marginalised. There is no security net in terms of money and back up.

Why has Karachi been devastated?

Because the infrastructure is inadequate. If this amount of rain hit any well-developed city, nobody would know anything because their infrastructure is large and functioning. Instead, we’re still relying on pipelines for drainage that were laid during British rule [before 1947], for a population of 46,000 people in Karachi. Now the population is 24-26 million, while the official census shows a lesser number.

Rains in Sindh and Balochistan have broken a 62-year record. Why has Balochistan been so badly and unexpectedly hit by these floods?

I recently wrote about this: a rise in sea level has increased coastal flooding, while higher temperatures at sea give clouds greater ability to travel further over land, which includes even those parts of Balochistan where we did not have flooding earlier. The increasing frequency of flooding in Balochistan can be attributed to these westerly weather influences, rather than the traditional eastern monsoon originating from the Bay of Bengal. This change in the weather cycle seems to have added to the frequency and severity of floods in the typically non-monsoon areas of Balochistan.

Does Pakistan have any proper disaster management plans?

The issue is that our planning is top-down, under the assumption that one size fits all. If you have a specific requirement for a particular neighbourhood, policymakers don’t have the knowledge, patience, or resources to tackle it. We don’t have strong institutions in local government, and these were perhaps kept weak for various reasons. Right now, there is a void at the local level.

The government should enforce rules and make cash reimbursement conditional with living in safe zones.

If more resources go to the provinces, this can strengthen provincial capacity, as we have seen since the Eighteenth Amendment [which gave more autonomy and resources to provincial governments]. Provinces need to transfer resources to the third tier of government at district and sub-district levels.

What should be the way forward, when we enter the rehabilitation phase?

There is a conflict between the urgent and long term. Those affected by the floods don’t have a roof over their heads and their standing crops have been destroyed, so they do need urgent help, and it is in the interest of the government to provide them that. But people like us want to see long-term resilience.

More often than not, building back better gets forgotten; meanwhile, some other crisis hits which diverts the policymakers’ attention.

A good example of building back better was when after a recent flood in Canada, the government said that it will support and compensate affected people if they don’t build houses in the same coastal areas. It linked cash reimbursement with building back better.

In Pakistan, if someone becomes homeless due to floods, the government says, ‘take 15,000 rupees and rebuild’. But the house will be destroyed next year again due to floods as it’s in the same fragile areas. The government should enforce rules and make cash reimbursement conditional with living in safe zones.

There is a need to create a balance between relief and rehabilitation. But we channel all of our generosity only towards relief.

How important is a strong infrastructure and building better to avoid loss in the future?

We need guidelines that will help mud houses become stronger, and help their roofs withstand climate change instead of collapsing. Whether plazas, or houses in rural areas and shanty towns, you need to have a standard for building them. For infrastructure we need guidelines that respond to the growing need to deal with floods and disasters.

So far, we have not increased our adaptation, and as a result have not reduced our vulnerability to floods and other disasters. At the heart of it, we are a climate-vulnerable country, and we desperately need adaptation strategies to avoid this level of loss and damage.