Oyunchimeg Dechinlhundev lives in the outskirts of Mongolia’s capital, Ulaanbaatar. She makes a living from raising chickens and geese, and growing vegetables.

“When I was a child, 10 days of rain never flooded our street,” Oyunchimeg, who is in her late 40s and has lived here her entire life, remembers. “But several times in the past decade 10 minutes of rain have destroyed everything I planted.”

Flooding caused by heavy rain has destroyed her crops and killed her chickens on multiple occasions. “Now, we panic and worry when the rain starts to drop,” Oyunchimeg says.

Mongolia’s rainiest period is between July and August

In an attempt to prevent the damage, every year at the start of summer she and her neighbours reinforce their fences with barriers made from earth.

Rainfall patterns have changed in Mongolia over the past 40 years, meteorologists have found. While overall the country receives the same amount of annual precipitation, deluges are replacing the light rain that previously would fall for more than a week. This has negative consequences for the wildlife and livestock on Mongolia’s grasslands, as well as people living in its fast-expanding cities.

In 2004, only nine incidents of heavy rains and floods were recorded by Mongolia’s National Emergency Management Agency (NEMA). In the 18 years since that number has risen, with official data recording 72 disasters just last year.

Mongolia’s average temperature has increased by 2 degrees Celsius over the past 70 years, according to the National Agency for Meteorology and the Environmental Monitoring.

Dulamsuren Dashkhuu, senior researcher and director of the Climate Change Research Department at the Information and Research Institute of Meteorology, Hydrology and Environment, a government agency in Ulaanbaatar, explains that hotter temperatures mean more evaporation. More humidity in the air means more frequent and intense rainfall and cloudbursts – an impact of climate change.

The Mongolian Plateau is cold and dry, and annual precipitation ranges from 50 to 400 mm. For thousands of years Mongolian nomadic herders have adapted to the harsh conditions. But recently, they have had to cope with more erratic weather as sudden downpours and long periods of drought become more frequent.

This is leading to a cycle of droughts, floods and the degradation of pastureland, says Dulamsuren. “When heavy rainfall falls on dry soil, it never goes deep into the soil. Instead, the rainfall flows away or washes away the soil, or even animals and gers [traditional Mongolian yurts, which also translates as ‘home’],” she explains. According to NEMA, between 2004 and 2021 over 75,000 livestock were lost because of flooding and heavy rain. 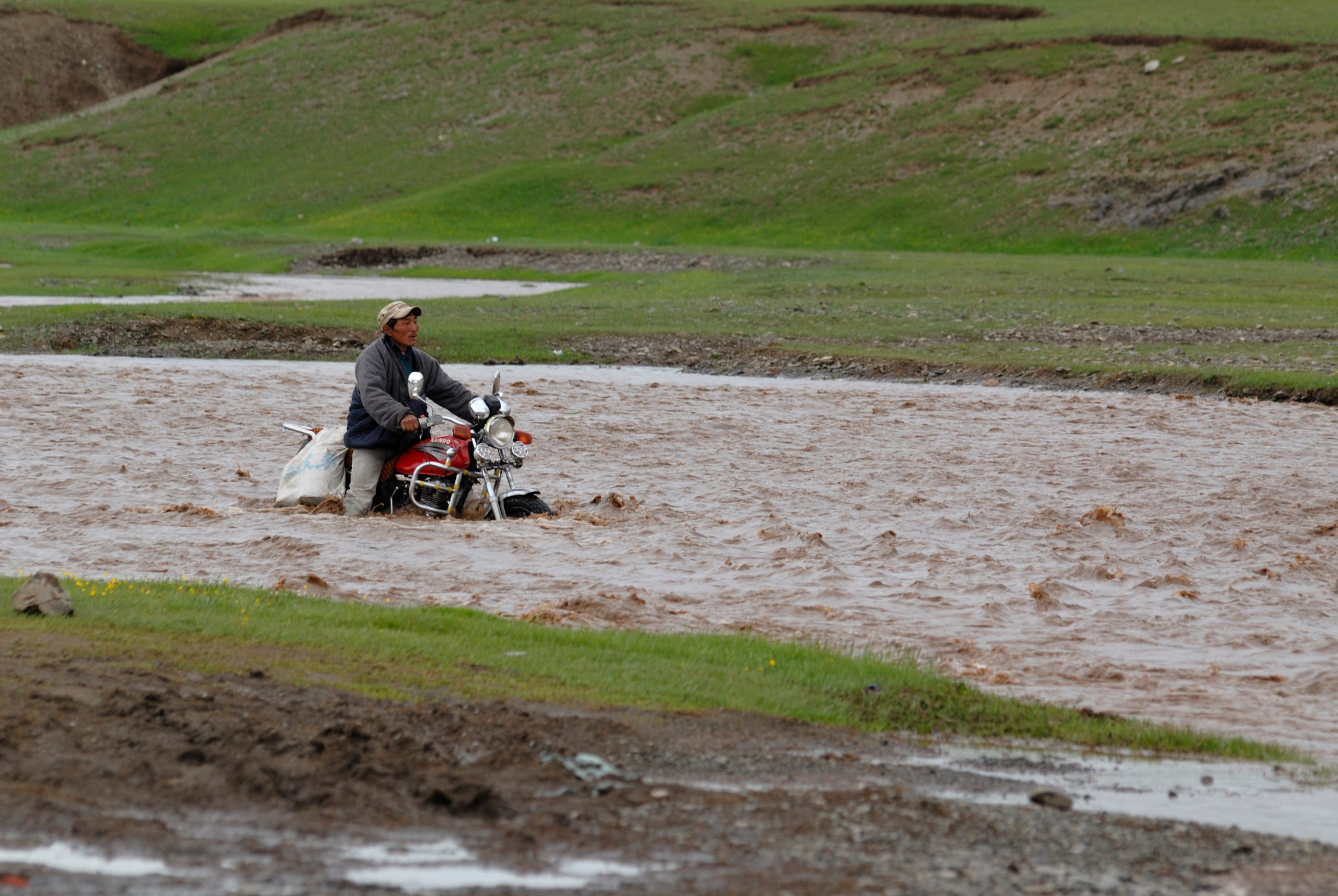 A man on a motorbike tries to cross a flooded river in Övörkhangai province, southern Mongolia (Image: Olaf Schubert / Alamy)

In 1991, nomadic households accounted for more than half of the population, data from Mongolia’s National Statistical Office shows. As of 2020, they were only 26%. In the past 30 years, extreme harsh weather events called dzuds have become more common, with climate change one of the driving factors, scientists have said.

What is a dzud, and what causes it?

A dzud is a combination of conditions over a year on the Eurasian steppes, which result in mass livestock die-off in winter or early spring. Earlier in the year, drought might mean a lack of vegetation for animals, so they do not grow and develop the fat and reserves they need.

Next, an unusually severe winter that occurs, which changes the amount of snow and ice covering pasture. This might involve heavy snow, not enough precipitation, pasture being frozen or extremely low temperatures, but the result of each scenario is that livestock are negatively affected. Climate scientists believe drought is a factor that makes dzuds more likely, as well as man-made influences such as overgrazing of pastures.

Between 2000 and 2014, about 30 million livestock were killed due to dzuds in Mongolia, with economic and social impacts for herders.

Although the reasons for rural-to-urban migration are multiple and complex, a common thread is that following the loss of their animals, herders have moved from Mongolia’s pasturelands to the provincial capitals, with newcomers flocking to the biggest cities of Ulaanbaatar, Erdenet and Darkhan. Between 1990 and 2021, official data shows, the population of Ulaanbaatar nearly trebled, growing from 590,000 to 1.6 million. (It is likely much higher in reality, the result of a ban on new inflows in 2017-20 that has resulted in large numbers of unregistered residents in informal settlements.)

A UN International Organization for Migration study in 2018 found that migrant families settle where they can afford to live – normally in a city’s outskirts, without access to central heating, running water and the sewage system. Their gers have expanded the areas of slum and informal housing, called “ger districts”.

The cheapest or free sites are on the slopes of hills or valleys – the sites most exposed to environmental hazards such as sewage runoff and flooding.

In Mongolia’s harsh winters, gers are sturdy against the wind and keep out the cold. But these domed tented homes are easily damaged by running floodwater and can be washed away.

Since 2004, more than 3,500 gers have been destroyed by floods and heavy rain in Mongolia; over half of this damage occurred in just the past four years, according to NEMA.

Changing rainfall patterns around Ulaanbaatar, combined with urbanisation, have resulted in an increase in flooding around the metropolis. Jambajamts Lkhamjav from the Department of Meteorology and Hydrology at the National University of Mongolia says that previously just over 10 incidents of light rainfall per year “was the norm” for the city, which received about 400 millimetres of annual precipitation. “However,” he says, “after 1990, only up to five [incidents of] rains, with stronger fall rates, were recorded.” Cloud formations around the city have changed, he says, explaining that “light rain falls from low-level horizontal clouds, but heavy rain falls from vertical clouds. In Ulaanbaatar, 16 km-tall [vertical] cumulonimbus clouds are commonly observed while we don’t see lower horizontal clouds anymore.” 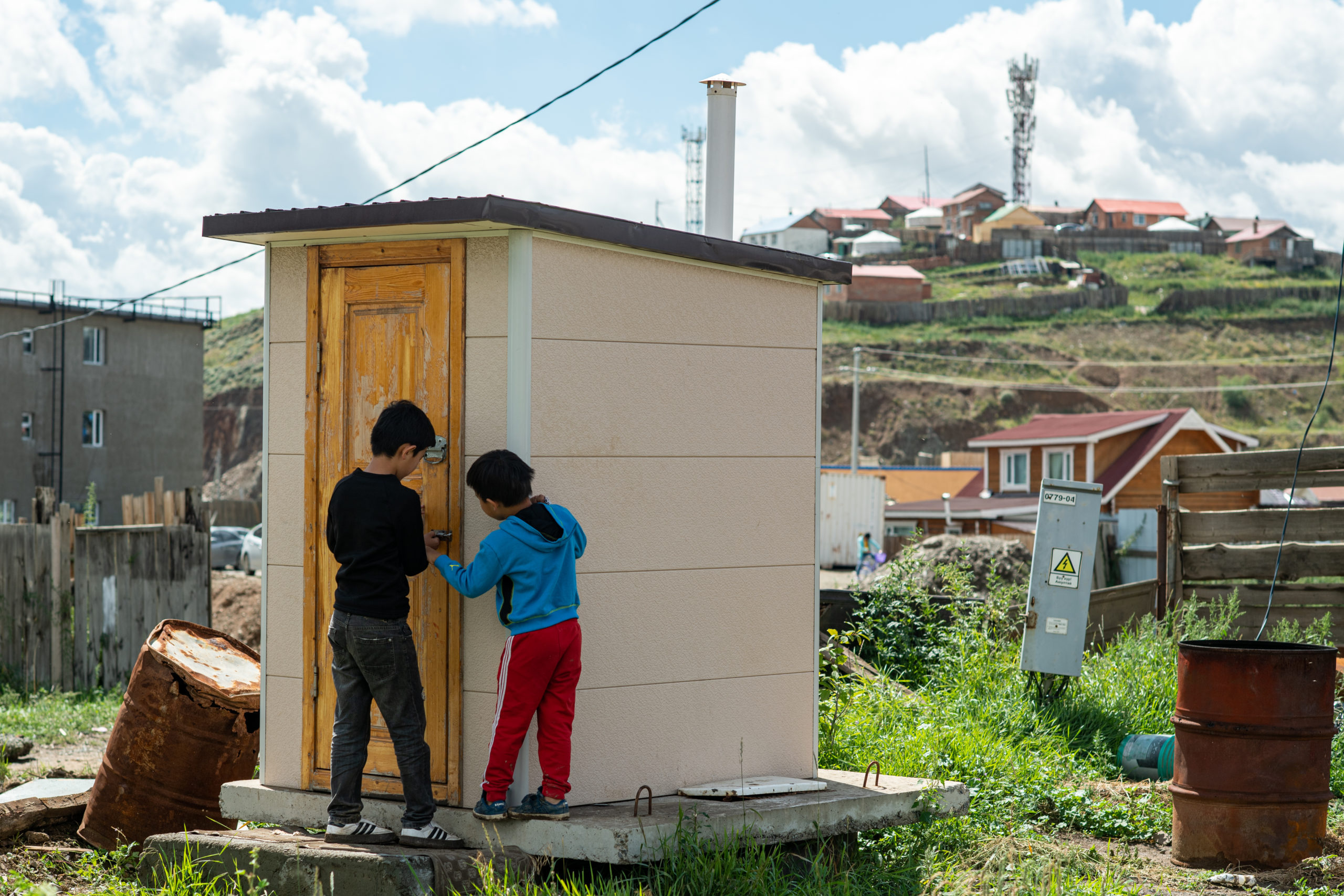 August 2022: Children in Bayanzürkh district, Ulaanbaatar, lock the door of a toilet built under a United Nations project. Lack of sanitation infrastructure in the city’s ger districts leads to disease outbreaks during the rainiest seasons. (Image: Byambasuren Byamba-Ochir / The Third Pole)

Mother-of-three Munkhtuya Tumurkhuyag lives in the same ger district as Oyunchimeg Dechinlhundev and has experienced the harsh impacts of the city’s changing weather first-hand. Three years ago in July, floodwater streamed through her house. She and five of her neighbours had to be hospitalised shortly afterwards with diarrhoea and vomiting, where they were told they had dysentery. “So much water and faeces came through our window. We were vomiting and had chronic diarrhoea. Plus we got pneumonia because of the cold,” she says.

The floodwaters, Munkhtuya says, swept away pit toilets used by people living in the hilly ger districts and brought the raw sewage downhill, to where her house is.

Every year for the past five years, dysentery, salmonella and hand, foot and mouth disease cases have peaked between June and August, data from the Mongolian government’s Health Development Center shows.

Munkhtuya’s house has not flooded since 2019, as a United Nations Human Settlements Programme project installed three sewage systems in the ger districts.

But Munkhtuya’s experience points to the wider problems experienced by a city whose population has grown quickly without accompanying infrastructure development. Ulaanbaatar lacks roads, electricity lines and sewage systems. Earlier this year the city’s mayoral office announced that the Ulaanbaatar city authorities have been building new sewage systems, but it has also said the city still needs to build a 300 km sewage system and water reservoir. 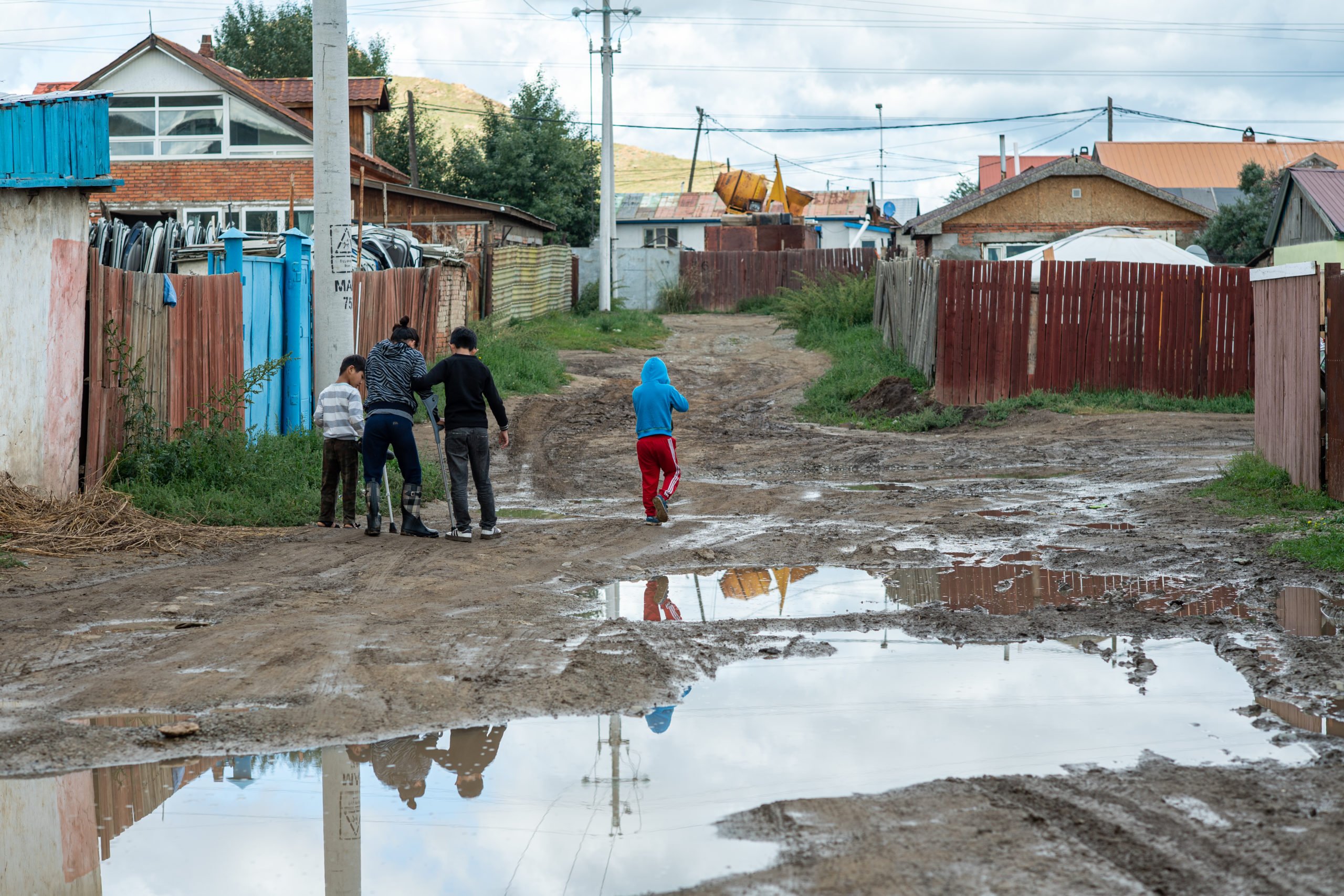 August 2022: Neighbourhood children help Nandintsetseg Mygmarbaatar, who is disabled, as she walks down a muddy street in Bayanzürkh district, Ulaanbaatar. Residents say that in the past the city received long periods of light rain, which would not flood the streets. (Image: Byambasuren Byamba-Ochir / The Third Pole)

The city’s changing weather and lack of infrastructure have multiple societal and public health impacts. Nandintsetseg Mygmarbaatar, 34, is disabled and walks with a crutch. After heavy rain her street floods and becomes muddy, and her crutch slips easily. She says she has fallen about a dozen times and broken her ankle and elbow.

“Once our streets have been flooded, muddy puddles linger here the whole summer,” says Nandintsetseg. “Sometimes the local authorities dump some dirt to dry up the puddles, but then it floods again. Elders or people like me are forced to stay home for our safety.”