For the past two decades, China has been in the midst of an unprecedented dam-building boom, developing over 300 gigawatts (GW) of hydropower. But coal-fuelled development in many of its cities has left them choking from air pollution and lent urgency to alternatives such as solar, wind, nuclear and hydropower. China has the world’s largest potential hydropower resource and could develop around 540 GW, as part of efforts to decarbonise the country’s economy.

Much of China’s hydro boom has occurred in the southwest where steep rivers, narrow gorges, and heavy runoff combine to create a dam-builder’s paradise. Here, another less important driver has been anticipated demand in Southeast Asia, especially Thailand and Vietnam. Major Asian rivers such as the Mekong, Salween, Yangtze, Brahmaputra, Red, and others rise in Tibet before flowing southward or eastward, and dam planners are now realising long-held plans to harness the energy of those rivers before it is “lost” to the sea.

Indeed, for nearly three decades, China’s Yunnan province has been billed as a “battery” not only for southern China but also for downstream neighbours Vietnam, Laos, Cambodia and Thailand. Between 2000 and 2016, Yunnan’s hydropower capacity grew more than tenfold to 62 GW, not far off that of the US and Canada (~79 GW each) and greater than Russia and India (~49 GW each).

But is it too much? Probably, at least in the short to medium term. Our research shows that installed hydropower far outstrips demand in China and Southeast Asia. So why is there a continued push for large scale hydropower development in the region? And can excess hydropower be used to displace polluting coal plants and reduce pollution?

Yunnan isn’t the only regional hydropower battery. Laos, Myanmar, Bhutan, and northeastern India have all earned similar appellations in the regional geography of gigawatts.

Yunnan and its downstream neighbours now boast around 91 GW of installed hydropower capacity, a figure surpassed only by China as a whole, and Brazil. 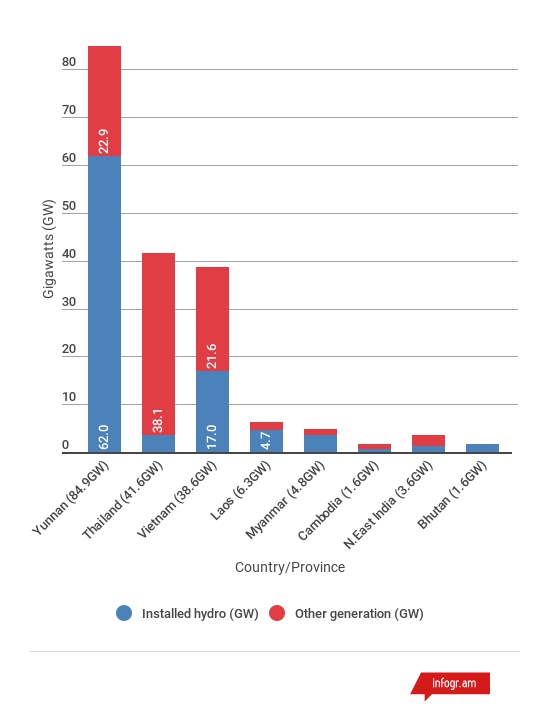 Much of the recent hydropower construction in Yunnan (1990s-2000s) was facilitated by improvements in road and other infrastructure in the mountainous province. While predicted demand growth in the then newly-minted Greater Mekong Subregion (GMS) led to supportive policies like “Send Yunnan Electricity Outward”, anticipated demand growth was slow to materialise in Thailand and Vietnam, especially in the wake of the Asian Financial Crisis of 1997.

However, demand in China continued to grow, and power shortages across southern China, including in the Pearl River Delta manufacturing hub, persisted through the mid-2000s. That growth helped spur development of hydropower in the mountainous southwest and the long-distance transmission lines to move that electricity eastward.

Electricity production in Yunnan (262 TWh in 2015) far exceeds consumption within the province (approximately 167 TWh), with the rest exported mostly to Guangdong (93.5 TWh) and downstream neighbours in Southeast Asia (1.4 TWh). Yunnan Power Grid indicated that an additional 95 TWh were potentially available but not utilised during that time, a staggering amount of wasted electricity comparable to the entire hydroelectric generation of 105 TWh in mainland Southeast Asia.

Comparison of electricity generation and consumption 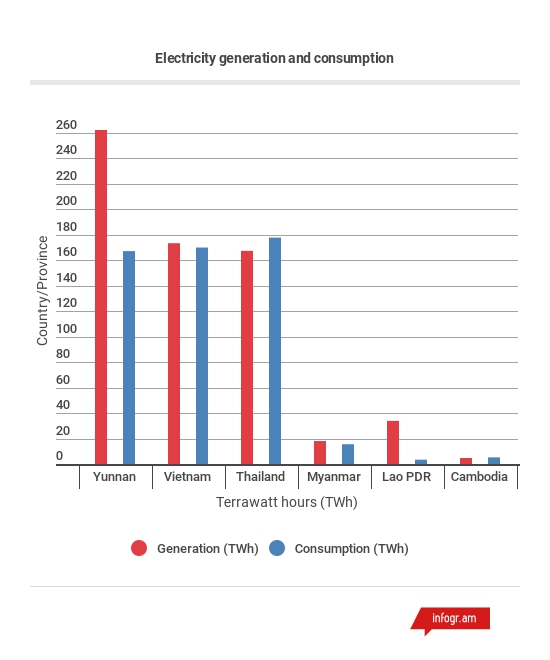 Within Yunnan there is now a power struggle over the fate of its hydroelectricity. Some actors, such as grid operators want to export power to other provinces and countries while others, such as local electricity-intensive smelters, want preferential access to it within the province. 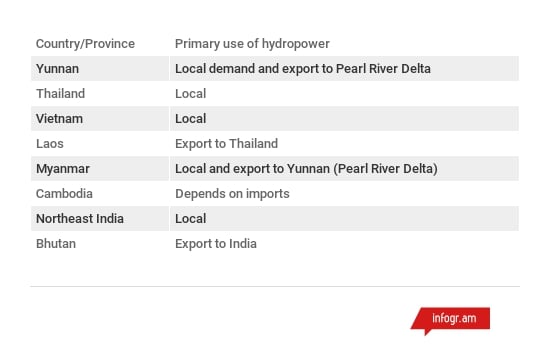 It is important to understand the regional hydropower boom in the broader context of the countries’ energy portfolios. Nearly all the countries are developing conventional thermal plants alongside hydropower and intermittent renewables, such as wind and solar. Two exceptions are Bhutan, which at a meagre 1.6 GW is in the early stages of what will likely be a major hydropower development push, and Thailand, which has not seen significant hydropower build-out since the 1970s.

From a macro perspective, Thailand, Vietnam, and Yunnan all have comparable electricity consumption, with each demanding 160-180 TWh annually. Vietnam’s demand is growing much faster, meaning that in a few years it will be the largest electricity consumer in the study region. Yet while demand in Thailand and Vietnam is driven by a broader industrial development, Yunnan’s is mainly driven by electricity-intensive industries such as aluminium and silicon smelters, which take advantage of cheap hydroelectricity (especially during the rainy season) and of Yunnan’s rich non-ferrous metals deposits. But the commodities produced by those electricity-intensive industries are traded on a highly volatile global market, making such investments risky. That risk is exacerbated by Yunnan’s landlocked, peripheral location, which increases the costs of transporting those commodities. 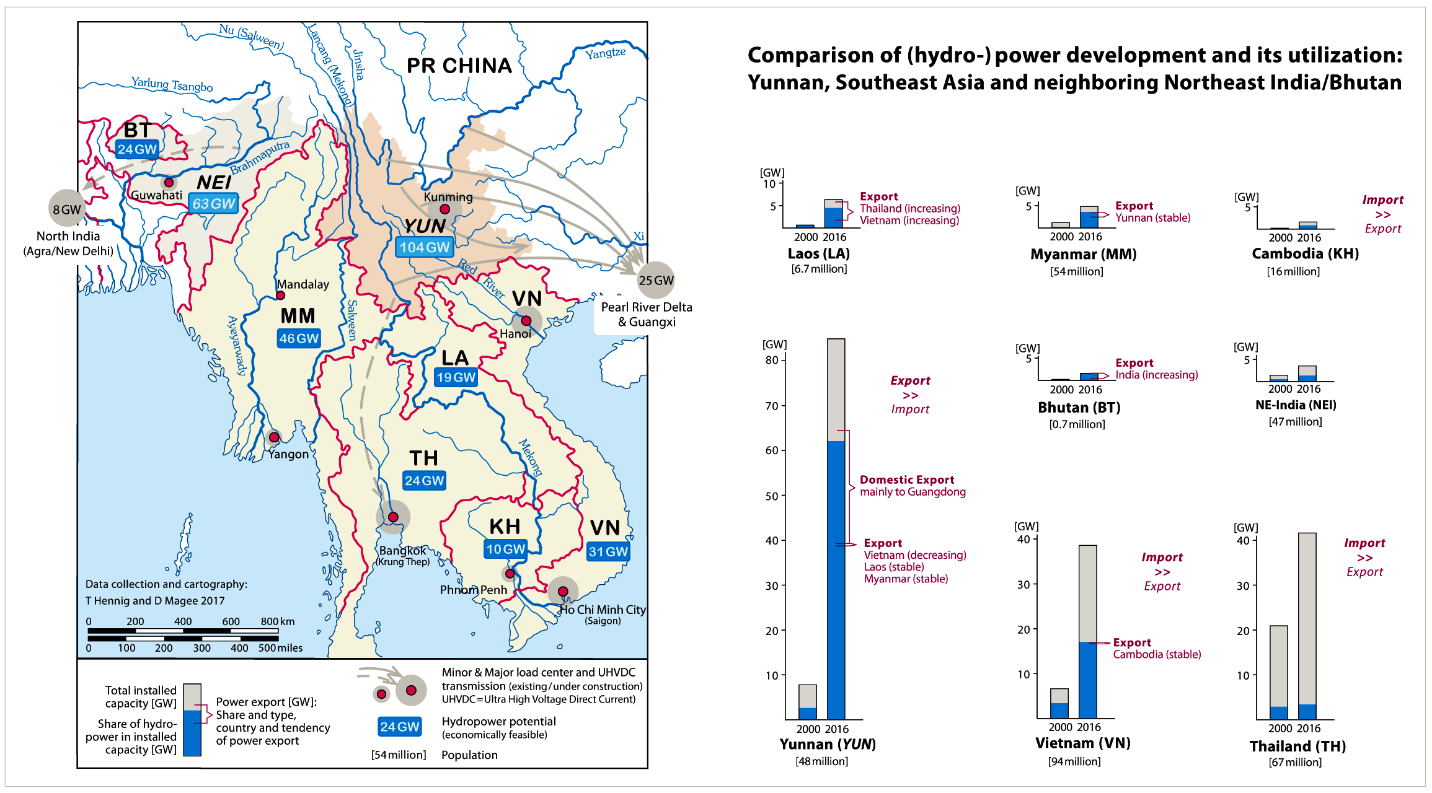 Given the economic slowdown and shift in the Chinese economy toward greater reliance on services, it is likely that the growth in electricity demand will continue to flatten. Even so, it may be slower in Yunnan given its heavy dependence on electricity-intensive industry and the continued interest in electricity planners in the region to bolster the province’s export capabilities. World-class, ultra-high-voltage direct current lines already bypass local grids and connect Yunnan’s hydropower stations directly to load centres in Guangdong.

The long-delayed Nu (Salween) River cascade must also be seen as part of the powershed of Guangdong and the Pearl River Delta, although actual work on those dams – likely four of the original 13 – may not begin until the next Five-Year Plan.

Yet the attractiveness of Yunnan hydro will likely decline as a power source for Guangdong , where nuclear power is set to rise from 6.3 GW to 16.3 GW by 2018. Given the high utilisation rate of nuclear power (capacity factor) and lack of seasonal fluctuations, it will likely be seen as more reliable and less risky than electricity from hydropower facilities up to 2000 kilometres away.

Yunnan’s exports to its Southeast Asian neighbours will continue to be modest compared to Guangdong. Also those neighbours are developing their own hydropower sectors, often with investment and technical assistance from Chinese firms, both for domestic use and for export.

Similarly, Chinese power companies such as Sinohydro and Huaneng are eyeing untapped hydropower resources in Bhutan, Myanmar and Laos, all while massive hydro resources in northeastern India continue to be delayed, primarily due to the technical challenges of exporting from the area to western India via the “bottleneck” between Bangladesh, Bhutan, and Nepal. The richness in hydropower resources in the region spanning northeastern India to southwestern China is perhaps matched only by the complexity of regional geopolitics, dam ownership models, and electricity export tariffs.

If oversupply is already apparent, and if much of China’s new renewable generation is either curtailed or not connected to the grid, then why continue large-scale hydropower development in Yunnan and neighbouring regions? Just as planners are keen to export Yunnan’s hydropower to Guangdong, China as a whole is keen to export its planning expertise. Plans for region-wide power grids linking ASEAN states will facilitate transmission of electricity across national borders, even if the financial arrangements for such transfers prove more complicated. And because hydropower output can be changed almost instantaneously it can effectively balance the increasing share of intermittent renewable electricity sources on grids.

Hydropower as an alternative to coal

Another question is whether under-utilised hydropower could displace more polluting generation such as coal. This is more complicated. All power generation sources have a capacity factor, which is how much electricity is generated in a given time period divided by the maximum possible output for the same time period.

Maintenance, curtailment, fluctuations in demand, and unforeseen shutdowns mean that the average output of a plant is always less than its maximum possible. But there are large differences between technologies. Where the capacity factors for thermal plants might be as high as 90%, for hydropower it hovers around 40% to 50% because rivers and dams have competing uses (hydropower, flood control, ecosystem needs, transportation, etc.).

As a result, thermal power plants are often better at meeting the base load that is always present on a grid with little fluctuation. Hydropower can be ramped up and down to follow fluctuations that exceed base load and so could play a key role in the development of a national smart grid based on renewables.

As leaders in China and elsewhere look to reduce dependence on polluting energy sources, hydropower’s role will only grow in importance. Yunnan’s high levels of hydropower development, then, can either be seen as over-exploitation of a resource in sensitive areas, or as one of many steps in moving toward a less carbon-intensive energy future.

A crucial question now and in coming years will be to what extent governments and power companies will take seriously the need to mitigate the negative socioeconomic, biophysical, and geopolitical impacts than can arise from poorly implemented projects. Small or large, all dams displace people, disrupt ecosystems, limit sediment transport, contribute to downstream erosion, alter flow regimes, and create a host of other problems. Overbuilding and under-utilising dams in sensitive areas of acute cultural and biological diversity will only worsen those impacts.

Q&A: Why India and China are driving the 'global green shift'