Myanmar is one of the world’s most climate-vulnerable countries. It is highly exposed to extreme weather such as cyclones, flooding and droughts, as well as having weak capacity for adaptation.

This article echoes the main findings of the Stockholm International Peace Research Institute’s Environment of Peace Report, published in May 2022, which Kyungmee Kim co-authored. The report illustrates the intricate relationship between the environment and peace as not only an intertwined problem but also a connected solution.

In Myanmar, the impacts of more intense and frequent extreme weather could be aggravated by the political and security situation. Since the military junta seized power last year, Myanmar has experienced unprecedented levels of violence, even for a country with a long history of civil war dating back to 1947.

More than 11,000 people in Myanmar are estimated to have died in 2021 due to political violence. In the wake of crackdowns by the military and police, dozens of local militia groups have formed. Since May 2021, clashes between local militia groups – collectively known as the People’s Defence Force – and security forces have spread across the country, even affecting the previously peaceful Sagaing and Magway regions.

Many fear that this high-intensity violence could last for years, as both sides appear unwilling to negotiate.

The 1 February coup and the subsequent escalation of violence between state security forces and the anti-junta coalition have already undone Myanmar’s recent development progress in climate adaptation. Climate-related security threats are now likely to deepen if the “violent stalemate” between the military junta and its opponents persists.

Based on Myanmar’s past, there is also a risk that this upsurge in violence could cause humanitarian aid to become politicised, with organisations refused access to affected populations in the wake of major natural disasters.

Two scenarios illustrate how the impacts of climate change could interact with Myanmar’s security situation in dangerous ways.

The first scenario is a “rapid-onset event”: a major cyclone in a conflict zone such as Rakhine State on the western coast. As the climate changes, cyclones are becoming increasingly common in Myanmar. Before 2000, cyclones hit Myanmar’s coast once every three years on average. Since then, it has happened annually.

The scale of the human impact is dictated as much by contextual factors as by the hazard itself, especially preparedness. In 2008, Cyclone Nargis killed approximately 140,000 people and displaced 2.2 million. That disaster provided Myanmar with valuable lessons on how to improve disaster preparedness, relief and reconstruction. 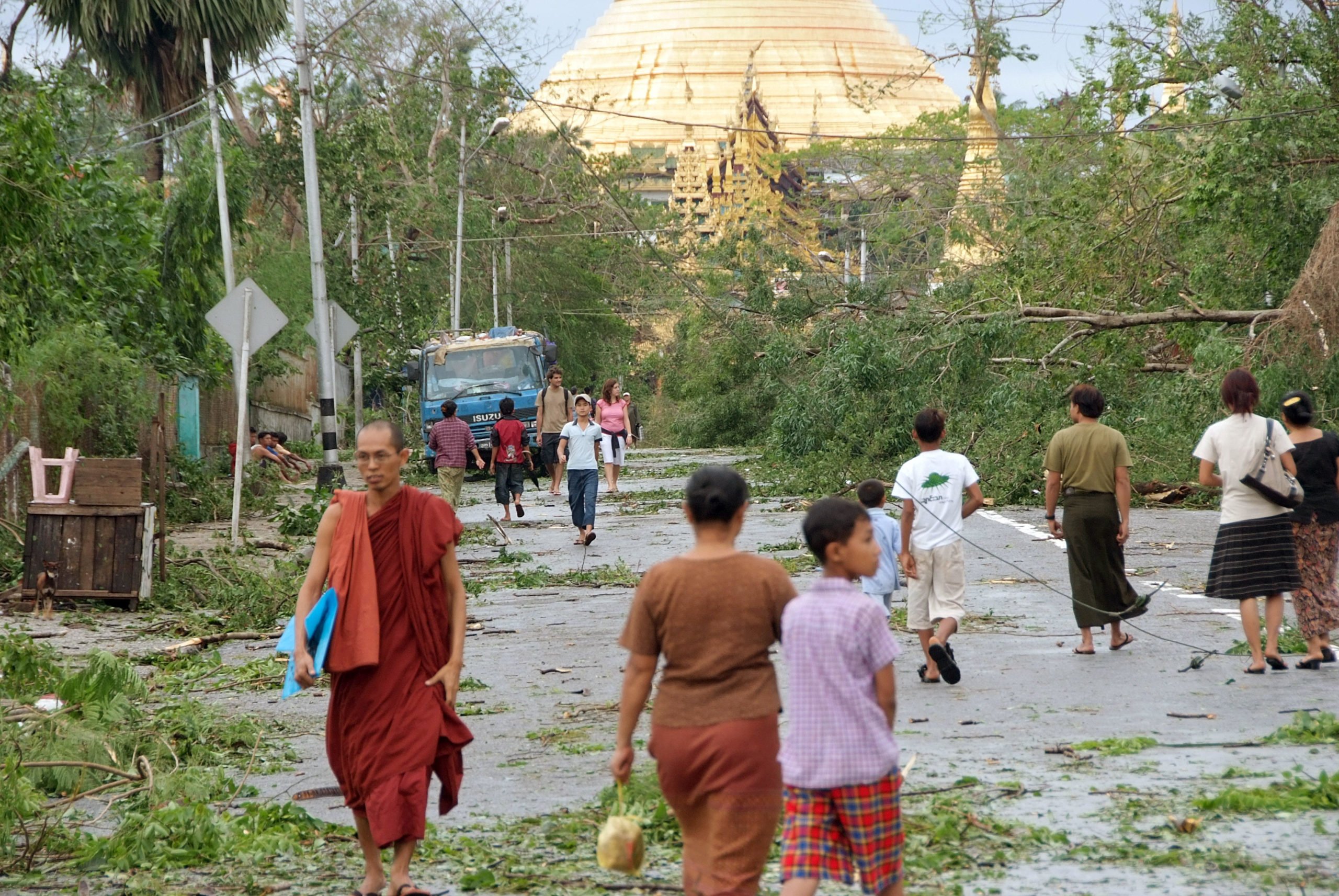 People walk along a street in Yangon, Myanmar, littered with toppled trees and other debris, after Cyclone Nargis in 2008 (Image: Alamy)

Unfortunately, much of the progress made since then has been reversed by the 2021 coup, especially because of its devastating effects on civil society. Today, if a cyclone were to reach Rakhine State, it would not only create a humanitarian disaster but would also interact with local political instability and conflict, potentially with national and even regional spillover effects.

Rakhine State has been the scene of genocide against the Rohingya community and is an active conflict zone between the Arakan Army (a rebel group supported by much of the ethnic Rakhine population) and the Myanmar military. A major cyclone would entail several risks for ethnic Rakhine and stateless Rohingya populations. In the wake of the chaos, the Arakan Army could be expected to seize an opportunity to further strengthen its influence over the local population and territorial control, leading to more violence. The military regime would most likely deny access to the affected areas for humanitarian organisations, as it did during the Cyclone Nargis response.

Furthermore, road networks and communication infrastructure in Rakhine State are among the worst in the country, so the population would be effectively isolated until humanitarian aid could reach them.

Most of the 600,000 Rohingya still in Myanmar are in Rakhine State. Around 150,000 are displaced. They would likely experience even worse hardship in a major disaster. Many of their temporary camps are already overcrowded and have limited access to food, water and other essentials. If, after a cyclone, more Rohingya were to cross the border into Bangladesh, which already hosts over 1 million Rohingya refugees, this could further raise tensions and security issues in the neighbouring country.

The second scenario of a “slow-onset” natural hazard is all too real. Droughts are becoming more frequent and more intense in the dry zone of central Myanmar.

In Sagaing and Magway regions, most of the population depend on agriculture for their livelihoods. Due to ongoing conflict between “revolutionary” and government forces, there has been mass displacement and violence, disrupting food production.

Farmers in the dry zone have suffered the effects of droughts for years, and their problems were exacerbated by the economic downturn of the Covid-19 pandemic. Hunger and poverty are blamed on a combination of conflict and political instability in the wake of the coup, soaring fertiliser prices driven by the war in Ukraine, and sharply falling crop prices.

A more severe drought would result in a growing number of impoverished farmers in the dry zone. The political implications of this could be immense, considering reports from earlier this year of destitute farmers joining resistance groups.

Myanmar’s Ministry of Social Welfare, Relief, and Resettlement has a mandate to coordinate natural disaster responses with the General Administration Department. But it is hard to envision these institutions successfully leading or coordinating responses with local authorities if a major disaster were to hit the country.

Many experienced civil servants have refused to work under the junta, as part of a mass civil disobedience movement that developed following the coup. Government officials and local administrators who have continued to work or been coerced back to work have been ostracised and sometimes assassinated. Administrative buildings have been attacked and even destroyed by the People’s Defence Force.

Since successive Myanmar governments have had limited control of the situation on the ground, local communities have been left to adapt and prepare for climate impacts themselves. For example, over the years, farmers in central Myanmar have responded to the drying climate by changing crops and diversifying their income sources. Community mobilisation has been crucial in meeting the demands of populations in need. However, under the junta it is difficult for international actors to support such community-led efforts.

As the Stockholm International Peace Research Institute’s recent report Environment of Peace: Security in a New Era of Risk underlines, the links between environmental and security challenges are often deep and complex – going far beyond the common perception of climate change as a “threat multiplier”.

In the case of Myanmar, the coup has stalled progress on climate action. The country’s vibrant civil society – including environmental NGOs, which provided input into climate-adaptation policies during the democratic opening era – have nearly all gone into hiding or exile.

The Global Environmental Facility, one of the major international climate funds, halted its operations in Myanmar after the coup, fearing too much political and social risk to operate in the country. Climate finance per capita to extremely fragile countries like Myanmar (before the coup) is only 1/80 of that to non-fragile countries. This disparity needs to be addressed.

What should the international community do?

International actors operating in contexts like Myanmar face practical and ethical challenges. Climate adaptation funds and international environmental NGOs should not legitimise the military regime in return for access to the country. Without proper accountability and equality measures, cooperating with biased and authoritarian governments can lead to maladaptation and reinforce vulnerability.

Instead, perhaps the most promising approach is for international actors to consult with the few remaining civil society groups in the country and environmental NGOs operating in exile. These can act as interlocutors between willing international actors and vulnerable local populations in need of technical expertise and resources for adapting to changing climate and environmental conditions.

Such interventions will likely remain small-scale in the absence of any meaningful political change in Myanmar. The road back to democracy in Myanmar seems likely to be filled with uncertainty and peril. In the meantime, supporters of Myanmar’s peace and democracy must think of creative ways to empower and support the local population’s efforts to respond to the adverse impacts of climate change.

In the wake of coup, gold mining boom is ravaging Myanmar