Every day, the district hospital in Champawat needs at least 67,500 litres of water to function. But as water becomes increasingly scarce across the north Indian state of Uttarakhand, the hospital in the Kumaon Himalayas is routinely left without the quantity of water it needs to safely provide healthcare for the local community.

“In peak summers, our villagers are refused admission as there is no water at the hospitals,” said Bhuwan Singh, the head of Ruiyan, a small Himalayan village in Champawat district. He said that during the peak summer months, three or four people out of Ruiyan’s population of 330 adults are refused entry to hospital. There have been times, he said, when women from the village have given birth on their way home, after a lack of water meant the hospital was unable to admit them.

“Every year [during the summer], it gets really difficult to receive treatment at any of the nearby government health centres or even the district hospital,” he said.

Every major surgery at the hospital, including delivering a baby, requires at least 200-300 litres of water. Most of the year, the hospital has a continuous supply. But during the summer, the pipes run dry and it becomes dangerous to carry out important medical procedures.

Amount of water Champawat’s district hospital needs for each major surgery, including delivering a baby

Water is essential for the safe provision of medical care. It is needed for hand-washing, sterilising wards and surgical tools, cleaning equipment, and laundry. If healthcare centres cannot carry out such basic hygiene tasks, there is a risk to patient safety, with child and maternal health particularly at risk.

Harsh Singh Airy, chief medical officer at the district hospital in Champawat, confirmed to The Third Pole that water shortages lead to the postponement and cancellation of surgeries.

This year, like every year, Bhuwan Singh of Ruiyan village hopes for better rains. Singh is responsible for monitoring levels at the local water body and informing authorities when additional water needs to be brought in via tanks. With temperatures already soaring by March in Uttarakhand, Singh is getting nervous. As of 14 April, Ruiyan had not received piped water for two weeks.

In summer, when the mains water supply stops, women from the village collect water for the household from the local pond, while people across rural Uttarakhand walk to fetch water from springs if their local water source dries up. But hospitals depend on water tanks from the state water body during the summer.

Airy is worried that this year, an early heatwave will lead to a difficult season. He told The Third Pole he expected the hospital would have to rely on the district water department for a steady water supply by the third week of April. “We have dedicated administration staff who will continue to chase water department officials and ensure that the supply is uninterrupted. But then the water department can do only as much, most of the natural springs are drying,” he added.

More than 300,000 people in Champawat district rely on the hospital; its average daily footfall is 250-300 people. 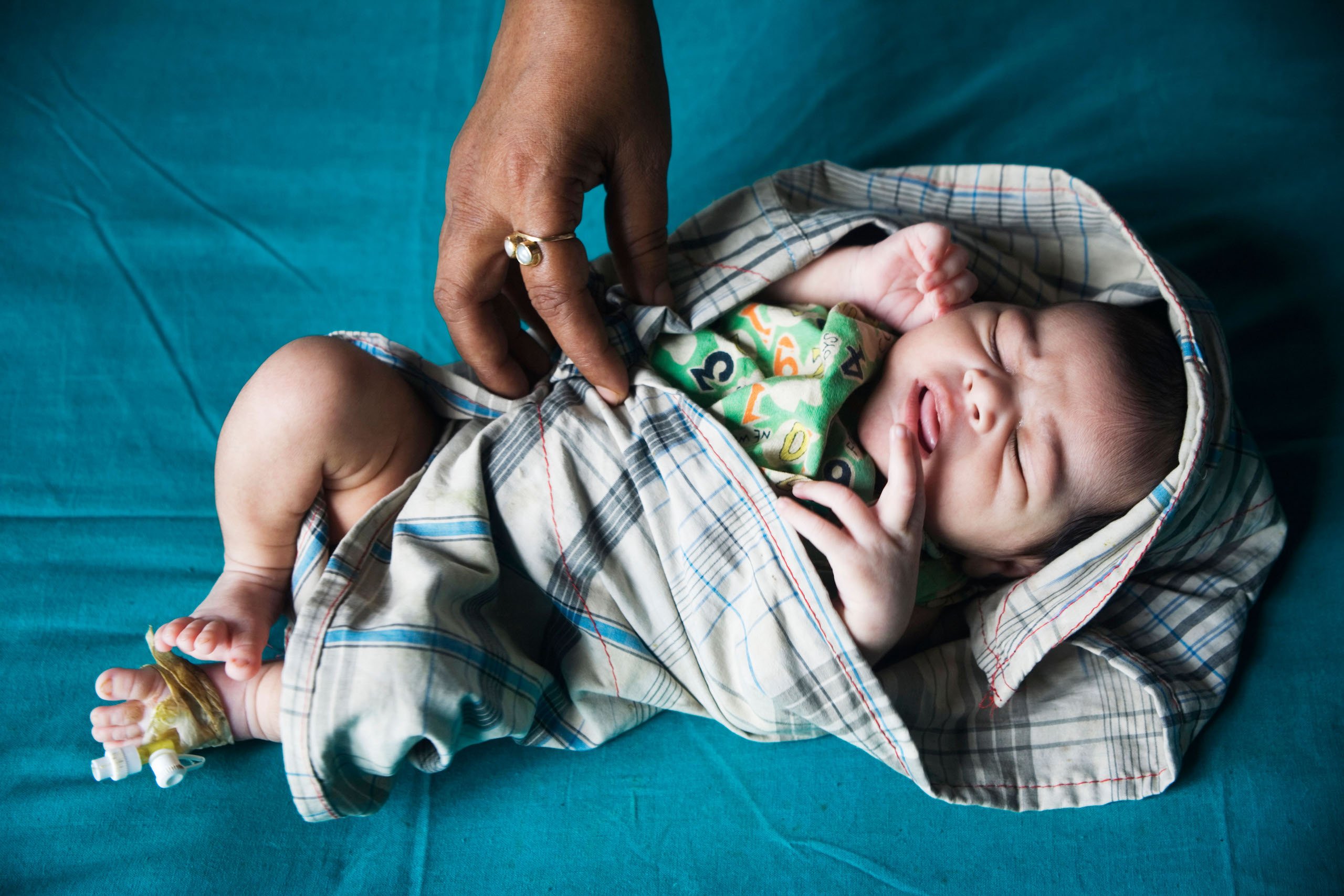 A newborn baby in a hospital in Kolkata, India. Major procedures, including delivering a baby, each require 200-300 litres of water; at times of acute water shortages the Champawat district hospital in Uttarakhand has been unable to admit women in labour. (Image: Liba Taylor / Alamy)

Airy has already discussed how to handle the situation this year with the district magistrate. He expects to draw on a new water source in the Koirala valley, about 30 km from the district hospital. Trial use was due to start from 20 April (although engineers were unable to confirm with The Third Pole whether the project would start on time). It will not pipe water directly to the hospital, but represents another source of water for the driest months.

Parmanand Punetha, an engineer at the Uttarakhand water department, said: “Water reservoirs are drying each year, and it gets very difficult to maintain a continuous supply to the three major hospitals in Champawat, Lohaghat and Paati on a regular basis. While we do our best, some things are not in our control; sometimes there are major delays caused by landslides or construction and the water fails to reach the hospitals.”

Every day, a tanker carrying 3,500 litres of water travels between the three hospitals, refilling with water after each stop. From the week beginning 18 April, Punetha will be monitoring the situation closely, ensuring that no one in his department takes leave for the next three months until the rain starts in July.

The Bureau of Indian Standards, the authority that sets standards for all products in the country, stipulates that hospitals with more than 100 beds should have a round-the-clock piped supply of up to 450 litres of water per bed per day. This excludes water required for air conditioning and firefighting.

Average amount of water Champawat district hospital receives per bed per day on most days during the driest part of the year. Government guidelines stipulate it should have 450 litres per bed per day.

Champawat district hospital has 150 beds, and needs at least three tankers of water (10,500 litres) to function, Airy said. This means the average allocation is less than 50 litres per bed per day.

Yet Airy told The Third Pole that during the summer, the hospital receives only half the required quantity of water. On most days in the driest period it gets only two tankers (7,000 litres), and sometimes just one.

“When we order four tanks, we only get two and we are the main hospital in this district so I can imagine that the primary [or community] health centres would face even tougher situations.” Airy said the situation becomes “dire” because without a consistent water supply, the hospital cannot keep to its schedule of planned surgeries.

When we order four tanks, we only get two. We are the main hospital in this district.

Rakesh Parashar, a health policy expert and systems lead at development consultancy Oxford Policy Management, said: “In a private setup, an in-patient admission will average out to 200-300 litres per day per bed. But most government hospitals manage [with] 100-150 litres/day/bed due to sometimes low maintenance and more patients per square metre. But even then the operation theatre and delivery wards cannot cut down on water, irrespective of the facility.”

Parashar said that some hospitals use alcohol sanitisers instead of water to minimise need for frequent hand-washing, but that this has a minimal impact. He said that since there is no substitute for water, it is crucial that hospitals have water harvesting and conservation systems in place.

The district water body of the state water department is aware of the problem the hospital faces and is already gearing up by signing contracts with tanker-rental providers to prepare for the season, Punetha said.

For at least 20 years, Uttarakhand has experienced water stress. The problem has worsened in recent years. Between 2009 and 2018, studies show the water level fell in about 70% of wells in Dehradun, Udham Singh Nagar, Haridwar, Nainital and Champawat districts. Champawat has experienced the sharpest long-term decline in groundwater levels.

Badrish Singh Mehra, founder and head of Uttarakhand-based rural development organisation CHIRAG, told The Third Pole that out of 300 natural springs in Almora district, which borders Champawat, only 36 are currently functional.

The Third Pole asked the state health department about the impact of water shortages on healthcare provision, but was told the data was not available.

Tripti Bahuguna, director-general of State Health Services for Uttarakhand, said that healthcare provision is most affected in the Kumaon region (which encompasses Champawat district) and Pauri Garhwal district. “We ensure regular communication with the water departments in these regions,” she added.

“Water shortages occur in the Himalayas for reasons beyond our control,” such as landslides, said Bahuguna. “But we ensure that the healthcare services go on without interruption. While I know of water shortages in sub-centres where treatments get interrupted, similar issues at the district level are however minimal.”

She added that “most hospitals buy water”.

Why is water so scarce in Uttarakhand?

The Uttarakhand government’s action plan on climate change details how the state is already reeling from the impacts of climate change. These include receding glaciers and rising snowlines, erratic rainfall, and the drying up of perennial streams. Mehra, from CHIRAG, said that rainfall in the region has fallen by 12-17% in the last century.

On top of these changes, incessant construction across the state has disrupted aquifers and the processes that naturally store and release water, further exacerbating water shortages.

“Deforestation, construction and forest fires together leave the [ground] surface hard which leads to zero percolation and no recharge of resources. The result of this is that most of the major springs have now dried up, or there has been construction on them leading to increased travel time to fetch water for the village women, thus affecting their health even more,” said Mehra.

How will Pakistan stay cool while keeping emissions in check?

‘Pandemic a chance to correct course on climate and health’