As the problem of urban flooding grows across India, Guwahati – an important political and economic hub in the country’s northeast – is piloting a new flood warning system.

In August, the Energy and Resources Institute (TERI) in New Delhi, along with the National Disaster Management Authority (NDMA), launched a fully automated web-based flood warning system for Guwahati. Every year without fail, flash floods ravage the capital city of the Indian state of Assam. It has been a perpetual occurrence for decades, with no solution in sight.

Currently at an experimental phase, the Flood Early Warning System (FEWS) has been designed to alert local authorities about flash floods, heavy rainfall and waterlogging, which will help them take measures to prevent untoward incidents and prepare for flood conditions. If successful, the tool will be replicated by other cities across India.

How will the Flood Early Warning System work?

FEWS has been developed to deal exclusively with urban drainage, river and overland flow combined. It uses advanced hydrological models to provide warnings with a lead time of 72 hours. It uses the India Meteorological Department’s (IMD) hourly forecast data of precipitation to simulate a hydrodynamic model to predict the water level, and generate spatial flood maps. 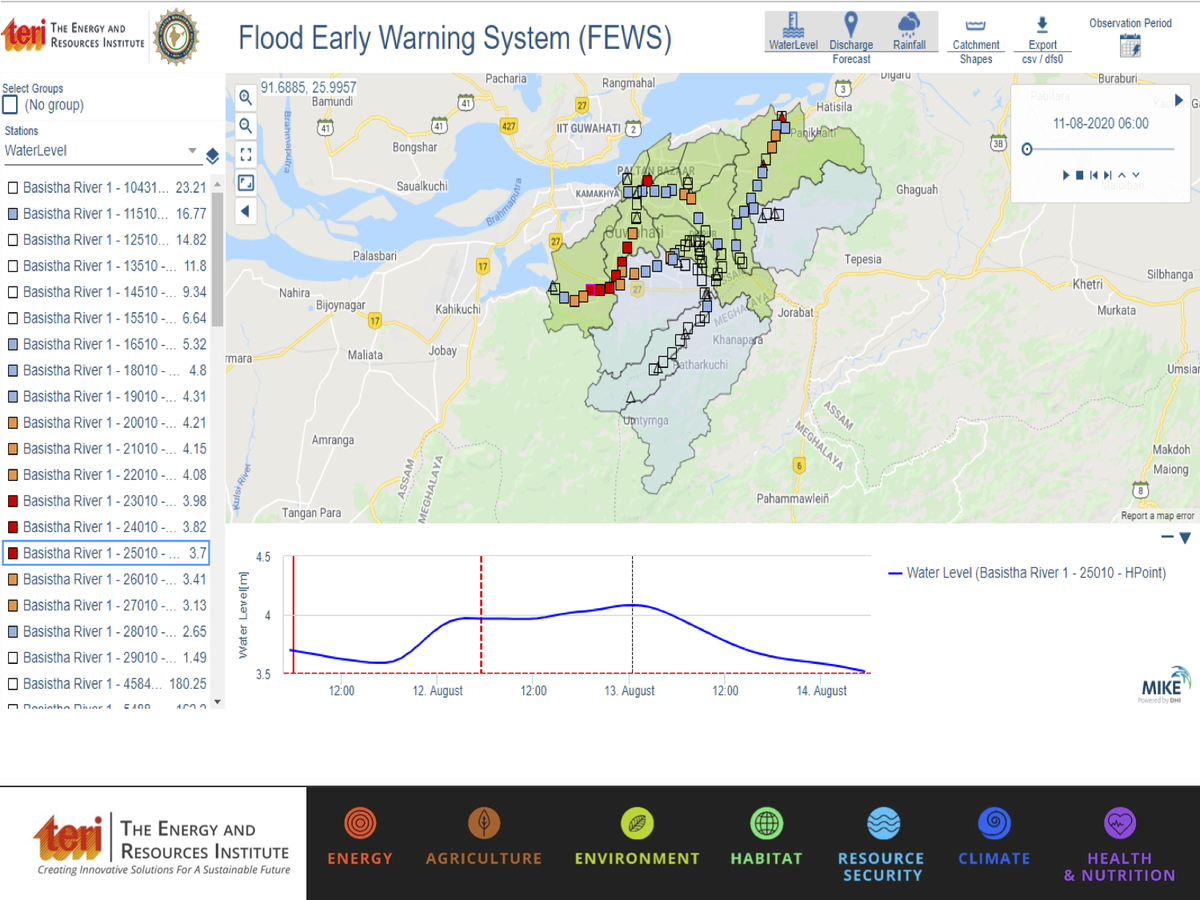 For this study, 11 sub-catchments were created, based on the 11 streams of Guwahati’s river system, vis-à-vis tributaries of the Brahmaputra. Based on the forecast precipitation, the model calculates the runoff volume and hydrodynamics of the flow from these river channels and predicts the water level. Once the water level crosses its threshold, the system sends out alerts through text and email to the concerned authorities. The urban stormwater drainage setup of the system has been linked with the river modelling system to provide the water level in the stormwater drains and on the road networks.

“The system is developed with an inbuilt urban drainage to predict flood at street-level accuracy. The flood level and hotspot areas can be visualised over Google Maps which will help in identifying flood-affected areas, disaster preparedness and management of urban flooding-related issues such as traffic disruption, providing relief and recovery and managing stormwater,” said Prasoon Singh, the project lead of FEWS, and an associate fellow of the Earth Science and Climate Change division at TERI. 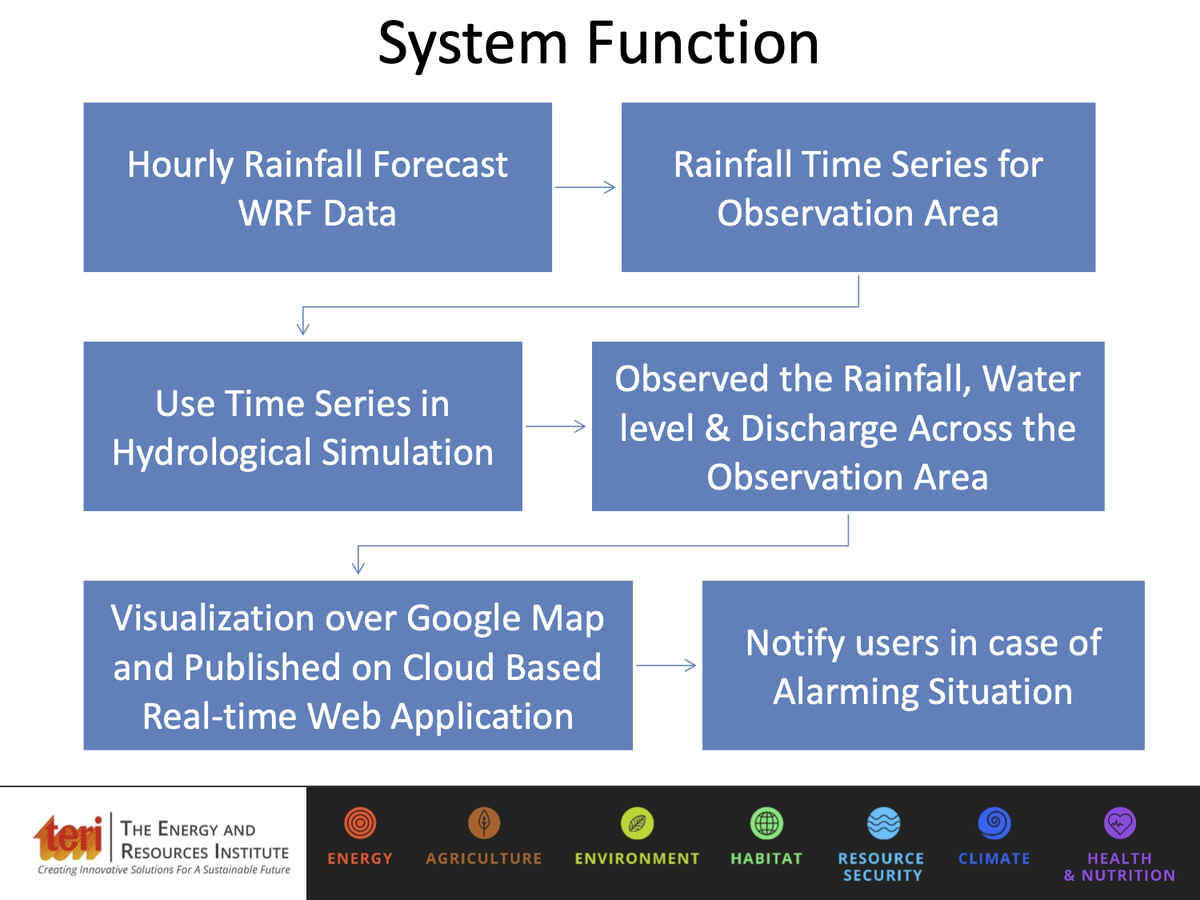 “Guwahati was selected for the project after consultation with the state and the NDMA since it is one of the important economic and commercial centres prone to floods in the northeast, and experiences flooding every year,” said Singh.

Inhabitants of this city, situated beside the Brahmaputra river, fall victim to these flash floods, with people stranded in their homes, accidents, loss of life and property, and damage to infrastructure. A bout of heavy rainfall, particularly during the rainy season, is enough to clog the natural and artificial drains, leading to flooding of areas of the city and bringing life to a screeching halt.

To develop such a warning system, one needs to understand the urban hydrology, historical evidence of flood issues, geography and topography of the area, land use/land cover of the city, developmental activities and urban growth pattern, demography and urban water management infrastructure of the location in focus. 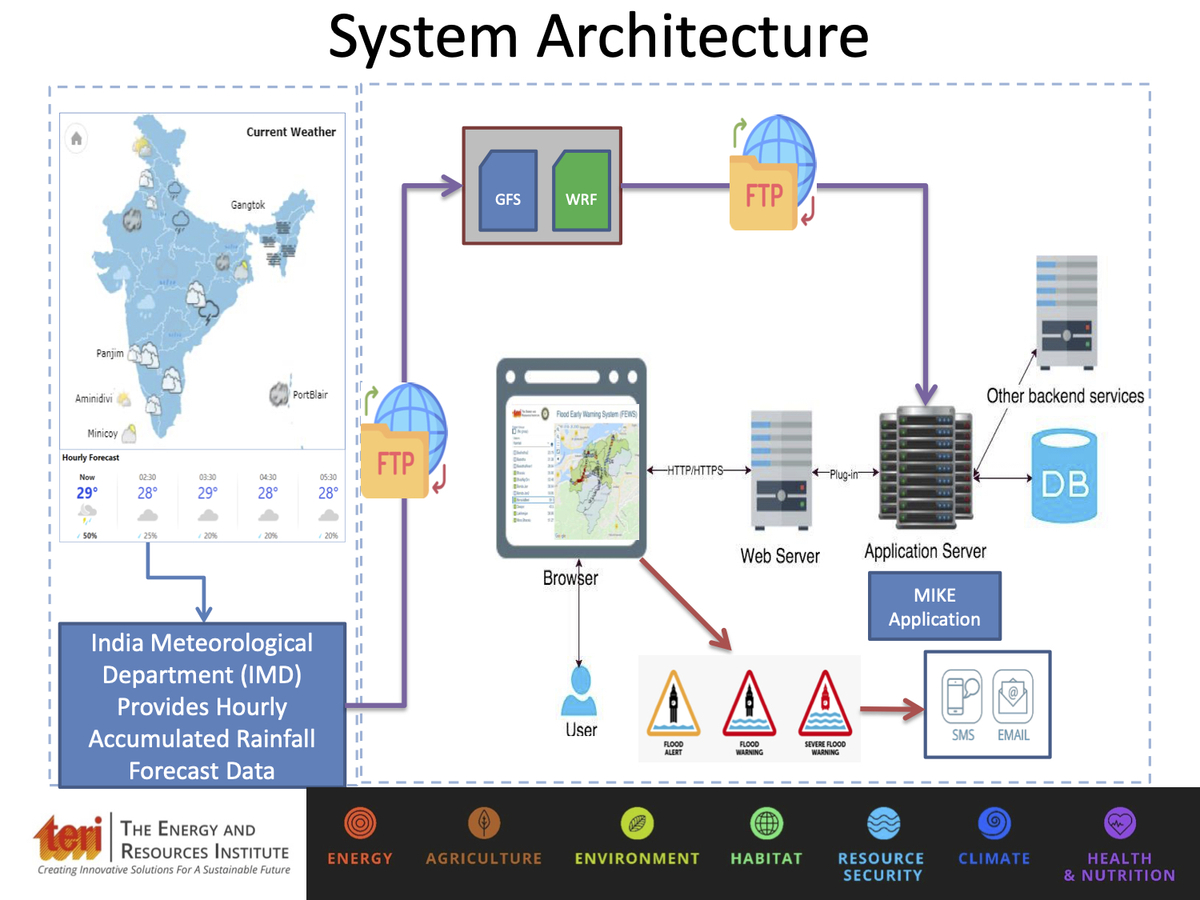 “It was evident that the city doesn’t get flooded from the main channel of the Brahmaputra, but from its tributaries. These assessments provide a background to design a system which can model a complex and dynamic nature of interactions altogether,” Singh said, adding that TERI has also signed a memorandum of understanding with the IMD to be a partner institute, as it is the only authorised agency to provide forecasts.

“The forecast is the most important parameter in this study as the results depend on the accuracy of the forecast. We consulted the IMD as it was crucial to select the best suitable forecast model which provides good spatio-temporal coverage, and we selected the Weather Research and Forecasting (WRF) for this experiment,” said Singh.

Biren Baishya, GIS expert at ASDMA said, “We suggested that they put in place the project for at least two seasons on a pilot basis, and provide us with alerts, so that we can physically verify them. Only then we can assess whether the model is producing accurate results. The biggest challenge will be the Digital Elevation Model (DEM) – the digital representation of the land surface elevation – as the accuracy of the system will depend on it. If FEWS is successful, then a mobile application can be developed in the future which can be accessed by the public.”

TERI is also developing a similar warning system, with the support from Royal Norwegian Embassy, for the city of Jorhat in Upper Assam. The system is expected to go online by the end of September.

Deforestation and destruction of the hills surrounding Guwahati is a major contributor to urban floods. Talking about the hurdles faced by the municipality in containing the flash floods, Devajyoti Hazarika, former GMC commissioner (who has recently been appointed as the secretary to the Government of Assam, Public Enterprises Department, and as state enquiry officer), said, “Illegal encroachments in these hills are rampant. The hills are cut down and rainwater flows downhill to the urban settlement, causing waterlogging. The rainwater coming from the surrounding hills causes major clogging of the drains, heavy siltation and water logging, resulting in artificial floods.”

Plastic pollution is another pressing issue in the management of urban floods. Despite a ban on plastic, the continuous use and improper disposal of plastic products by citizens has overwhelmed the municipality authorities.

“Citizens need to be conscious about the use and disposal of plastic bottles, tetra packs, and all other single-use plastics. Our city drains get choked with plastic and it leads to floods. We need the cooperation of the citizens in helping us curb the plastic problem. It has to be a two-way process. It is impossible for us to do this alone,” Hazarika added.

Flood warning system to be replicated in other cities

FEWS has been designed in a way that it can be replicated to predict urban floods in any part of the country. “The main challenge of developing such a system is the availability of required datasets. Most of the river tributaries of the Brahmaputra in Guwahati do not have a gauge for discharge and level measurement. Similar challenges lie ahead in any location of future development, specifically for urban areas,” said Singh.

Earlier in June, a similar system was launched in Mumbai. According to The Indian Express, Mumbai is the second city in the country after Chennai to get this system, and similar systems are being developed for Bengaluru and Kolkata.

Kasturi Das is an independent journalist based in Assam.

The ascent of Lalana: triumph and tragedy

Why are landslides so deadly in Nepal?