When plans are drawn up to capture carbon dioxide from the air by increasing India’s forest cover, the native bamboo that is found in profusion across the country, is often ignored. But now, a body of evidence is emerging that shows bamboo captures carbon quickly, while it also rapidly rejuvenates degraded lands, restoring soil fertility.

India had told the UN Framework Convention on Climate Change that it would create an additional carbon sink of 2.5-3 GtCO2e (gigatonnes of carbon dioxide equivalent) through afforestation by 2030, as a key part of the targets it set for itself under the 2015 Paris Agreement. But India’s 2018 report to the convention secretariat showed that growing forests is the one area where the country is lagging behind its target.

With most of India’s designated forest lands degraded, planting bamboo can be the first stage in long-term agroforestry and agricultural redevelopment, scientists say. The latest report from the International Bamboo and Rattan Organisation (INBAR), an intergovernmental organisation of 43 countries, emphasises the point.

The speed with which a plant grows has a part in determining how much carbon dioxide it can absorb in a given time. In a paper submitted at the National Workshop on Global Warming and its Applications for Kerala, researchers of Thrissur-based College of Forestry say, “Bamboo potentially acts as a valuable sink for carbon storage, and on an average, one hectare of bamboo absorbs about 17 tonnes of carbon per year.”

The carbon sequestration properties of bamboo have been studied in countries where it naturally forms wild forests, such as Mexico and China. For instance, a bamboo species, Guadua Angustifolia, found in Venezuela, Ecuador and Colombia, has shown to grow up to 25 metres in height and 22 cm in girth, with each plant weighing up to 100 kg. 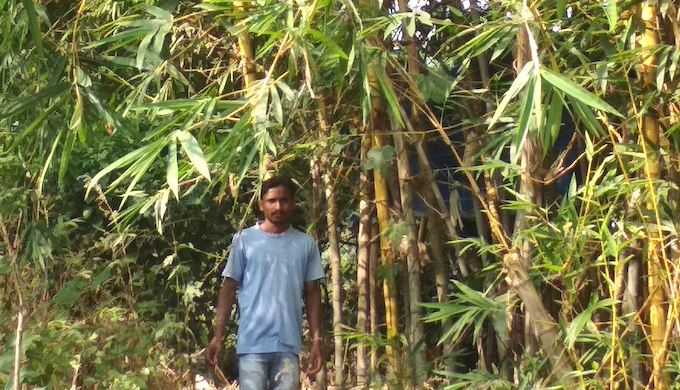 A farmer in front of a bamboo groove. (Image: Hiren Kumar Bose)

Bamboo can grow at the rate of up to 1.2 metres a day, making it one of the fastest growing plants. Due to this, it takes only three years to establish mature groves. As a result, bamboos are effective carbon dioxide absorbers, not only above ground carbon (AGC), but also below-ground carbon (BGC) in roots, and rhizomes. To a lesser extent, it absorbs soil organic carbon (SOC) too. Importantly, growing out of a tangle of underground stems, bamboo can help reforest landscapes denuded by development or natural disasters, binding topsoil to prevent erosion.

In India, bamboo has been reclassified as a grass rather than a tree with an amendment to the Indian Forest Act. Scientists say now is the time for planners to push growing bamboo in degraded forests and wasteland. While moving the amendment, Environment Minister Harsh Vardhan had said in November 2017 that this would create a viable option for cultivation in 12.6 million hectares of cultivable wasteland, ushering in the “twin objectives” of increasing the income of farmers and the country’s green cover.

Efforts to study the role that plants play in climate change mitigation are increasing. Most researchers focus on the promise of large, leafy trees. The bigger the plant, the more carbon dioxide it absorbs. However, increasing evidence points to bamboo being a surprising grassy climate change warrior. Grown as a low-cost sustainable, household-level commercial plantation, it can be introduced, adopted and scaled-up to secure water catchments and protect erodible soils. 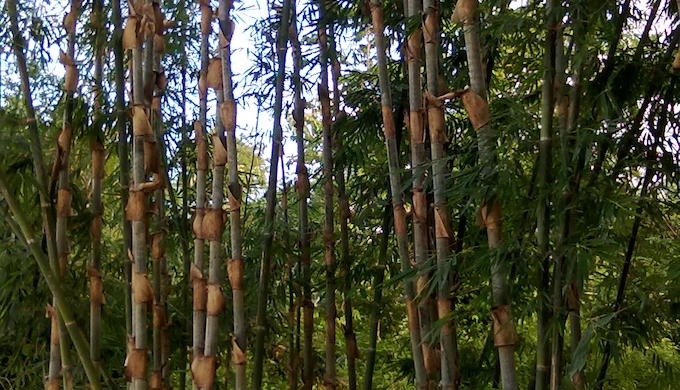 It also has the potential to generate employment and high income, while at the same time significantly reducing greenhouse gas emissions. There is an urgent need to devise ways to absorb excess greenhouse gases from the atmosphere.

India is the fourth largest emitter of greenhouse gases after China, the US, and the European Union. India’s emissions increased by an alarming 4.7% in 2016 compared with the previous year. However, India’s emissions per head are among the lowest in the world.

According to Arun Jyoti Nath, assistant professor of ecology and environmental science at Assam University, the evolving REDD+ programme with its positive financial incentives is likely to assist India in reducing its deforestation rates. “Incorporating bamboo in REDD+ can be seen as an offset scheme within carbon markets and carbon farming,” he says. “Importantly, carbon trading is the important strategy that will facilitate earning of carbon credits.”

Presently, bamboo occupies an area of 36 million hectares worldwide, which is equivalent to 3.2% of the total forest area in the world. India, a major bamboo producing country, grows bamboo on nearly 11.4 million hectares. Of the 125 varieties grown in India, 18 varieties have the potential for afforestation, but the need is to zero in on varieties keeping in mind different agro-climatic zones in the country.

“Though the country’s bamboo cover is mostly concentrated in the northeastern states, all states hold promise for bamboo cultivation, specifically the Western Ghats region, a significant source of moisture for monsoon and which runs along the west coast of peninsular India,” says K.C. Koshy, formerly head of Plant Genetic Resources Division of the Kerala-based Jawaharlal Nehru Tropical Botanic Garden & Research Institute. 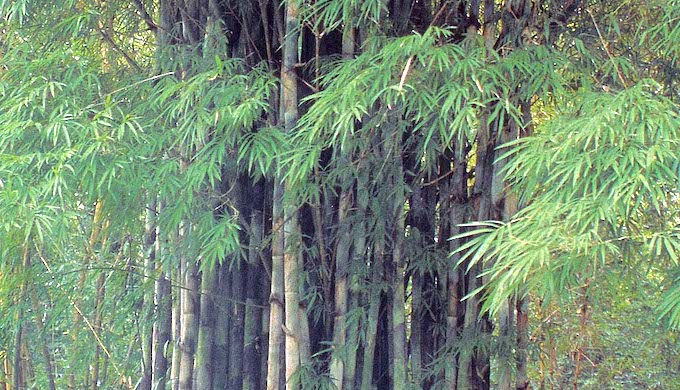 Thyrsostachys oliveri, a bamboo variety with short rhizomes that is found in in Karnataka. (Image: Hiren Kumar Bose)

China has shown the way by increasing its bamboo cover for industrial purposes, unlike India, which has failed to do much despite its large-scale availability. Even the centrally sponsored scheme of National Bamboo Mission (NBM), under the National Mission for Sustainable Agriculture, which has an allocation of INR 129 billion (USD 1.81 billion) in the 2018-19 Union Budget, has no allocation for R&D, despite experts seeking R&D money for decades.

According to proceedings of the 7th Chinese National Forestry Inventory (State Forestry Administration of People’s Republic of China 2010), the area of bamboo resources in China grew from 4.84 million hectares in 2004 to 5.38 million in 2008, a growth of 11.18% in five years, with an average annual growth of 2.24%.

A hands-on approach needs to be taken to bring more lands, be it wastelands, riverbanks and basins, under bamboo cover, stresses Hemant Bedekar, a botanist by education and horticulturist by profession, and executive director of Bamboo Society of India (Maharashtra Chapter).

“The Forest Department officials who run the NBM recommend the tissue culture varieties without the support of studies about their survival and performance in a specific agro-climate, which may result in lower yields, invite new diseases and pests and ultimately result in less output,” he says. “The country’s research institutes need to step in to conduct multi-location trials on the performance of various species in all or specific agro-climatic zones and based on the results promote them.”

However, it is essential to keep in mind that afforestation has to have a proper mix of bamboo and other tree varieties, as elaborated by María Genoveva Gatti, biologist at the Institute of Subtropical Biology and one of the authors of a new study reported in the journal Forest Ecology and Management, which sheds light on the mechanisms behind the loss in carbon fixation of subtropical forests.

“The soil contains more carbon than the atmosphere and the vegetation. This is why we wanted to look at the effect of tree replacement on soil carbon storage,” she says. “The replacement of trees by bamboos produces a cascade effect from the vegetation to the soil, implying that a disturbed forest is not delivering the same ecological service as a non-degraded forest.”

As reforestation, afforestation and REDD+ are eligible for carbon trading, bamboo afforestation activities can be brought under CSR (Corporate Social Responsibility), making it a people-centric activity rather than the State’s responsibility to meet the 12-year deadline to restrain the rise in planetary temperatures.

If adequate mechanisms are in place, there are possibilities for India too to incorporate bamboo CSR and earn credit, says Nath. He goes on to add that the CDM (Clean Development Mechanism) Executive Board, which supervises the Kyoto Protocol’s clean development mechanism under the COP (Conference of Parties) in its 39th meeting decided that “palm (trees) and bamboos are equivalent to trees in the context of afforestation and reforestation.”

Following this, the Food and Trees for Africa’s (FTFA) Bamboo for Africa programme has been certified under the verified carbon standard and is the first accreditation for bamboo in the world (FTFA 2012).

Khai: A gift from the Ou River

An Indian as a young Arctic leader