As the Earth warms, frozen water in its many forms is affected. In mountainous regions like the Hindu Kush Himalayas, one of the most visible signs of climate change is the impact on glaciers.

In the Hindu Kush Himalayan region – which includes the mountain ranges of the Pamirs, the Tien Shan and the Tibetan Plateau – the cryosphere is a vital source of freshwater. Approximately 2 billion people rely on the rivers that flow from these mountain ranges, with more than 240 million people living in the mountain areas. As well as providing a water supply for humans, livestock and wildlife in the region, freshwater originating in the cryosphere is essential for agriculture, hydropower, inland navigation, and spiritual and cultural uses.

What is the cryosphere?

The term cryosphere refers to the areas of the planet where most of the water is in a frozen form: that is, the polar regions and high mountains. In the Hindu Kush Himalayas, the world’s highest mountain range, frozen water exists in the form of glaciers, ice caps, snow, permafrost, and river and lake ice.

While water flow is determined by a host of factors – including rainfall, groundwater and springs – the presence of the cryosphere has led to stable water flows across the Hindu Kush Himalayan region. But as the frozen water in glaciers, snow and permafrost is now melting at unprecedented rates, these flows are changing.

The Himalayan glaciers are receding

Glacier loss is difficult to project over the whole of the Hindu Kush Himalayas. Rates of glacial melt depend on a number of variables, including elevation and elevation-dependent temperature, precipitation and debris cover, among others.

On the whole, glaciers across the Hindu Kush Himalayas have lost mass since the 1970s. Unfortunately, given political sensitivities in the region, much satellite photography from before 2000 remains classified, and high-altitude field-based surveys are difficult. Nevertheless, the data that has emerged in recent years allows scientists to make general predictions for the region. 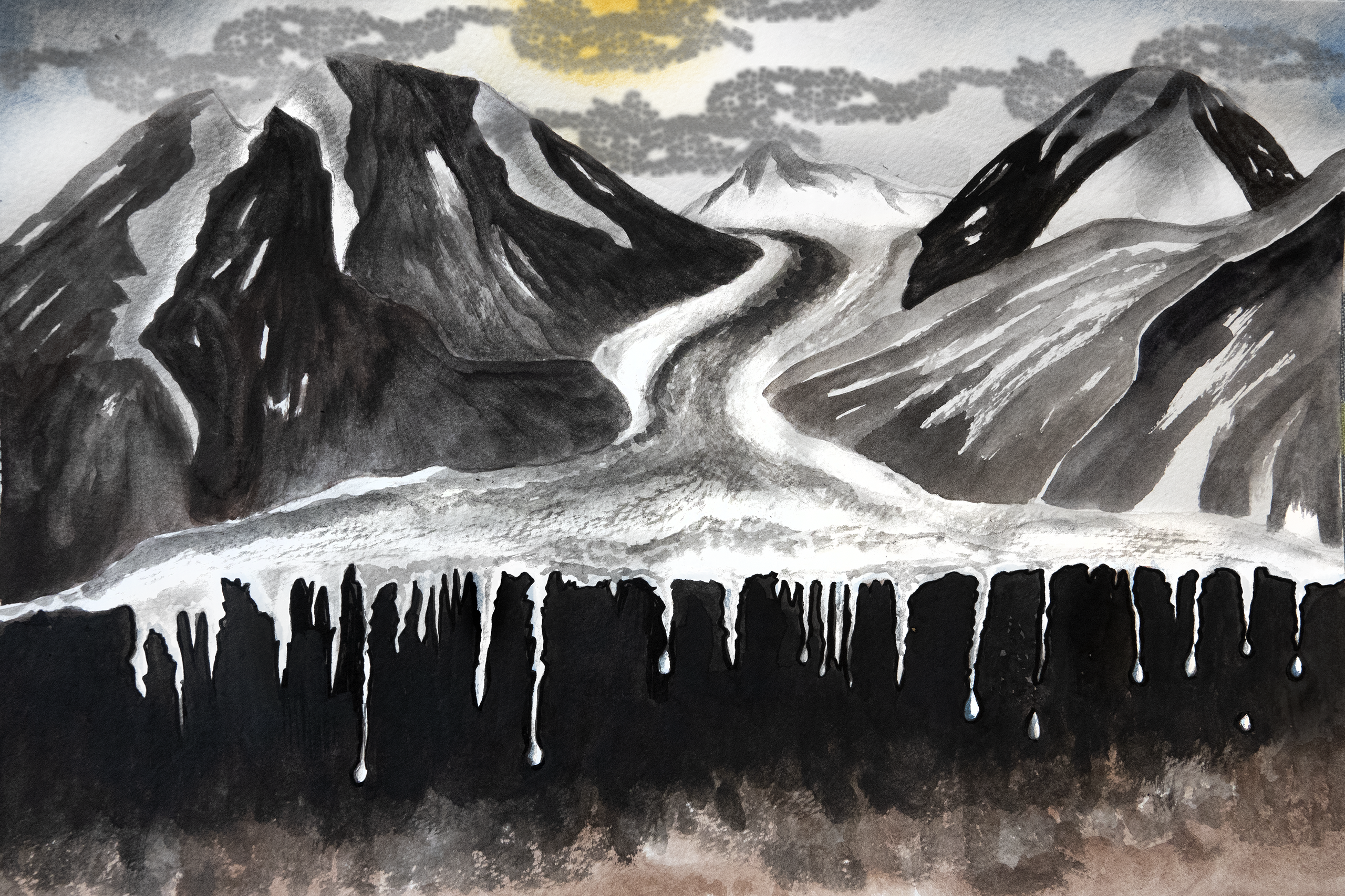 In the near term, by 2030, glaciers in the Hindu Kush Himalayan region are expected to lose between 10-30% of their mass. By 2050, this figure is expected to increase to 25-35%. In the long term, by 2080-2100, glacial mass loss is predicted to reach 35% in the Karakoram, 45% in the Pamir mountains, and as high as 60-95% in the eastern Himalayas if world governments fail to implement aggressive emissions-reduction policies. All of these figures are based on a moderate emissions scenario (RCP 4.5). Given different emissions scenarios and modelling methods, there is significant variation between longer-term projections.

There are thousands of glaciers in the Hindu Kush Himalayan region, and there will be anomalies in terms of glacial melt. The glaciers in the eastern part of the region are at a lower elevation on the whole than those in the western part, leaving them relatively more vulnerable to melting. In the Karakoram region, which hosts a number of high-altitude glaciers, there have even been some glacial surges, leading to discussion of a “Karakoram Anomaly”.

The Himalayan region is warming faster than the global average

As ice cover melts, it exposes larger areas to solar radiation, thus allowing greater absorption of heat. Since ice reflects light, as the ground is increasingly exposed this leads to greater heating. The fact that many glaciers in the HKH region are covered with debris means this effect is less pronounced than in areas like the Arctic. Greater detail on exactly how and why this is happening can be found in the third chapter of the HKH Assessment conducted by the International Centre for Integrated Mountain Development (ICIMOD).

Unfortunately, the glaciers of the Hindu Kush Himalayas are facing another problem: black carbon. This is essentially soot from fires in the surrounding lowlands which rises in the air and settles on glaciers. Because of its dark colour, black carbon absorbs solar radiation faster. Black carbon and other short-lived climate pollutants – such as dust and aerosols – are produced by a range of human activities, including biomass burning, brick factories, and coal-based electricity plants. Not only do they darken the glaciers, these pollutants can also lead to warming of the air mass, leading to higher temperatures around the cryosphere and melting of its ice.

What happens when glaciers melt rapidly?

It is difficult to speculate how exactly the melting of the third pole’s glaciers will impact water flow and availability across the regions that depend on Himalayan rivers. This is because multiple factors influence water flow, including the stability of monsoons that are responsible for precipitation – both rain and snow – in the region.

One effect that can be predicted is an increase in glacial lake outburst floods (GLOFs). 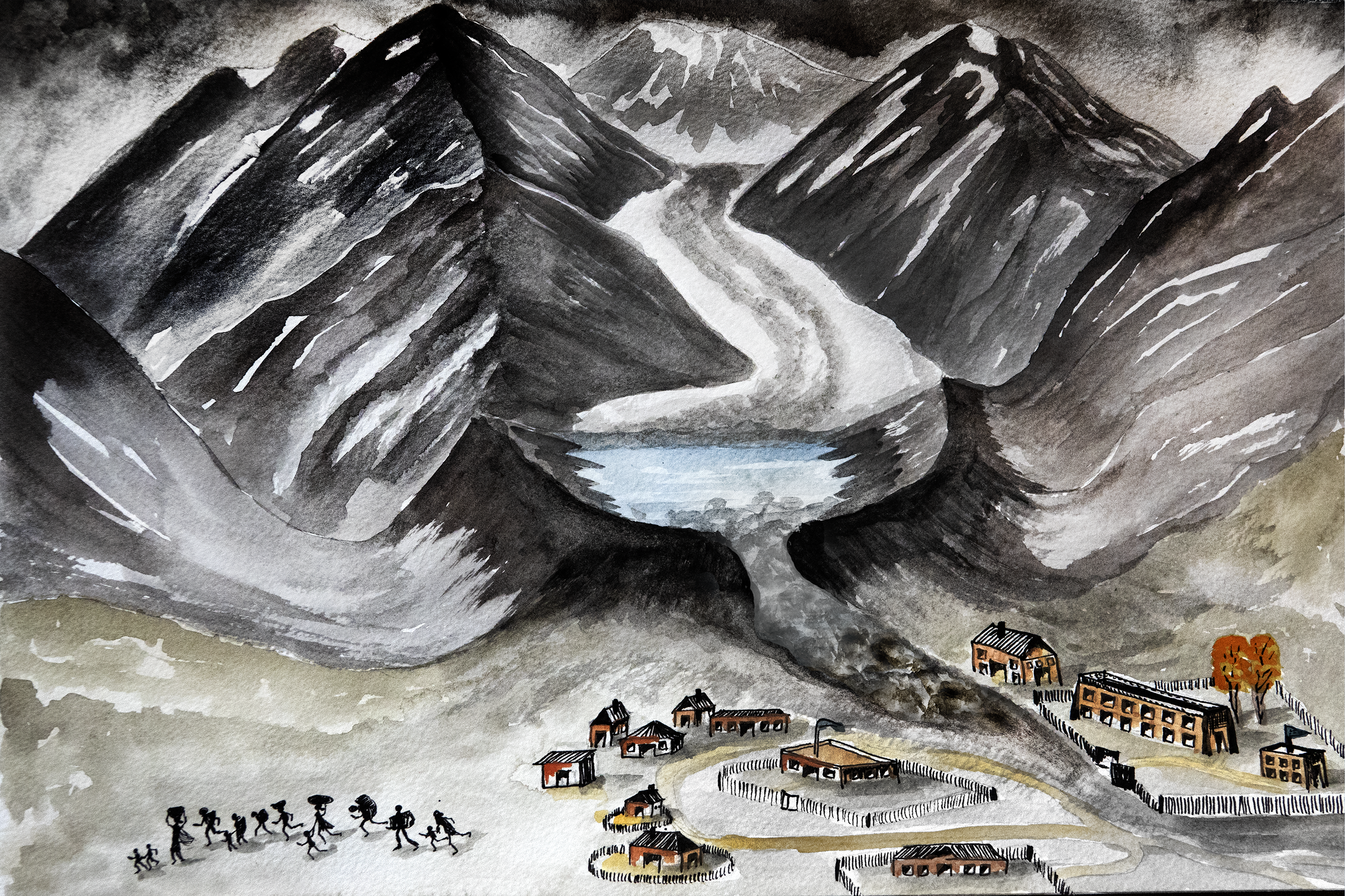 While it is very difficult to predict individual GLOFs, it is clear that their frequency will go up as the climate warms. Since the 1990s, glacial lakes across the Hindu Kush Himalayan region have increased in both number and size. Given the regional disparity in elevation, the greatest increase has been in the eastern and central sections of the Hindu Kush Himalayas.

What is a GLOF?

A glacial lake is formed as the ice in a glacier melts and water fills up the space between the glacier and the moraine – the wall of debris – in front of the glacier. As the pressure of water increases – due to melting or a trigger such as a large ice avalanche into the lake – the lake may breach the containing moraine walls, potentially driving millions of tonnes of water, boulders and debris before it.

GLOFs can be devastating, as the resulting flash floods can devastate downstream habitations with little warning. Given the number of hydropower projects in the region, GLOFs can also pose a risk to long-term infrastructure such as dams.

The permafrost is melting

Not all frozen water in the Hindu Kush Himalayas is in the form of glaciers. Glaciers are often referred to as rivers of ice, as they are large frozen volumes of water that slowly flow. Where there is less flow, but the temperature remains below freezing, ice accumulates in the ground as permafrost. As a general rule of thumb, humid areas have more glaciers while arid areas have more permafrost. In the Hindu Kush Himalayan region, permafrost is found across around 1,000,000 square kilometres, whereas glaciers occur across around 90,000 square kilometres. 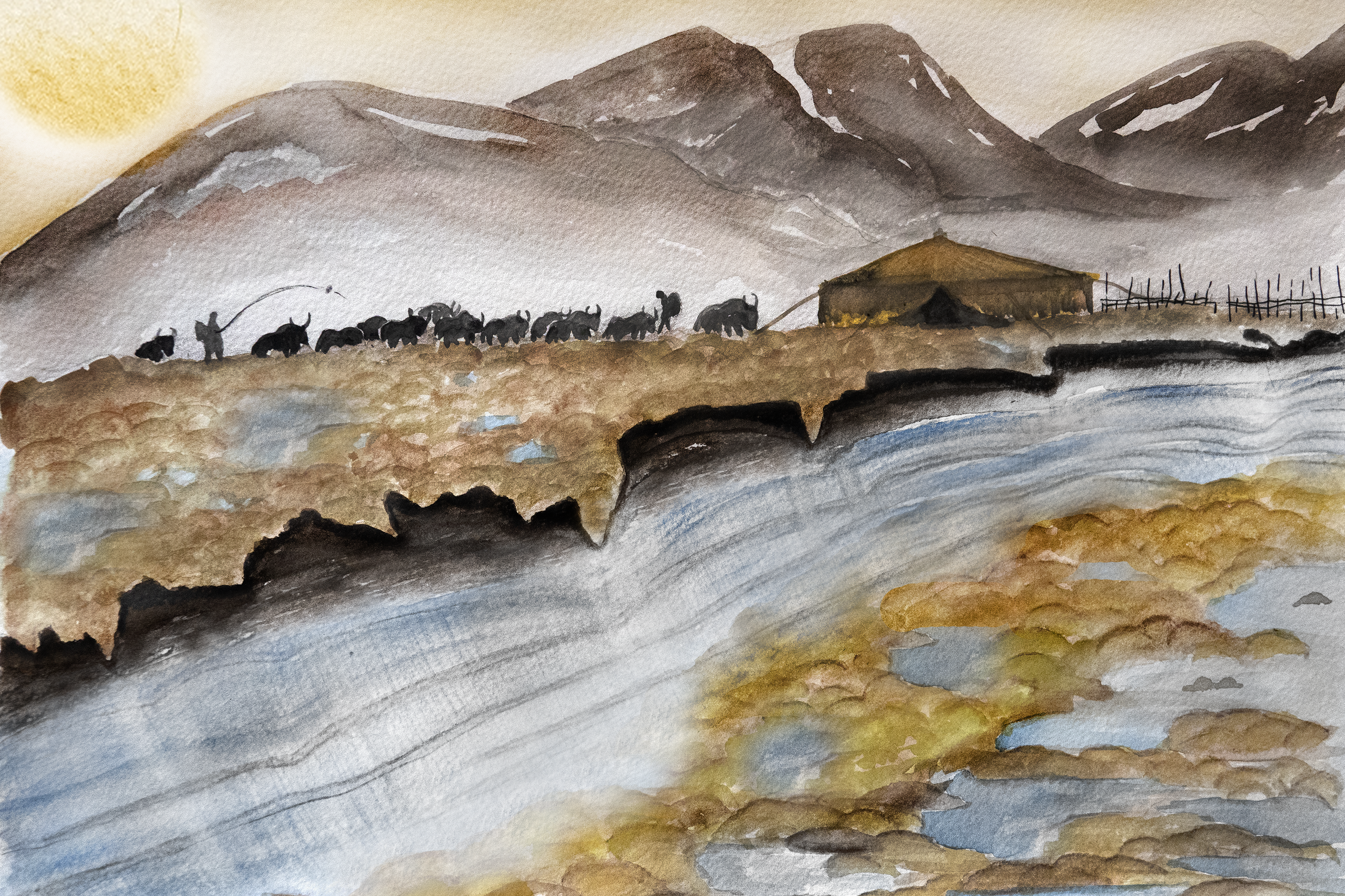 Permafrost is usually defined as ice in the ground that has remained frozen for two years or more. The upper area of permafrost, where the ice may melt, is called the active layer.

Three main policy recommendations emerge out of the latest, most detailed survey of the cryosphere in the Hindu Kush Himalayan region (the HKH Assessment) as part of the Hindu Kush Himalayan Monitoring and Assessment Programme conducted by the International Centre for Integrated Mountain Development (ICIMOD). First and foremost, the world must focus on lowering carbon emissions. The challenges of managing the cryosphere will only increase if the world warms at a faster rate. Second, the HKH Assessment recommends the expansion of observation networks and data-sharing agreements across the extended HKH region. Third, improvements in research and observation should be used to anticipate disasters such as GLOFs and avalanches, and put processes in place to minimise their impacts. 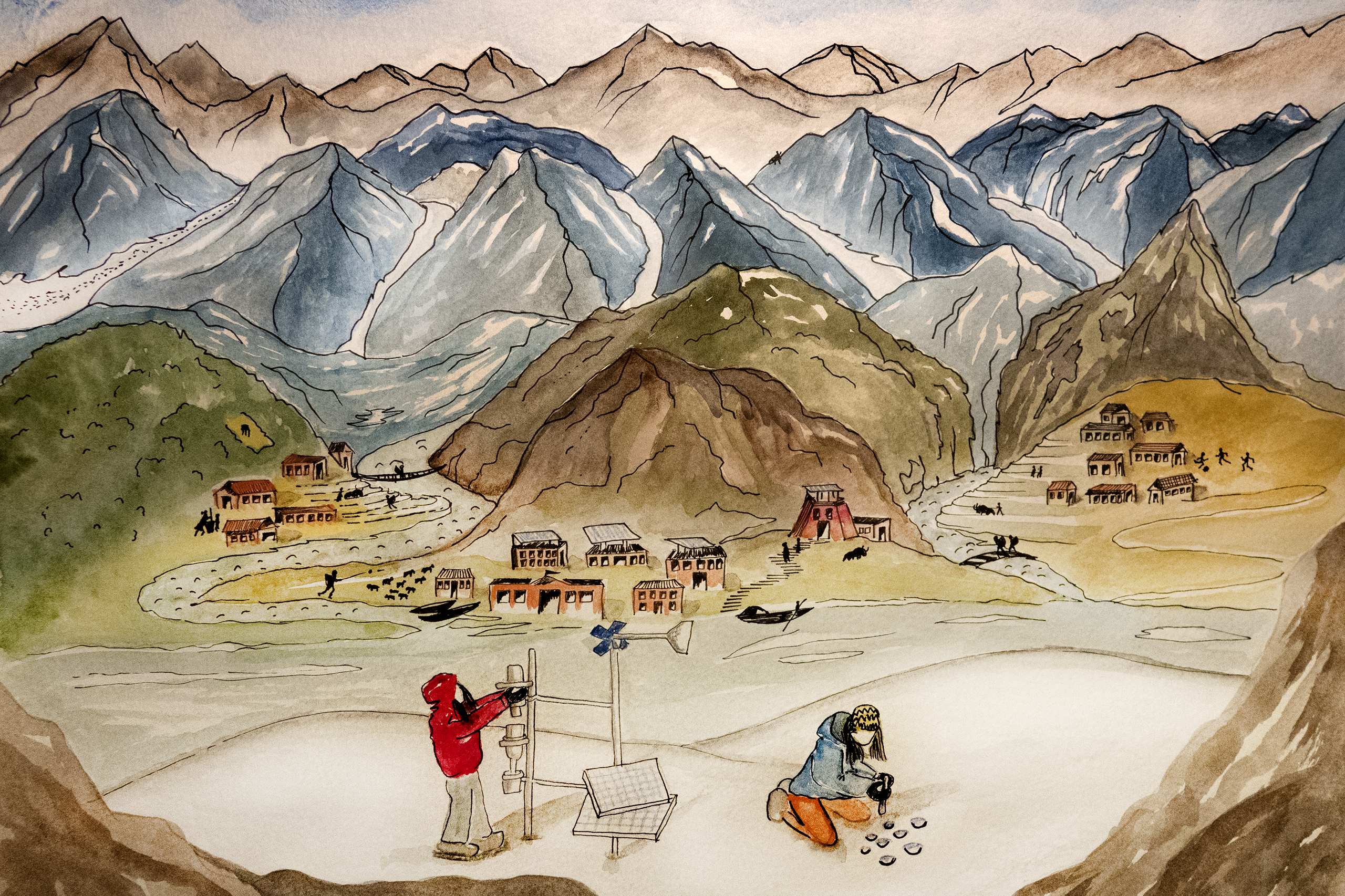 The data in this explainer is based on the HKH Assessment report. Any errors of interpretation are the author’s.

As glaciers disappear, can we be far behind?

'ICIMOD’s work is aimed towards goal of resilience building'