“Mosquitos and tourists!” Chokdup Lachenpa shouts at no one in particular as he takes a long sip of Tongba (hot beer) from his bamboo mug.  As if on cue, the children chorus, “The first is because of climate change and the second is the cause of climate change,” causing much mirth and laughter among the customers. We are sitting at Chokdup’s daughter’s tiny teashop-cum-bar in Lachen, a small village perched 2,750 metres above the mean sea level (MSL) on the right bank of the Lachen Chu river in North Sikkim. Outside, in the foggy twilight, across the Himalayas, we can see the headlights of a cavalcade of vans and jeeps that will soon bring hundreds of tourists to Lachen for a night’s halt. 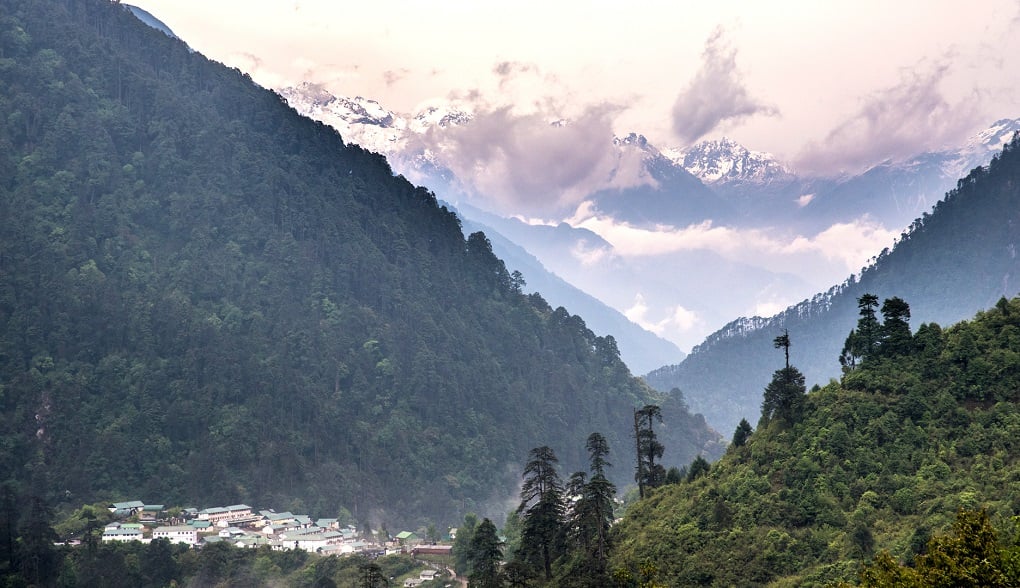 A view of the Lachen Valley

Situated on a grassy mountain slope, surrounded by snow-capped peaks and forests of rhododendrons and conifers, Lachen is so beautiful it has been declared a “heritage village” by the Sikkim government. And that is its problem. The tag is accompanied by “eco-tourism homestays” pushed strongly by bureaucrats.

It is the last stop for tourists going to Gurudongmar Lake, 5,430 metres above sea level. Buddhists and Sikhs consider the lake sacred. Now, tourists from Maharashtra and Gujarat seem to be competing with the peripatetic Bengalis to make Lachen the number one tourist attraction in North Sikkim.

What most of the tourists won’t know is that Lachen valley is facing a massive climate crisis. Behind those welcoming smiles, the Lachenpas – the local residents, an indigenous tribe of the Bhutia community – are a worried lot. Reduced snowfall, unseasonal rains and the forest fires of last summer have made them all very anxious.

To make matters worse and potentially dangerous, Lachen is in the path of the streams flowing down from the growing Lake Shako Cho. The lake at the snout of the glacier by the same name is growing because the glacier is melting faster. It is identified to be at high risk of causing a glacial lake outburst flood, a type of flood that occurs when the gravel holding in such a lake collapses. 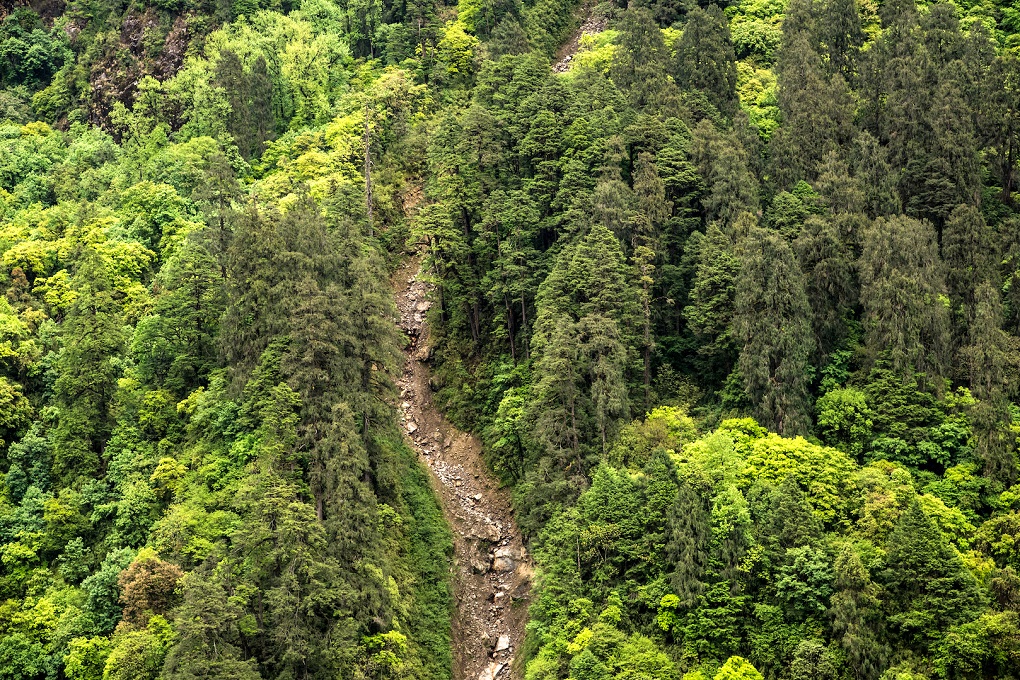 A dried up snow stream in Lachen

According to an independent risk assessment modelling by a group of scientists led by R. Worni, “The natural gravel embankment holding the Shako Cho Lake inside could burst at any time, releasing a tidal wave of water. Thangu, a village of about 100 homes immediately below the lake, would be obliterated. The ensuing flood could also demolish houses here in Lachen, 11 miles farther downstream, especially those near to the unstable bluffs of the lake-fed river that runs just east of the village.”

Climate change is already decimating mountain glaciers almost everywhere on earth at the rate of 3% every year. In India, Himalayan glaciers have lost about 10% of their volume in the past four decades. The Jemu Glacier, not very far from Lachen, has retreated by around 20 metres per year during 1975-90, scientist Jagadish Bahadur wrote in his book titled Himalayan Snow and Glaciers – Associated Environmental Problems, Progress and Prospects.

Even Gurudongmar Lake, the local attraction, has shrunk considerably, according to the residents, raising a question about the sustainability of the tourism industry. The rich biodiversity is also at risk.

“Lachen was the first village to ban plastic water bottles in India. We have always practised organic farming, we have no industry that emits carbon dioxide, we have no emissions, we own very little, nothing compared to the people from the cities,” Hishey Lachenpa states as she serves me another glass of hot tea. 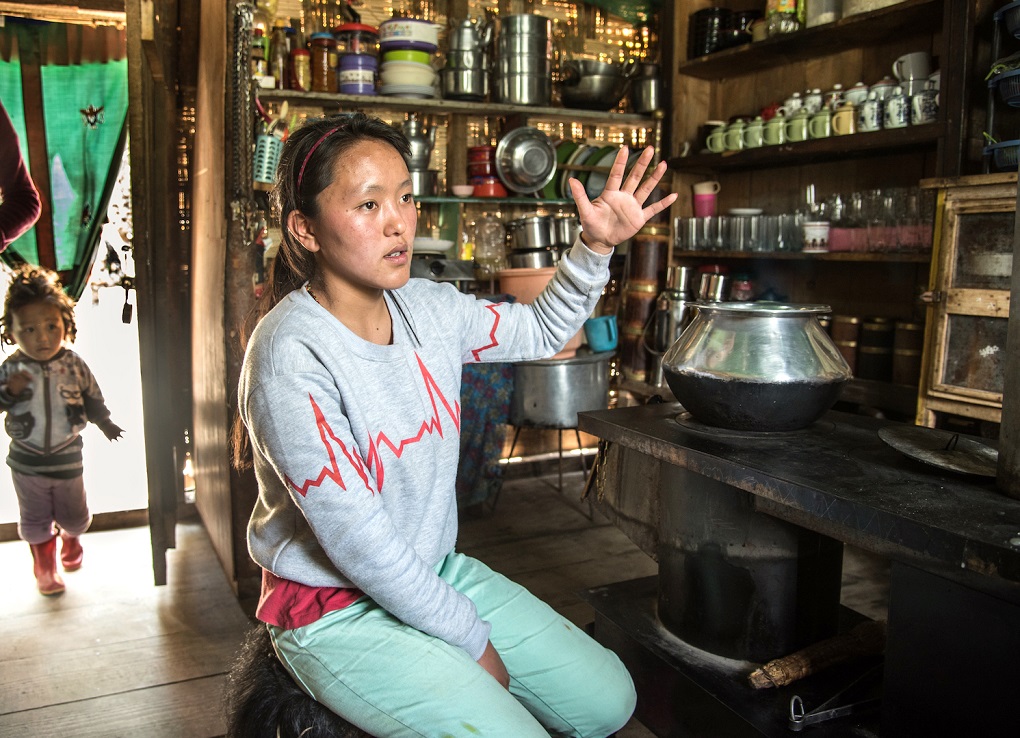 Hishey is 18 years old and studies in class 12 in a public school near Gangtok. She is back home during the summer vacation to help her mother, who has converted a tiny 12 x 12 feet toehold into her home, grocery store, teashop and bar. Hishey’s father is a monk and rarely visits them. She sleeps here with her mother, sister and an adopted younger brother.

“This year we had very little snowfall. Normally we have snowfall from December to February. This year we had snow only in December and then a little in January. But the rains seem to have come early. It will surely affect the potato farmers in Thangu.” Hishey, who has studied climate change at school, says with some authority.

A flash of lightning heralds the long threatened storm. Two men walk into the teashop with the news that a landslide has blocked the road to Gurudongmar lake and the Indian Army can do nothing about it until the next day. So there is no need to wake up and leave at 3 the next morning. They buy two nips of rum, borrow two glasses and disappear quickly. 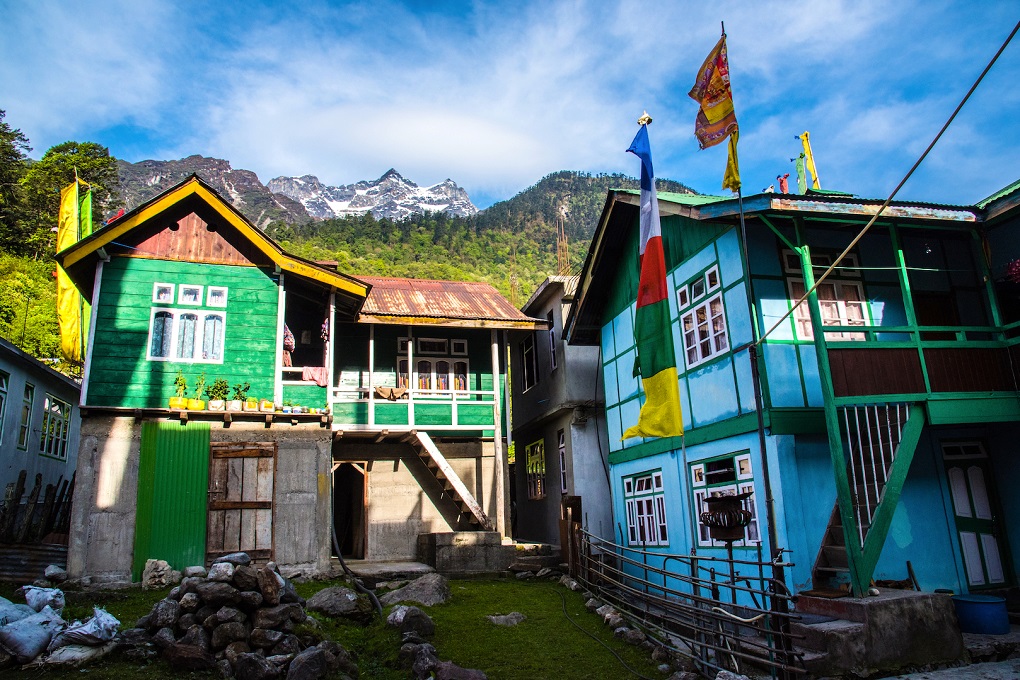 Gatuk Lachenpa’s house is the oldest in town, a simple two-storeyed stone, earth and lime structure that withstood the September 18, 2011 earthquake. But almost 70% of such old houses in Lachen have now been torn down to make way for gaudily painted, hurriedly built, brick and cement tower blocks, which look most fragile and unsafe, but will help maximise the benefits of tourism.

“Traditionally, Lachenpas used to cultivate barley, maize and buck wheat for their staple and potatoes, turnips, radishes, cauliflowers for their vegetables. But due to erratic weather and fear of water scarcity in the future, most of them are increasingly abandoning their farms to profit from the booming tourism business,” says Gatuk, a farmer who has just built a 50-room hotel, right next to his ancestral home in the middle of the village.

“Peak tourist seasons are March through May and September through November.  Seventy percent of tourists passing through Lachen are Indians. They typically stay 1–2 nights in Lachen before heading off to Gurudongmar Lake. It is good business. We have to make the most of it till it lasts. While maximising the benefits of tourism, we have to minimize its negative impacts.”  Gatuk says.

Measures like banning plastic drinking water bottles and segregated garbage management and replanting of trees are seen as steps towards minimising the negative impacts of tourism. But Lachenpas do not know how to cope with climate change impacts and least of all about what to do if the lake overhead bursts its banks.

Sikkim’s chief minister Pawan Chamling had once famously said, “Sikkim is a mini-theatre which in a way displays how climate change triggered by non-natural forces at the global level could bring disastrous natural calamities.”

Lachen clearly is the main stage where all the catastrophic scenarios predicted by the Intergovernmental Panel on Climate Change (IPCC) are being played out every day.

“The biggest worry is water scarcity. We used to get about 10 feet of snow but last few years we have only received 2 feet. The barren patches on the Angden Lama peak where our water comes from is a constant reminder of how climate change will change everything for us in the near future.” says Palzar Lachenpa, the current Pipon of Lachen, the traditionally elected head of the local government, the Dzumsa.

“We have only just recovered from the devastation caused by the 6.9 magnitude earthquake of September 2011. All the houses have been rebuilt. Many have added extra rooms to accommodate more tourists. We will never be able to recover from another disaster. We know we are sitting right under its nose, but what can we do?” Gatuk says worriedly about Shako Cho Lake.

Unseasonal rainfall, unusually stormy weather, landslides, receding glaciers, short winters, accelerated snowmelt, longer summers, fears of water scarcity, failed crops, mosquitoes, crows, tourism pressures and the clear and present threat of a lake that can burst its banks – Lachen is in grip of a climate calamity but this finds no mention in the Sikkim’s State Action Plan on Climate Change.

“We are doing more than our fair share to reduce carbon emissions but we need more information on adaptation to climate change, we have very little understanding of what is happening. Everything is unpredictable now — rain, snow, summer, winter, everything. We need precise weather information, we need early warnings systems and we need better predictions. More information, any information, to help me and the Dzumsa to better prepare our people for what is to come,” says the Pipon.

From drought to floods in 45 days

All eyes on China’s 13th Five-Year Plan for energy