A change in human behaviour is critical to save the adversely affected fish population of the Sundarbans, the world’s largest mangrove forest, according to a team of scientists. The range of advisable human activities need to be incorporated into government policy, and the best place to do so is the state action plan for climate change, the researchers said.

Suman Bhushan Chakraborty, a fish endocrinologist and assistant professor at the department of zoology, University of Calcutta, has been working along with his team in collaboration with counterparts at Visva Bharati University in Santiniketan in the state of West Bengal for three years to chart a how climate change is affecting the fish population.

The Sundarban estuary originally contained vast areas of seasonal and permanent wetlands. The elimination of these wetlands reflected massive human-caused changes to the landscape resulting from alterations of hydrological patterns because of diversions and changes in use of the land surrounding the area. As a result, today the Sundarban estuary is one of the most highly modified estuaries in the world. This estuarine ecosystem has lost much of its former variability and complexity, as indicated by major declines in the numbers of some of its commonly found fishes.

Chakraborty’s team has completed a 36-month survey for the development of integrated measurement and conservation of fish species of the Indian Sundarbans. They have talked with local fishers and farmers to get their input regarding the declining pattern of certain indigenous fish species. The study area is located in the reserved mangrove forest falling in the Kakdwip-Namkhana range of the Sundarbans within the 24 Parganas Forest Division. In this area, mangroves were lost due to encroachment, climate shift after Cyclone Aila (2009) and human intervention over a period of about 10 years.

“According to our survey and the statements of the farmers, the biggest threat to the fish and other aquatic animals is the invasion of salt water and sudden increase in salt concentration during last 15-20 years and other anthropogenic activities that are altering the physical factors of the aquatic system,” Chakraborty told indiaclimatedialogue.net.

“I measured salinity in 52 points in Sundarbans’ villages just one week before Cyclone Aila, and even after nine years the worst effects are yet to be removed,” said Subir Ghosh, a veteran wetland scientist who has a research interest in the flora of the Indian Sundarbans.

Chakraborty’s research team has been studying 8-10 species of fish by examining their biological aspects (sampling done every month) and scrutinising the endocrinological data every month. Out of this, attention has been focused on five edible varieties for local consumption and supply to Kolkata. These are bhetki (Lates calcarifer), nona tangra (Mystus gulio), sona tangra (Mystus tangra), chital (Notopterus chitala) and falui (Notopterus notopterus). The physiological data for these fish is compared with production data from the fishermen.

In Bidyadhari delta near the Bali Island (around 70 km from Bakkhali), due to human encroachment and other impacts of humans on nature, the surrounding land mass is increasing rapidly, shortening the inner aquatic habitat. The depth of the water column remains low (average depth less than 1 ft/30 cms) due to increased sedimentation for most of the time of a year (average 280-300 days). Due to low water depth and stagnancy of water, most species are on the verge of losing their natural habitat and are becoming vulnerable. Therefore, the body of water is losing most of its aquatic biodiversity. 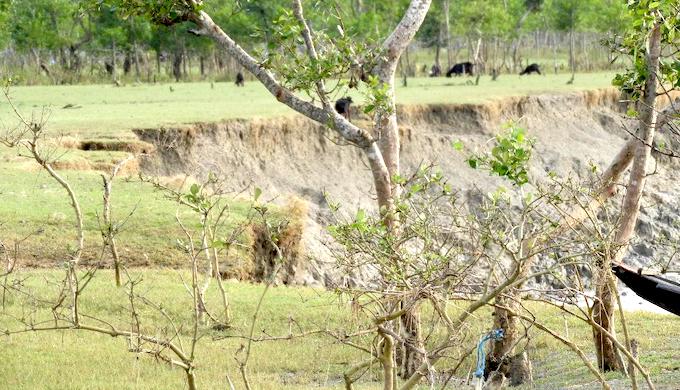 The research site at Bali Island. (Photo by Dhruba Dasgupta)

Another noticeable issue is the change in the pattern of tidal currents and the negative effect that this has had on breeding patterns and on the lifecycle of the fish. Chakraborty and his team have identified four visible reasons for early death of the fish: Change in tidal pattern and movement of water that leads to change in tidal bed; birds consuming fish as water level abruptly decreases; bigger fish consuming smaller fish as the water level goes down, increasing the predation pressure on the population of the smaller fish; and humans catching the fish that have come to breed, since change in tidal patterns exposes the fish.

“Due to indiscriminate fishing, there is a noticeable squeeze in biomass. People catch local fish varieties, juvenile prawn, crabs and other molluscs together, all in their eagerness to obtain the juvenile prawn, which they call meen.

This has a very destructive effect because it abruptly terminates the lifecycle of the fish,” Mohammad Moniruzzaman, who is part of Chakraborty’s team, told indiaclimatedialogue.net. “Sadly, people are not even willing to throw back to the sea the live juveniles of the biomass that they incidentally haul up in their nets while scouring the waters for the meen. Any number of requests to these juvenile hunters falls on deaf ears.”

Harvesting juvenile prawn, though banned, has continued unabated and this has contributed to loss of fish diversity, said Ghosh.

To add to indiscriminate fishing facilitated by tidal changes, excessive use of monofilament nets to catch surface feeders has also led to unnecessary netting of small-sized fish. Intensive misuse of trawl nets for bottom trawling results in change in turbidity and that in turn, adversely affects the fish habitat.

Another problem is the steady change in the economic valuation of fish varieties. For example, Ailia coila —a near threatened fish in the IUCN Red List (2011) — did not fetch any economic returns earlier as it was seldom consumed. However, with the passage of time, the demand for this fish variety has gone up, and so the rush to catch it has been on the rise.

Policy interventions are urgently needed, Chakraborty said. “The alteration in tidal patterns has not been matched by corresponding correct information on the changes in reproductive patterns of fish,” he said. “So the ban periods that are enforced by the Department of Fisheries need to be reworked according to updated information.”

His team has recommended a spectrum of ban periods to the fisheries department. Such bans can be facilitated only when the information obtained by researchers from the field and validated by fish farmers, is communicated to the policy maker. This has not been the case, as it appears from the field experience of the team. 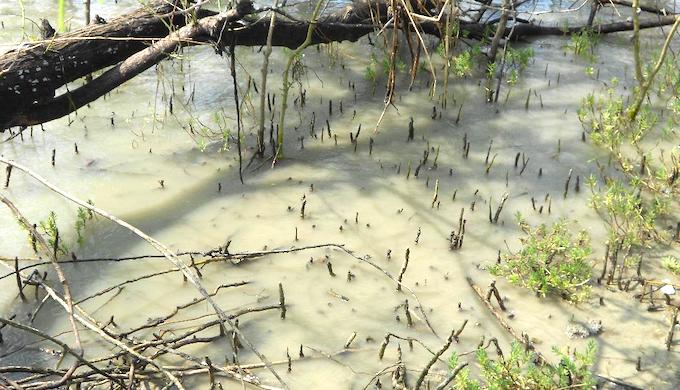 Corroborating this observation, Ghosh told indiaclimatedialogue.net: “Many researchers come to the Sundarbans, but do not communicate their findings to policymakers. The actual loser is the fish farmer, especially the small fish farmer, who stands to take the biggest hit due to the dwindling fish catch.”

Trawlers have emerged as the biggest menace in the list of human disturbances in the Sundarbans. A 370 horsepower engine guzzles 40 litres of oil in an hour. Besides polluting the aquatic environment, trawlers have, at least for the past two years, made it a practice to stay out at sea during the period when the  signalling of bans is announced jointly by the Department of Fisheries and the Meteorological Office.

The fourth signal signifies a complete ban. In fact, sea-bound vessels are supposed to come back when the third signal is announced. But, the trawlers stay on at their own risk and have stuck steadfastly to going out to sea at the announcement of the fourth signal, staying for 17 hours and coming back with an unhindered catch when the other conventional vessels are not going out to sea.

This behaviour has its own risks. Recently, between July 16 and 31, four fishing trawlers capsized in the coastal waters of West Bengal, killing 27 fishermen. The trawlers ventured out to the sea in spite of repeated warnings issued by the Department of Fisheries, it was reported.

The Dakshinbanga Matsyajibi Forum (DMF), a non-political union representing fishermen in southern West Bengal, pointed out in a press release dated 10 August: “The owners of the trawlers… need fish to make a profit and the crew are paid by percentage of the sale proceeds of the catch. So the economic interest provokes them to go to sea defying warnings.”

DMF has strongly called for the Department of Fisheries to close their fishing harbours to sea-bound vessels after issuing warnings. They have also demanded the putting in place of a system of checking seaworthiness of the fishing vessels while issuing license for fishing.

The West Bengal Action Plan for Climate Change, the document that is best suited to incorporate policy changes for tackling climate change in the Sundarbans, is due for its updated version being released. The current version, however, says little about any concrete plan to tackle climate change due to human causes in the Sundarbans.

Save lives, train women in Nepal and India to deal with disasters

The river ‘is not for sale’ warn Mekong villages