Wildfires described as “the worst in a decade” have engulfed Himalayan mountain states in a thick haze and killed at least eight people in the Indian states of Himachal Pradesh and Uttarakhand. Seven were killed in neighbouring Nepal, where wildfires raged across several districts and forced a four-day school closure.

Smoke from these wildfires made the air quality of Nepal’s capital Kathmandu the worst in the world in early April, with the air over Bhutan and northern Bangladesh also hazardous. The haze was strengthened by more wildfires along the Nagaland-Manipur border in northeast India.

Aside from hazards to human health, these fires pose major threats to forest and biodiversity conservation. Wildfires endanger people, homes, farms, animals and release carbon dioxide – the world’s most ubiquitous greenhouse gas and a primary driver of climate change. According to one estimate, the 2021 wildfires in Uttarakhand alone have led to the release of 0.2 megatons of CO2 – the highest since 2016.

November to May is wildfire season in the Himalayas, with a peak in March-April. However, administrators and experts described the current wildfires as the worst in a decade or more. Since December 2020, over 1,000 wildfires have been recorded in Uttarakhand – a state that has over 45% forest cover in contrast to India’s overall forest cover of 21.67%. In Nepal, nearly 200,000 hectares of forest area are lost to wildfires each year.

Almost all forests in South Asia are surrounded by human settlements, with locals dependent on them for essentials such as fodder, fuelwood and housing material.

India’s National Disaster Management Authority (NDMA) said most of the fires are caused by humans, sometimes deliberately. But experts said that dry forest floors caused by scant rainfall or snowfall in the past two winters have helped the fires to spread in the central and eastern Himalayas. Additionally, Uttarakhand recorded a rainfall deficiency at 18% in 2019 and 20% in 2020, even as India as a whole had near-normal monsoon rainfall.

The UN’s Intergovernmental Panel on Climate Change (IPCC) said rainfall and snowfall are more uneven due to global warming – a pressing issue for South Asian countries now facing more frequent and deadly heat waves. As these wildfires rage across forests, leaders of India, Pakistan, Bangladesh and Bhutan are scheduled to attend a virtual climate summit led by US president Joe Biden, who hopes to reach deals with some of the world’s biggest polluters.

It has been weeks since Kathmandu residents saw the sun, with smoke covering the sky. The forest fire monitoring and detecting system established by NASA in collaboration with the government of Nepal showed red and orange hotspots along the foothills. Kathmandu’s air pollution level for particles smaller than 2.5 microns (PM2.5) was 15 times higher than the 25 micrograms per cubic metre (µg/m3) ceiling recommended by World Health Organization for a 24-hour period.

NASA’s Fire Information for Resource Management System shows a satellite image of hotspots of fires burning across Nepal on the morning of 28 March. (Image: NASA FIRMS)

Though the forest fires garnered attention for contributing to air pollution, they are not the main cause of air pollution in the region. The International Centre for Integrated Mountain Development (ICIMOD) pointed out: “Biomass burning is a primary driver of air quality reduction in the HKH [Hindu Kush Himalayas]. Open waste burning is ubiquitous year-round. In comparison, forest fires contribute to less than 10% of the overall atmospheric pollution.”

Nepal’s National Disaster Risk Reduction and Management Authority (NDRRMA) recorded over 2,700 wildfires since November 2020 – the highest in a decade. NDRRMA said nearly 200,000 hectares of forest cover is affected by fires every year in Nepal. “More than 690 people have lost their lives in the last decade and over 15,000 forest fire incidents have been documented during this decade,” said Janardan Gautam, a spokesperson for the NDRRMA.

Seven firefighters have lost their lives. Over 800 wildfires were detected on 4 April alone. The number of wildfires is already four times higher than in 2020, with the peak of the current wildfire season still expected. 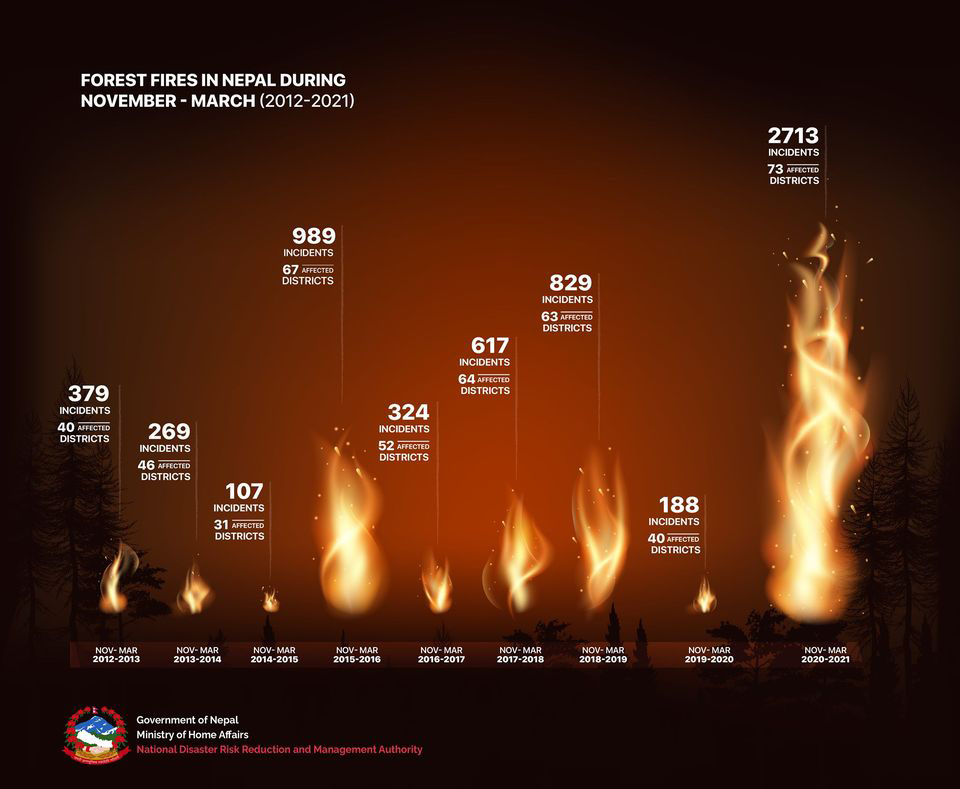 An illustration of forest fires in Nepal from 2012 to 2021. (Image: National Disaster Risk Reduction and Management Authority)

Authorities in Nepal ascribe the same causes for wildfires as their counterparts in India. “Nearly 64% of total forest fires in Nepal are deliberately induced by humans for several reasons including clearing up grasslands and forests for better regeneration whereas rest could be accidental,” said Sundar Prasad Sharma, forest fire expert and under-secretary at the Department of Forests and Soil Conservation, part of the Ministry of Forests and Environment.

There has been little effort to curb the problem. “We lack adequate resources to fight against it but more importantly, we don’t have will. We need to take this issue much more seriously,” Sharma added.

Majority of forests face the fires

As India continues to count the number of wildfires this season, the Forest Survey of India (FSI) said 37,059 fires were detected in 2018 using MODIS (Moderate Resolution Imaging Spectro-radiometer) sensor data. “Every year large areas of forests are affected by fires of varying intensity and extent,” the FSI said, adding that 54.4% of forests in India are exposed to occasional fires, 7.49% to moderately frequent fires and 2.405% to high-incidence levels. According to its records, 35.71% of India’s forests have not yet been exposed to fires of any real significance.

Indian magazine Outlook reported that 476 fires in a fortnight caused a loss of 4,555.35 hectares in Himachal Pradesh’s forest wealth. The report also said that over 8,455.2 hectares of forests were damaged by fires in March 2021.

There were no major wildfire reports from the mountains in Pakistan this year, but residents told The Express Tribune that wildfires killed scores of wild animals, including leopards, foxes, jackals, deer and partridges every year. Amna Sardar, an environmentalist from Galiyat and a former member of the Khyber Pakhtunkhwa provincial assembly, told the newspaper the forest department had failed to devise a strategy to overcome the issue.

Government records show more wildfires in northern Pakistan in the financial year 2018-19 than in the previous three years.

As the frequency and damage mount, authorities are forced to take the issue of wildfires more seriously. Krishna Vatsa, a member of India’s NDMA, told the BBC: “The reason why we have not listed forest fires as natural hazards is because in India most of such fires are deliberately caused by people mainly for agricultural purposes and, therefore, it is an anthropogenic [man-made] hazard.”

“But we do recognise that forest fires are becoming a serious hazard and that is why we are working with forest departments and other agencies of all the states to deal with the issue.”

‘More people die of drought than all other calamities put together’