Wildfires and flash floods are two of the most visible symptoms of climate change across the Himalayas.

The two phenomena are more connected than you might think. Experts believe that more intense forest fires are a major reason for the rise in flash floods in the Himalayas over the past 20 years. Here we explain this connection, why experts refer to this as a ‘vicious cycle’ – and some of the possible solutions to break it.

Forest fires across the Himalayas

Between 2001 and 2021, more than 35,000 hectares of tree cover were lost to wildfires in the Himalayas, according to Global Forest Watch data. (This figure refers to wildfires across Nepal and Bhutan, and Himalayan areas of India and Pakistan.) Analysis of this data shows that the total area of forest that was burned to some degree was 1.4% greater in 2011-2020 than in the previous decade, rising from over 7,200,000 hectares to more than 7,300,000 hectares.

While comprehensive data is difficult to obtain, there are indications that forest fires have been intensifying in parts of the Himalayas in recent years. Officials in Nepal said that the November 2020-March 2021 fire season was the country’s worst since records began in 2012. Similarly, officials described the number of fires reported last year in areas of northern Pakistan as “unheard of”.

Forest fire alerts between December 2021 and May 2022. The fire season in the Himalayas usually runs from November to June, with March and April the peak months. (Source: Global Forest Watch)

“What we’ve seen on a global scale is that hotter and drier conditions caused by climate change can make forests more prone to wildfires,” says James MacCarthy, a research analyst at Global Forest Watch. “As fire incidences expand into higher elevations in the western Himalayas, forest fires could become more widespread in that region, with some data suggesting they already are.”

Experts say the number of wildfires is influenced by a combination of climate change and forest governance.

Hemant Dhyani, convenor of the Ganga Ahwan movement, which works to protect and conserve the Ganga River and Himalayas, says the biggest factor is changing rainfall patterns. “The precipitation during winters has gone down,” says Dhyani. “The soil is becoming dry. Fires which were earlier spread over just one hectare are now spreading over 5-10 hectares as there is no moisture in the soil to limit its spread.”

More frequent heatwaves are also partly to blame, according to Anil Prakash Joshi, founder of the Himalayan Environmental Studies and Conservation Organization, an Indian NGO that provides technological help to farmers in the Himalayas. Heatwaves not only increase the chance of a wildfire, by creating a hotter and drier landscape, but also cause plants to shed more of their leaves, providing more fodder for fires and increasing their intensity, says Joshi.

According to Ravi Chopra, founding director of non-profit the People’s Science Institute in Dehradun, Uttarakhand, poor forest governance has played an even bigger role.

He says that local communities are increasingly alienated from the forests, citing the erosion of the van panchayat system. Starting in 20th-century India, these village forest councils governed the forest area surrounding their respective villages and empowered the local community to control their own resources. However, a number of legislative changes over the past 100 years have weakened the system and handed decision-making power to forest department officials.

“Nowadays, whenever there is a forest fire, villagers think that it is the job of the government to bring it under control… They do not feel any ownership or sense of belonging with the forests. That old scene of villagers rushing out with buckets of water to put out the fire is missing now,” says Chopra.

Experts say that climate change and poorly planned development projects are two important factors driving an increase in the frequency and intensity of flash floods in the Himalayas. In the Indian Himalayas, while winter precipitation has gone down, cloudbursts and extreme rainfall events have become much more frequent, says Samir Kumar Sinha, head of conservation at conservation non-profit the Wildlife Trust of India.

“The amount of rain which earlier used to fall across an entire month now falls in just 10 days,” Sinha says. Between 2001 and 2016, there were 17 instances of cloudbursts in the Indian Himalayas, resulting in more than 7,000 deaths, according to data compiled by HydroSense Lab at the Indian Institute of Technology Delhi and shared with The Third Pole. In contrast, in the three decades from 1970 to 2000, there were only 13 instances of cloudbursts, and 901 deaths.

But experts who spoke with The Third Pole added that there is another phenomenon driving the increase in frequency and intensity of flash floods in the Himalayas: forest fires.

How soil links fires and floods

In a healthy forest, the forest floor is covered with vegetation and dead plant material. Animals like worms aerate the top layer of soil as they burrow through it, making it permeable and able to soak up water. “During cloudbursts and extreme rainfall events, biomass present on the forest soil acts as a sponge and soaks up the water,” Sinha says. “The water, instead of flowing downhill, seeps into the ground.”

Plant roots and organic matter also hold the soil together when there is strong wind or heavy rainfall. 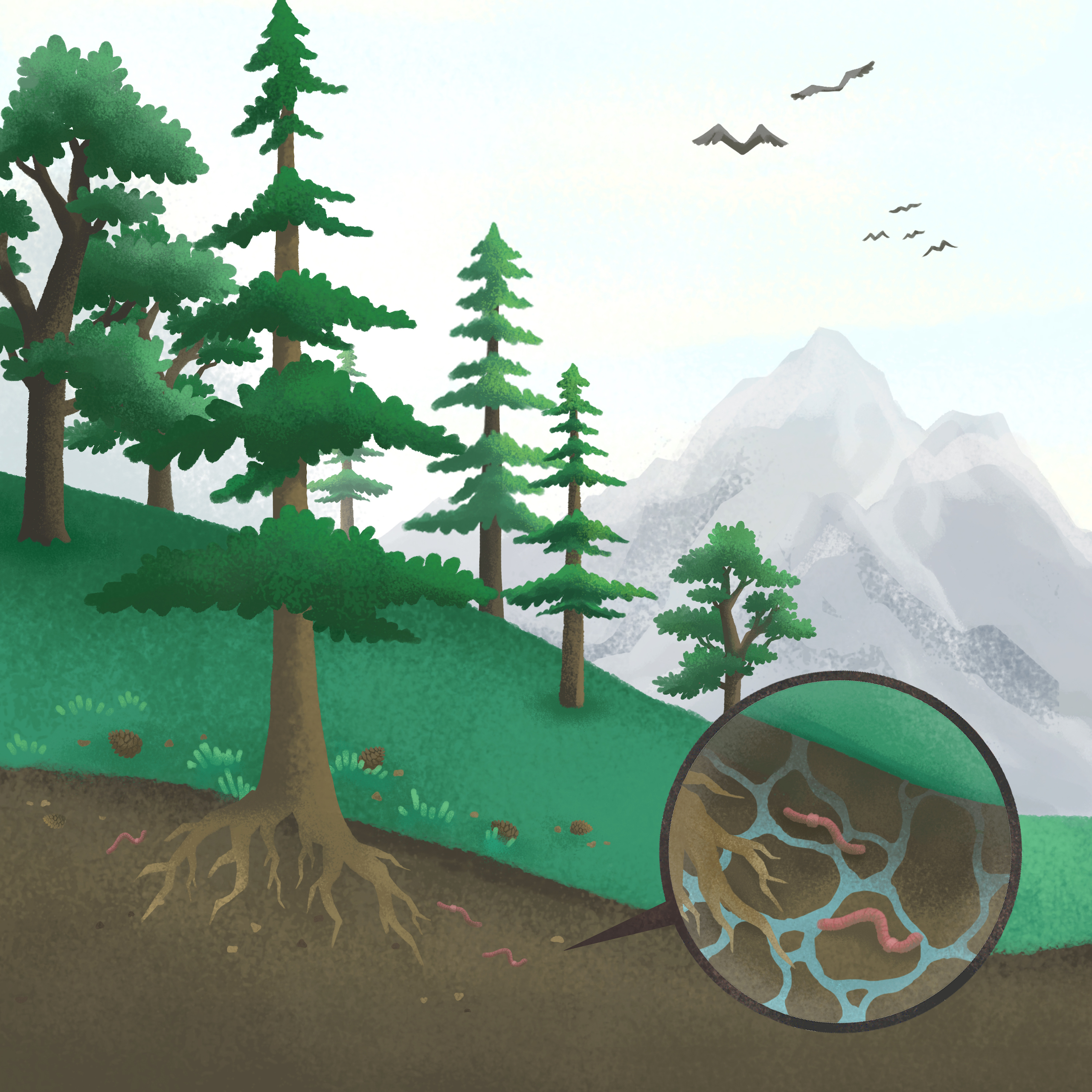 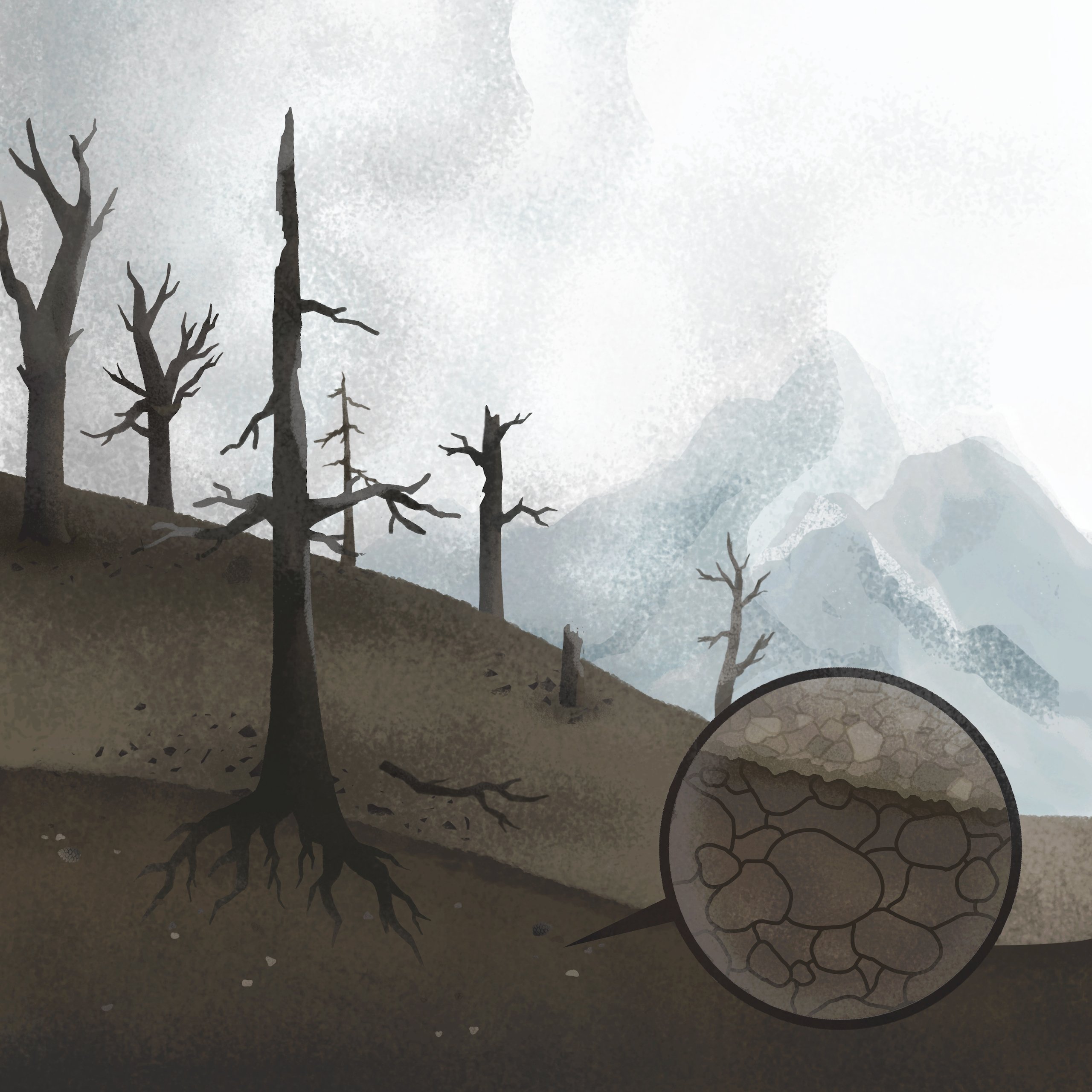 Soil before and after a wildfire, showing how a healthy forest floor is able to soak up water, whereas soil after a fire can form a solid crust (Illustrations: Neutron T / The Third Pole)

All this biomass is destroyed during a high-intensity forest fire. “Whenever there is a forest fire it desecrates the top layer of the soil, which is full of nutrients and usually takes 200-300 years to form,” says Chopra.

The biggest impact fires have on soil is that they make it less permeable. An intense forest fire burns the top layer of the soil, “which changes the structure and reduces porosity of soil”, Sinha explains. “The soil particles bind together more closely and compactly, making the top layer of soil water repellant. This hinders water infiltration and contributes to erosion and runoff.” As a result, the soil can’t absorb as much water as it could previously.

The heat also kills animals like worms, which means this change cannot be reversed quickly.

Instead, rain that falls on a recently burned mountain slope flows “along the surface and downwards into the river”, Sinha says. This water also carries the eroded topsoil, which becomes loose because of the wildfire. “With no vegetation present to hold the soil together [after a fire], it becomes more susceptible to erosion during extreme events like cloudbursts,” says Sinha.

As this mixture of excess water and debris flows into rivers, it “raises the height of the riverbed” says Chopra, causing the river to overflow, eroding the soil on the riverbanks and leading to flash flooding in the surrounding area.

And the more frequent fires and cloudbursts are, the less time soil has to recover, perpetuating this cycle.

What can be done to break this cycle?

In August 2022, a group of Indian researchers published the Doon Declaration on Forest Fires. It contains three main recommendations:

Other practical measures could help to deal with the problem. Hemant Dhyani says that the best solution to break the vicious cycle of fires and floods would be a grassroots social movement which empowers local communities. Restoring the old van panchayat system would develop a sense of responsibility and belonging among the villagers, incentivising them to protect forests in case of fires, he says.

Another potential initiative Dhyani suggests is the establishment of pine needle biogas plants. Pine needles are “one of the biggest aggravators of wildfires in Himalayas” says Dhyani. “The villagers should be asked to collect them, and government should buy them at 5-6 Indian rupees per kilogram. This will not only reduce the number and intensity of forest fires but will also provide employment.”

Phuntsho Namgyel, a Bhutanese forest scientist, advocates for a forest-thinning programme to prevent the spread of wildfires in the Himalayas. Pointing out that nearly 84% of Bhutan is covered by forest, Namgyel says these forests are “overstocked” with trees and are therefore “more susceptible to catastrophic forest fires. Forest thinning and small controlled burns can reduce the impact and threat,” Namgyel has said, writing in the Bhutanese newspaper Kuensel.

Researchers have also suggested encouraging livestock grazing in forests as this “breaks up potential fuel and establishes trails through the forest that can be used as fire breaks”.

Finally, Himanshu Thakkar, coordinator of the South Asia Network on Dams, Rivers and People (SANDRP), told The Third Pole that changes to infrastructure development in the Himalayas are needed to reduce the frequency and severity of flash flooding. The construction of roads, tunnels, hydropower plants and other projects in mountain areas causes soil erosion and leads to debris being discarded on the hills, he says.

In order to comprehensively address the problems of forest fires and flash floods, more structural top-down changes are required, says Thakkar – and these changes need to be at the government level, fundamentally altering the way forests are governed.

Best of 2022 on The Third Pole: Water in a climate-changed region