On the cusp of spring, residents of Karachi, Pakistan’s largest metropolis, braced themselves for the year’s first heatwave. Mercury levels rose to 44 degrees Celsius on April 3 – the highest temperature recorded in April since 1947 – foreshadowing a brutal summer ahead.

As dry heat settled across the city, weary shopkeepers near Karachi’s Empress Market pulled down their shutters for reprieve. Din Muhammad, a 65-year-old fruit seller, doused his turban in water, his beard dripping with sweat under the afternoon sun. “I have nowhere to seek shelter in this heat,” he told The Third Pole, gesturing towards the concrete jungle before him. There was no tree cover in sight.

The Covid-19 pandemic is surging across Pakistan, with the country’s third wave bringing the total number of critical patients to 3,568 on April 4 – the highest since the outbreak began. But Din Muhammad, who spends his days under the open skies breathing in Karachi’s smoggy air, said he was more afraid the heat would take his life than the virus. “God willing, I hope I am able to survive the summer,” he said.

In many South Asian countries, heatwaves start in May and extend to September. But this year the warnings of higher temperature were issued end-March. Though no alerts have been issued in Nepal, both Bangladesh and India are already experiencing high temperatures. On April 1, mercury levels in New Delhi hit 40.1C – the highest temperature recorded in 76 years. The India Meteorological Department warned of “higher than usual” temperatures in most parts of the country between April and June.

Sardar Sarfaraz of the Pakistan Meteorological Department attributed the early arrival of the heatwave to the shattering of traditional weather patterns – a consequence of climate change. This year in particular, a western disturbance enveloped the country with dry air in its wake, cutting off Karachi’s access to the balmy sea breeze, and causing temperatures to soar. “There is immense unpredictability now,” Sarfaraz added. In recent years, a spate of heatwaves has been recorded in Sindh province of southeast Pakistan. In 2015, Karachi’s heat index soared to 66C, killing at least 1,200 people with 40,000 suffering from heatstroke and heat exhaustion.

What is the heat index?

Also known as apparent temperature, the heat index combines air temperature and relative humidity. It is a measure of how hot the temperature feels to the human body.

Seemin Jamali, head of the emergency department in the city’s publicly funded Jinnah Postgraduate Medical Centre, said she “saw body after body” enter the emergency room at the peak of the 2015 heatwave. Most of those who died were elderly, had pre-existing comorbidities and lived in the slums.

Unpredictable and extreme weather made more likely by climate change is fast becoming a woe for the city’s 20 million residents. Last year’s monsoon brought the city to a grinding halt, as torrential rains – the heaviest since 1931 – and flooding left large parts inundated and without power for days. At least 41 people died. “As our city expands rapidly and concrete structures and buildings replace trees and green spaces, I am worried about our future,” Jamali said. 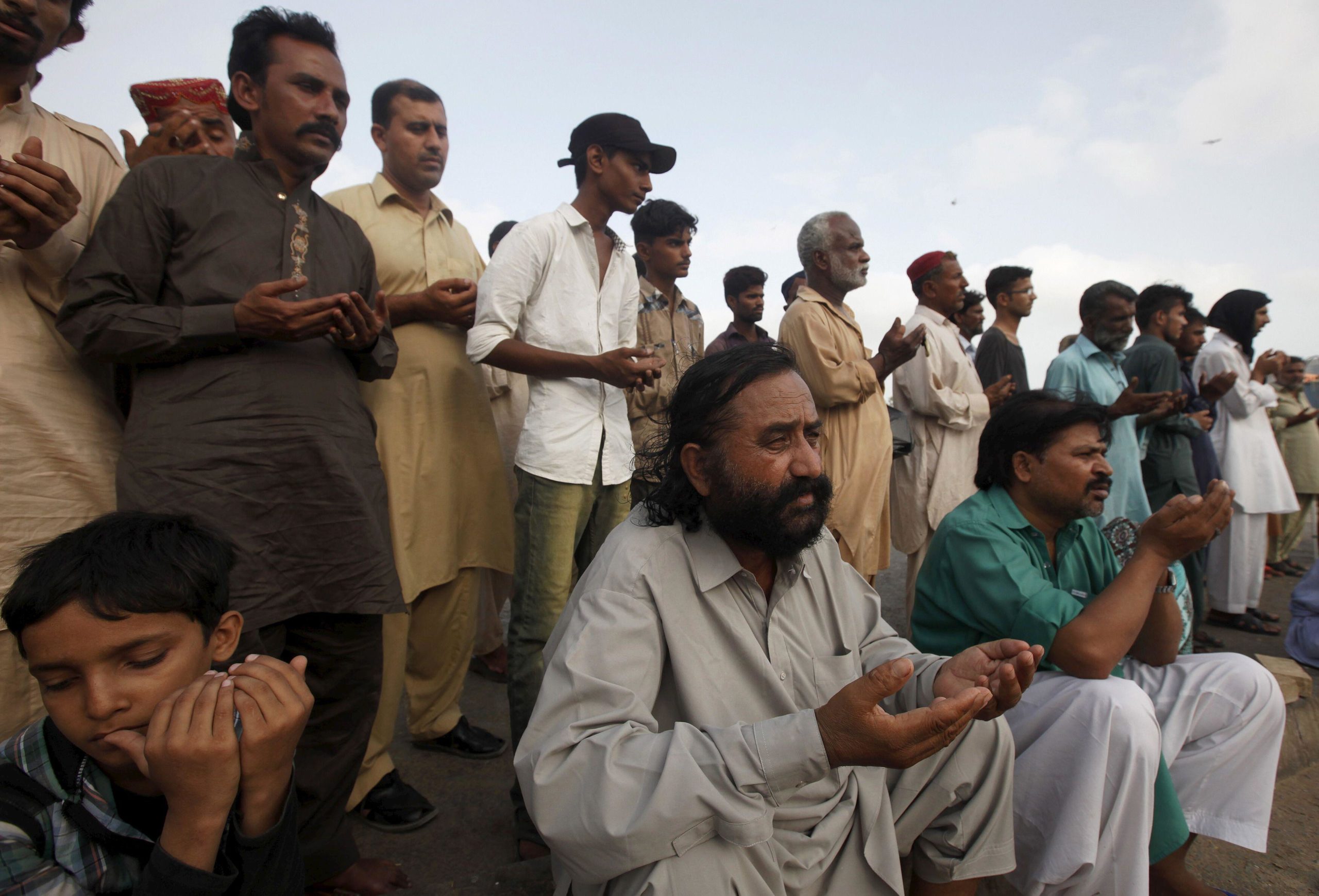 People pray for rain during the 2015 heatwave in Karachi, Pakistan (Image: Akhtar Soomro/Alamy-Reuters)

A study published by Geophysical Research Letters, a scientific journal, predicts that the worst is yet to come. Using climate simulations and projections of future population, the study concludes that, even if global warming is contained at 1.5C – as per the aspirational goal of the Paris Agreement – deadly heatwaves are likely to become more common across South Asia.

What is ‘wet bulb’ temperature?

A wet bulb temperature of 32C is when outdoor labour becomes unsafe, and 35C is the upper limit of human survivability, beyond which the body can no longer cool itself.

Fahad Saeed, lead author of the study, said millions of people across South Asia will soon be susceptible to deadly heat stress, as “wet bulb” temperatures climb above 32C.

In a region home to over 1.5 billion people, Saeed’s research rings alarm bells. Nearly 60% of South Asia’s population is engaged in agriculture, and rising temperatures are likely to impact crop yields and targets, as well as labour productivity. With infrastructure projects and new housing coming up all over South Asia, construction labour forms another vulnerable section of the population.

Coastal cities and the poor most vulnerable

Densely populated coastal cities like Karachi and Mumbai are particularly at risk. “Our atmosphere’s ability to retain moisture is increasing as a consequence of climate change, which means humidity will increase. This makes coastal cities particularly vulnerable,” Saeed said. “High levels of humidity coupled with soaring temperatures is a recipe for disaster.”

The study notes that the impact of soaring temperatures will be felt most by labourers and industrial workers in cities like Karachi, Peshawar, Mumbai and Kolkata: “those who do not have access to air conditioning, the poorest of the poor,” Saeed said. 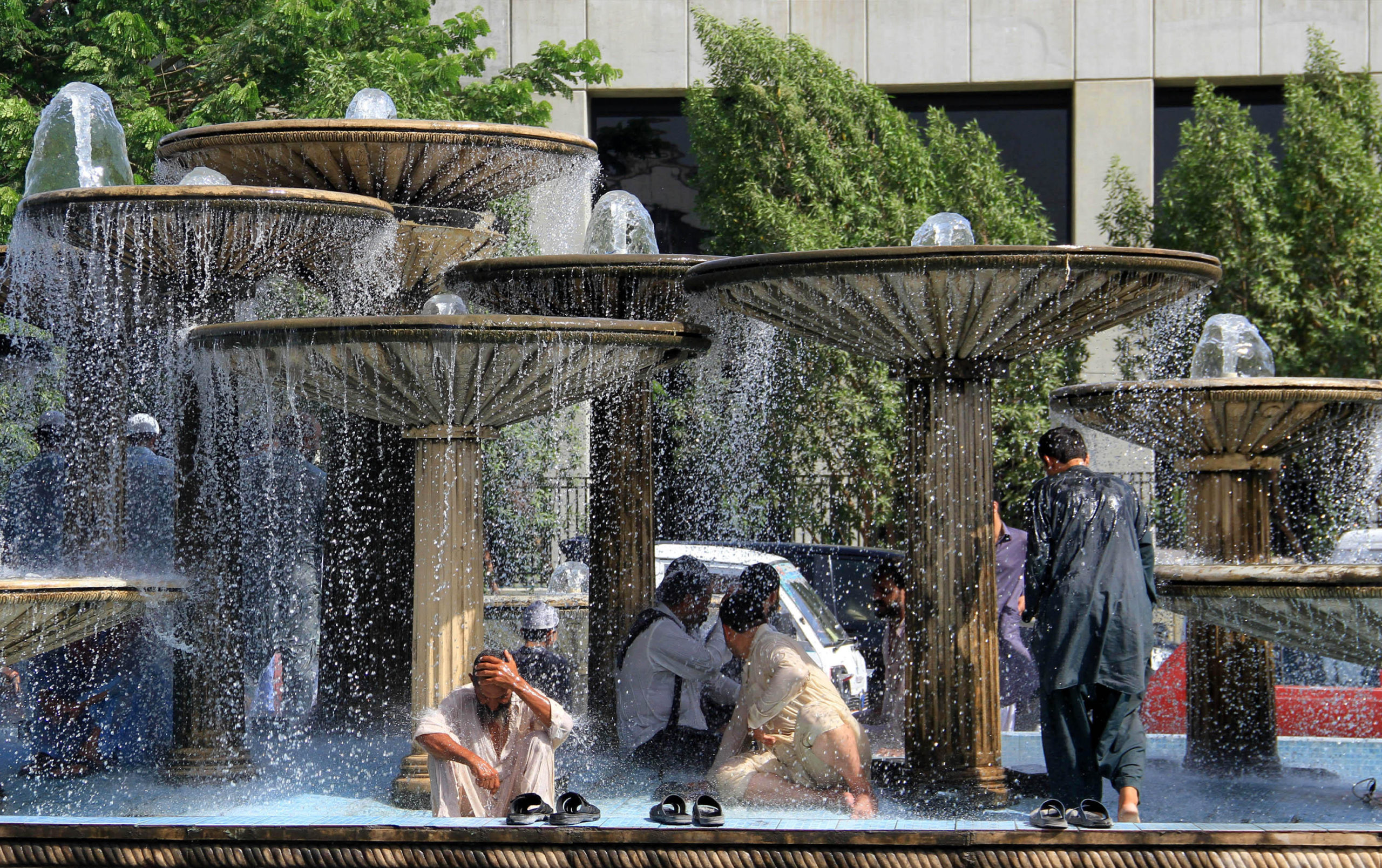 People cool off at a roadside fountain during a heatwave in Karachi, Pakistan, in May 2018 (Image: Alamy Live News)

In other words, rising temperatures could amplify poverty, worsen public health and lead to a severe decrease in standards of living in a region where 29% of the population – 216 million people – live in extreme poverty.

Rising levels of heat could also disproportionately impact women. A 2017 study by US think tank the Urban Institute found that stressors brought by climate change led to increased domestic abuse and sleep deprivation among impoverished women. It also found that women in Delhi and Islamabad spent an average of one more hour caring for family members per day if they reported that a family member had become sick from bad environmental conditions.

Energy policy consultant Nameerah Hameed advocates for a clean energy transition to reduce carbon dioxide emissions and limit the speed of climate change. A focus on gender equality, Hameed said, is crucial. “This includes involving women leaders in the decision-making process to ensure that the policy actions are sensitive to gender-specific needs, including access to clean cooking, disaster mitigation and risk management,” she said.

Adaptation is no longer a choice for us. It is inevitable

Fahad Saeed said it is possible to adapt to the more frequent and more severe heatwaves caused by climate change in South Asia. He suggested the use of artificial cooling systems in public spaces – such as places of worship, libraries and community centres – and the training of disaster-response teams who step in during a heatwave crisis.

However, poorly planned expansion of artificial cooling risks contributing to a negative cycle of rising temperatures and demand for cooling. Air conditioning uses large amounts of electricity, which may drive burning of fossil fuels, while many cooling technologies use gases such as hydrofluorocarbons (HFCs), which have a warming impact many times that of carbon dioxide. Investment in energy-efficient and HFC-free cooling technology is key to avoiding this.

Though India and Pakistan may not see eye-to-eye politically, climate change certainly does not distinguish between the two. “It is about time we mobilised the South Asian Association for Regional Cooperation (SAARC) for knowledge exchange,” Saeed said. “Adaptation is no longer a choice for us. It is inevitable.”

No respite from heatwave in Delhi's homeless shelters

A portrait of a Karachi slum during a heatwave