“I wouldn’t wish dengue on my enemies,” said Kiran Akif. News of a dengue outbreak earlier this month brought back memories of her illness from the potentially fatal, mosquito-borne disease in October last year. The 43-year-old administrator of a private school in Lahore, spoke with concern as she thought of the devastation dengue could wreak in parts of Pakistan that are still inundated with floodwater.

“The fact that thousands upon thousands of displaced people in our country are sleeping under the open sky, near huge swathes of stagnant water, is frightening,” Akif said.

The worst floods over a decade have displaced more than 33 million people in Pakistan since mid-June. Over 1,500 people have been killed and more than 12,800 injured, according to the National Disaster Management Authority.

The southern provinces of Sindh and Balochistan were the worst affected by flooding. Both experienced the wettest August on record, receiving seven and eight times their usual monthly rainfall, respectively; a study released last week said that climate change could have increased the most intense rainfall by 50%. 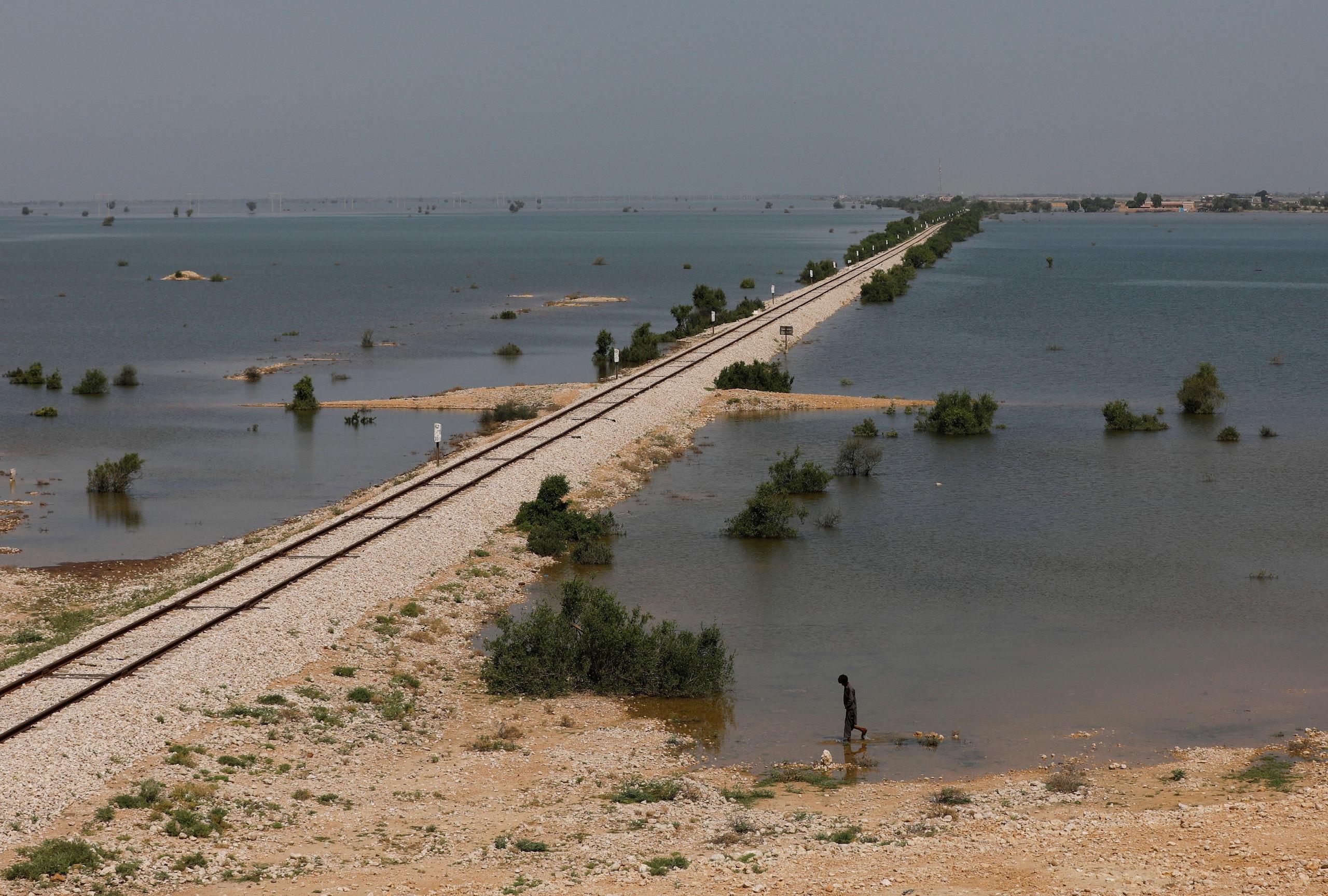 Standing water surrounds a railway line in Sindh, one of the worst-affected provinces by this year’s floods, on 6 September 2022 (Image: Akhtar Soomro / Alamy)

The deluge left behind large areas of standing water: in August, 37% of cropland in Sindh was inundated, according to the United Nations’ Food and Agriculture Organization. In Khyber Pakhtunkhwa, 16% of cropland was affected; 15% in Balochistan; and 9% in Punjab.

This standing floodwater provides a large area for mosquitoes to breed, leading to the spread of diseases like malaria and dengue.

Naseem Salahuddin, an infectious diseases specialist working at The Indus Hospital, a charitable hospital in Sindh’s capital, Karachi, said she was “overwhelmed” by the “sheer number of patients” coming to the hospital with dengue. “My colleagues at government facilities and even private ones are referring patients out as they don’t have enough beds,” she said. “Dengue seems to have replaced Covid-19.”

Symptoms rife, but tests and treatment in short supply

In most people, the dengue virus causes an acute flu-like illness, but it can develop into severe dengue with potentially lethal complications.

Salahuddin said she was especially worried about the over 650,000 pregnant women in flood-affected areas across Pakistan. About 73,000 of them are due to give birth in September, according to the United Nations Population Fund. “It’s going to be a losing battle,” she said. “Both mother and child may die if they remain undiagnosed [for dengue or malaria] and, therefore, untreated,” said Salahuddin, explaining that the diseases can cause women to miscarry or give birth prematurely.

Humaira Bachal, founder of Roshan Pakistan Academy, a charity that provides education and healthcare, has been providing frontline relief since the floods began. She said she and her team had “confirmed dengue cases” after testing displaced people in a camp on the outskirts of Karachi.

Dengue seems to have replaced Covid-19

But, she added, in rural areas, especially in Sindh, children have skin infections so bad that the skin is “peeling off” on their heads and feet, and “gastroenteritis is causing deaths”. The scale of these multiple healthcare crises means health workers have neither the time nor the means to check people for dengue.

“We just give them basic treatment to save their lives,” said Bachal.

Fever is common among those affected by the floods, Bachal said, but there is no way to confirm if people have dengue. The organisations Bachal has come across have not had dengue test kits.

In early September, Zunera Zulfiqar, a paediatrician at the Sindh Institute of Urology and Transplantation (SIUT) was working at SIUT’s medical camp for flood victims in the coastal district of Lasbela, Balochistan (near Karachi). While she said she did see dengue test kits being used, “There were too many patients with clear symptoms of dengue, also called ‘breakbone fever’, as it presents as typical severe body ache, headaches, fever and vomiting. Symptoms of malaria are not exactly the same.”

Now, the paediatrician is back working on the wards of SIUT, which she said are inundated with dengue patients.

Proportion of patients in one Karachi hospital who may have dengue, according to one doctor’s estimate

“Of every 20 of our admitted patients, approximately six to eight are testing positive for dengue; we are predominantly a nephrology-related hospital so these are patients whose kidneys have been affected by dengue,” said Zulfiqar, adding that at Civil Hospital Karachi the numbers might be as high as 15 out of every 20 patients.

Dengue cases are also on the rise in Khyber Pakhtunkhwa, a government flood report released on 17 September revealed. The Third Pole asked officials about the situation in Balochistan but had not heard back at the time of publication.

Although dengue is common across Pakistan after the monsoon rains, health experts said the Pakistani government seems to be taken by surprise every year.

“They are never prepared and turn to fire-fighting when things get out of control,” said Qaisar Sajjad, secretary-general of the Pakistan Medical Association.

“Dengue was mostly being reported from Karachi, some from Hyderabad and a handful from Sukkur,” said Bahoto, adding that the provincial disease surveillance response unit was vigilant and only cases of malaria rather than dengue were being reported among displaced people.

Bahoto stated that the mosquito species that spread dengue breed in stagnant water that typically accumulates in pots or abandoned tyres, not in large bodies of floodwater.

Dengue has no treatment, except symptomatic treatment

Zunera Zulfiqar, paediatrician at Sindh Institute of Urology and Transplantation

Zulfiqar agreed that the number of reported malaria cases is high but pointed out that there are at least antimalarial medicines. “Dengue has no treatment as such, except symptomatic treatment like hydration, fever control and helping patients survive if [blood] platelets drop or organs are affected.”

Bachal, the frontline health worker, described the severity of the situation in Sindh: “If you put up a mosquito net at night in any flood-affected area, by morning you will see the net covered with mosquitoes.” Due to a scarcity of nets, she said, many people use them to protect their livestock that survived the floods and instead cover themselves with cloth. 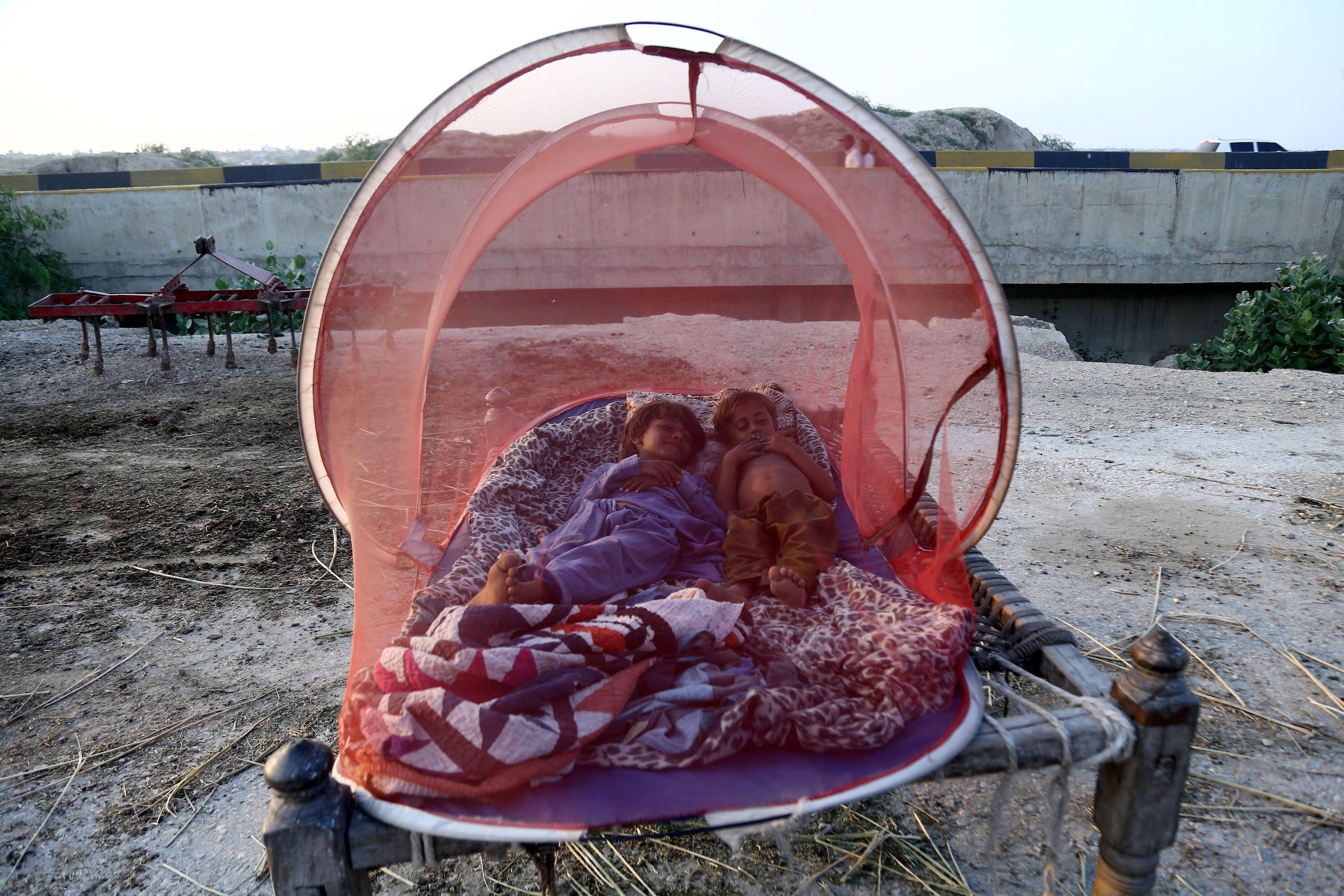 Abdul Ghafoor Shoro, general secretary of the PMA’s Karachi division, said the PMA’s teams found people sleeping in the open in flood-affected areas, without mosquito nets. “The government has received thousands of them [nets] in aid; where are they?”

In the absence of testing kits, Bahoto of Health Services Sindh insisted that healthcare workers “can make a fairly good diagnosis based on the history from patients” and that most often people are not suffering from dengue. Last week, the World Health Organization handed over 42,000 and 13,500 rapid diagnostic kits for dengue and malaria respectively. Now, Bahoto assured The Third Pole, the testing can be done accurately.

Shoro remained unconvinced, and said he saw “little seriousness” in the handling of the disease. “It [the government] uses fancy words but there is little action on ground.”

As of 21 September, 27 deaths due to dengue in Sindh have been officially reported. Independent health experts told newspaper Dawn that the real numbers are likely much higher, given the lack of testing in flood-affected areas.

More than a thousand kilometres to the north of Karachi in Islamabad, two species of dengue-spreading mosquitoes – Aedes aegypti and Aedes albopictus – have long been found in abundance, said Ijaz Ali, a virologist at the bioscience department at Comsats University in Islamabad. But a third, Aedes vitatus, was reported there “for the first time this year, which has not been reported from any part of Pakistan,” he said.

The impact of climate change in Pakistan is leading to an “increase in temperature and humidity in summer and decrease in harsher winter days” said Erum Khan, chair of the Department of Pathology and Laboratory Medicine at Karachi’s Aga Khan University Hospital. These are conditions in which vectors of disease, such as mosquitoes, thrive. 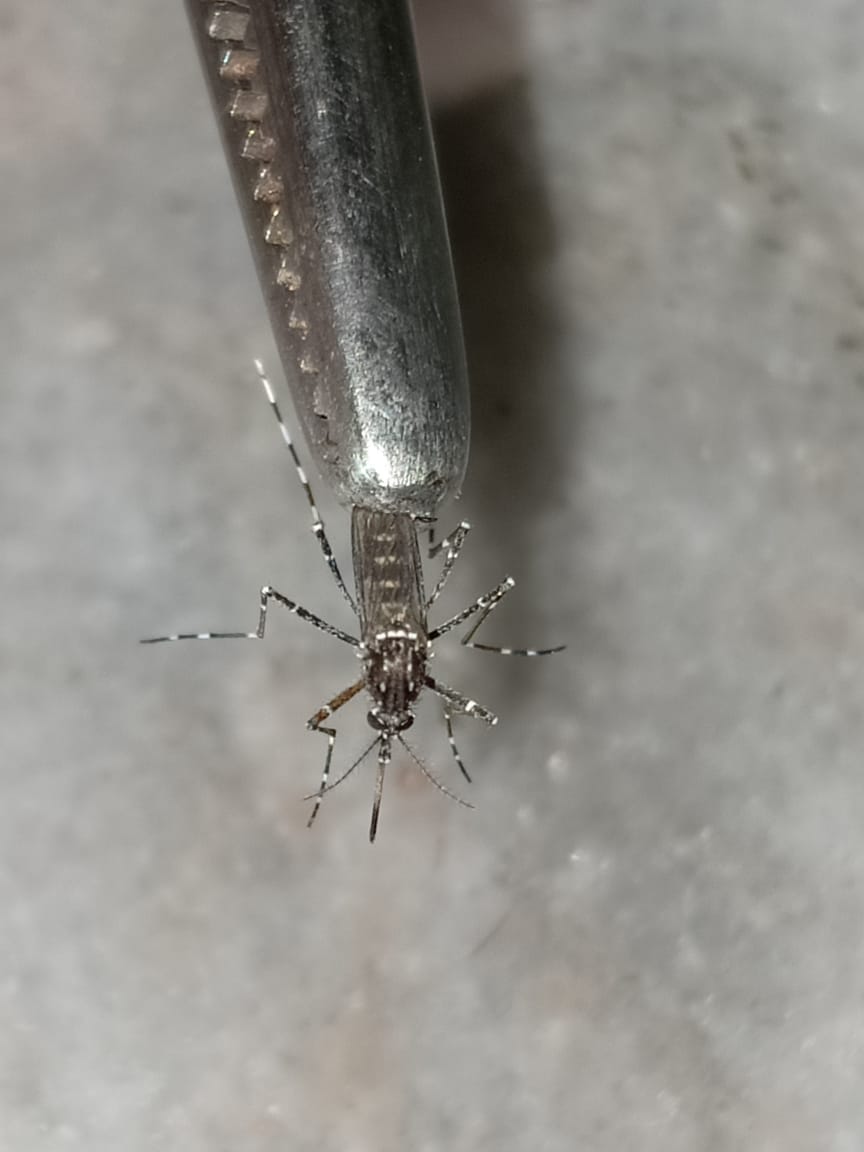 Aedes vitatus mosquito found hatching in Islamabad by Comsats University researchers. This year is the first time this dengue-spreading species has been reported in the city. (Image: Ijaz Ali) 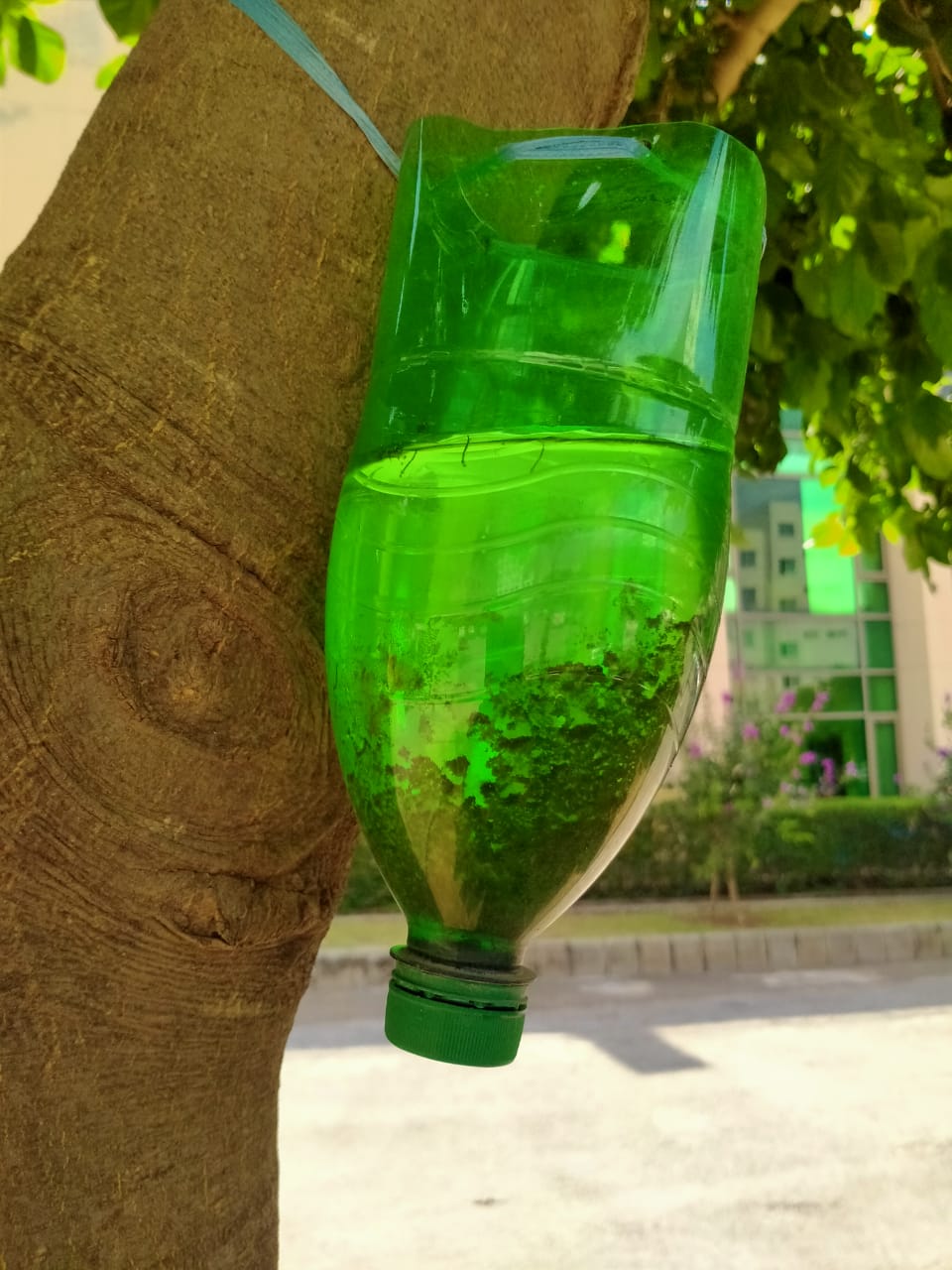 Ali said to stop the outbreak authorities need to “break the cycle at the early stage by regularly doing larvicidal activity over a couple of days”.

With such a huge area of standing water available for mosquitoes to breed this year, the quickest option is aerial spraying, as has been done in response to locust swarms in recent years, Shoro suggested.

“Or infest the lakes with larvae-eating fish, as is done in countries like Malaysia and Singapore,” said Khan.

Zulfiqar warned that this year’s outbreak could be lethal. Aside from immediate spraying, she said, “the government needs to start awareness campaigns and regulate prices of and ensure availability of mosquito nets, mosquito repellents and life-saving medicines”.

What melting Tibetan glaciers reveal about disease and global warming