Cyclone Yaas slammed into the northern coast of the Bay of Bengal at the same time as high tide on 26 May. It made landfall at the border of Odisha and West Bengal. But about 200 kilometres further east, in the low-lying areas of the Sundarbans, the waves breached embankments at about 200 places. Saltwater ruined farms and freshwater ponds, and flattened mud huts. Now the demand for stronger, all-concrete embankments to protect residents has resurfaced.

The demand was first raised in 2009, after Cyclone Aila damaged or destroyed nearly a quarter of the 3,500 km of mud-based embankments in the Sundarbans, the world’s largest mangrove forest that straddles India and Bangladesh. Around 4.5 million people live in the Indian part of the Sundarbans, mostly on islands that dot the Ganga delta. Embankments are their only protection against saltwater engulfing their farms, ponds and homes every high tide.

Cyclones have been common in the Bay of Bengal for centuries, but they are getting more severe because the sea surface is warmer, leading to more evaporation and stronger winds. A recent World Bank report pointed out that the long-term trend of cyclone landfalls, between 1877 and 2016, shows northern Odisha and the Sundarbans are the highest-impact zones.

OP Singh, former deputy director-general of the India Meteorological Department, has forecast “an increase in the frequency of post-monsoon cyclonic disturbances in the Bay of Bengal by 50% by the period 2041-2060 as a result of increased greenhouse gas emissions”.

“Compound event, an event where several factors are adding up to maximise damage, is happening in the Sundarbans area,” Roxy Mathew Koll, a climate scientist at the Indian Institute of Tropical Meteorology, told The Third Pole. “Cyclones are working in tandem with other climate change-triggered phenomena like intense rainfall and sea level rise.”

“High tide, a natural phenomenon, is often overlapping with climate change-triggered events to maximise the impact as happened in the case of Yaas. Of late, cyclones have been intensifying rapidly, making the situation more difficult,” Koll added.

In a December 2020 study, the Council on Energy, Environment and Water – a think-tank – identified the areas in and around the Sundarbans as an “extreme climate hotspot” due to cyclone impacts. 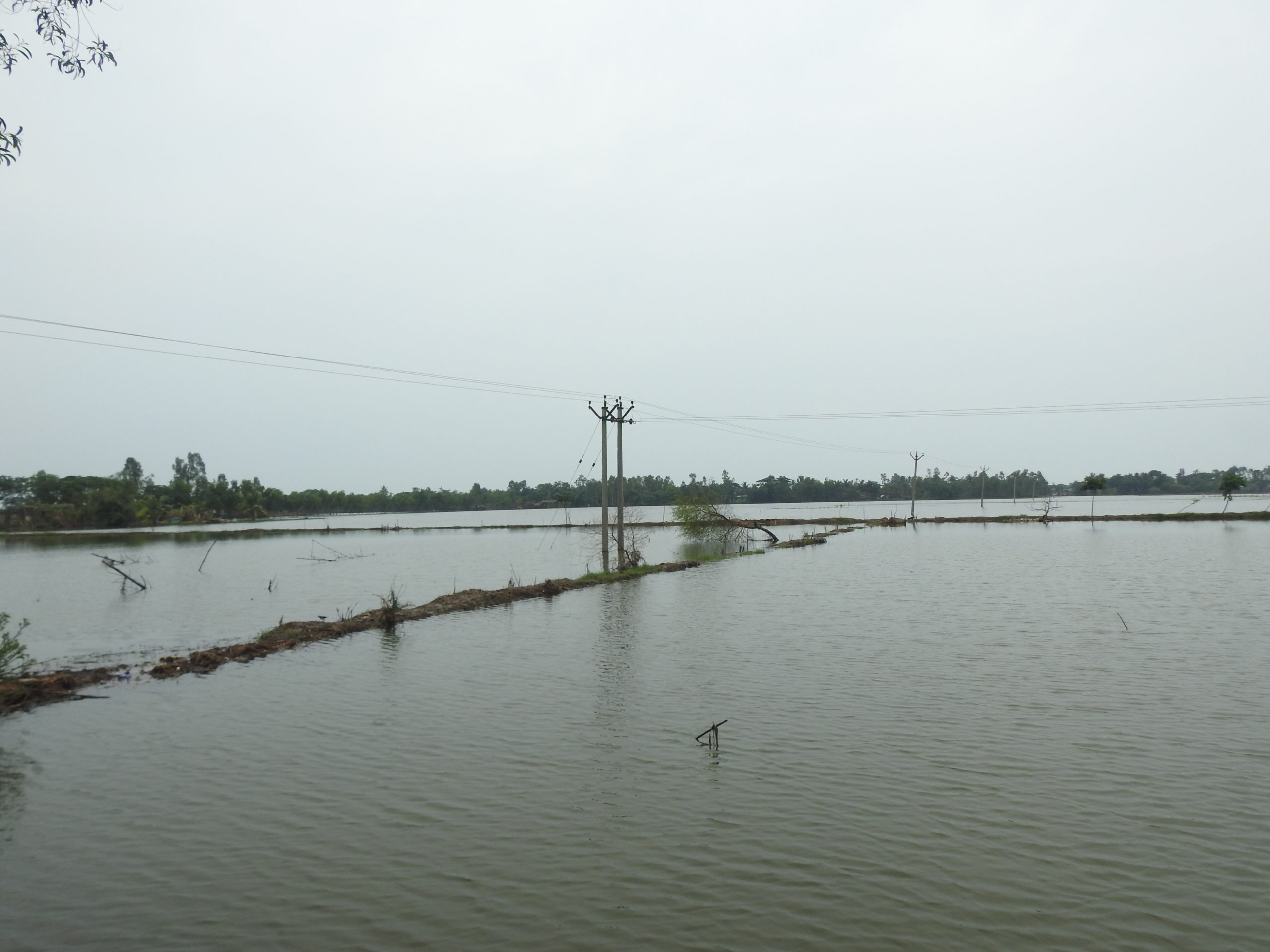 Much of Kumirmari island in the Sundarbans remains submerged by saltwater even a month after Cyclone Yaas (Image: Medha Basu)

Javed Khan, West Bengal’s minister for disaster management, said that 1.5 million people were evacuated before Cyclone Yaas. Nevertheless, he agreed that livelihoods had been badly hit. This has come on top of farms and freshwater ponds being flooded with saltwater during Cyclone Amphan in 2020.

West Bengal’s initial report to the central government says around 20 million people were affected by Yaas and 300,000 homes damaged. The state government has assessed the damage at 200 billion Indian rupees (USD 2.69 billion).

According to state government sources, embankments have been breached at about 300 places in West Bengal due to Yaas, including around 200 points in the Sundarbans. 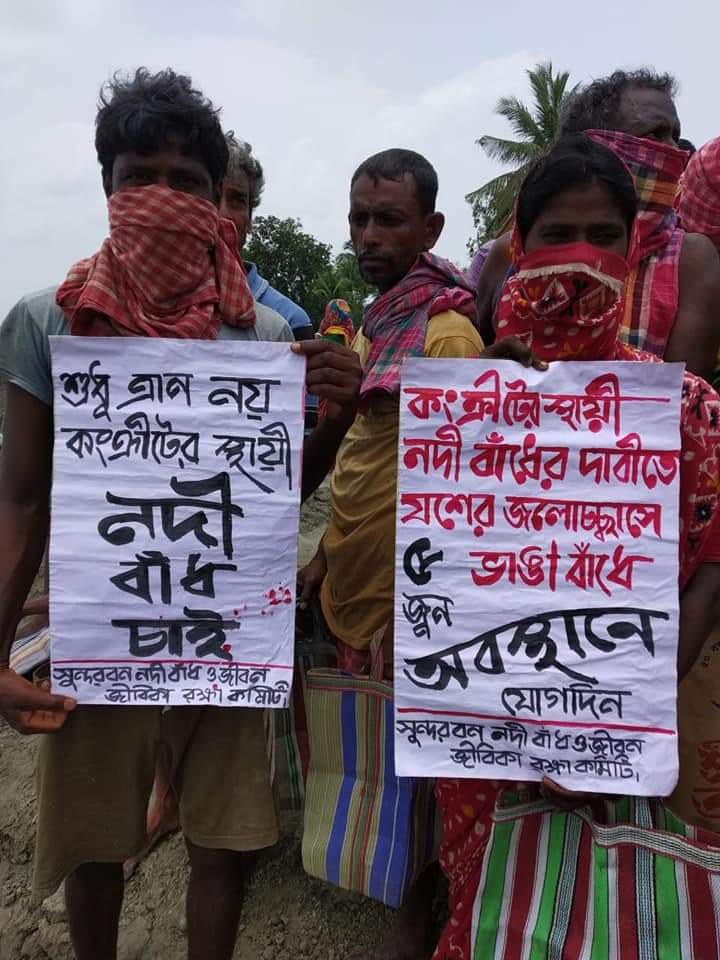 “In recent time one cyclone after another, be it Bulbul, Amphan or now Yaas, have led to repeated breaching of the embankments, leading to the large-scale damage of homes and flooding of agricultural fields turning them unproductive; and hence the demand for concrete embankment has come up,” said Suvendu Manna, a resident of highly impacted Mousuni island and a frontline member of Sundarban Nodi Bandh o jibon jibikarokkha committee (Sundarbans river embankment and saving life-livelihood committee).

However, Kalyan Rudra, a river expert and chairman of the West Bengal Pollution Control Board, said: “Considering strong tidal fluctuations and soft nature of clay in the area, building fully concrete embankments is not advisable.” Rudra was recently appointed by the state government as chair of an expert committee mandated to prescribe how the embankments can be protected by planting trees around them.

Bureaucrats, residents and independent experts agree that embankments built after Cyclone Aila withstood the wind and the waves during Amphan and then Yaas. These embankments have compacted mud at the core, covered with brick or concrete. They rise from the riverbanks with a gentler slope than embankments built earlier.

“According to information being received, post-Aila embankments in all the highly affected blocks [areas] like Sagar, Pathar Pratima, Namkhana, Gosaba and others have not been breached,” said Subhas Acharya, an expert who used to work in the state government’s Department of Sundarban Affairs.

“Though Pathar Pratima had about 38 breaches in embankments spread over 62 km, none of the 22 stretches of embankment built after Aila were affected,” said resident Kalipada Jana. Residents of Gosaba and Namkhana – other areas in the Sundarbans – had a similar experience.

Politics gets in the way of construction

Subhas Naskar was the minister in charge of irrigation when Aila struck in 2009. He admitted that politics came in the way of rebuilding embankments after the cyclone. “Post-Aila, the then-union government, heeding the suggestion of an expert committee set up by Prime Minister Manmohan Singh, sanctioned INR 50.32 billion (USD  677 million) to build 778 km of new embankments in highly affected areas. However only 80-odd km could be built over the years, mainly due to political positioning and administrative inefficiency. About 80% of the money sanctioned had to be sent back.”

In the crowded islands dotting the Sundarbans, building an embankment requires acquiring someone’s land, and land acquisition is a political hot potato in West Bengal. Despite this, Naskar said, residents were willing to part with their land in return for compensation; a third of the required area was acquired, but most of it was not used.

Rajib Banerjee was a successor to Naskar as irrigation minister, but from a different party. Banerjee said: “I tried my best to quicken the process of building Aila embankments during my tenure, but nothing happened once I was shifted.” 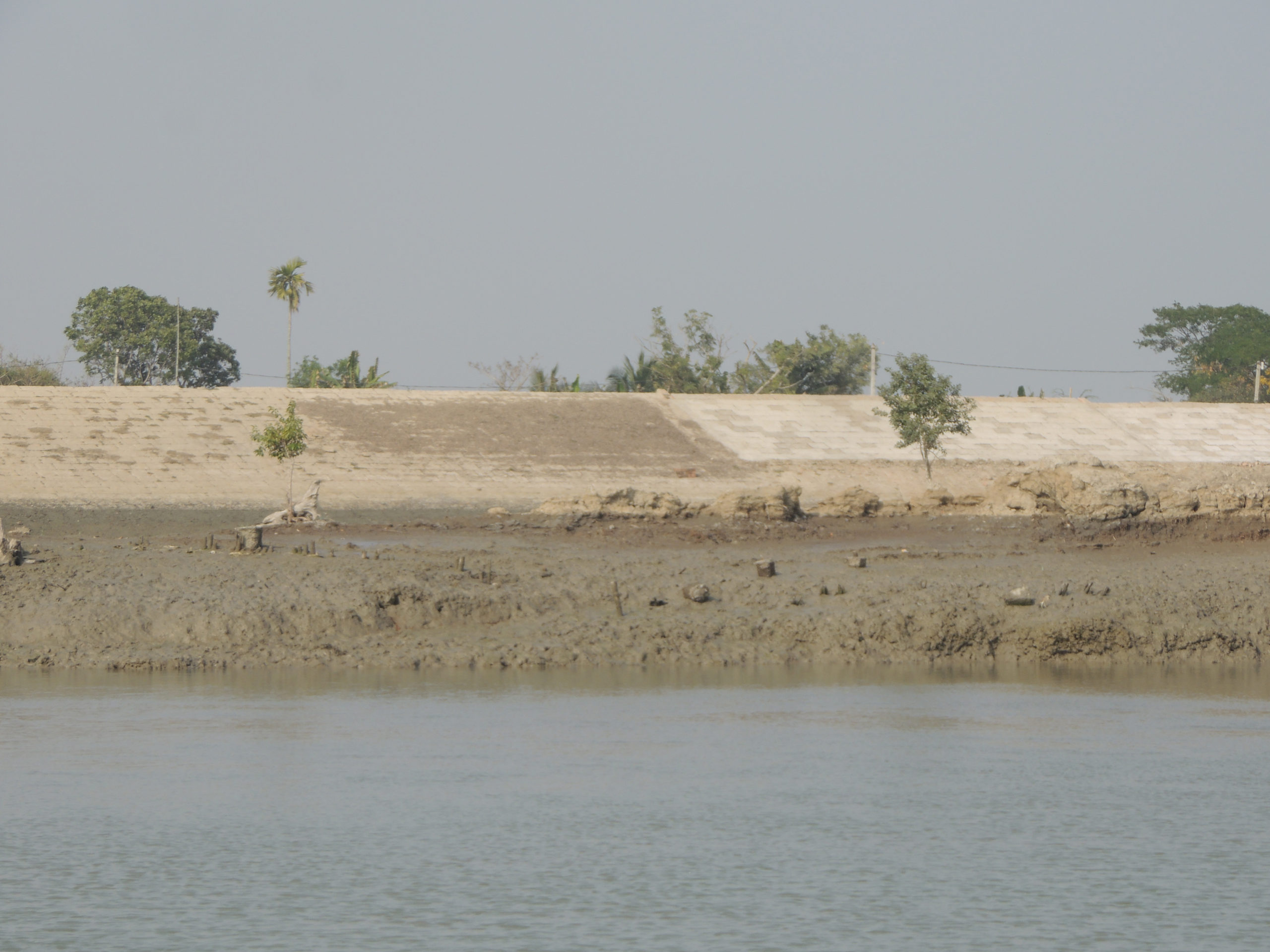 One of the embankments built in the Sundarbans after the 2009 Cyclone Aila (Image: Jayanta Basu)

Experts working in the Sundarbans say the immediate need is to build embankments in the post-Aila model, rather than go for the expensive all-concrete option or undertake detailed studies.

“An extremely vulnerable island like Mousuni has 19 km out of its 32-km-long river and seafront exposed as the embankment is either weak or missing. Do we need a long-term study to build that embankment?” asked an expert.

However Rudra, from the West Bengal Pollution Control Board, told The Third Pole: “We require a detailed topographic study to find out whether we can give back some space to the river and allow regulated spill of sediments in the intertidal area. I know it’s difficult, considering the limited availability of land. But unless it is done the riverbed will come up gradually, and in conjunction with climate change impact, will trigger more intense water surges that will spill over the embankments.” Rudra was recommending that some space be left between the riverbank and the embankment.

Sugata Hazra, head of the School of Oceanographic Studies at Kolkata’s Jadavpur University, said: “We need to know why 63 out of around 1,000 villages in the Sundarbans are getting affected repeatedly. We need to find a solution for their safety.” He recommended putting up offshore wind breakers in some parts of western Sundarbans where the impact of cyclones is most pronounced.

“Along with strengthening the existing embankment, at least one room in a house needs to be built on a higher plinth to counter flooding and needs to have a concrete roof so that during a disaster the entire family can take shelter there,” suggested Anurag Danda, a Sundarbans expert.

In the wake of Cyclone Yaas, the chief minister of West Bengal Mamata Banerjee has promised to plant 200 million mangroves in the next two years to tame the waves.

Reacting to this, environmentalist Subhas Datta said: “Mangroves are being continually mauled mercilessly to build illegal hotels and resorts in the Sundarbans, and hardly any action is taken.” Saying that the government should walk the talk, Datta alleged that prawn farmers who need brackish water damage embankments in the dead of night. 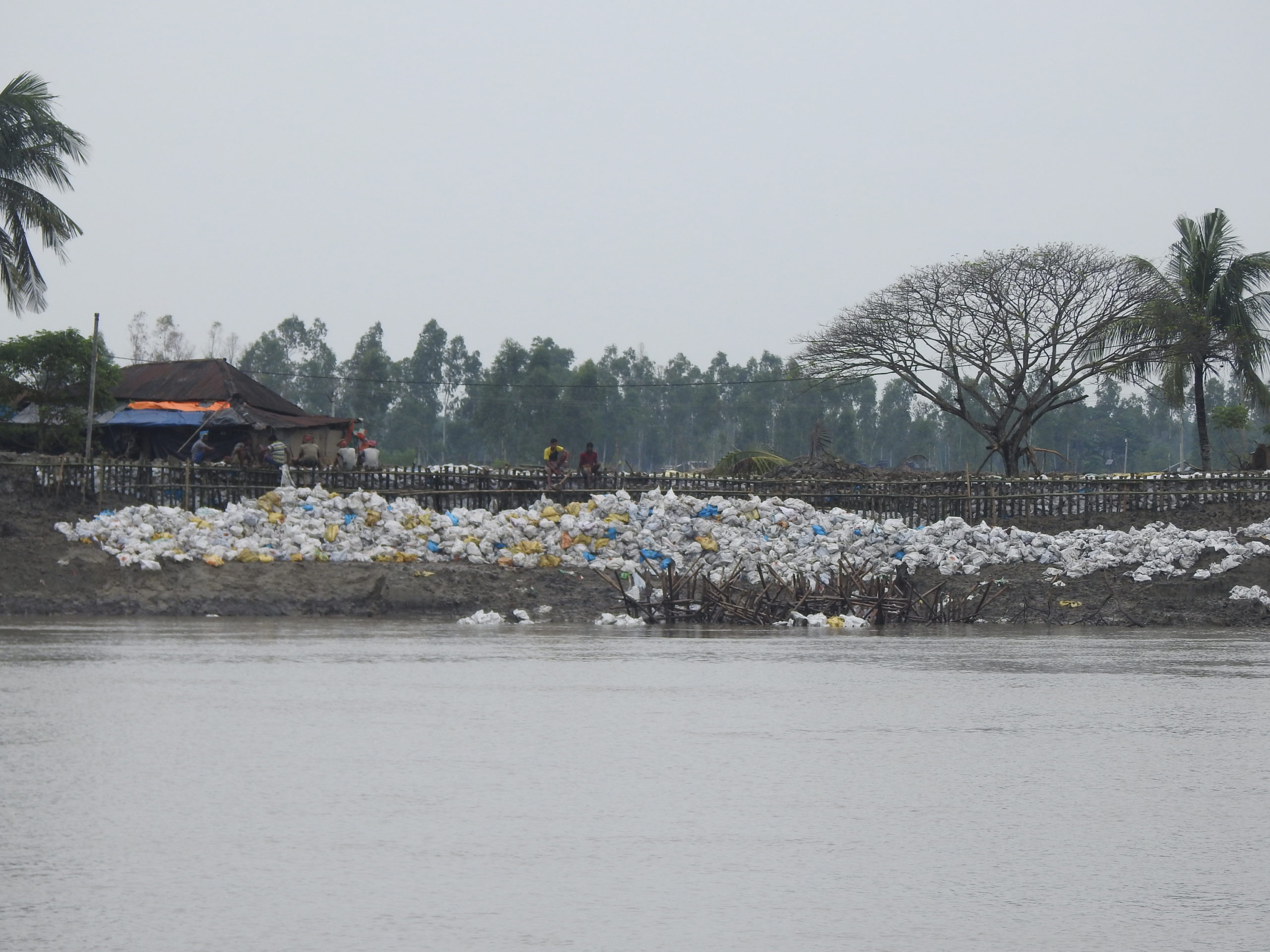 As saltwater forced inland by Cyclone Yaas threatens a village in the Sundarbans, residents desperately pile sandbags to shore up the embankment and protect their farms (Image: Medha Basu)

Debate over retreat from the Sundarbans

Anurag Danda and Nilanjan Ghosh of think-tank the Observer Research Foundation, and a few other experts say that despite all efforts, around a third of the 4.5 million people who live in the Indian part of the Sundarbans already find the area unliveable and will have to be resettled away from the coast. Maintaining embankments in the areas closest to the sea is becoming more challenging and expensive, they point out.

Other experts, politicians and residents contest the idea.

“It’s not a practical solution,” a senior politician said. “In such a densely populated state as West Bengal, it is impossible to resettle so many people. Definitely some people will have to be shifted from extremely vulnerable areas like Ghoramara or Mousuni, and we have shifted some families during Yaas. But overall, we have to build resilience in the Sundarbans.”

A town planner added: “If you shift so many people, they will lose their livelihoods and end up in urban slums.”

Keeping the sea at bay