As the number of Rohingya people with the Covid-19 virus rises, Bangladesh is looking at a potentially explosive situation. As of June 10, 2020, three Rohingya refugees had died during the pandemic. The first victim was 71 years old, the second 58 and the third 70; all were residents of the sprawling Kutupalong refugee camp for those who fled Myanmar.

Of those tested in the camps near the Bangladesh-Myanmar border, 35 Rohingya people were found to be infected. A further 850 residents who had come into contact with the infected are now in quarantine. The only good news is that 618 Rohingya have completed their quarantine without contracting the disease. As of now 3,600 families, 16,000 people, are in lockdown, according to Abu Toha MRH Bhuiyan, health coordinator at the Refugee, Relief and Rehabilitation Commission.

But this is a small portion of the nearly one million Rohingya refugees in Bangladesh. Over 700,000 fled Myanmar in August 2017, and more continue to arrive. On May 30 28 Rohingya were rescued from two boats off the coast of Teknaf in the Cox’s Bazar region.

The number of tests is low for this large number. Internet restrictions make it harder to spread messages about face masks and handwashing. Rumours worsen the situation.

“The health and wellbeing of Rohingya refugees and the local Bangladeshis remain our top priority. From early May, roughly 10 samples were collected per day from the Rohingya to test for coronavirus. So far nearly 400 tests have taken place. We are working with the World Health Organization and the authorities to increase the testing capacity from 200 to 500 samples per day in Cox’s Bazar district,” said Charlie Goodlake, the spokesperson for the United Nations High Commissioner for Refugees (UNHCR) in Dhaka, the capital of Bangladesh.

There is only one laboratory in Cox’s Bazar district that can do Covid-19 tests. It has a capacity of 200 tests per day, and that has to serve local residents as well as the refugees.

Regardless of symptoms, suspected cases are now being isolated from the community as home quarantine is not an option in the densely populated camps. As for those tested, if they are found to be infected, rapid investigation teams work to track down contacts and transfer them to the isolation centre or treatment centre.

The numbers have not been as high as originally feared. Johns Hopkins University’s modelling analysis in March had predicted that in the first 30 days a single case in Rohingya camp would lead to an estimated 119-504 infections. 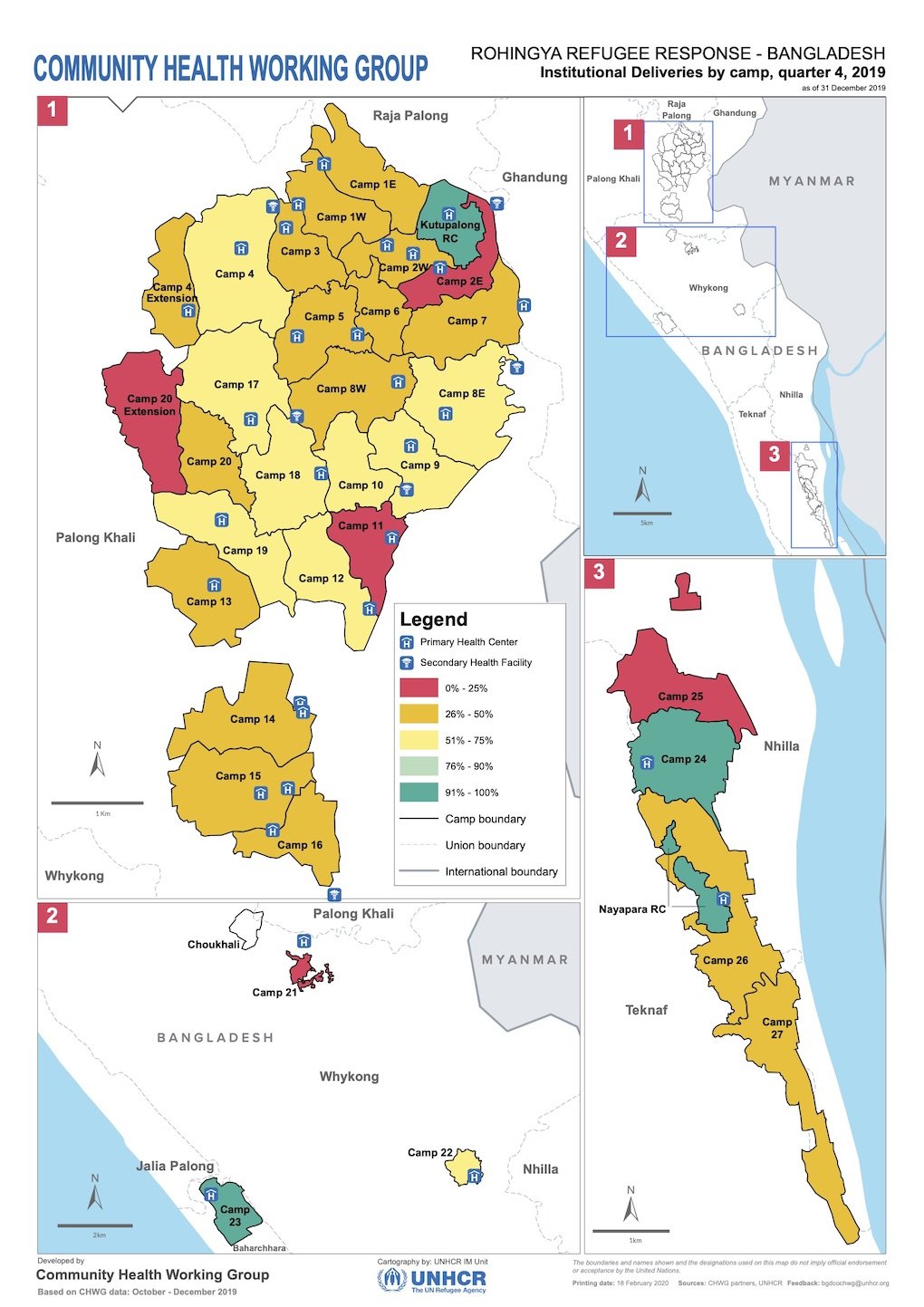 The fear is that, because of limited testing capacity, there may be many more undetected cases in the camps.

“Humanitarian professionals are working relentlessly to fight the Covid-19 situation in the refugee camps and so is the Bangladesh government. But the capacity of testing must increase. Otherwise the situation will get worse before it gets better,” said Pradip Kumar Sen Gupta, the head of the department of epidemiology at the Bangladesh University of Health Sciences in Dhaka.

Mohammad Nurul, a Rohingya refugee and now a tea stall owner at the Leda camp near Teknaf, hears most of the rumours. “Rumours are spreading in the camps that in the name of Covid-19 Rohingya people are being abducted and killed inside hospitals,” he said. “They also fear going into isolation for the same reason. So, patients with symptoms are avoiding getting tested. It has, of course, no reality. But many are trying to hide their Covid-19 symptoms.”

International agencies and the Bangladesh government are working hard to portray the real scenario to the community, said a field-level health worker who spoke on the condition of anonymity. “There were incidents where patients attempted to escape from Kutupalong camp with coronavirus symptoms.”

It is a very unsettling time in the Rohingya camps, more so because of restrictions in communications. Citing security issues, in September 2019 the Bangladesh Telecommunication Regulatory Commission directed all operators to shut down 3G and 4G internet services in the camps. Lack of access to social media is hampering the ability of the government and health workers to combat false rumours.

As a result, although leaving home and coming into close contact with people are considered risky, many Rohingya continued to go out of the camps.

Read: Between trauma and disease: Covid-19 in the Rohingya camps

Asked why the refugees were hiding Covid-19 symptoms, Farzana Sultana Nila, a clinical psychologist at the Centre of Mental Health and Care, Bangladesh, said, “Such [responses are] common when there is less access to information and education.”

On top of this, only a few areas in the camps are still under lockdown. There is free movement in most areas because there are no suspected patients there. “In my zone, there were five patients only. Three of them have recovered and two are under observation. As there is no new patient from these areas, lockdown has been withdrawn,” said Mahfuzur Rahman, in charge of four zones in the Kutupalong camp.

Law enforcement agencies are trying to control interactions between the refugees and people those outside camps, but it is not easy to do when people are not aware of the risks, Rahman said.

“Misinformation and rumours exist in the camp, as they do everywhere,” said Charlie Goodlake from the UNHCR. “We are working with the Bangladesh government and the Rohingya to bridge the communication gap and provide accurate and timely information to them, so they can protect and prepare themselves. We have also repeatedly asked the government to lift the ban on internet inside the camps, so refugees can have better access to information. We are also working to increase the capacity of Covid-19 treatment centres in the camps to protect refugees and Bangladeshis living in close proximity. Preparation has been made for 900 more beds. Already 200 beds are available. Cox’s Bazar Sadar Hospital has also been equipped with 10 ICU and eight high dependency beds which are in operation.”

The movement of personnel from international agencies has been restricted to prevent Covid-19 transmission. Most agencies are relying on volunteers to raise awareness and spread important information; 3,000 volunteers from Rohingya refugees and the Bangladeshi host community have been trained so that they can communicate with the camp’s residents to spread awareness of Covid-19.

Abu Bokkor, who owns a pharmacy in Balukhali, Cox’s Bazar, said, “Many Rohingya men from nearby camps come to my shop for medicines. I try to explain to them about Covid-19, social distancing and personal hygiene. The young generation is aware of the grave situation of the pandemic, but most elderly men do not consider the risk of Covid-19 and [the point of] using masks [in the] summer.”

Despite the low number of infections detected, the situation in the camps seems dangerous. People are gathering in markets, many are not using masks, some are hiding their symptoms and rumours are adding fuel to the flames. The monsoon rains have started and there is the risk of landslides at the slopes of the Chittagong Hill Tracts where the camps are located. If that happens, the pandemic will make rescue operations very difficult. Unfortunately, one key step that could help relieve some of the stress – the removal of communications restrictions – is something the government is unwilling to do, making everything that much harder.

A cartoonist captures the biodiversity of Assam