The world is nowhere near what is needed to combat climate change effectively, the United Nations has reported on the basis of new pledges made by the European Union (EU) and 47 other countries to control greenhouse gas (GHG) emissions.

The new pledges do not include the world’s top two GHG polluters, China and the US. Nor does it include India, the fourth largest polluter after the EU.

“The science is clear. To limit global temperature rise to 1.5 degrees Celsius, we must cut global emissions by 45% by 2030 from 2010 levels. Today’s interim report from the UNFCCC (UN Framework Convention on Climate Change) is a red alert for our planet,” said UN secretary-general António Guterres. “It shows governments are nowhere close to the level of ambition needed to limit climate change to 1.5 degrees and meet the goals of the Paris Agreement.”

“The major emitters must step up with much more ambitious emissions reductions targets for 2030 in their Nationally Determined Contributions well before the November UN Climate Conference in Glasgow,” he said.

The pledges – called Nationally Determined Contributions or NDCs – were made before the 2015 UN climate summit in Paris and have been updated now by the EU and the 47 countries that together accounted for 28.8% of the global GHG emissions in 2017. 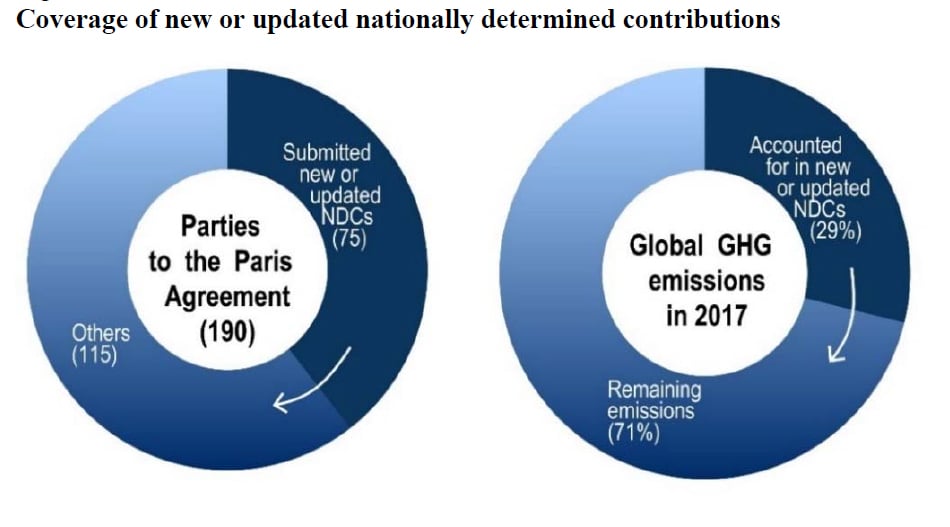 The updated pledges show total GHG emission levels resulting from implementation of the updated NDCs will be only 0.3% lower than the original NDCs by 2025 and 2.8% lower in 2030.

This, when the Intergovernmental Panel on Climate Change (IPCC) has said carbon dioxide emissions need to decline by about 45% from the 2010 level by 2030 to reach the Paris Agreement’s aspirational goal of keeping average global temperature rise within 1.5 degrees Celsius above the pre-industrial level.

The world is already 1.2 degrees warmer than in those days.

Carbon dioxide accounts for the overwhelming majority of GHGs that are accumulating in the atmosphere and causing climate change.

Developed countries are now talking about “net-zero” carbon emissions by 2050, which India and some other countries see as an attempt to postpone action. India’s Prime Minister Narendra Modi and Environment Minister Prakash Javadekar have been repeatedly stressing the need for rich nations to control their GHG emissions right now.

“Long-term commitments must be matched by immediate actions to launch the decade of transformation that people and planet so desperately need,” Guterres said at the release of this latest UN report.

“This report shows that current levels of climate ambition are very far from putting us on a pathway that will meet our Paris Agreement goals,” said Patricia Espinosa, executive secretary of UNFCCC.

She clarified that the current report is a “snapshot, not a full picture” of the NDCs, as the Covid-19 pandemic had posed significant challenges for many nations in updating their pledges by the deadline of December 31, 2020. A second report will be released before the next UN climate summit in November scheduled to be held in Glasgow in the UK. 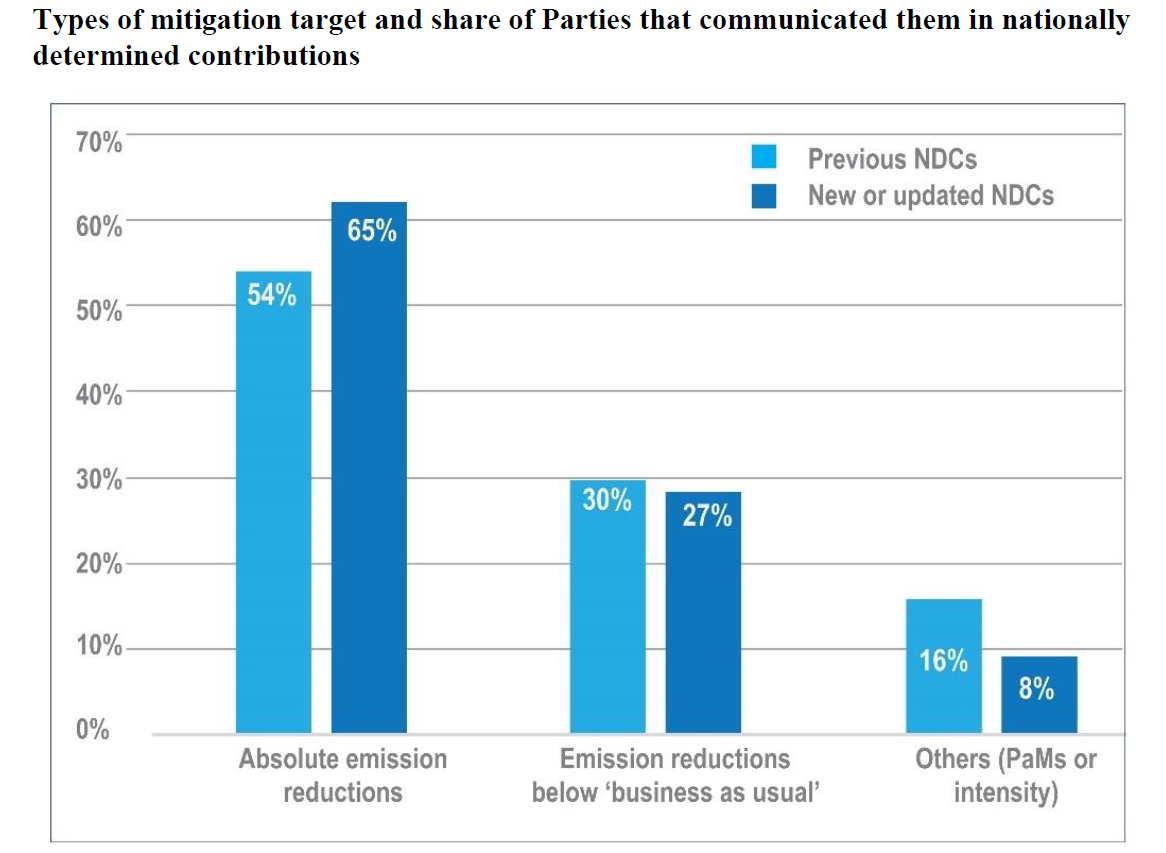 Espinosa pointed out that all countries now had an “unprecedented opportunity” for green recovery from the economic impacts of Covid-19. “This is a rare moment that cannot be lost. As we rebuild, we cannot revert to the old normal. The NDCs must reflect this reality and major emitters, especially G20 nations, must lead the way.”

“This report should serve as an urgent call to action, and I am asking all countries, particularly major emitters, to submit ambitious 2030 emission reduction targets,” said Alok Sharma, president of the Glasgow summit. “We must recognise that the window for action to safeguard our planet is closing fast.”

While rich nations remain focussed on mitigation of GHG emissions, the new pledges showed again that most developing countries recognise adaptation to climate change impacts as their immediate priority. 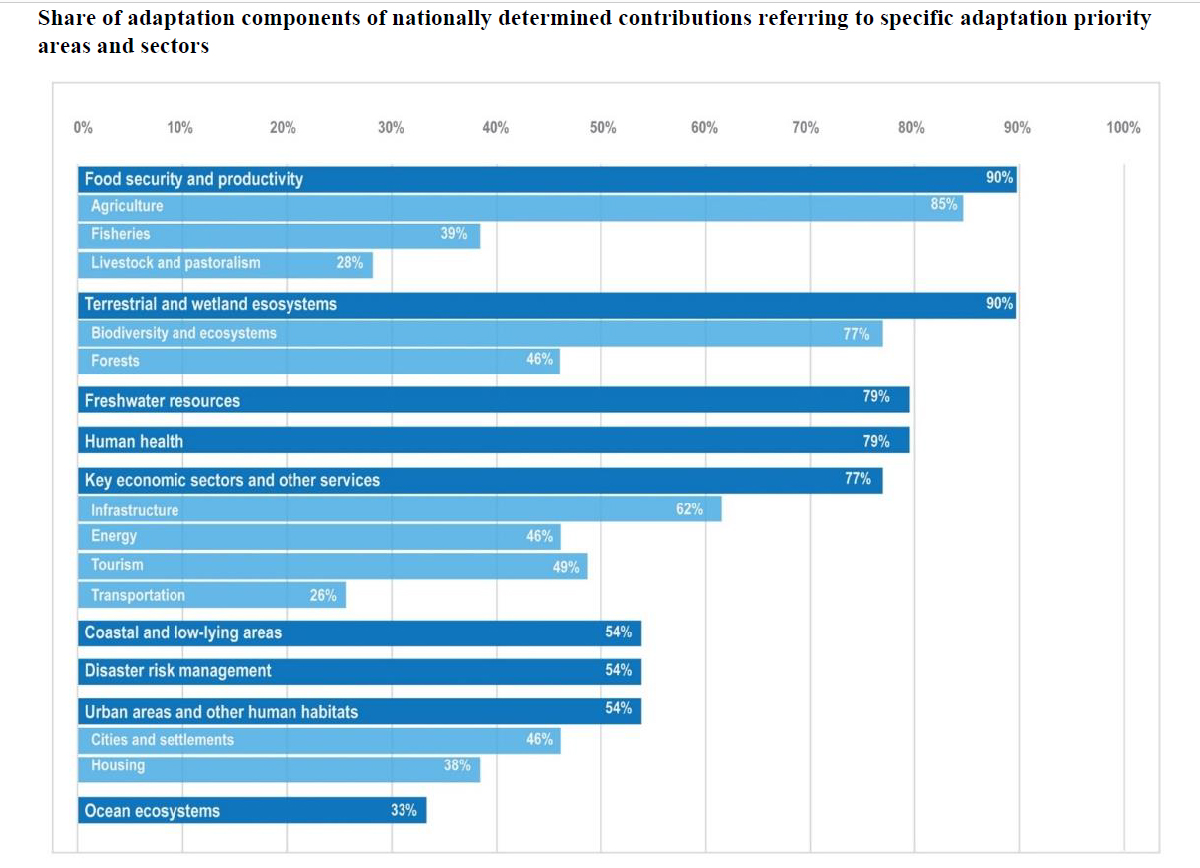 They also reiterated the need for financial support, technology transfer and capacity building help from other nations to deal with the climate crisis that is already here.

The Alliance of Small Island States (AOSIS) said, “This report confirms the shocking lack of urgency, and genuine action… Country commitments are simply not good enough.”

“It is deeply concerning to see that the world is still far from the path we need to avoid the worst impacts of climate change,” said Sonam P. Wangdi of Bhutan, chair of the Least Developed Countries Group in UN climate negotiations. “More countries need to submit new or updated plans this year, and major emitters must lead the way with this. These plans must contain increased ambition in their 2025 or 2030 targets.”

“Failure to act now on climate change will lead to more catastrophic impacts, with far greater costs,” Wangdi said, “all of which will be felt most acutely by Least Developed Countries. The climate crisis is here, and it demands a bold global response now.”

Helen Mountford, vice president, climate and economics at the World Resources Institute, said, “It is imperative that countries which have not yet submitted their plans – which represent over 75% of global emissions – deliver much greater ambition this year. Meanwhile, countries that already put forward weak offers in 2020 should revise their commitments upward… Over half of G20 countries now have commitments to net-zero emissions targets, but few have set 2030 interim targets that align with achieving those commitments.”

Mountford praised the EU and the UK for improving their NDCs significantly, but was critical of Australia and Russia, “which did not strengthen their efforts at all.” She also pointed out that the new plans of Brazil and Mexico “have even weaker targets than what they put forward five years ago.” Other observers pointed out that Japan, South Korea and New Zealand had not improved their NDCs either.

Tasneem Essop, executive director of Climate Action Network, said, “The US and China – yet to submit their NDCs – must do so as soon as possible. It is imperative that the US delivers its fair share – both on emissions reduction and on finance.

Role of the UK

Sustained diplomacy by the French government throughout 2015 was a major reason that countries reached an agreement in the Paris summit at the end of that year. It is now the turn of the British government, which is hosting this November’s summit.

Most observers feel a concerted diplomatic effort is a must in 2021 if GHG emission controls are to reach anywhere near what is required to prevent runaway climate change.

'ICIMOD’s work is aimed towards goal of resilience building'