“Even after three years, the villagers remain heartbroken,” said Hajida Parveen, referring to a flood that washed away more than half of Badswat village in the Gilgit-Baltistan region of northern Pakistan.

Parveen is a social mobiliser with the Aga Khan Rural Support Programme (AKRSP), an NGO. Since the glacial lake outburst flood in 2018, “nothing seems to cheer [the villagers] any more”, she said. “A common refrain is ‘give us back our land’.”

The flood caused a huge lake to form. This blocked the road to 10 villages from the rest of Immit valley, in Gilgit-Baltistan’s Ghizer district. Thirty homes, a school and more than 26 hectares of productive land were submerged. No lives were lost, but around 1,000 people had to be evacuated. Most have returned to the village but are still living in temporary shelters, as their former homes were wrecked by floodwater. 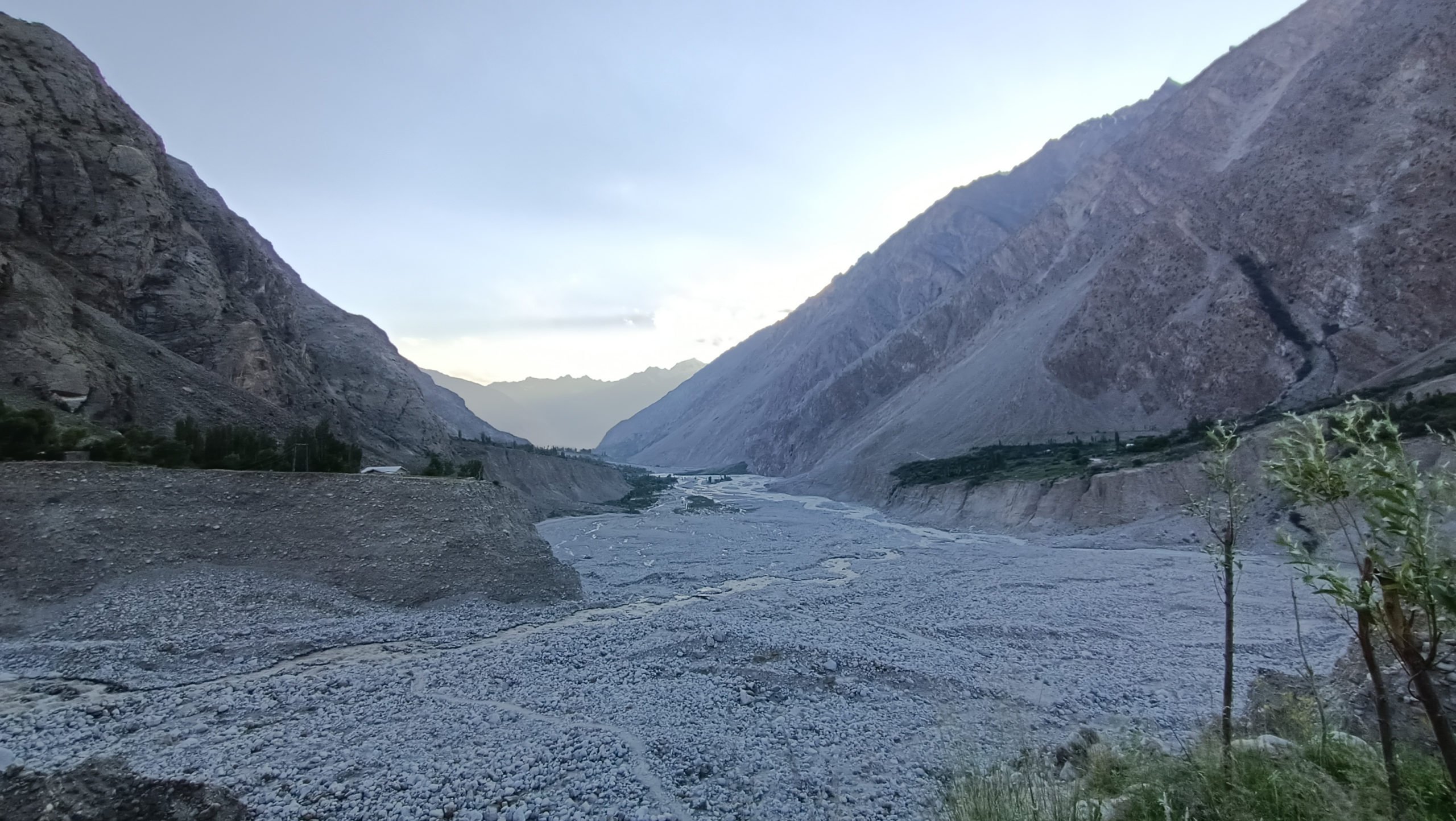 The aftermath of the 2018 glacial lake outburst flood at Badswat. The force of the rushing water pulverised rocks and washed away more than half the village. (Image: Haya Fatima Iqbal)

Across the Hindu Kush Himalayas, communities are suffering the impacts of climate change, especially in the past two decades. In Ghizer alone, thousands of residents have experienced flash floods and landslides that destroy roads, farms, homes and other buildings. This is leading to mental health issues – something residents do not speak about in public for fear of social stigma.

A 2021 study in the northern mountains of Pakistan found that communities in the region have “insufficient or no alternatives to cope and to reduce the adverse impacts posed by natural stresses”. The study looked at 10 Gilgit-Baltistan districts with a long history of climate-induced hazards. It placed Ghizer among the three most vulnerable.

Furrukh Bashir, regional head of the Pakistan Meteorological Department in Gilgit-Baltistan, said these calamities were just a prelude. “Even the slightest change in temperature can play havoc with the fragile mountain ecology,” he told The Third Pole, speaking over the phone from Gilgit.

Living in fear of catastrophes

“Imagine living with the impending fear that you can be marooned and without healthcare, food and electricity,” said Javed Iqbal, who has been working with an NGO for over a decade on the maternal and mental health of Ghizer residents.

Iqbal says there is a link between climate change and mental health issues, and has observed many people suffering from anxiety and depression.

A six-hour jeep ride on a dirt track from Badswat brings you to Darkut village. Nusrat Ali Khan, a 45-year-old paramedic at Darkut’s only government-run clinic, confirmed that mental distress in this village of about 1,000 people is widespread. With flooding a “regular feature” since 2010, he said the community lives with the constant fear of when the next flood will strike.

Khan talked about seeing “signs of depression” among villagers. “They complain of sleeplessness and talk only about their living conditions, their livestock and the lost land.”

Ghamo Ber is one of the glaciers flowing down the slopes towards Darkut village in Gilgit-Baltistan. Floods caused by fast glacial melt linked to climate change are causing severe anxiety among residents, impacting their mental health. (Image: Nusrat Ali Khan)

“I counsel them, tell them to go see a psychologist in Gilgit [53 kilometres away], but they never do,” he added. “I don’t blame them; it’s expensive and time-consuming.” In the absence of anything else, he ends up giving them sleeping pills or relaxants.

Wary of labelling anyone but having witnessed post-traumatic stress disorder (PTSD), Iqbal pointed out that it can develop in people who have experienced dangerous events that have disrupted their lives. Years after the disaster at Badswat, he sees people sitting “idle near the lake, gazing into the water”.

Like Parveen of AKRSP, Iqbal believes residents should leave. “All they think about and talk about is the calamity that befell them; they need to be taken far from the scene of devastation,” he suggested.

“They have lost their homes, their land and all their assets. Their present living conditions are harsher without wood or electricity,” said Iqbal, adding that several micro hydropower plants destroyed in the flood are still being repaired.

Parveen said: “Compared to the vast land they once had, for the last three years they are living in small one-room shelters where they sleep, cook and store their belongings, just a short distance from their flooded home.”

Kharygal Ghamo is another glacier that flows down the slopes towards Darkut village in Gilgit-Baltistan (Image: Nusrat Ali Khan)

Climatologist Bashir witnessed similar trauma during the 2010 Attabad lake disaster, in the Gojal region of Hunza Valley in Gilgit-Baltistan. Living there for two months to set up a weather station at the Passu glacier, he saw the “pain and stress” on the faces of peoples whose homes, land and orchards went under water “right before their eyes”.

Bashir pointed out that relocation comes at a huge social price, as it means giving up “long-formed affiliations and associations”.

Among the effects of trauma, of particular concern is a rise in suicides, especially among young women.

Local journalist Durdana Sher has been documenting this situation since 2005. “There are more cases of suicide being reported from this district [of Ghizer] compared to any other part of Gilgit-Baltistan,” he said. Between 2006 and 2017, he reported on 203 suicides in Ghizer. There are no publicly available records from a previous period, but local doctors say the numbers used to be far lower.

While there are many reasons for suicide, Sher acknowledged the potentially grave impact of climate-induced devastations “where entire villages are hit by a calamity and you lose your family, your home and are relocated”.

All they think about and talk about is the calamity that befell them; they need to be taken far from the scene of devastation

Sher stopped reporting on suicides in 2017, after community elders said it was “giving a bad name to our region”.

Iqbal and his team have carried out extensive research on suicides in Ghizer and have developed a “life skill” manual to help young people cope in times of adversity. No suicide has been reported from the district since 2019, Iqbal added.

He said it was urgent the government recognises that climate change impacts have serious mental health consequences and to work towards reducing trauma.

The government should have seen all this coming. The IPCC (Intergovernmental Panel on Climate Change) had warned in a 2012 report that global warming was making floods more frequent and intense. Most residents of Ghizer are unaware of that connection, but they do see the other major reason – tree felling.

“The cutting of trees to meet the needs of a constantly increasing population has made the soil loose and vulnerable,” said Bashir. He added that the soil erosion is worsened by the water channels people dig to irrigate their farms.

Iqbal can recall more climate impacts. “When I was young, we stored grain and meat for two months because we would be snowed in our homes. Not any more, as it does not snow as much or as heavily.” For people who do not own refrigerators, very low temperatures aid food storage. Heavy snow is also important as it waters the spring crops as it melts.

Durdana Sher recalled that rainfall used to be slow and widespread. “Now it’s full of fury, of the kind you see in cities.”

The shifting precipitation pattern was confirmed by Bashir, who added: “The behaviour of glaciers in the Karakoram and the Himalayas is divergent, with some glaciers retreating and others surging.” Glacial surges and glacial lake outburst floods have been the most dominant hazards in recent years, he said, giving examples of the surges in the Khurdopin glacier in Shimshal valley and the Shishper glacier in Hassanabad, Hunza. These glaciers slipped miles in unusually short time periods, blocking valleys and creating lakes. Glaciers surge when meltwater at their base lubricates the ice layer above.

Haya Fatima Iqbal, a filmmaker, recently directed The Sky is Far, The Earth is Tough for the Aga Khan Agency for Habitat on the issue of mental health and climate disasters. While making the film, she spent three weeks with affected communities and could see how these issues gnawed at their well-being.

“Given that climate disasters will increase in frequency in future, we must train healthcare workers to identify and manage the mental health issues that beset these communities,” Fatima Iqbal said, adding that evaluating mental health should become a part of disaster response.

Khan, the paramedic at Darkut, said it would be best to train local people to recognise symptoms of mental illness and manage them, since referrals were not working. When designing mental healthcare plans, it is imperative to take input from the communities, he emphasised. “Come visit us, talk to us, see how we live, study our circumstances, and then make plans for us.”

Managing glaciers along CPEC in Gilgit-Baltistan

As glaciers disappear, can we be far behind?