Rainfall has declined across the Indus-Ganga-Brahmaputra basin over the past two decades, reducing the total water available in one of the most heavily populated and climate vulnerable regions in the world, new research shows.

These changes could “pose serious threats to the livelihoods” of the more than 700 million people living in the basin, many of whom depend directly on water for agriculture, forestry, fisheries and raising livestock.

Scientists from the Indian Institute of Technology (IIT) Roorkee, and the National Centre for Ocean and Polar Research, Goa, used satellite data to track the changes in rainfall  as well as the surface and groundwater stored in the Indus-Ganga-Brahmaputra (IGB) basin from 1998 to 2017.

Decreasing rainfall and warmer temperatures across the IGB have “profoundly affected water storage”. If trends continue, the region will face long-term water stress, they add.

The Roorkee-Goa team of scientists analysed daily rainfall data from 1998 to 2017 to identify monthly and seasonal patterns. Previous studies have looked at annual and seasonal rainfall variations in different areas and over different time periods in the Indus-Ganga-Brahmaputra basin, but this is one of the first studies on water availability across the entire region.

Their results indicate that as the average temperatures rose by 0.02 degrees Celsius each year across the whole basin, the total water stored was reduced by 12.6 mm annually over the region.

Akanksha Patel, research scholar at IIT Roorkee, and one of the authors of the paper, told The Third Pole that the changes in total water stored are linked to reduction in rainfall and snow, and these changes vary from place to place.

Their study shows a decline in water resources in the eastern part of the IGB basin which includes the Ganga (Ganges) and Brahmaputra, and an increase in the western or the Indus part of the basin.

The study’s findings add weight to previous warnings of India’s declining water availability. A 2018 report of the government think tank National Institution for Transforming India (NITI Aayog) warns that “India is suffering from the worst water crisis in its history and millions of lives and livelihoods are under threat.” An estimated 600 million Indians face high to extreme water stress and about 200,000 people die every year due to inadequate access to safe water, it says. By 2030, the country’s water demand is projected to be twice the available supply, implying severe water scarcity for hundreds of millions of people.

The NITI Aayog developed a water management index for Indian states, primarily to spur them to improve water governance. The Indian states that scored low in the index, which include Bihar, Uttar Pradesh and Haryana in north India, fall in the Ganga basin. 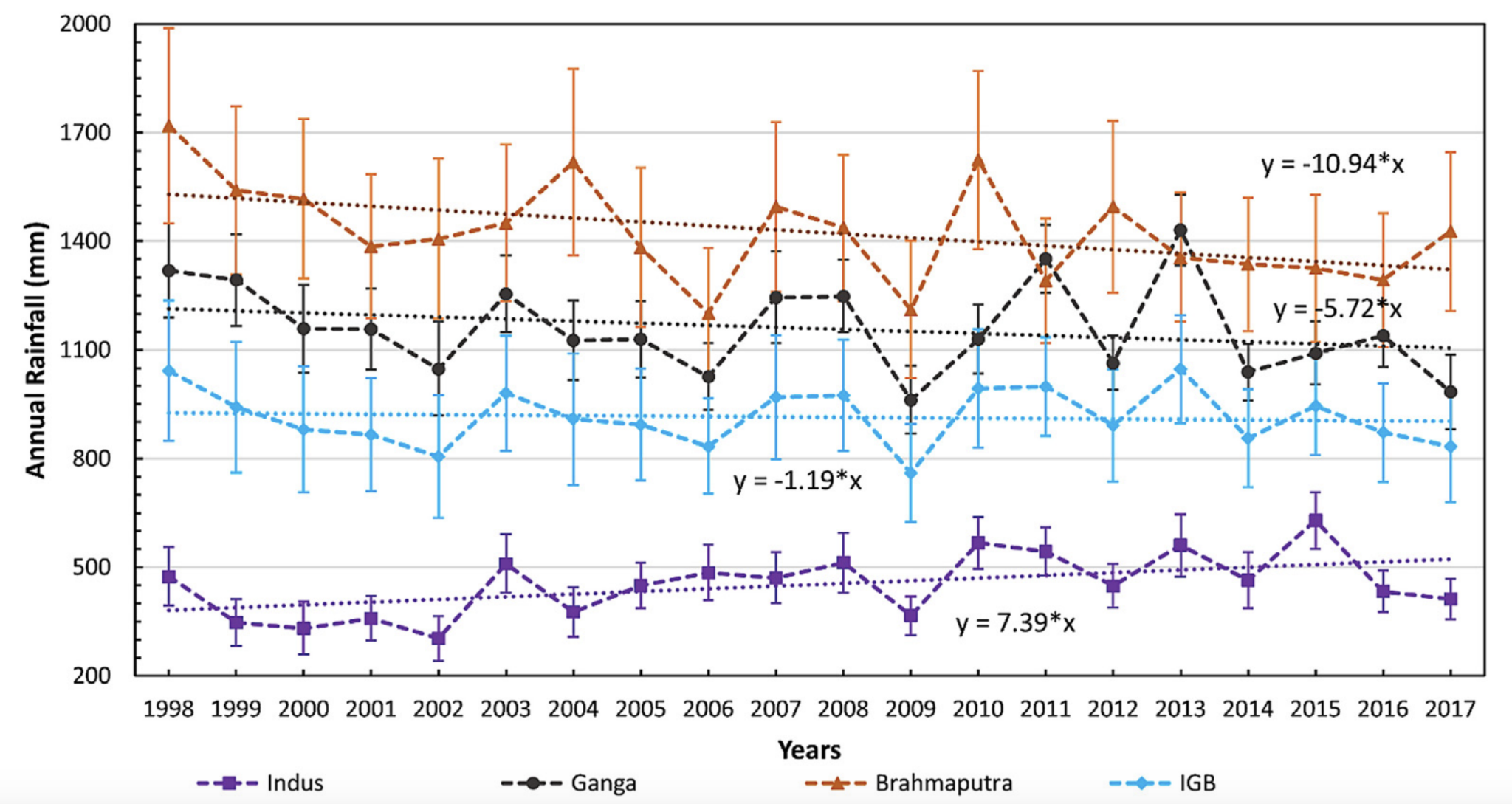 Since 1998, annual rainfall in Indus, Ganga and Brahmaputra basins has shown an overall declining trend

Some scientists, however, point out that while the new study findings are interesting, the use of satellite data is an indirect method of assessment, without accompanying ground data on water supplies. The study also does not indicate how much water comes from snow or rainfall, how much is stored underground or on the surface, or how much is lost due to run-off.

Arun Shrestha, regional programme manager of river basins and cryosphere at the International Centre for Integrated Mountain Development (ICIMOD), Kathmandu, says that ICIMOD’s research indicates that water availability in the IGB region could increase by 2050 because of climate change, primarily due to increased ice and snow melt in the Indus basin together with an increase in rainfall.

The average discharge of water into the entire Indus-Ganga-Brahmaputra basin is likely to increase in both short-term, 2035-2064, and long term, 2075-2100, as compared to 1981-2010, mainly due to increase in precipitation extremes and temperature extremes, he adds.

“Water availability is a complex interplay between precipitation (rainfall and snowfall), cryosphere (places where water is in frozen form, as ice) melting and water use,” Shrestha says. “There are strong variations in glacier change and water availability in the three basins as a result of the differences in geography and influence of monsoon and non-monsoon precipitation.”

In any case, the results of the new study can be useful in developing adaptation strategies and policy decisions to mitigate the adverse effect of climate change and extreme events, the scientists write in their paper. For example, the better understanding of rainfall trends can help inform sustainable water management policies.

Overextraction of water for agriculture lies at the heart of the region’s water problems. How water is used, especially in the context of crop practices, plays an important role in determining total water storage, says Rajiv Sinha, professor at the department of earth sciences at the Indian Institute of Technology Kanpur. For example, there is a groundwater crisis in north-western India, especially in Punjab and Haryana states which were at the centre of India’s Green Revolution. The country ramped up wheat and rice production in the 1960s by introducing high-yielding varieties which also required high levels of irrigation and fertilisers.

“The groundwater crisis in north-western India is the result of over-exploitation of groundwater resources for irrigation,” a team of scientists that included Sinha wrote in Nature Scientific Reports in August.

Computer simulations showed that if the groundwater continues to be extracted at current rates until 2028, water levels will fall by up to 2.8 metres each year in some areas. However if extraction was reduced by 20% each year, rates of groundwater decline could be reduced by up to 67%.

How to recharge groundwater?

Sinha’s studies in Bihar, where the Ganga flows, show a 2-3 metre decline in groundwater levels in several districts both before and after the monsoon from 2004 to 2013.

India needs to design ways to recharge groundwater, such as check dams, percolation ponds, or by injecting water directly into the aquifers, Sinha adds. It also needs to change its crop growing and irrigation practices to avoid future water stress.