With industry and transport restarting after the lockdown forced by the Covid-19 pandemic, India and the world have a great chance to control greenhouse gas (GHG) emissions. Failure will mean a country with worse heatwaves, droughts, cloudbursts, floods and a more degraded coastline, according to the Indian government’s first comprehensive report on current climate change impacts and future scenarios till the end of the century.

Prepared by experts at the Pune-based Indian Institute of Tropical Meteorology (IITM), the report records that India’s average temperature has risen by around 0.7 degrees Celsius during 1901–2018. It would have risen more if the sky had not been obscured by a pollution haze. But that is no reason to allow the pollution that kills millions every year.

Instead, there is every reason to control GHG emissions as well as other pollution. The report “Assessment of climate change over the Indian region”, forecasts that unless steps are taken, between 2070 and 2099 average temperature over India will rise by approximately 4.4 degrees Celsius relative to the recent past (1976–2005 average).

This is a scenario caused by high GHG emissions that would increase heat on the earth’s surface by 8.5 watts per square metre. Called RCP8.5, this is the worst-case scenario used by climate modellers worldwide. In a medium GHG emissions scenario, called RCP4.5, average temperature in India would rise by 2.7 degrees Celsius in the last three decades of this century.

Despite all countries, including India, making pledges under the 2015 Paris climate agreement, current emissions are taking the world to the worst case scenario, though other development pathways are not only available but economically more attractive in the medium and long term.

The rise in average temperature means hottest days will be hotter. The report forecasts that by the end of the century, hottest days will be 5.5 degrees hotter in the RCP8.5 scenario, and 4.7 degrees hotter in RCP4.5. “The frequency of summer (April–June) heat waves over India is projected to be 3 to 4 times higher by the end of the twenty-first century under the RCP8.5 scenario, as compared to the 1976–2005 baseline period,” it adds.

IITM experts have calculated that the mountains of the Hindu Kush Himalayas (HKH) experienced a temperature rise of about 1.3 degrees Celsius between1951 and 2014. Several areas of HKH experienced a declining level of snowfall and also retreat of glaciers in recent decades, though some glaciers in the high-elevation Karakoram range has escaped this retreat, due to more winter snowfall.

Alarmingly, the experts say, “By the end of the 21st century, the annual mean surface temperature over HKH is projected to increase by about 5.2 degrees Celsius under the RCP8.5 scenario.” That will accelerate glacier retreat, which means meltwater flows in the rivers of northern India will become more uncertain in non-monsoon months, when such water is crucial for millions of people. People living in the Himalayas are already suffering as springs dry up, and that trend will also accelerate with the average temperature going up by this extent.

The heating over land is mirrored by the heating over the sea. “Sea surface temperature (SST) of the tropical Indian Ocean has risen by 1 degree Celsius on average during 1951-2015, markedly higher than the global average SST warming of 0.7 degrees Celsius, over the same period,” the report says. It forecasts that this trend will continue throughout this century.

All this affects the June-September monsoon on which so many Indian farmers continue to depend. Global climate models forecast a rainfall increase, but “the summer monsoon precipitation (June to September) over India has declined by around 6% from 1951 to 2015, with notable decreases over the Indo-Gangetic Plains and the Western Ghats,” as the report points out. The reason, it says, is air pollution. 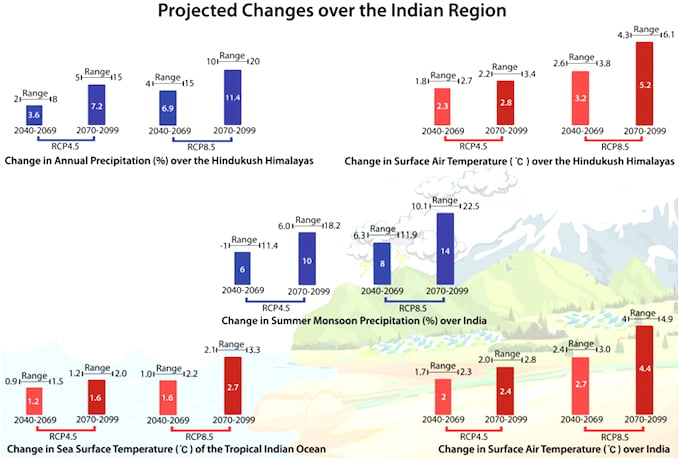 Not only is it raining less during the rainy season, the rainfall is more uneven. The scientists note, “There has been a shift in the recent period toward more frequent dry spells (27% higher during 1981–2011 relative to 1951–1980) and more intense wet spells during the summer monsoon season… Over central India, the frequency of daily precipitation extremes with rainfall intensities exceeding 150 mm per day increased by about 75% during 1950–2015.” The report predicts an increase in this variability.

This means a worsening cycle of droughts and floods. The report records this increase in droughts and predicts that there will be even more droughts in the highest emissions scenario.

The report records that around India the sea has risen 3.3mm per year between 1993 and 2017. The scientists forecast that even in an RCP4.5 scenario, by the end of the century the seas around India will rise by 300mm from the average level between 1986 and 2005. This means a larger area along the coast will be affected by storms and saltwater intrusion.

Global climate models predict an increase in frequency of storms due to climate change, but the Indian scientists have found no evidence of it. However, they have found that the strong cyclones are getting stronger, as seen recently in the case of Cyclone Amphan.

Overall, climate change has already made India hotter and drier since the middle of the 20th century, with more droughts, cloudbursts, floods, rising seas, stronger cyclones and a change in the monsoon pattern. “Human-induced climate change is expected to continue apace during the 21st Century,” the scientists fear. With IITM being a part of India’s Ministry of Earth Sciences, which also supervises the India Meteorological Department, the report’s immediate recommendation is to have more weather stations across the country.

On a wider scale, the report says, “The rapid changes in India’s climate projected by climate models will place increasing stress on the country’s natural ecosystems, agricultural output, and fresh water resources, while also causing escalating damage to infrastructure. These portend serious consequences for the country’s biodiversity, food, water and energy security, and public health. In the absence of rapid, informed and far-reaching mitigation and adaptation measures, the impacts of climate change are likely to pose profound challenges to sustaining the country’s rapid economic growth, and achieving the sustainable development goals (SDGs) adopted by UN Member States in 2015.”

Detailing these impacts in the report’s concluding section, the experts say, “It is crucial to make vulnerability assessment central to long-term planning for developing adaptation and mitigation strategies.” They list the steps that individuals and policymakers can take to reduce GHG emissions, control climate change impacts and derive other benefits.

All these are doable, have been done and have proved economically viable. What they need is countrywide scaling up, which is dependent on political will.

Responding to the report, Anjal Prakash, research director and adjunct associate professor, Bharti Institute of Public Policy, Indian School of Business and a co-author of various reports of the Intergovernmental Panel on Climate Change (IPCC), said, “This is first and a very welcome step in inducing science into policy making process and I am sure this effort will lead to specific policy making or informing policy which will help Indian populations affected by the changes in climatic conditions.”

Navroz K. Dubash of the Centre for Policy Research, and also an IPCC co-author, said, “The report makes clear climate change is not an abstract idea; its effects are with us already in India, and are expected to accelerate. This report will stimulate an urgent scientific and policy conversation on how India can and should prepare for a climate-disrupted Indian future.”

A cartoonist captures the biodiversity of Assam