Over the past three decades, the severity of both droughts and floods has increased in the Indian state of Assam. In this new normal, where flash floods are increasingly common, village disaster management committees are stepping up to save lives.

The village of Chomoni Chapori is one such place. Everybody recalls the birth of a child during a storm seven years ago. The surging waters of the Brahmaputra and its tributary Jhanji – located within a five-kilometre radius of the village – engulfed the mud houses along the village’s single road. By the time Aparajita Borah realised she was going into labour, it was 6 am. Rain pounded the windows of her house.

Her brother dialled 108 for an ambulance. It was three kilometres away, across the floodwaters. Bhupen Bora, the president of the Duryug Bebosthapana Samiti, the village disaster management committee, sent a boat right away with two to three volunteers. They made sure Aparajita arrived at the right location. “Thanks to him [Bhupen Bora], I got the boat. I gave birth around 8.00-8:15 a.m. on the boat itself,” she said.

In August this year, a study conducted by professors at the Indian Institute of Technology Guwahati on the impact of climate change on rainfall in the upper Brahmaputra valley of Assam was published. It found that the state has experienced longer durations of high-intensity rainfall or dry spells in recent years.

“The new pattern of rainfall leads to more incidents of soil erosion [and] landslides. [The] enormous volume of run-off leads to heavy deposition of debris and silt, causing flash floods. In the absence of proper documentation, it is difficult to get a quantitative idea of such incidents,” said Partha Jyoti Das, who heads the water, climate and hazard division of the Guwahati-based think-tank Aaranyak.

With floods worsening in the state, village committees in Assam face a problem of a different scale. Last year, record-breaking rainfall brought a tributary of the Brahmaputra – the Jhanjhi – back to life, to the extent that it overflowed its banks, and a flash flood followed.

In unexpected situations like this, farmers like Anando Bora look to village committees to rescue them. Bora, who is in his 90s, and his family graze their buffaloes on lush islands spread across the Jhanjhi River. When the river washes away calves and decimates the islands during floods, his livelihood suffers. His milk yield reduces from 10 litres to 2-3 litres a day, Bora said. 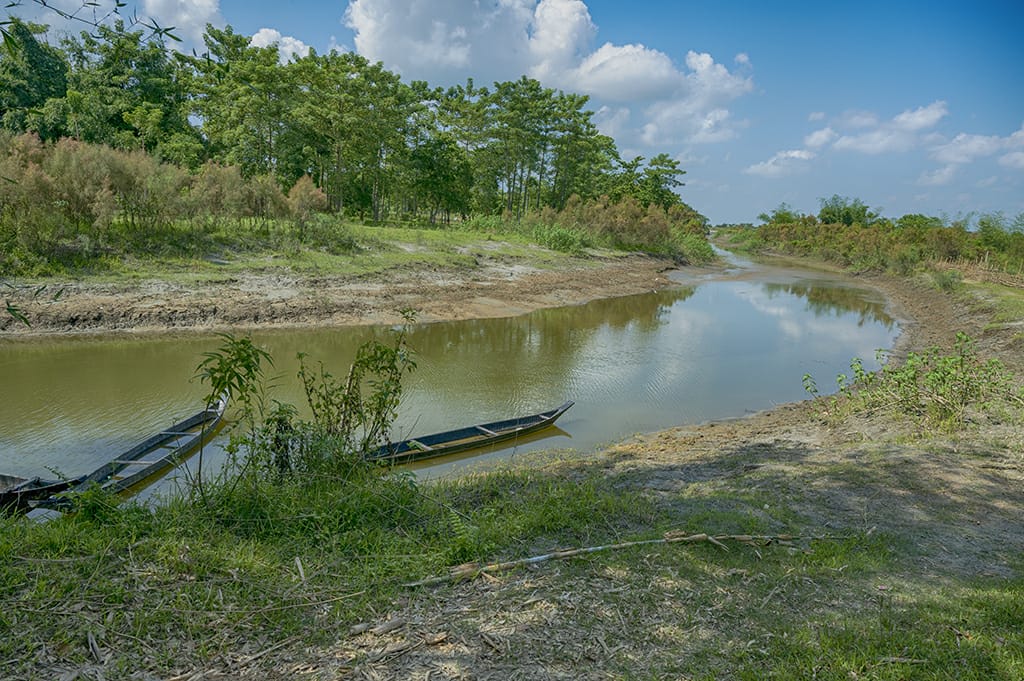 Villager Anando Bora and his family graze their buffaloes on islands spread across the Jhanji River (Image: Subhra Dhar) 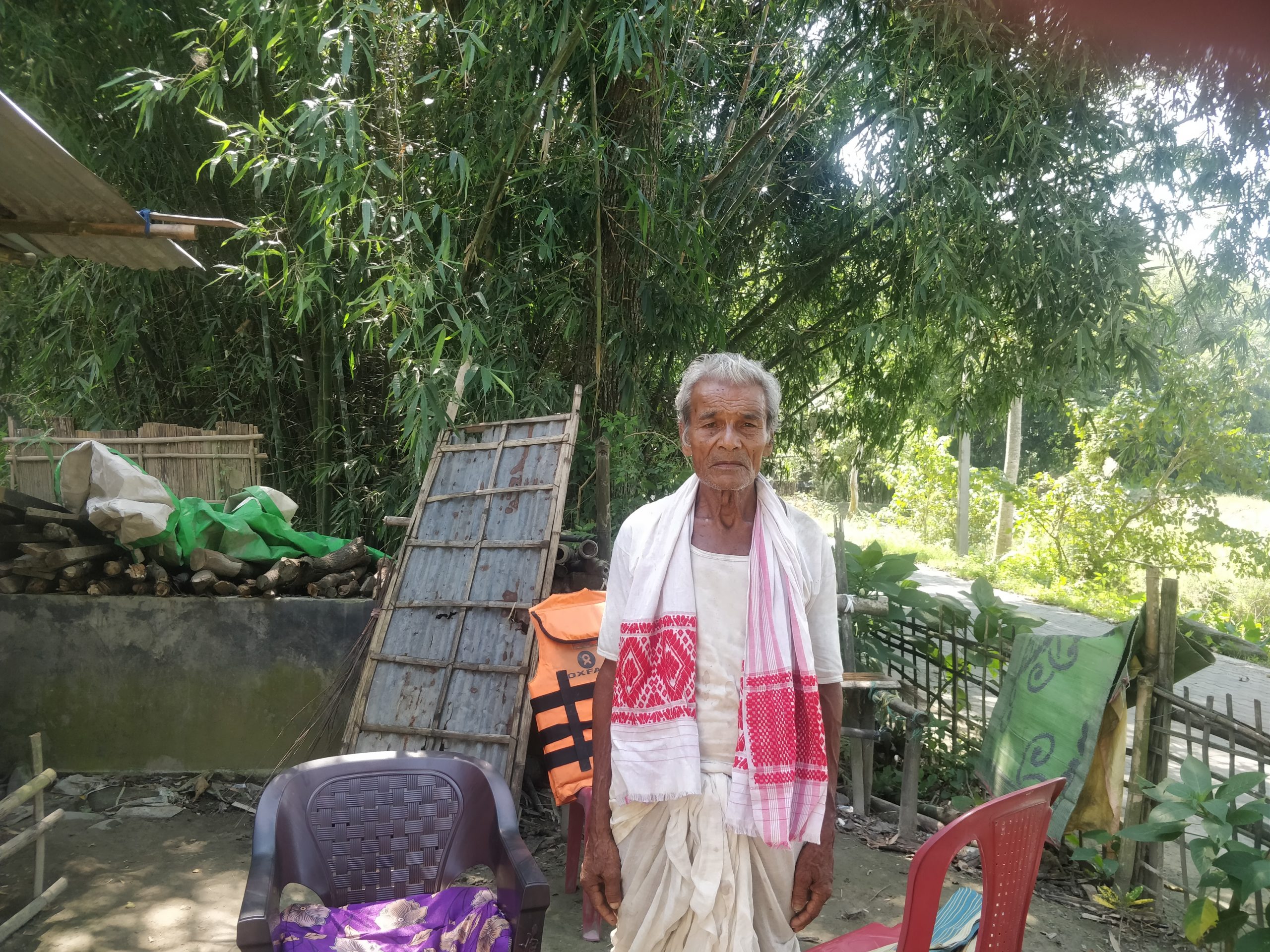 During the 2020 floods, Bora, his family and their animals were stranded on an island. “Six families were stuck among 300 to 400 buffaloes. They couldn’t leave their buffaloes. I had to send the boats [to] rescue [them],” Bhupen said.

The village committees are changing the social fabric of the region. Communities living in Chomoni Chapori and surrounding villages, in the catchment area of the Brahmaputra and its tributary Jhanji up to its confluence, used to be largely self-reliant. The slew of disasters is pushing cooperation, and creating leaders.

Every village has its own disaster committee comprising 15 to 17 members who have four main responsibilities. An early warning team provides information to the community prior to a disaster to prevent loss of life and property; a first aid team covers the administration of basic healthcare to those injured in accidents; a WASH team covers the sanitation, hygiene and water issues related to a disaster; and the search and rescue team looks for survivors.

When equipped with adequate resources and capacity, frontline communities can save lives and create awareness without depending on the government

These committees, organised with the support of local NGO North-East Affected Area Development Society (NEADS), act as emergency responders in 70 villages in the districts of Majuli, Jorhat and Golaghat in Assam.

“The frontline communities have a deeper understanding of the disasters they face. When equipped with adequate resources and capacity, they can save lives and create awareness without depending on the government,” said Tirtha Prasad Saikia, the joint director of NEADS.

Bhupen Bora, a farmer, is the president of Chomoni Chapori’s village disaster management committee. He is engaged in both early warnings and search and rescue operations. If the Brahmaputra level rises in nearby Dibrugarh – around 138 kilometres from Chomoni Chapori – the water takes at least 12 hours to reach his village in Jorhat district. Hence, it’s essential for Bhupen to follow flood updates closely and relay this information to his community, so they have time to prepare.

He is also responsible for the distribution of relief and humanitarian aid among villagers and submitting action plans proposed by NEADS to the panchayat (village council). He won the approval of the village council to instal flood-proof tubewell, as the tubewells provided by the government were not working. “I raised the issue so that people can drink clean water. Now, there are 10 such tubewells for every ward [a smaller unit of villages] of the gram panchayat,” he said. 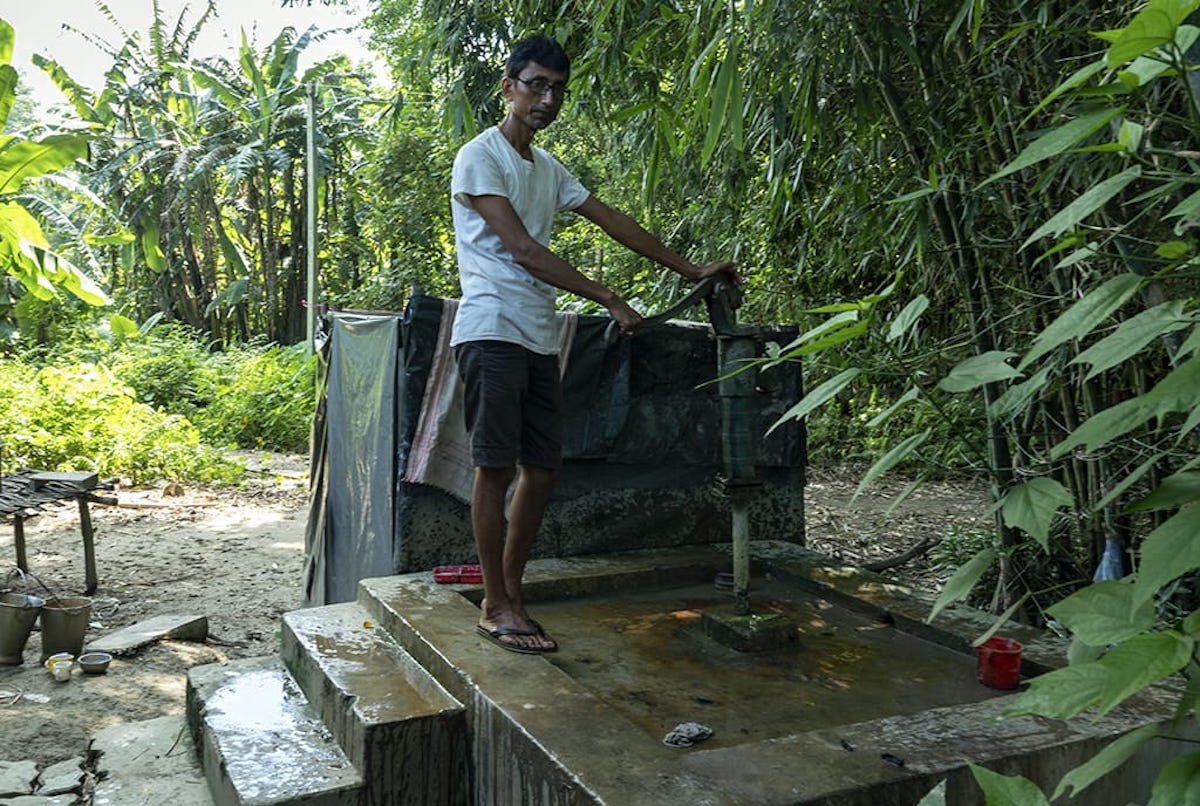 Women make up half the committee

In the aftermath of floods, when sanitation and hygiene facilities are hit hard, women are severely affected. “Toilets are not available during floods. I have to go to a distant chapori [island],” said Aparajita from Chomoni Chapori. To address these issues, the village committee ensures half of its members are women.

Nitumoni Doley, a villager in her mid-30s, is responsible for teaching women in Ouguri Mising village to disinfect water from tubewells during floods.

“I personally go to their homes and bleach the water from tubewells. I ask them to boil water before intake,” Doley said. She also keeps records of pregnant women who fail to keep up with routine checkups.

“I ensure no pregnant woman is late for her checkup, especially during heavy rainfall. I arrange for them to travel to the nearby PHC [primary health centre] by boat if required,” Doley said. For the past two years, she has managed to secure raised flood-proof toilets for women in her community. “The toilets are created on higher ground where the tanks are kept. A drain system is arranged between two tanks,” Nitumoni told The Third Pole.

Menstrual hygiene is often not considered a priority in emergency flood response. “Flood victims, especially women, are more concerned about saving their lives and resources. Their sanitation concerns and menstrual hygiene take a back seat, making them more vulnerable,” said Rituparana Patgiri, assistant professor at Delhi’s Indraprastha College for Women. But Doley has that ticked off her list of essential duties. Before and after floods, she distributes sanitary napkins for free to vulnerable women.

Drills, training and a bigger role for disaster management committees

This year, rainfall has been low rather than high; severe floods only arrived in late August. According to the Assam State Disaster Management Authority over 225,000 people from 15 districts in Assam have been affected.

Floods or no floods, disaster management committees in Assam make sure their message gets out. Through emergency drills, they keep communities on their toes. During the last drill in March, Bhupen Bora said, villagers in Chomoni Chapori were taught to quickly string together plastic bottles to make a lifejacket; build a makeshift stretcher from bamboo poles and bedsheets that can be hauled over floodwaters; and identify a snake bite before calling for emergency assistance. 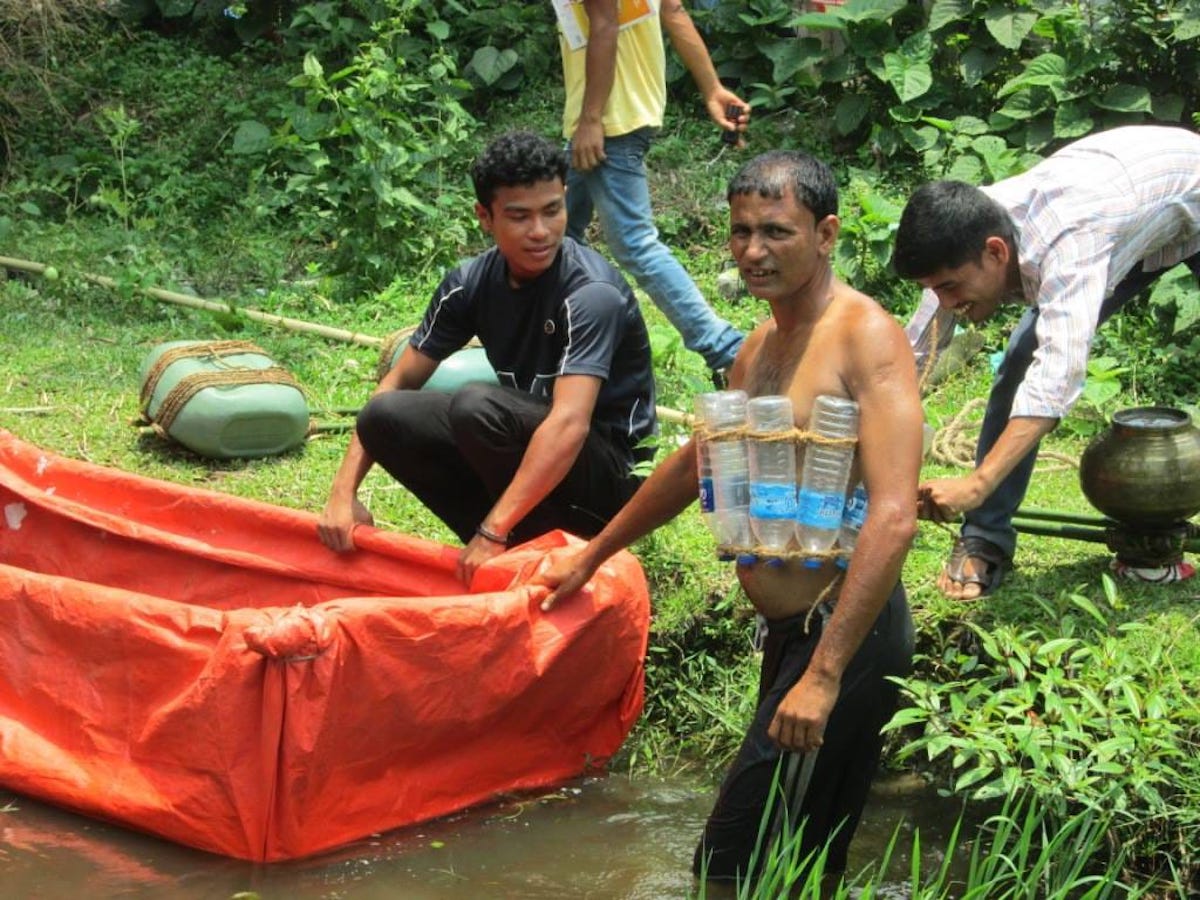 The success of the village disaster management committees in Assam suggests they could do far more. “There is no other institution which can understand climate change better. But everyone bears them in mind only when floods occur,” said Eklavya Prasad, managing trustee at Megh Pyne Abhiyan, a public charitable trust working on water stress in eastern India.

“When the government talks about the impact of climate on floods, they should look towards non-structural measures like taking [into account] the insights of such communities in knowing the river and its tributaries.”