In the tropics and sub-tropics, the house is already on fire, and researchers are not the ones leading the efforts to tackle climate change effects – it is the people who find their farm yields going down or their farms being inundated by a rising sea, the communities displaced by untimely floods or storms, the people forced to migrate or to dig deeper underground for drinking water as droughts intensify, as one is doing in India right now.

In this situation, one of the most useful things researchers in the global South can do is to study what people are doing to adapt to climate change impacts, what is working and what is not.

That is why the book “Climate Change Governance and Adaptation: Case Studies from South Asia” is so important. Edited by Anamika Barua of the Indian Institute of Technology (IIT) – Guwahati, Vishal Narain of the Management Development Institute in Gurgaon (India) and Sumit Vij at Wageningen University (Netherlands), some of the chapters are especially valuable because their authors pull no punches. 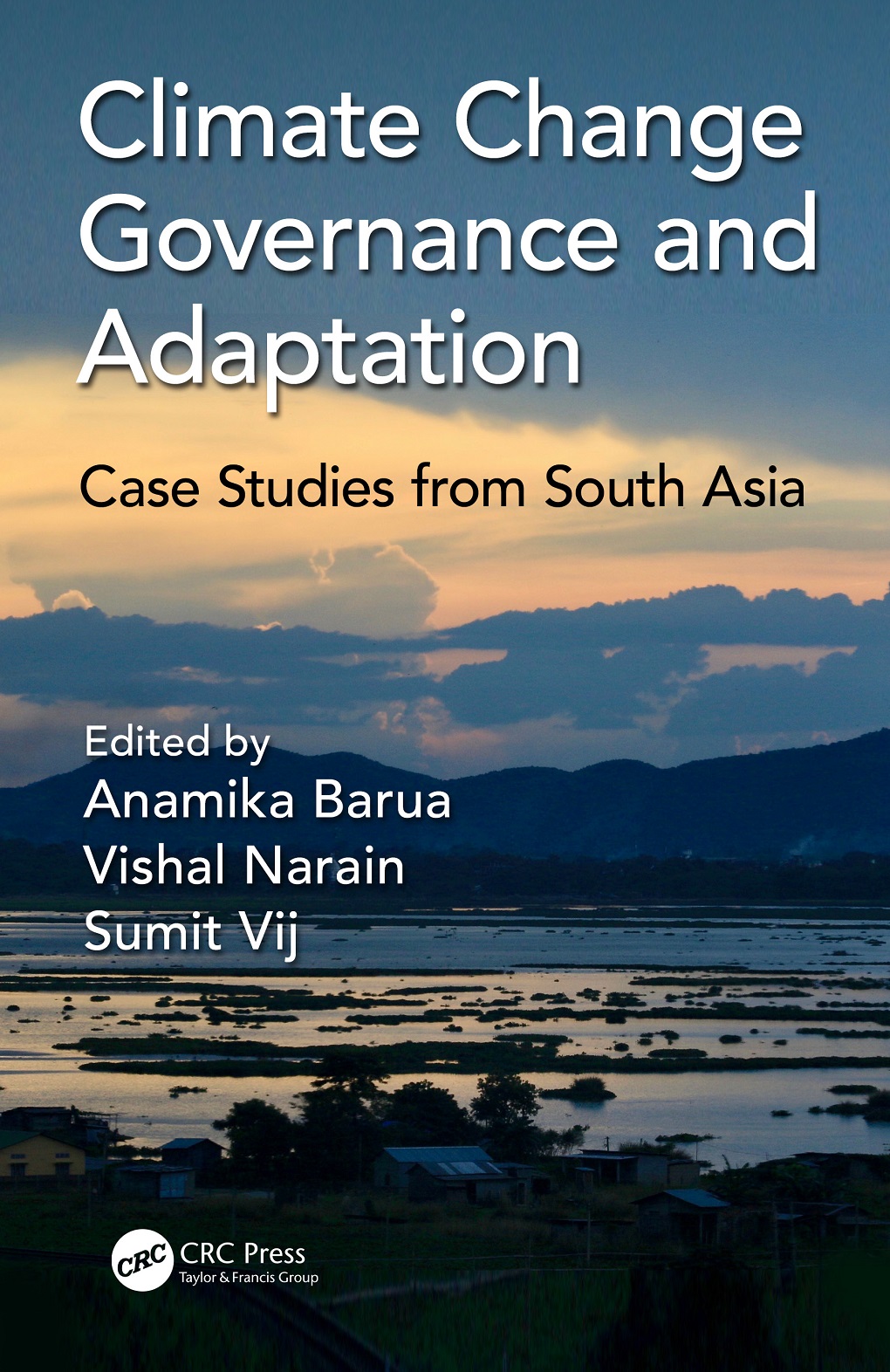 The editors start by pointing out the differences between developed and developing countries in their responses to climate change. “The global North has continuously debated climate change as an environmental and social problem,” they write. “Recently, research in the global South has emphasised issues of vulnerability and community-based adaptation, mostly at the local level. Issues such as governance of adaptation at different levels remain poorly studied in the context of South Asia.”

They point out that this lack of focus on socio-political relevance neglects the importance of climate change governance and policy research, especially in South Asia, the region from which the case studies for the book have been obtained.

However, a major weakness of the book is that there is hardly any material from Afghanistan, Pakistan, Bhutan, Sri Lanka or Maldives. It would perhaps have been more appropriate to say the case studies are only from Bangladesh, India and Nepal.

Still, the case studies that have been included offer valuable lessons on the governance of climate change adaptation and mitigation at the local, national and regional levels. It is especially good that many of the authors focus on governance, and through that, show the way to policymakers on how to involve local authorities, non-state actors such as civil society, publicly-funded enterprises and – most importantly – the communities themselves.

It is now clear that adaptation to climate change impacts is necessarily a decentralised process; it simply cannot be done without the active participation of all citizens. Importantly, some of the authors point out the crucial role media can play to foster well-governed adaptation. Though the authors and editors do not mention this, constructive criticism would help a lot.

Where does the Ganga go?

But of course, the communities are the most important actors, as brought out repeatedly in the book. For example, Georgina Drew of the University of Adelaide (Australia) makes a case for a more nuanced understanding of people’s perceptions of climate change as she focuses on Uttarakhand in northern India. She argues that climate change is a phenomenon that one needs to study with an “interpretive lens, looking at the meaning that people attach to the process… While glaciologists and climatologists focus on changing glacier melt and river flows, the meaning that people give to these processes shape the adaptive responses of communities.”

Scientists have been telling us that the main tributaries of the Ganga – Bhagirathi, Mandakini and Alaknanda – have been changing their water flows patterns due to climate change. Drew has been studying for several years how local communities have been interpreting this change – how they think that “Ganga, the eternal goddess, can never disappear; instead, she goes into Pataal (underground or underworld).” This interpretation affects the way communities adapt to this climate change impact, and Drew makes a case for policymakers to discuss this interpretation with local residents and take it into account before drawing up adaptation plans, if these plans are to succeed.

In what way do farmers experience vulnerability to climate change impacts and how do they interpret it? Floriane Clement of the Dynamic and Ecologie of Payasages Agriforestiers (DYNAFOR) in Toulouse (France) has been studying this in the lowlands of Nepal. She found what many grassroots workers in South Asia know – consensus building in a community is not easy, but the very effort helps develop a shared understanding of the multiple framings surrounding climate change. And that can help build policy based on what the people need, rather than a prescriptive top-down approach.

Why do people migrate?

The Bangladesh government has been pushing for recognition of those displaced by climate impacts as refugees under international law, to little avail so far. In this connection, the book has a provocative chapter by Anna Wesselink and Michelle Kooy of the UNESCO-IHE Delft Institute of Water Education (Netherlands), Jeroen Warner of Wageningen University, Parvin Sultana and Paul Thompson of the Flood Hazard Research Centre, and Abu Syed of the Bangladesh Centre for Advanced Studies (both in Dhaka).

They argue that the lack of research and explanations for the relationship between climate change and migration results in missing out on issues of power and politics at the community level. Migration – even if forced – is almost never due to a single cause. Traditionally, climate change has not been studied as a push factor. Nowadays, it is being studied by some as a single factor. There is an urgent need for these researchers to stop working in silos and to talk to one another.

Does education help in improving the capacity to adapt to climate change impacts? Bhupen Mili and Anamika Barua of IIT Guwahati and Suparana Katyaini of IIT Delhi spoke to residents in the east district of Sikkim. They found a significant impact when education was added to traditional knowledge of farming and the ecosystem.

While all this is important, it is also important to study what has worked and what has not. Joyashree Roy of the Asian Institute of Technology Bangkok, Shyamasree Dasgupta of IIT Mandi (Himachal Pradesh), Duke Ghosh of Global Change Research, Nandini Das and Sudipta De of Jadavpur University, Debrupa Chakraborty of Netaji Nagar Day College (all in Kolkata), and Debalina Chakravarty of National Institute of Technology Jamshedpur study five “green initiatives” in India from a multi-level governance framework and a socio-technical transition theory. They show how the only way to success is “articulation, participation, and engagement of actors at various levels of the governance structure.”

What happens in transboundary river basins

Navarun Varma of National University of Singapore and Sanjoy Hazarika of Commonwealth Human Rights Initiative show what happens in a transboundary river basin such as the Brahmaputra when an upstream country takes adaptive action in the form of building a dam or a reservoir. Clearly, this action worsens the ability of downstream countries to manage the impacts of climate change. The authors argue that everybody involved in water management need a systemic understanding of the inter-linkages between river basin ecosystems; management sectors for provisioning water, energy, and food; and culture and human aspirations.

This chapter points out that dialogue between non-state actors across international boundaries can offer opportunities for shared understanding, learning, and co-design of solutions and management pathways, especially when aided by transdisciplinary research to integrate different kinds of logic and stakeholder experiences.

The book is undoubtedly valuable, but the editors themselves have identified three major gaps. First, they were not able to capture the influence of power structures on climate change governance at different levels. Second, as the book discusses the role of various non-state actors in climate change governance, there is a missing link on how to use their engagement to influence this process at different levels. Third, the book has limited focus on mitigation, though that is perhaps just as well – governance of mitigation can be very different, and mixing it up with adaptation governance may have confused the reader.