The island is located in the southwestern corner of the Sundarbans, the world’s largest mangrove forest on the shore of the Bay of Bengal. On the north, east and west, Mousuni is separated from the mainland by two distributaries of the Ganga, Chinai and Muri Ganga. To the south is the sea.

The majority of its roughly 30,000 residents live in mud huts, with roofs made of thatch, tiles, tin or asbestos.

Traditionally, they farmed rice and vegetables in one of the world’s most fertile deltas. They made considerable money growing betel leaves (paan). They bred freshwater fish in ponds. Those who did not own land worked as farm labourers. The women would search for shrimp fry in the brackish water, which they sold to aquaculture farms.

Since then, the land has been unable to support all its people. At least one man from just about every household in Mousuni has had to find work elsewhere in India – as labourers in factories, construction sites or farms; as security guards, gardeners, rickshaw pullers, restaurant cooks and waiters and managers.

The remittances Mousuni’s emigrants sent not only supported their parents, wives and children. In some cases, they enabled a change from mud to brick walls for the home, from thatch to a tin or even asbestos roof.

With the promise of these remittances, many residents who lost their roofs or walls to Cyclone Bulbul last November borrowed to rebuild.

But the remittances came to a sudden halt at the end of March, as millions of informal wage earners lost their incomes due to the lockdown forced by the Covid-19 pandemic. Their desperate journeys to get back to their home villages exhausted all their savings.

And then came Amphan, with Mousuni in the eye of the storm for the second time in just over six months.

“Bulbul’s landfall point seems to be around 20 km east of Amphan’s landfall,” observed GK Das, director of the centre.

As the crow flies, or the wind blows, Amphan, Bulbul and Aila all made landfall within 25 km of Mousuni. “It’s an extremely rare event and underlines the acute vulnerability of the area,” said Anurag Danda, senior fellow at think-tank Observer Research Foundation who has worked with the people of Mousuni for decades. 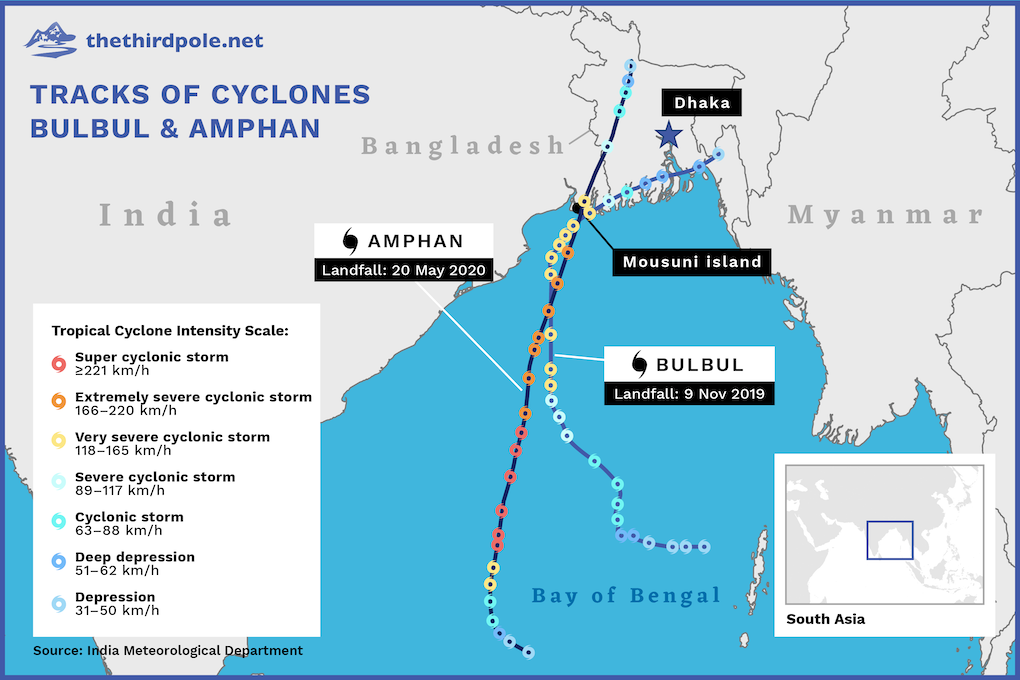 Cyclone Amphan toppled around 1,750 electricity poles in Mousuni, as well as the main tower through which India’s electricity grid reached the island. Engineers estimate it may be months before the power lines are restored.

Meanwhile, people have gone back to lanterns and the few solar microgrids that preceded the arrival of the national grid.

The picture is bleak for homes hit by the double blow. “Our house was badly damaged during Bulbul. We had just finished repairs. Then Amphan blew it away,” said Muslima Bibi, a resident of Baliara, Mousuni’s southernmost village.

Ranjita Mondal, from the adjoining village of Kusumtala, also lost her house twice.

Sheikh Mantaj of Kusumtala said, “I am about 75 and when Bulbul hit last November, I thought that I had seen the strongest cyclone in my lifetime, but within six months, Amphan came. I do not know what more is in store for us.”

“Most of the large trees were uprooted by Bulbul. So Amphan directly hit the mud houses built in the shade of those trees. This maximised the impact and damage,” said Saral Das, a local community worker. 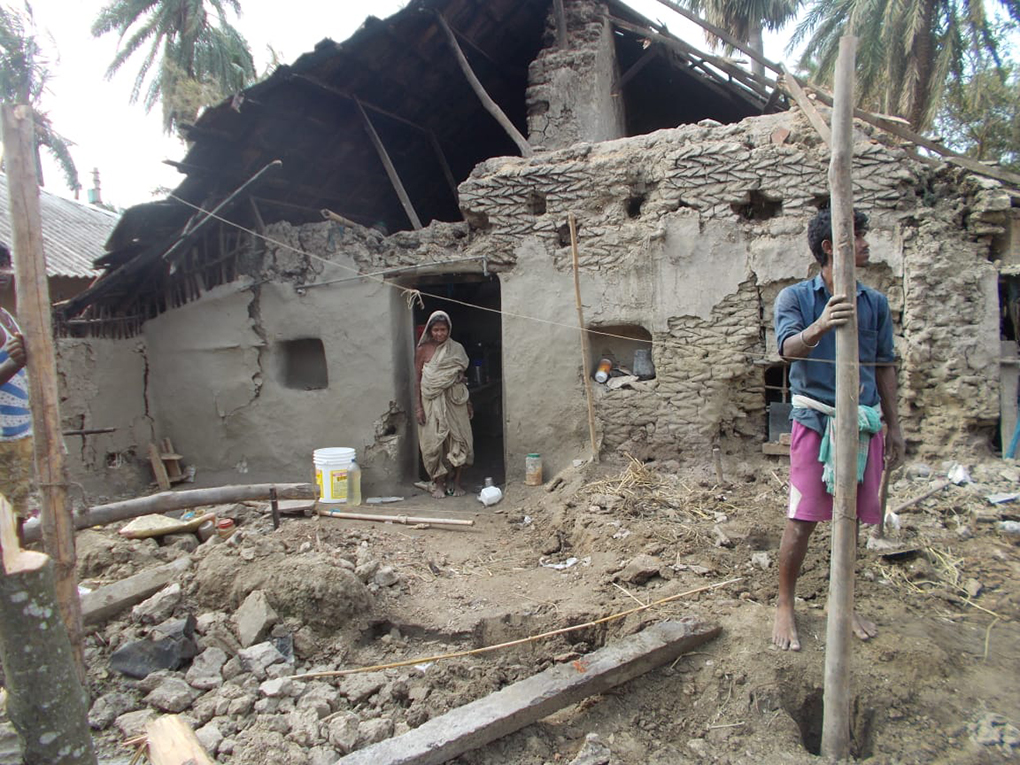 One of the many broken homes in Mousuni [Image by: Medha Basu]

“The fact that we could shift around 11,000 people to four multipurpose disaster shelters before the storm struck saved lives,” said Suvendu Manna, a senior member of the local panchayat (village council). But many refused to move to the shelters because they wanted to save their homes and livestock. The panchayat has asked the state disaster-management department to build four more shelters.

“Almost 85% of around 6,500 houses on the island were badly damaged during Amphan,” Manna told The Third Pole. “Four-fifths of those houses are completely gone. Only brick houses with concrete roofs survived.”

Mousuni’s panchayat has listed the damage caused by Amphan, as it did after Bulbul. The list shows 93% of the 6,500-odd families in the island and 80% of houses were affected twice.

Subhas Acharya, an expert on the Sundarbans, pointed out that the houses built under government-supported schemes were also affected, as people were not given enough money to build concrete roofs.

After Amphan, residents say there is no point repeating the same housing schemes. They want enough financial support to be able to build concrete roofs that will not blow away in the next cyclone.

Displacement has become routine in Mousuni. “This is my fourth house in the past 10 years. Even the land used to bury the dead has not been spared,” said Sakina Bibi of Baliara.

Almost every other household in Mousuni has a similar story.

“Close to 1,500 families have been displaced from vulnerable pockets of Baliara, Kusumtala and Bagdanga in the past 15 years; many, multiple times. After Amphan, about 65 families have now had to shift again,” observed an elderly resident.

The one lucky break during Amphan was that the storm made landfall at low tide, so the sea’s waves were not as high as they might have been. The strongest embankments in Mousuni did save some farms and ponds from saltwater. But others were broken, and many farms will be barren for years.

Despite residents asking repeatedly for embankments, many parts of the island are still without them. A letter from a group of residents to Mamata Banerjee, chief minister of West Bengal, reads, “The embankment has still not been built. The Baliara mauza is flooded with rising seawater every year. The Kusumtala and Bagdanga mauzas are sinking, as well as part of the Mousuni mauza.” A mauza is a term used by the local administration to delineate a piece of land that can be as large as a neighbourhood or a small village. 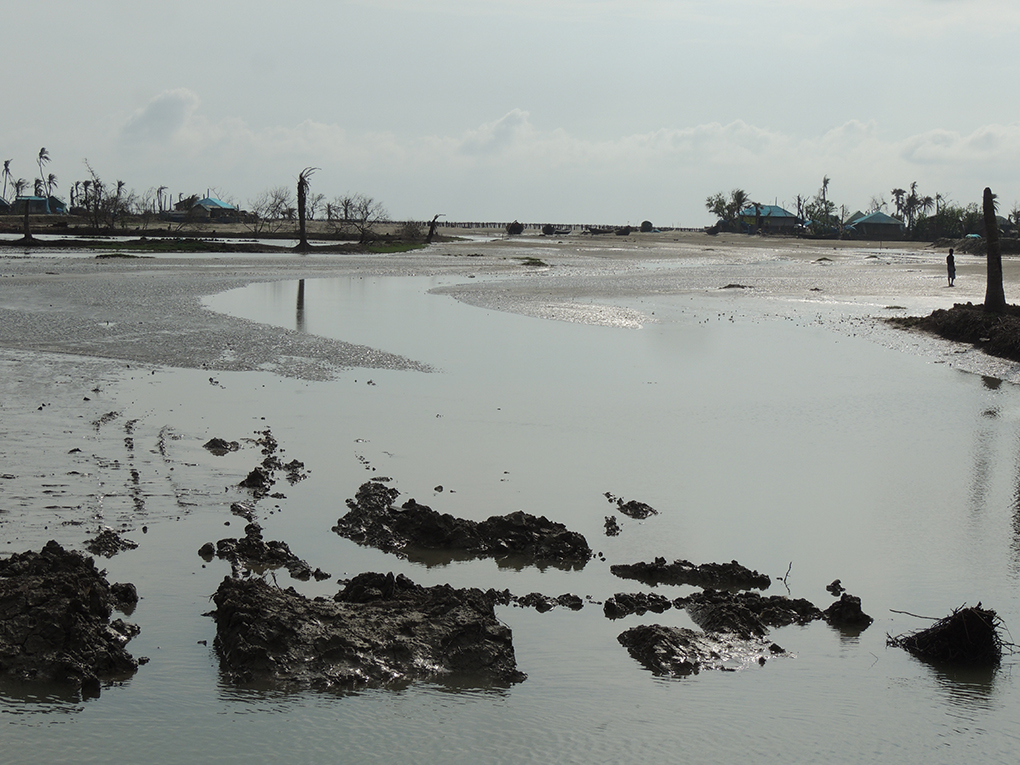 In recent months, a 2.5-km-stretch of embankment on the sea-facing side of the island that had been washed away by Cyclone Aila in 2009 was rebuilt. But of the 29 km of embankments around Mousuni, about 17 km was either non-existent or highly vulnerable, according to observations made before cyclones Bulbul and Amphan.

The local panchayat has calculated that 15 km of embankments was damaged by Bulbul and 16.5 km by Amphan.

“We have four assets: dhaan [rice], paan [betel leaves], sabji [vegetables] and maachh [fish]. All four have been affected twice over,” said Debesh Manna, an elderly resident who owns two betel leaf plantations. Bulbul affected one, Amphan destroyed the other.

Stronger cyclones are the most dramatic impact of climate change in Mousuni, but not the only one. In recent decades, the sea level has risen continuously.

According to studies done by the oceanography department in Jadavpur University, Kolkata, Mousuni has lost about one-sixth of its 28-square-kilometre land area to the rising sea in the past 50 years, while the population has increased by two-and-a-half times.

“The rate of relative sea level rise is about 8 to 12 millimetres per year, as measured at Sagar island adjacent to Mousuni, which is three to four times over the global average,” said Sugata Hazra of the oceanography department. “This is mainly due to significant rise of the sea surface temperature since the end-1990s.”

Mousuni is part of Namkhana block (a number of blocks make a district, a number of districts a state). Records at the block’s office show that Baliara has lost over half of its 19.25 sq. km of agricultural land since 1986 to saltwater. The same records show that 68% of people in Baliara live below the poverty line.

“Disaster-prone areas like Mousuni are almost like punchbags,” said Sanjay Vashist, director of Climate Action Network, South Asia. “They keep taking punches and often don’t get the chance to recover.”

“Though the state government is doing what it can, we need national and international support not only to reconstruct the Sundarbans but also to minimise damage in case of future disasters,” said Javed Ahmed Khan, West Bengal’s minister in charge of disaster management.

“Despite facing severe and repeated climate impacts over the last many years, the vulnerability of people living in Mousuni and elsewhere in the Sundarbans has not yet been recognised. We need to push for more support for the affected people through the international mechanism,” said Harjeet Singh, global climate lead of Action Aid.