On 28 June 2022, India’s Ministry of Environment, Forest and Climate Change (MoEFCC) brought in the Forest Conservation Rules 2022 under the 1980 Forest Conservation Act. The new rules, which have been approved by Parliament, change how permits are given for converting an area of forest to a non-forest purpose (called a forest clearance).

About the Forest Conservation Act, 1980

The Forest Conservation Act was brought in “to check further deforestation”. The Act aimed to diminish the use of forest land for any “non-forest purpose” and mandated state governments to obtain permission from the central government before taking decisions related to the use of forest land. It focused on issues including forest health, protection of wildlife, and land required for compensatory afforestation.

It was not until 2006, when the Forest Rights Act was enacted, that it was mandated that the rights of forest-dwelling communities had to be recognised.

Most critically, the 2022 rules effectively remove the requirement to gain the consent of gram sabhas (elected village councils) before the state government can approve the clearing of a forest.

This will “directly influence how both central and state governments allocate land for infrastructure development and for climate mitigation projects”, said Kanchi Kohli, a senior researcher who works on environmental law and policy at the Centre for Policy Research, a think tank in India.

The legislation has caused an uproar in civil society and among some parliamentarians. As well as eroding the rights of India’s forest-dwelling communities, experts told The Third Pole that the new rules may lead to increased deforestation and weaken the country’s ability to keep its promises to mitigate climate change.

Previously, gram sabhas’ consent was a requirement for projects on forest land to go ahead. But the new rules do not even mention gram sabhas. Responsibility for ensuring that all documentation is complete and forest-dwelling communities have consented has shifted to the state government from the central government. The central government can now give clearances before this consent has been obtained.

This incentivises state forest departments to give forest clearances without conferring with local communities, said Tushar Dash, a legal expert associated with Community Forest Rights – Learning and Advocacy, a network that facilitates the exchange of information on community forest rights. “State governments will have very little say, leading to escalation in conflicts [between forest-dwelling communities and the state],” he added.

At odds with the Forest Rights Act

The 2006 Forest Rights Act vested communities with rights to forest resources, including the right to “protect, regenerate or conserve or manage” forest land to which the community traditionally had access, through the gram sabhas. The Act requires that gram sabhas are provided with the details of project proposals and have given their informed consent before the proposal is submitted.

Recognition of the law has been slow, and there have been shortcomings in its implementation: a 2016 report stated that in the 10 years after the passage of the Forest Rights Act, only 3% of the “minimum potential of [Community Forest Resource] rights has been achieved”. Despite this, experts say that the law did at least create the possibility of forest-dwellers’ participation in decision-making. 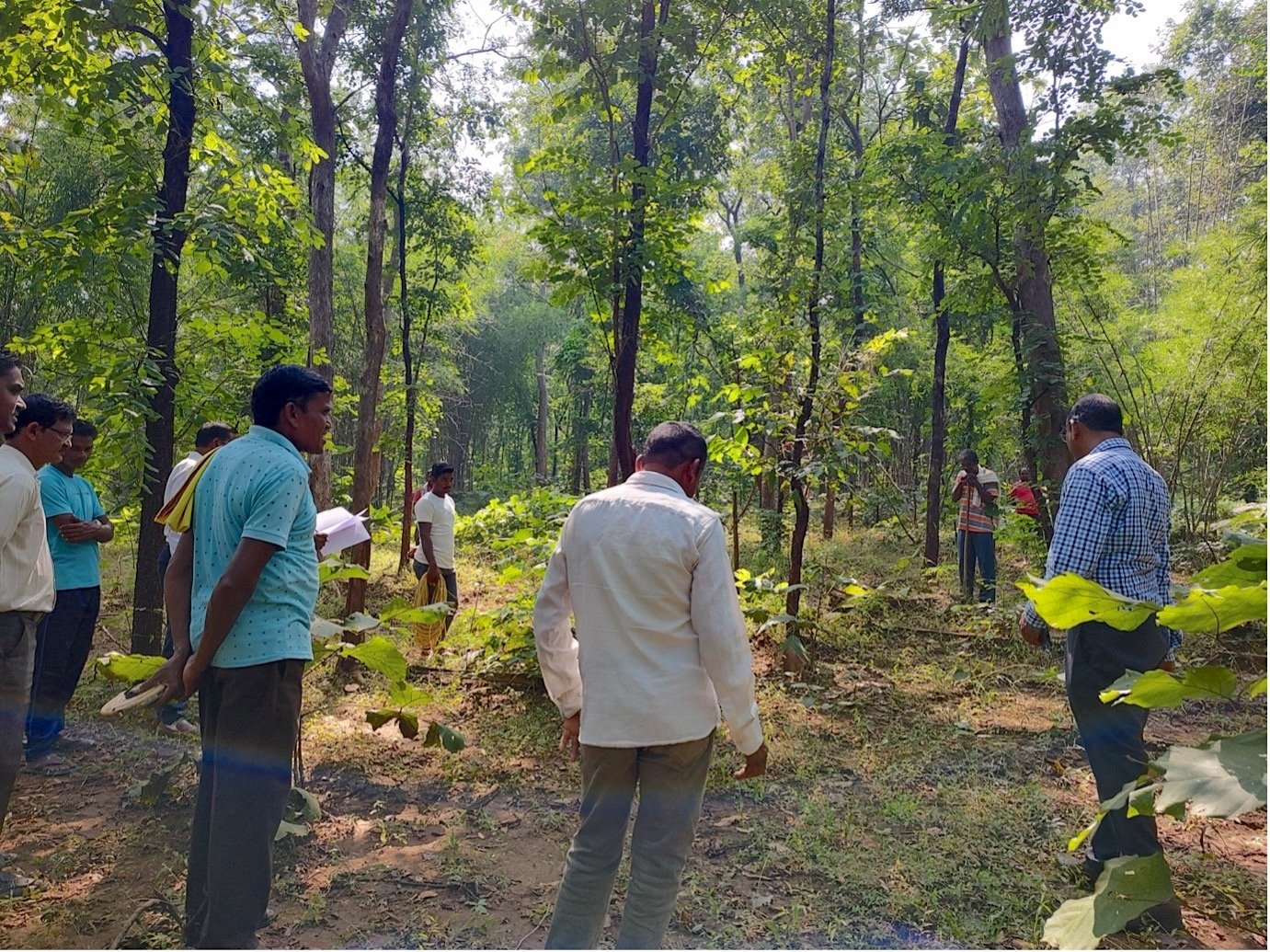 Community members from a village in Maharashtra conduct a forest survey in November 2022 to identify trees and species important to biodiversity as part of preparations for a management plan (Image: Sushmita)

“When the recognition of forest rights was considered a pre-requisite for forest diversions, it potentially allowed for decentralised decision-making, a standard which does not find the necessary legal backing in the central Forest Conservation Rules anymore,” said Kohli.

On 10 July, India’s environment minister Bhupender Yadav asserted that “No rule or provisions of any Act are being diluted”. A similar statement by the minister of state of the MoEFCC on 28 July said that “The Rules do not inhibit the commencement of processes envisaged in other laws.”

However, the same MoEFCC statement said that compliance with other laws such as the Forest Rights Act “should be done before handing over forest land to the user agency” – and then by the authorities, underlining the top-down decision-making inherent in the new rules.

If it’s a question of saving the forests, then there are strong recommendations within the Forest Rights Act

Roma Malik, a leading figure in the All India Union of Forest Working People (a national union of adivasi and Dalit communities), said that communities’ say in deciding development projects will be compromised by the new rules.

“Any changes in any of the conservation laws should be compatible with the Forest Rights Act and at equal standing. If it’s a question of saving the forests, then there are strong recommendations within the Forest Rights Act,” she said, questioning why implementation of the Act hasn’t been stronger.

A second major issue in the new rules concerns ‘land banks’ – large tracts of land kept under government or private control for future use. Land banks are often identified as areas where new forest can be grown to compensate for the use of forested land somewhere else, in the name of Compensatory Afforestation.

If forest land is degraded or developed in one area, the same area needs to be created on non-forested land (or double the area if degraded forest land is to be restored) – which the developer has to pay for.

A land bank refers to a large tract of land kept under government or private control for future use. It can include community common lands, revenue forest land or degraded forests, which can be reserved in the name of Compensatory Afforestation to be carried out in the future. Many land banks are created despite the existence of commons’ rights to the land.

“The main difference [from other past provisions that mention land banks, such as the 2016 Compensatory Afforestation Fund Act (CAMPA Act)] is the diminished role of the gram sabha,” said Arpitha Kodiveri, adjunct professor at New York University, who specialises in environmental law. “Under the [earlier] rules, when the money is deployed or activities take place, the gram sabhas have to be consulted. In this case, there is a straight-up assumption that everything is reconciled and one can carry forward with the Compensatory Afforestation.”

Kodiveri, who has studied land banks, adds that “the challenging part is in the way it is assumed that the government already has an existing land bank. How they have that bank is unclear… In many parts of the country, land banks are already created on common lands, which indigenous communities use for various purposes.”

Moreover, in heavily forested hilly states or union territories, the rules say, Compensatory Afforestation or a land bank “may be taken up in another State or Union territory” where forest cover is less than 20%. This has particular implications for Himalayan regions: numerous studies have indicated that land for Compensatory Afforestation is hard to come by in places like Himachal Pradesh or Arunachal Pradesh. This means that afforestation will not take place in the same ecology as the forests that are being cleared.

The new rules will impact not just forest-dwelling communities, but may also have implications for India’s climate goals. In its Nationally Determined Contribution, India has pledged to “create an additional carbon sink of 2.5 to 3 billion tonnes of CO2 equivalent through additional forest and tree cover by 2030”.

Campaigners point out that communities will be key to achieving this ambition and regenerating degraded forests. Soumitra Ghosh of the All India Forum of Forest Movements (AIFFM), an indigenous rights campaign group, said empowered local communities are vital in safely managing development projects without endangering forests further. 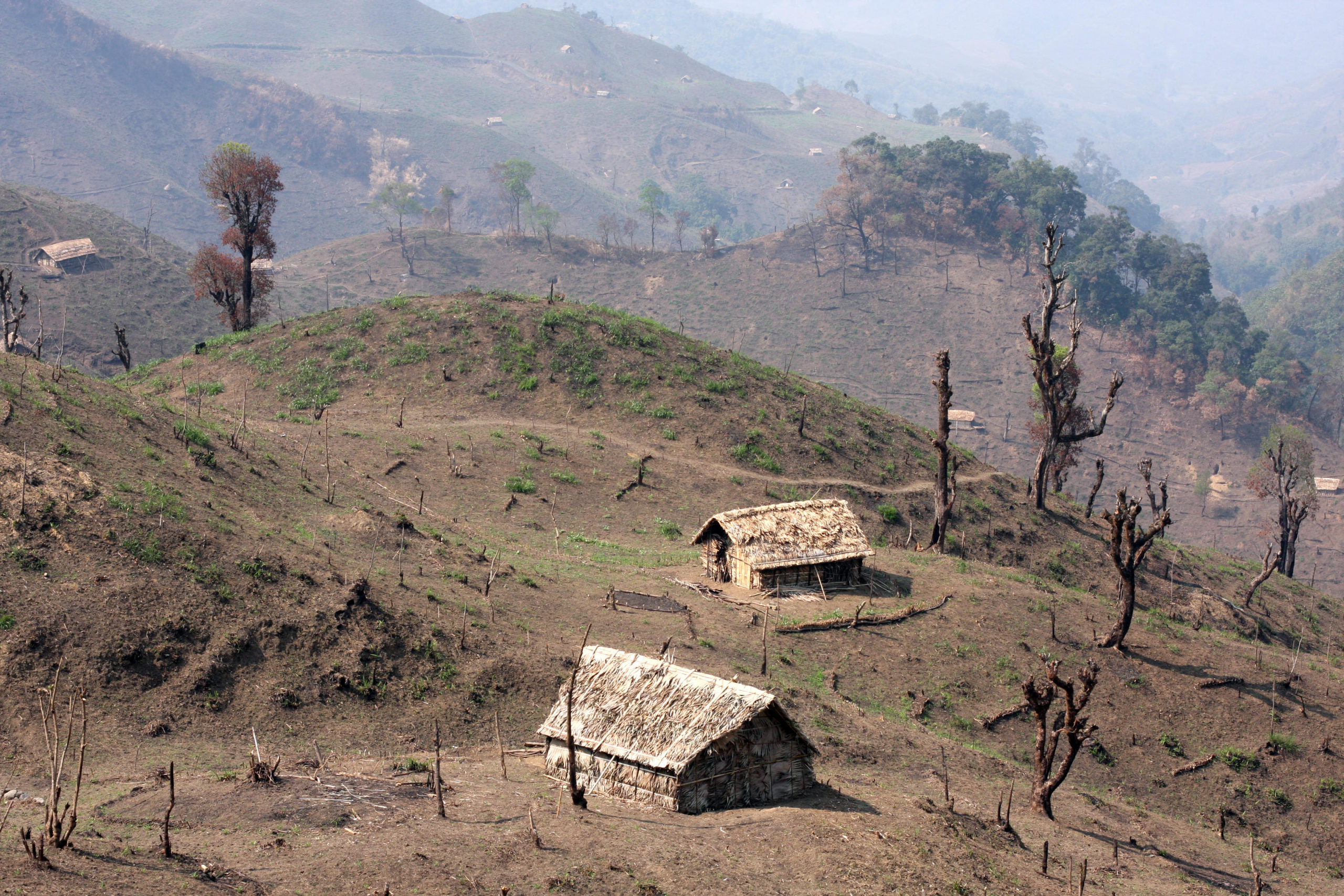 Deforestation in Nagaland, near the border with Myanmar. Himalayan forests are some of the most depleted in the world. (Image: Lucy Calder / Alamy)

“The loss and creation of forests are intrinsically linked with how procedures for forest land diversion are enforced,” said Kohli. In regions like the Himalayas and the coasts, which are already experiencing problems and disasters linked to climate change, she said the participation and decision-making of communities over land is especially important.

The Third Pole was also told that, as forests are increasingly seen as carbon sinks, both nature and communities suffer.

CR Bijoy, who is involved in the Campaign for Survival and Dignity, which had a crucial role in the enactment of the Forest Rights Act, said the mountain regions are being targeted in particular. Both forest diversion and afforestation, he said, “irrevocably change the mountain ecology, and land use where local communities are excluded, livelihoods imperilled and the conservation agenda derailed even as the conservation aristocracy applauds the climate action efforts.”

Dash, the legal expert associated with Community Forest Rights – Learning and Advocacy, called for the new rules to be suspended. “Previous legal processes should be restored and gram sabhas’ consent must be mandated before development projects are cleared,” he proposed.

Chipko 50 years on: Uttarakhand villagers describe how life has changed

Opinion: To save its forests, India needs local solutions, not greenwashing