Thirty years ago, Vanuatu first brought the harms being caused by climate change to the international community’s attention. As the chair of Alliance of Small Island States (AOSIS), in 1991 the South Pacific Ocean nation submitted a proposal to the Intergovernmental Negotiating Committee (INC), which was established by the UN General Assembly and charged with developing a framework convention on climate change.

In the past decade, the unrelenting efforts of civil society and increasing incidents of climate-induced disasters are finally starting to give the issue the recognition it warrants. Last month at COP26, the Glasgow Climate Pact recognised the importance of ‘loss and damage’ under the United Nations Framework Convention on Climate Change. It contained the strongest wording yet seen on loss and damage in a COP decision.

What is loss and damage?

Global warming is changing the environment. The impacts include more frequent and intense floods, heatwaves, storms and sea level rise. In response to some of these adverse impacts, people can adapt to their changing environment. But in many instances, adaptation is impossible: lives are lost, embankments broken, land rendered infertile, habitat changed permanently and livestock killed. The social and financial impacts of climate change that cannot be avoided are referred to as ‘loss and damage’.

This recognition came in the wake of a year in which global headlines were dominated by extreme weather. Spain and the US endured one of the heaviest snowstorms on record. Devastating floods hit the UK, Germany, India and China. There were supercharged storms in Indonesia, an unprecedented heatwave in Canada and deadly wildfires in Europe and Turkey.

Ironically, the most high-profile extreme weather events this year overwhelmingly hit rich nations, which previously thought that climate impacts are mainly the problem of the developing world. But developed countries have largely benefitted from early industrialisation and natural resource extraction. They therefore have the technology and financial resources to tackle the impacts of erratic weather patterns and disasters fuelled by climate change.

Poorer nations, meanwhile, have limited resources to recover from climate disasters. By 2030, climate-induced loss and damage in developing countries is estimated to cost USD 290-580 billion.

The situation is alarming, and the world’s leaders need to act now. Yet COP26 ended without a concrete measure in place to deliver finance for damage caused by the impacts of climate change. Developing countries, representing over 85% of the world’s population, proposed that a loss and damage finance facility be set up. This was unapologetically snubbed by rich countries, which are primarily responsible for the climate crisis.

What happened at COP26 on loss and damage?

Months before the Glasgow climate summit, Climate Action Network (CAN), a global network of more than 1,500 civil society organisations in over 130 countries, declared that loss and damage will be the “litmus test” to judge the success of the conference – despite the issue not being on the official COP26 agenda. CAN worked with its members and allies, such as the Loss and Damage Collaboration, Loss and Damage Youth Coalition and COP26 Coalition, to mobilise civil society, inform the media and influence key negotiators to prioritise the issue.

At the start of the conference, Nicola Sturgeon, the first minister of Scotland, pledged a symbolic GBP 1 million fund to help developing countries deal with loss and damage, breaking the taboo around the issue. Days later, she doubled the amount, emphasising that “finance is key to this – not as an act of charity but as an act of reparation”. She called on world leaders to “step up in Glasgow, let the rich countries start to pay their debt to the developing and vulnerable countries across the world”. 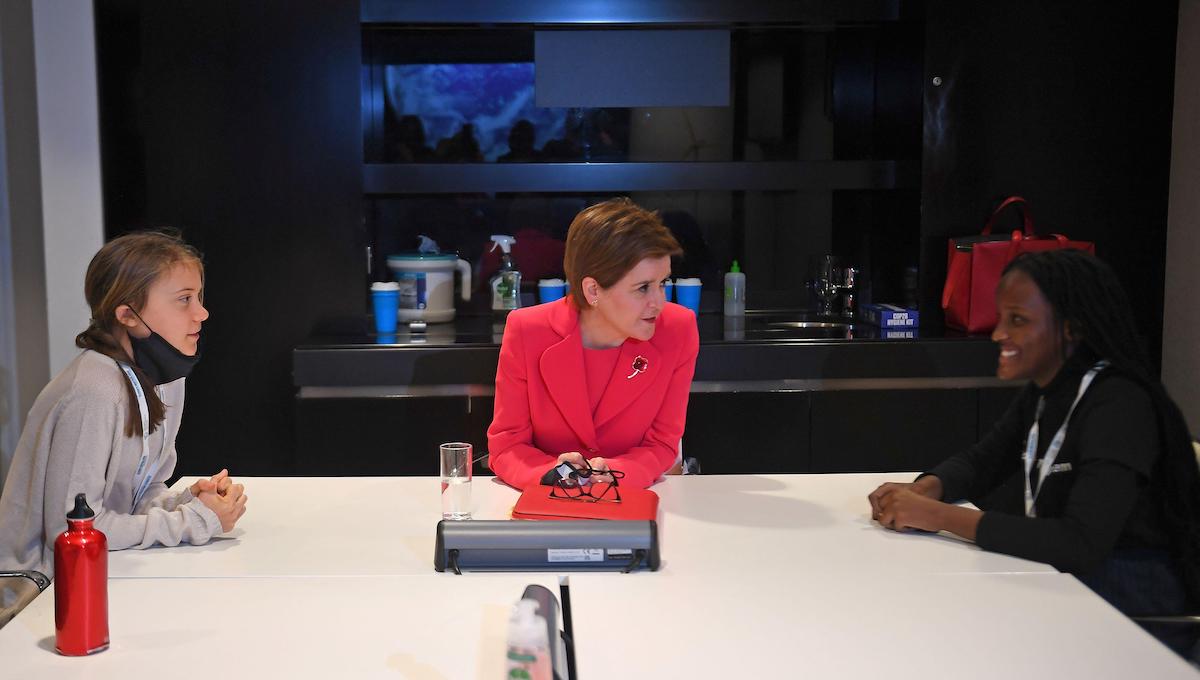 A proposal to establish the ‘Glasgow Loss and Damage Facility’ as a standalone facility under the financial mechanism of the convention was developed by AOSIS with support from the Least Developed Countries Group. It was later adopted by the group of all developing countries, known as G-77 and China. The facility would “provide support to avert, minimise and address loss and damage… and to undertake work in 2022 with the aim of providing recommendations to the next climate conference (COP27) on its operationalisation.”

The US, along with Australia, Canada and the EU, strongly resisted the demand. In response, a group of philanthropic organisations led by the Children’s Investment Fund Foundation lent their support, issuing a statement and offering USD 3 million “in start-up assistance to support the objectives of the Glasgow Loss and Damage Facility”.

Just as the conference ended, Philippe Henry, climate minister of Wallonia, one of the three regions of Belgium, pledged EUR 1 million to “enable the most vulnerable countries facing losses and damage linked to climate change”.

So on one hand, there were acts of solidarity pledging financial support to affected communities in poor countries. But big countries, instead of setting up the loss and damage facility, insisted on the idea of a “dialogue” to be conducted between 2022 and 2024 to “discuss the arrangements for the funding”. This language was eventually adopted in the Glasgow Climate Pact.

The small island states bloc reluctantly accepted the outcome. They made a strong statement to COP26 President Alok Sharma: “AOSIS in the interest of reaching a consensus will accept the text as gavelled as it stands with the clear understanding that this dialogue is a key step towards the creation of a loss and damage finance facility. We firmly believe that the dialogue should lead to a conclusion that the new loss and damage finance facility will be adopted at the next COP.”

Frustrated history of loss and damage

There have been many frustrations in climate-vulnerable countries’ long fight to get loss and damage recognised in UN systems.

In 2015, rich countries agreed to recognise loss and damage as an issue distinct from adaptation on condition that a clause be inserted in a separate COP21 decision. This stated “that Article 8 of the [Paris] Agreement does not involve or provide a basis for any liability or compensation”.  A fear of unlimited liability pushed them to add this clause.

Developing countries helplessly agreed, hoping to make gradual progress on the issue, and expecting finance and other support from rich countries based on cooperation and solidarity. However, rich countries continued to block the demand to set up an expert group under the Warsaw International Mechanism for Loss and Damage to discuss the finance issue, let alone establish a new stream.

Pressure from civil society and the developing world pushed rich nations to set up an expert group on “action and support” in 2019, in Madrid. However, this had a limited scope.

Finally, in September 2021, Vanuatu asked the International Court of Justice to issue an opinion on the rights of present and future generations to be protected from the adverse impacts of climate change. It highlighted that the current levels of action and support for vulnerable developing countries within multilateral mechanisms are insufficient to respond to the catastrophic levels of loss and damage induced by climate change. Although advisory opinions issued by the court are not legally binding, they demonstrate moral authority and carry legal weight that can inform the development of international law.

The agreement establishes a Commission of Small Island States on Climate Change and International Law, creating a body for the development and implementation of fair and just global environmental norms and practices. It is also authorised to request advisory opinions from the International Tribunal for the Law of the Sea, an independent intergovernmental judicial body, on the legal responsibility of states for carbon emissions, marine pollution and rising sea levels.

In their closing intervention in Glasgow, developing countries again raised their unmet demand to set up a loss and damage finance facility, and insisted that it materialise at the COP27 climate conference, to be held in 2022 in Egypt.

As the impacts of climate change increase and intensify, if rich countries do not show solidarity and work cooperatively with developing countries, we are likely to see more legal cases filed against polluters. The aim will be to seek justice by holding them to account and making them pay for the damage caused.

Who should pay for damage associated with climate change – and who should be compensated?