On 7 May, as Pakistan reeled under an unusually long and severe heatwave, an ice-dammed lake burst in the Hunza valley of northern Pakistan. The flood swept away a historic bridge on the Karakoram Highway, destroyed six houses in Hassanabad village, agricultural land, orchards and two hydropower projects.

Despite the severity of the disaster, no lives were lost. This is because the flood did not take villagers by surprise.

The Shishper glacier started to surge back in 2018. As it has shifted, it has blocked the outlet of the neighbouring Muchuhur glacier, resulting in the creation and recreation of an ice-dammed glacial lake that bursts every year at the start of summer. This is one of the 33 most dangerous glacial lakes in the mountainous regions of Gilgit-Baltistan and Khyber-Pakhtunkhwa, according to Pakistan’s Ministry of Climate Change.

A glacier surges when ice in its lower layers melts faster than the top layers. Though surging is not common, when it does take place it happens in large glaciers as a result of sudden warming. As lower layers melt, a huge amount of ice sits on top of thawed ice and meltwater, causing the top layer to slip and move down the slope: a glacier surge. If the surge is strong, the top layer moves beyond the original snout (end of the glacier), and begins to melt quickly. This can lead to a flood.

A glacier typically melts drop by drop at the snout. Some of those drops percolate into the ground, others form a very small stream and then flow down the mountain slope. Ultimately those streams join to form a river. As global warming accelerates glacial melt, more water is released than the stream or the ground can hold. Meltwater accumulates at the snout, forming a glacial lake.

A glacial lake outburst flood (GLOF) is the sudden release of water from a glacial lake. First, the lake swells as glacial melt accelerates. The lake bursts when the weight and volume of the water can no longer be contained by its banks. This has the potential to do immense damage.

Last year, a similar outburst happened in late May, displacing about 20 of the 170 households in Hassanabad. This year, 16 homes were submerged or damaged. Despite the threat, there has been no loss of life since the glacier started to surge in 2018.

The saving grace has been the implementation in 2020 of an early warning system and continuous monitoring of the 1,300-metre-wide, 600-metre-tall Shishper glacier.

Farrukh Bashir, deputy director of the Pakistan Meteorological Department (PMD) in Gilgit-Baltistan, said that his department had been monitoring the glacier closely since the lake formed again this February, so it was able to accurately predict the outburst. Authorities were first alerted to a possible outburst in late April/early May back in February, he said. Threat warnings were issued on 27 April and 7 May. 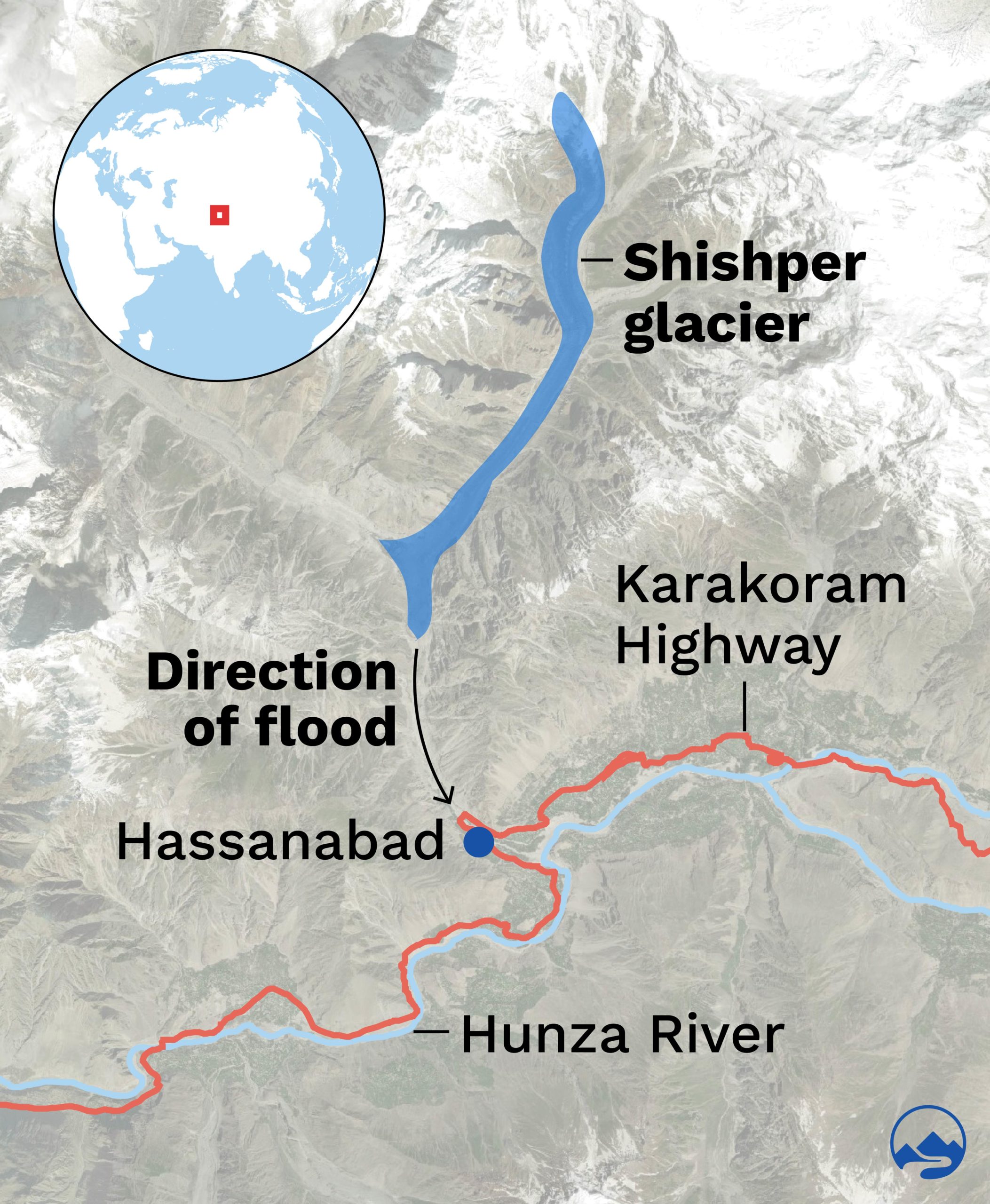 Map showing the proximity of the Shishper glacier to Hassanabad village • Graphic: The Third Pole

“We had informed all concerned authorities and communities about the crucial situation at least 24 hours before the outburst of the lake,” Bashir added.

“We managed to avoid as many losses as was possible,” said Jamil. He added that the Shishper glacier is dangerous because is so close to human settlements. At 4 kilometres from the highway and Hassanabad village, floods only take about 15 minutes to reach the village.

Having accurate and timely information about the threat meant the community could evacuate the dangerous areas and remove their belongings. “Some people even moved the structures of the houses that were threatened,” Jamil added.

How the early warning system at the Shishper glacier works

Muhammad Ali, assistant director at the Gilgit-Baltistan Disaster Management Authority (GBDMA) for Hunza district, said the organisation monitors the inflow and outflow of water in the lake every day. A camera installed at the glacier assesses how swollen the lake is, which is monitored remotely by the GBDMA.

Bashir said the PMD receives satellite images of the lake every 16 days, if there are no clouds. The changing chemical properties of the waters from the Shishper and Muchuhur glacier is also helpful in the PMD’s assessments. And teams from the district government regularly visit the lake.

The GBDMA also ensures that communities are prepared in the event of a disaster. “Training and awareness sessions and drills were arranged repeatedly for communities [before the 8 May flood] including women, youth, volunteers, senior citizens. These sessions focussed on efficient and quick responsiveness, search and rescue activities, first aid and camp management,” said Ali.

However, there is no automatic early warning system at the Shishper glacier, which would involve an automated siren issuing threat alerts. Ali said it is expected that the United Nations Development Programme’s GLOF-II project will install such a system by the end of this year.

What is the GLOF-II project?

The GLOF-II project is a joint initiative between Pakistan’s Ministry of Climate Change and the UNDP. Building on measures piloted by GLOF-I, the GLOF-II project is described by the UNDP as aiming to empower communities to identify and manage risks associated with GLOFs and related impacts of climate change, strengthen public services to lower the risk of disasters related to GLOFs, and improve community preparedness and disaster response.

The Third Pole asked the UNDP how many sites will receive automatic EWSs but had not received a response at the time of publication.

As a result of its monitoring work, the GBDMA now has data for the past three years on the Shishper glacier, allowing it to analyse changes to the glacial lake. According to the Pakistan Meteorological Department and GBDMA, less water accumulated in the 0.4-square-kilometre lake (an area equal to about 75 football pitches) this year than in previous years. However, the floodwaters were higher and pressure more intense: according to Ali, the lake took less than 10 hours this year to empty, compared with 72 hours in 2021. This year’s higher temperatures, he said, meant the glacier melted faster, weakening the lake’s embankments and it was breached at multiple points.

The Shishper glacier is one of the most frequently cited examples of the devastation that can be caused by glacial melt and GLOFs. At the launch of the new government’s taskforce on climate change, Prime Minister Shehbaz Sharif stressed the need to avert disasters from the Shishper glacier. In a statement, Pakistan’s climate minister Sherry Rehman referred to the Shishper GLOF as one of the severe impacts of climate change. She has also linked the disaster to melting due to high temperatures amid the ongoing heatwave in Pakistan.

But the problem extends beyond Shishper and the Hunza valley. According to the UNDP, due to rising temperatures, glaciers in Pakistan’s northern mountain ranges are melting rapidly, and 3,044 glacial lakes have developed in Gilgit-Baltistan and Khyber Pakhtunkhwa.

In May, local media reported that the large Passu glacier in Upper Hunza had started to melt rapidly, posing a serious threat to Passu village and another important bridge on the Karakoram Highway. The gushing water from the melting glacier damaged part of the bridge’s foundations. 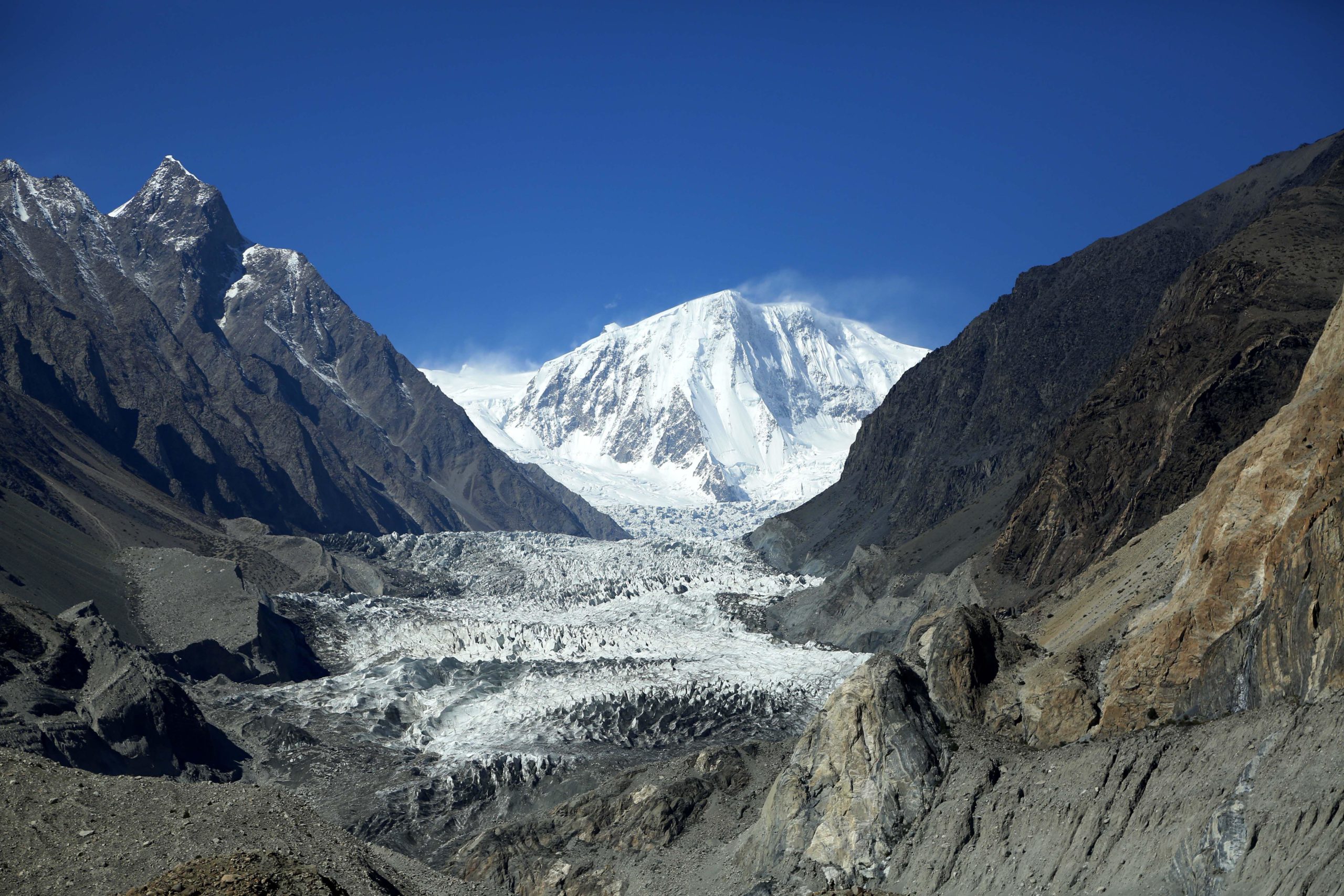 The Passu glacier in Gilgit-Baltistan, Pakistan, in October 2020. In May 2022, a sudden release of melted water from the Passu glacier damaged another bridge on the Karakoram Highway. (Image: Alamy)

One way to mitigate the danger is improved early warning systems. Muhammad Fahim, deputy director of the Pakistan Meteorological Department in Khyber Pakhtunkhwa, said that under the GLOF-II project three valleys in Chitral district have been selected for installing modern early warning systems. Fahim was hopeful that by the end of this year, these systems would be digitised and would provide accurate information to authorities and communities about threats. A project to upgrade the EWS in the Gollen Gole valley in Chitral is already underway.

Even the best early warning system cannot prevent all damage from GLOFs. This year in Hassanabad “some structural losses could not be avoided”, said farmer Tariq Jamil.

Jamil said he has suffered many losses since the Shishper glacier started to surge in 2018 – in total around 10 kanal of land (about 5,000 square metres) and 180 trees.

We cannot stop climate-related events, but we can mitigate their impacts

One of the biggest challenges posed by the Shishper glacier is the steep gradient of the terrain. Ali said that this means floods travel faster, with more potential to cause erosion. Floodwater and debris quickly reach residential areas, and protective enbankments cannot withstand the pressure of the floods, he said.

Shahzad Shigri, director of the Environmental Protection Agency for Gilgit-Baltistan, said that the region is climatically highly sensitive and prone to disasters, and needs climatic-resilient infrastructure to mitigate the impact.

“We cannot stop climate-related events, but we can mitigate their impacts and take adoptive measures by growing forests and reducing emissions,” said Shigri.

What record warm winters mean for glaciers in the Everest region

From Ladakh to Everest, risk of floods from glacial lakes grows