When its blueprint was unveiled just over a year ago, Xiong’an New Area was billed as a showcase for President Xi Jinping’s vision of high-quality urbanisation, a project that would be “crucial for the millennium to come”.

Green, innovative and state-of-the-art, Xiong’an has been heralded as a remedy to the “urban diseases” that plague China’s major cities: air pollution, water scarcity, and urban sprawl.

In a recent campaign to rally international support for Xiong’an, Wang Yi, China’s foreign minister, said it will be a model for the next century, a so-called “city of the future”.

As a testing ground for green urbanisation, the government has vowed that Xiong’an’s population will not outgrow the existing resources to support it. The city will be powered by “clean electricity”, which in China does not exclude natural gas. However, at least half the city’s power is expected to come from renewable sources.

With the aim of establishing Xiong’an as a new model for urban planning, the government wants to create a hub for high-tech industry, innovation, and sustainable financing. The city plans to make the most of its trillion-yuan investment for urban infrastructure during the next five years by using green finance to ensure transparency and positive environmental benefits. 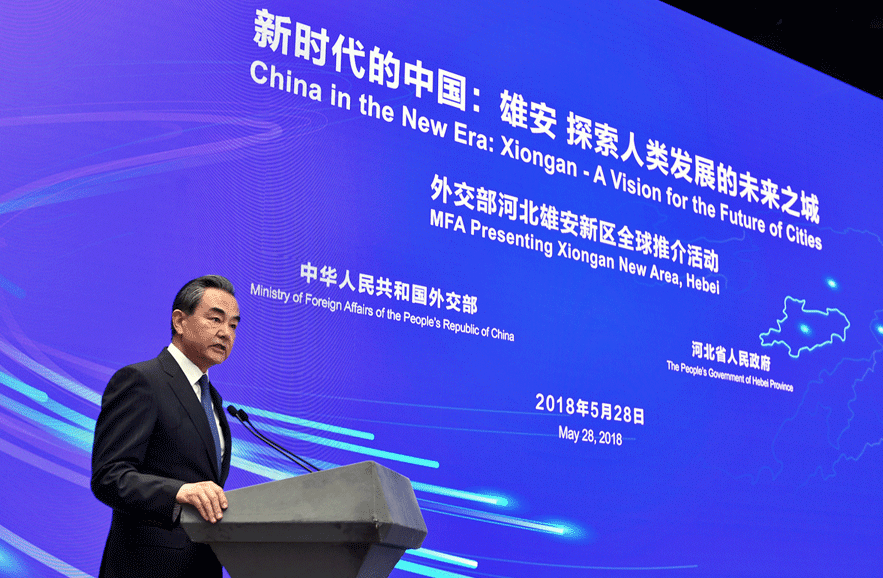 The making of Chinese ‘eco-cities’

China has never been short of experiments to develop green cities or regions. Yichun city in Jiangxi province announced its intention to become China’s first eco-city as early as 1986; while Guiyang, capital of Guizhou province in the south-west, became the first Chinese eco-city to focus on a waste-free circular economy as early as 2004, according to Austin Williams’ book China’s Urban Revolution: Understanding Chinese Eco-cities.

In 2008, Shanghai and the city of Baoding in Hebei province became the country’s first two low-carbon cities to foster less carbon-intensive industries and a greener way of life. The country also set up various green industrial zones to conserve energy and resources, cut pollution and rein in greenhouse gas emissions.

As Williams documents, the performance of these programmes has been mixed. Some cities have manipulated data and gamed appraisal systems. For instance, some eco-cities keep recorded levels of pollution down by only monitoring emissions within the urban centre, omitting industrial sites on the outskirts.

A recent assessment of officially designated Chinese low-carbon cities, jointly conducted by the Lawrence Berkeley National Laboratory and partners, concluded that: “Many cities still have carbon-intensive economies, and energy intensive industry,” and “have much work ahead to become green and low-carbon”. However, the authors acknowledged the progress made during the 12th Five-Year Plan period between 2010 and 2015.

Will Xiong’an be different?

China’s green city projects have been led by local governments but Xiong’an is mostly the product of central planning. The prime incentive to create the New Area was to take on some of Beijing’s “non-capital” functions and metropolitan burdens. It is officially designated as the heir apparent to China’s two urbanisation miracles, Shenzhen, and Shanghai’s Pudong New District.

But this only reinforces the top-down approach to planning. Cheng Li from the Brookings Institute argues that the New Area may serve as a very public gauge of the efficacy of the Xi administration’s policies.

More specifically, Xiong’an will be the first test case of the leadership’s ecological vision being applied to a mega-city, in which everything needs to be built from scratch in what was previously an economic backwater.

As part of its green initiatives, Xiong’an will become a testing ground for innovative green financing tools to fund projects to clean up local water systems, build energy-saving buildings and public transportation systems.

These projects are expected to require trillions of yuan in capital, according to Dr Ma Jun, chairman of the China Green Finance Committee, who led research on prospects for green financing of the New Area.
The report highlights the massive opportunity to try out unconventional financing mechanisms and to integrate sustainability from the start, presented by Xiong’an. The key to attracting both public and private financing, according to the report, is to make green infrastructure “bankable”.

“Green infrastructure investments in Xiong’an are large in scale and have a long investment payback period, with often unclear future revenue streams. This requires the exploration of innovative financing channels outside the government’s usual budget, harnessing the power of both the market and the state to nurture new business models and investment tools,” said the report.

The report authors also warn that the lack of financial know-how and experienced professionals in the area might be a major obstacle to achieving this green finance vision. Yet the expertise deficit at the local level does not seem to be creating much concern.

“It’s no longer Hebei province’s Xiong’an, it is China’s Xiong’an now. The country’s best players in green financing will soon join in to help. In fact, the ball has already started rolling as policy banks and other financial institutions are mulling over projects now,” said an industry insider who asked to remain anonymous.

Externally, a UK-China Centre for Green Finance, jointly set up by City of London and Ma Jun’s China Green Finance Committee, will also help to develop financial products to fund a number of projects in Xiong’an.

Charles Bowman, Lord Mayor of the City of London, said Xiong’an “has the potential to become one of the world’s most smart and sustainable cities”.

“I have seen this first hand,” Bowman said, having visited the area earlier this year, “I look forward to seeing how the new centre can lend support to the project”. 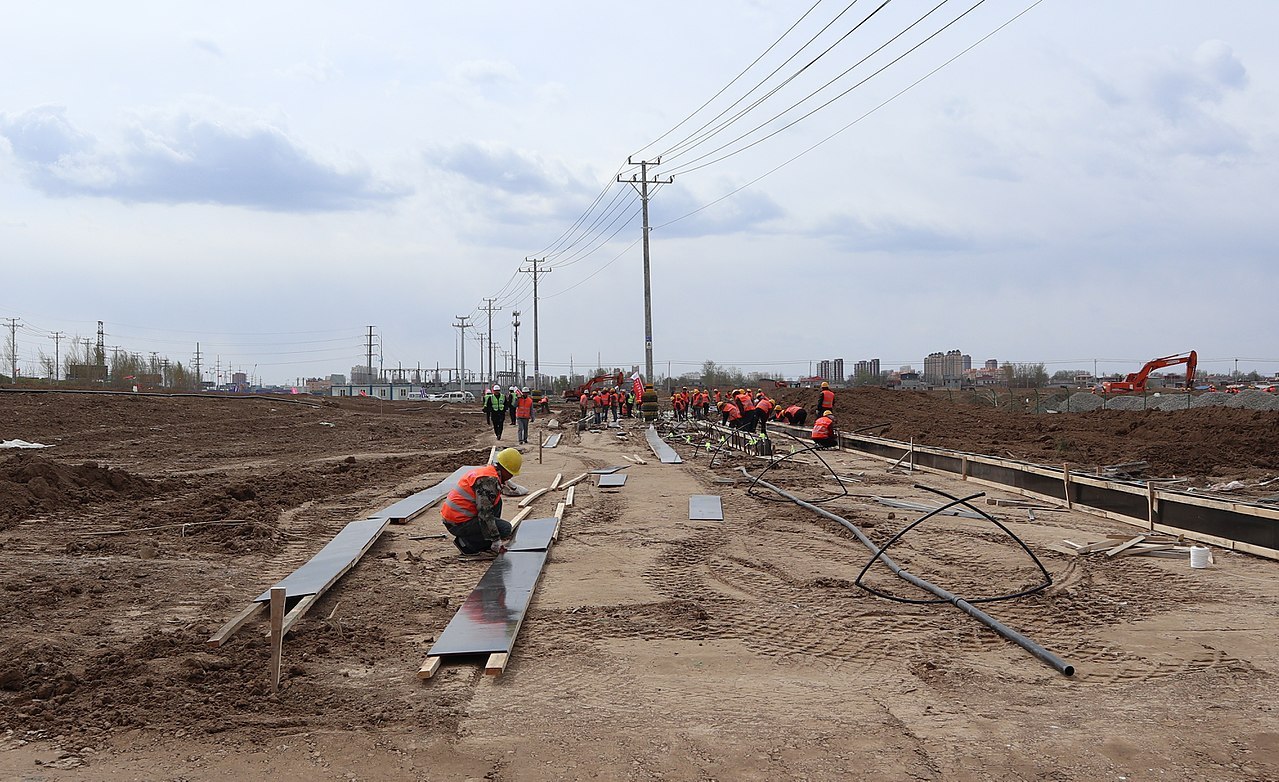 The plan for Xiong’an’s energy system is brimming with futuristic buzzwords. The State Grid Corporation said the city’s electricity supply will be 100% clean through “re-electronification”, a term coined by the state-owned power company to promote upgraded power grids, which can accommodate growth in energy storage technologies and the provision of renewable energy. Integrated solar PV systems, combined with energy storage units and electric vehicle charging are all listed as smart, clean power solutions for the New Area.

Electricity will take up about 52% of total energy consumption in Xiong’an New Area, the ratio will be higher than in many other metropolitan cities such as Paris and Tokyo. The city also plans to tap into its rich geothermal energy resource to provide heat, and supplement the use of natural gas and biomass energy, according to the master plan for Xiong’an’s development that was approved by the State Council in April.

Yet, locally generated electricity from renewable sources will only cover a small part of Xiong’an’s consumption. The lion’s share will be brought in through an ultra-high voltage transmission network from northern Hebei province and Inner Mongolia, which are both abundant in wind and solar power.

It is also worth noting that the definition of clean electricity does not guarantee low-carbon, renewable power. Government guidance for green bonds classifies regional gas-fired power generation as “green projects”. In the case of Beijing and Shanghai, which also receive a large share of electricity from other regions, the electricity is generated from fossil fuels.

Whilst the commitment to sustainable development is commendable, the real environmental benefits of Xiong’an’s green experiments are questionable considering the area suffers from chronic water scarcity and severe ecological degradation. Numerous small-scale but heavy polluting plants handling waste plastics, non-ferrous metals, tanning and garments have propped up the local economy.

“There are environmentally fragile hotspots in Xiong’an. Banks and financial institutes need to consider these social and environmental risks when developing financing products to fund projects there,” said the above-mentioned industry insider.

China’s existing criteria for projects eligible for a green label are yet to align with international standards, allowing projects with potential hazardous climate and environmental impacts to be classed as green. The country is expected to release an updated version of the appraisal criteria later this year.

In the long-term, Xiong’an will most likely face water stress. The Chinese Academy of Sciences has warned that the Xiong’an area is already suffering from severe groundwater depletion, although it borders Baiyangdian Lake, northern China’s largest freshwater wetland. Land subsidence caused by over exploitation of groundwater significantly worsened over the past decade in all three counties that make up Xiong’an.

Scientists also warn that changing weather patterns caused by climate change could worsen the situation between 2026 and 2046, when prolonged drought seasons are expected in northern China.

Although Xiong’an faces very particular challenges, the project could have wide-ranging impacts on the rest of China. As a key part of the leadership’s vision, Xiong’an will become a model for a new type of urbanisation in China. Along the same lines, Ma Jun with the China Green Finance Committee has said that the green finance experiments in Xiong’an could also spread. This includes along the Belt and Road Initiative, where China plans to fund and build infrastructure in developing countries across Asia, Europe, Africa and beyond.

Yet the unique political support, as well as the subsequent resources and expertise it has brought, may end up making Xiong’an an exceptional case that proves hard to reproduce elsewhere.

“In terms of green finance, I don’t think Xiong’an’s model could be replicated in other cities.” said Zhang with Greenpeace. For him, pilot programmes, such as those set up last year in Guangdong, Guizhou, Jiangxi, Zhejiang and Xinjiang, that lack the sort of high-level political blessing that Xiong’an has received are more accurate barometers of whether green finance can achieve widespread adoption.

Similarly, Xiong’an will have no problem meeting the clean electricity target because it can turn to imports,if needed, thanks its deep pockets and strong political backing. “Just like Beijing and Shanghai,” said Lin Boqiang, director of Xiamen University’s China Center for Energy Economics Research. He added: “As it is being built from scratch, Xiong’an will be an ideal place to experiment with fancy new concepts, such as smart grids and distributed solar power buildings. Yet, it is hardly replicable elsewhere”.

More generally, the creation of Xiong’an has been compared to predecessors elsewhere by Chinese academics and media commentators. For example to Milton Keynes in the United Kingdom and Tsukuba in Japan. Both were established in the 1960s with the aim of alleviating pressure on London and Tokyo. Tsukuba, in particular, had a similar ambition as Xiong’an to become a “pilot model city”, and a regional “technopolis” that clusters universities and research institutions. Yet neither was a complete success story. Some urban planners have argued that the rigid nature of central planning is not up to the task, whereas a less regulated and more open system brought about success in the case of Silicon Valley.

The Xiong’an experiment is being undertaken in a completely different political system from those of the UK and Japan, so it may tell a different story. It could be a few decades before we know for sure.